Underwater connectors are very essential and complex components of deep-sea engineering equipment and their design and manufacture have apparent multidisciplinary characteristics. Wet-mateable connectors (WMCs) represent the highest level of technology in this field, and only a very few countries in the world can produce WMCs. So, WMCs are likely to be a constraining factor to some maritime powers that might try to achieve breakthroughs in this field, constraining the innovation-driven development of deep-sea equipment.

When 70.8% of our planet’s surface is covered by oceans, it seems perplexing that the Earth is called “Earth” [1]. Today, we have more detailed maps of the surface of the moon, while we have just explored less than 20% of this vast underwater realm, only 5% in detail [2][3]. The ocean, with the deepest part of approximately 11,034 m, has abundant resources (e.g., minerals, living creatures, genes, renewable energy, space, etc.), which are essential sources for human beings to achieve sustainable development [4]. The strategic development and deep utilization of marine resources have become an important index to evaluate a country’s comprehensive national power [5]. As the frontier region of ocean exploration, the hadal zone (depth of 6000 to 11,000 m) has lured explorers for decades [6]. Within the range of this depth, we can call it veritable “deep-sea”.
Efficient technical equipment is fundamental for the effective exploration and utilization of this vast blue ecological system [7]. Many manned and unmanned submersibles have been developed, such as remotely operated vehicles (ROVs) [8], autonomous underwater vehicles (AUVs) [7][9][10], human-occupied vehicles (HOVs) [10][11][12][13], and hybrid ROV and AUV (HROV or ARV) [14]. Many undersea observatories have been built [15], such as the Hawaii Undersea Geo-Observatory (HUGO) [16] and the Astronomy with a Neutrino Telescope and Abyss environmental RESearch (ANTARES) project [17][18]. Various kinds of marine engineering equipment have also been deployed, to exploit oil and gas, as well as offshore renewable energy (ORE) farms.
For submersibles, cables and connectors are the vital power and communication channels, corresponding to our human blood vessels and nerves [5]. Underwater connectors are the “articulus” of cables, which makes them undoubtedly become one of the most significant components of deep-sea equipment. It seems that most unsuccessful underwater and offshore projects are due to connection failures [19]. Just as Paul G. Slade says, the obsolescence of connectors occurs not in one’s life, but within one’s recent memory [20].
Essentially, underwater connectors can be categorized into dry-mateable connectors (DMCs) and wet-mateable connectors (WMCs). As the names suggest, the difference between DMCs and WMCs is whether connectors can be mated and de-mated in the subsea environment [19]. WMCs can reduce the time and the cost of total productive maintenance (TPM), and can provide an effective solution for the expansion and networking of the deep-sea system [21]. Dry-mate and wet-mate are two completely different technical challenges, and only a very few countries in the world can produce WMCs. WMCs represent the highest level of technology in this field, and the whole market is monopolized by several companies. Due to technical blockage by several developed countries, WMCs have become one of the 35 bottleneck techniques announced by China’s Science and Technology Daily in 2018.
To the authors’ knowledge, only one review paper on underwater connectors, written by Rémouit et al. [19], has been found. This paper provides a detailed overview of underwater electrical connectors, including a brief history, the main commercial types, and basic design principles. However, underwater optical connectors are not focused on in that paper, but they are normally the most difficult challenge. Furthermore, the key technologies of underwater connectors should be distilled from the main available top commercial off-the-shelf (COTS) products.
This paper aims to give a review on the state-of-the-art of underwater connectors, including both electrical and optical. As a result of the complicated structure of underwater connectors, the concept of functional units is proposed by the authors, which could be helpful for a better understanding of underwater connectors and the classification of their key technologies.
This paper consists of six parts after this introduction. In Section 2, the background of underwater connectors is introduced; the main available top COTS products are presented; and the concept of functional units of underwater connectors are proposed. Section 3 elaborates on the basic knowledge of electrical contacts and optical connections. Section 4 presents some basic types of sealing and pressure-balanced designs of underwater connectors. Section 5 introduces the aligning and locking structures of underwater connectors. Section 6 contains some discussions and conclusions.

Figure 1. A basic 3D CAD view of an underwater electrical connector: (a) receptacle and (b) plug.

The history of underwater connectors can be traced back to 1858, when the Atlantic Telegraph was installed successfully after many setbacks. It was the first telegraph communication in the world, which gave birth to underwater electrical connectors. This is why Rémouit et al. think that underwater connectors have more than 150 years of history [19]. However, connecting the two electrical cables for underwater application in the early days was accomplished in some makeshift ways, for example, splicing the two parts of the conductors together with tubing rubber over the junction [25].
Prior to the Second World War, there was no imperative requirement to produce special connectors for underwater application [26]. Until the early 1950s, the first underwater electrical connector was invented and then soon formed a market. The first connectors were dry-mateable RM and rigid-shell connectors, which are still in use today with their original forms [19]. So actually, underwater connectors may only have a short history of about 70 years. Since then, the needs of underwater electrical connectors have grown rapidly in response to both military and oil industry applications [25]. In the 1960s, the wet-mateable PBOF connectors were introduced, which greatly improved their reliability and functionality, making the market substantial [27]. Furthermore, during this period, engineers began to study how to apply the powerful optical fibers to the underwater system [28]. In the 1970s, the IC connectors were created, but they were never widely used due to the limitations of power and bandwidth [26]. During the 1960s and 1970s, the Golden Age of human exploration in the deep-sea, pushed by oil exploration by the United Kingdom and Norway under the North Sea, the market of underwater connectors grew rapidly once again [29]. In the 1980s, the first optical WMC was invented, and meanwhile, the optical DMCs were offered commercially. In the 1990s, the hybrid WMCs were developed by Ocean Design Inc. (ODI), which combined the best technologies [26].
By the time of the 21st century, thousands of different products with mature technologies were offered in the market worldwide [19]. Each manufacturer has its own unique technologies, and this will be illustrated next. Nowadays, the development of communication engineering has a hectic pace, which attracts researchers to design noncontact underwater connectors. Based on the ideas of IC connectors, modern transmission technologies (e.g., Bluetooth, Wi-Fi, optical infrared, acoustic modems, radio frequency, etc.) were increasingly applied to realize the wireless connection of data transmission in underwater application. However, these connectors will not be a concern of this paper, and can be found in the related references [24][30][31][32][33][34][35][36].

Today, the globally famous vendors of underwater connectors include Tyco Electronics (TE) Connectivity Ltd. (has acquired SEACON), MacArtney Underwater Technology Group, Teledyne Marine Group (has acquired ODI), and so on. Table 1 lists the main specifications of some first-class WMCs of the above three manufacturers.
Table 1. Main specifications of some first-class WMCs of globally famous manufacturers.
The SEACON Group (founded in 1964), a leading provider of underwater connector technology and systems, has more than 50 years of history. In the 1970s, SEACON began to supply underwater electrical connectors [37], and in the 1980s, SEACON introduced the MINI-CON electrical DMC with great success, and developed its electrical WMCs in the 1990s. Among them, the ALL-WET can be operated in full-ocean-depth (FOD) conditions, while the HydraElectric, a follow-up product, adopted the design of PBOF and shuttle pins. At the same time, the first optical WMC Hydra Star was also introduced, and its improved version the HydraLight (Figure 2) came out in 2000. SEACON used the design of ultra-physical contact (UPC) and angled-physical contact (APC) in the HydraLight, which can greatly improve the performance of the optical fiber connection. The innovative third generation of underwater optical connectors G3 was put into the market in 2010. Then, SEACON combined the advantages of the HydraLight and the G3 to produce the High Capacity Optical WMC (Figure 2) whose number of contacts increased six times at the same size of last generation [28]. In 2014, SEACON was acquired by TE Connectivity, another world leader in connectivity.

Figure 2. The SEACON HydraLight Optical WMC and the High Capacity Optical WMC [28].
The MacArtney Group is a global supplier of underwater technology products and systems and was founded in 1978. Its most famous brand of underwater electrical connectors may be the SubConn® (Figure 3) of SubConn Inc., which has almost 40 years of history. The most representative and recognizable feature of the SubConn® connector is its red cap. The low-end series of the SubConn® Circular has big sales in the global market. Another well-known brand of underwater optical connectors is the OptoLink (Figure 4), and the multi-mode and single-mode optical fiber connectors were developed in 1986 and 1996, respectively. The distinctive technology of OptoLink is its optical connection type with expanded-beam ball lens. The lens protects the end-faces of the optical fibers, which is convenient for fiber cleaning and assembling.

Figure 4. The OptoLink Fiber Optic Connector [38].
The Teledyne Marine Group is a leading-edge underwater technology company. In 2009, Teledyne Marine acquired ODI, an old brand of underwater systems, which became Teledyne ODI. The NautilusTM WM1.7-30 (Figure 5) is a famous electrical WMC of Teledyne ODI, which took the design of the PBOF and shuttle pins with wiping action. The Angled Physical Contact Rolling Seal Hybrid (APC-RSH) of Teledyne ODI is an advanced optical WMC, which employs the rolling seal design and APC technology. Teledyne ODI also combined the advantages of NautilusTM and APC-RSH to develop the NautilusTM Rolling Seal Hybrid Connector (NRH) (Figure 6). Furthermore, Teledyne Marine also has its own brand of underwater connectors: Impulse. The Optical 12,000 Meter Connector of Impulse-PDM (Figure 7) has been qualified for FOD operation, but it belongs to DMCs. 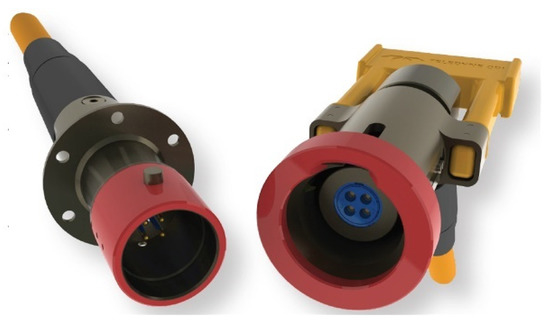 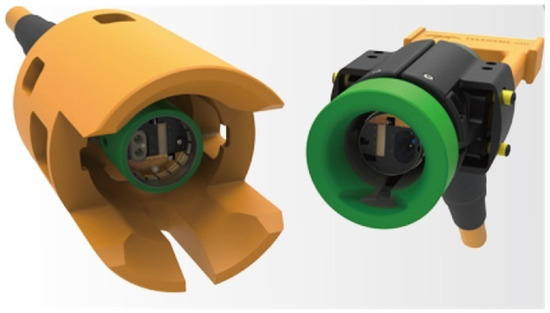 (1)
Connecting Unit provides the reliable and stable transmission of electricity or optical signal (or both) between plug and receptacle connectors with the desired specifications, when underwater connectors are in the mating state. The connecting unit is the primary functional unit, whose design is demanded not only to guarantee the stability and security of connections but also to reduce power loss on contact interfaces as much as possible.
(2)
Sealing Unit can provide enough water sealing performance for the underwater connectors. The sealing unit could be the most important functional unit, which should maintain a clean, stable and safe environment to the connecting unit. The sealing unit should prevent seawater, sediment, grit and any other contaminants from entering the interior of connectors, and prevent the oil leakage of PBOF connectors as well.
(3)
Pressure-Balanced (or Pressure-Compensated) Unit can produce an internal pressure to balance the ambient pressure automatically, reduce or even eliminate the differential pressure between the internal and the external of underwater connectors. An excellent pressure-balanced unit should have good reliability and sensitivity.
(4)
Aligning Unit aligns the electrical and optical connection to improve the quality of connection by its mechanical structure. It is an important functional unit to realize low power loss of underwater connectors, especially for optical connectors.
(5)
Locking Unit locks plug and receptacle connectors to improve reliability, stability and quality of connection after mating. The locking unit should be flexible to mate or de-mate the connectors.

It is necessary to emphasize again that all the above functional units are not independent; thus, the structural relationship between each of them must be fully considered in their design. The key technologies of each functional unit are discussed next.