Foods in Prevention of Atherosclerosis

Noncommunicable diseases (NCDs) are considered to be the leading cause of death worldwide. Inadequate fruit and vegetable intake have been recognized as a risk factor for almost all NCDs (type 2 diabetes mellitus, cancer, and cardiovascular and neurodegenerative diseases).

The principal cause of death worldwide is cardiovascular disease (CVD), being the leading cause of death in developed countries [1]. The World Health Organization (WHO) estimated 17.7 million deaths were due to CVD in 2015, representing 31% of all causes of death [2].
Atherosclerosis is the main cause of CVD. It is a chronic, generalized, and progressive disease, which results from a chronic inflammatory process that affects the arteries of different vascular beds and is characterized by thickening of the intimate layer and a loss of elasticity in half of the cases [3]. Both oxidative stress and systemic inflammation can be modified by a healthy lifestyle, including a healthy and balanced diet, physical activity, moderate alcohol consumption, and stopping tobacco use [4][5][6].
On the other hand, according to the WHO, in 2017, an estimated 3.9 million deaths worldwide were attributable to inadequate fruit and vegetable (F/V) consumption [7]. Moreover, noncommunicable diseases (NCDs) such as type 2 diabetes mellitus (T2DM), cancer, and heart disease are collectively responsible for over 70% of all deaths worldwide, that is, 41 million people [8]. Indeed, all NCDs are known to present low-grade inflammation that characterizes these pathologies with high concentrations of some inflammatory biomarkers.
It is known that F/V are good sources of dietary fiber, vitamins, minerals, and many non-nutrient substances that are beneficial for our health, such as flavonoids, plant sterols, and other antioxidants [7]. Taking into account the nutritional composition of F/V, they should make up a large portion of our diet. In fact, the WHO and other health organizations recommend increased intake of F/V (≥400 g/day) to improve overall health and reduce the risk of NCDs, which include illnesses such as heart disease, cancer, diabetes, and obesity, as well as for the prevention and alleviation of several micronutrient deficiencies [7].
Adequate F/V intake as a part of a healthy dietary pattern has been demonstrated to reduce the prevalence of the most frequent NCDs such as T2DM, CVD, obesity or metabolic syndrome (MetS), which are risk factors of CVD [9]. This is due to the potential properties of the phytochemical content of F/V (Figure 1) such as antioxidation, inflammatory biomarkers modulation, anti-platelet and anti-aggregation, as well as improvement of the lipid profile, glucose metabolism, and blood pressure [10][11]. Thus, an adequate intake of F/V as part of the daily diet may reduce the risk of some NCDs including CVDs, certain types of cancer [7], and all-cause mortality [12][13]. Inverse associations have also been observed between the intake of F/V separately and combined and the risk of coronary heart disease (CHD), stroke [14], and CVD [12]. 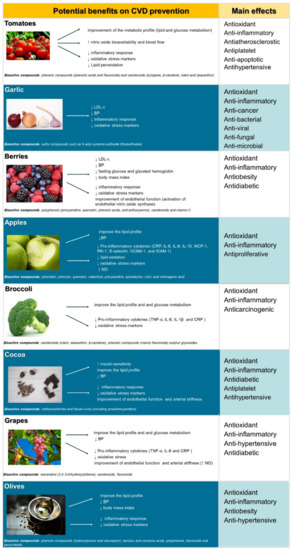 Figure 1. Summary of the potential health benefits of the main bioactive compounds contained in fruits and vegetables mentioned in this study.
According to Scicchitano et al. [15], to date, there is vast scientific evidence about the effectiveness of nutraceuticals against the development of CVD and in reducing the burden of the atherosclerotic process. Nevertheless, how these nutraceuticals exert their positive action on the cardiovascular system is not yet known. It should be highlighted that the positive health effects of these bioactive compounds have mainly been based on observational, in vitro, and in vivo studies [15]. While there is sufficient in vitro evidence supporting the antioxidant, anti-inflammatory, and antidiabetic effects, among others, of allicin, flavonoids, or stilbenes, the in vivo studies available have reported controversial results, indicating that further research are required. To demonstrate and corroborate the results observed in these in vitro and in vivo studies, large controlled clinical trials are needed in humans [15][16][17][18][19]. To know the underlying mechanisms involved in the absorption of different biocompounds according to the health status of the individual, ethnicity, sex, or age, as well as the possible bioavailability, degradation, metabolism, and excretion of this individual should be studied since this might partly explain the differences observed among studies performed. In this context, and according to Castro-Barquero et al. [20], gut microbiota plays a key role in the metabolization of dietary polyphenols. Gut microbiota can modify the absorption, bioavailability, and biological activity of dietary polyphenols, which may explain the contradictory results obtained among the different studies.

One point to consider in this review is dietary polyphenol intake. In Mediterranean countries such as Spain, Greece, Italy, or the South of France, the intake of total polyphenols is around 1011 mg/day in comparison with the United Kingdom (1521 mg/day) and non-Mediterranean countries (1284 mg/day) [20]. According to Zamora-Ros et al. [21], flavonoids (49–62%) represent the highest intake of total polyphenols in Mediterranean countries, followed by phenolic acids (34–44%), lignans (0.3–0.5%), and stilbenes (0.1–0.5%). On the other hand, tomatoes and tomato-based products make up the highest contribution to dietary lycopene intake (15–55%) in European countries [22]. Fruits are the main food source of flavonoids (around 45%), while wine is the main source of stilbenes [21].
On one hand, with regard to the habitual intake of polyphenols, it has been reported that total polyphenol intake is 664 mg/day, of which the weighted dietary mean intake of phenolic acids is 363 mg/day, being 259 mg/day for flavonoids [20]. The dietary intake of anthocyanins has been estimated to be around 11.6 mg/day for individuals aged ≥20 years [23]. The average range of flavan-3-ol intake (a subclass of flavonoid) was also estimated to be 180 to 600 mg per person per day [24], while the mean intake of proanthocyanidins is around 95 mg/day in the American population [25], and stilbenes intake, as a sum of resveratrol and piceid, would be between 0.933 to 4000 µg per person and day [26].With respect to hydroxytyrosol, its estimated consumption per day in Spain has been estimated at 5.6 mg (0.3 mg from extra virgin olive oil (EVOO) and 5.3 mg from olives) considering an average consumption of EVOO and olives of 15 g/day and 7 g/day, respectively [27]. Hydroxytyrosol has a bioavailability of 99%, making it easily is integrated into our organism. Therefore, it has been reported that a daily intake of 5.6 mg of hydroxytyrosol could exert great benefits for the human body [27].
On the other hand, Burrows et al. [28] reported that the mean intake of the most common dietary carotenoid, lycopene, is of 4555.4 µg/day. Finally, there is no standard available for the intake of garlic. On one hand, it has been suggested that health benefits can be observed after a daily intake of 1–2 cloves garlic or around 4 g of whole garlic, but there is no scientific reference to support this [29]. Other authors have reported that an average daily dose of dehydrated garlic powder of 900 mg/day has health benefits, although according to several studies the effectiveness of aged garlic extract (AGE) on immune enhancement in humans varies from 1.8 to 10 g per day [29].
Finally, Sones et al. [30] also estimated the average daily intake of total and individual glucosinolate content in both the fresh and cooked cruciferous vegetables using data from the 1980 National Food Survey in the UK. Thus, they reported that the mean daily intake of glucosinolates was 6.7 mg/day of oxazolidine-2-thiones and 17.7 mg/day of thiocyanate ion. Although the estimated daily intake of total glucosinolates was 75 mg/day, the authors also reported that certain individuals could have consumption higher than 300 mg total glucosinolates per day.

According to the evidence currently available, various fruit and vegetable bio-compounds (flavonoids, sulfur, quercetin, allium, stilbene, etc.) seem to exert numerous benefits against atherosclerosis, whether consumed as whole fruits and vegetables and their bioactive compounds or as supplements. Nevertheless, while many factors might explain the differences between the studies that failed to demonstrate the possible benefits of the direct action of the bioactive compound of a food consumed, the usual dose of these foods may be very different from the dose actually needed to achieve any beneficial effect.
Although there is currently a large amount of scientific evidence regarding the benefits of F/V against chronic inflammatory diseases such as T2DM, cancer, or CVD, the highest level of evidence should be based on the results of well-designed, large, long-term RCTs.
Therefore, before F/V can be proposed as a tool to aid in the prevention of NCDs such as MetS, obesity, cognitive disorders, or the risk of mortality, more clinical trials are needed to confirm their potential beneficial effects.