Mitochondrial energy metabolism is maintained through oxidative degradation of proline and that this process is important in regulating the longevity of yeast cells.

Aging is a progressive decline in biological functions occurring in all living organisms, ultimately leading to cell death [1]. Organisms are exposed to various environmental stresses (e.g., nutrient starvation, oxidative stress, temperature shift) during their lifespan and aging is associated with homeostatic imbalances in the form of reduced capacity to respond to various stresses [2][3]. Molecules that work to maintain cellular homeostasis are essential for longevity.
Proline is a multifunctional amino acid in organisms. In addition to being a proteogenic amino acid, proline functions as a stress protectant, namely an osmolyte, oxidative stress protectant, protein-folding chaperone, membrane stabilizer and scavenger of reactive oxygen species [4][5][6][7]. In short, proline is known to be important in maintaining cellular homeostasis by protecting cells from various environmental stresses. Thus, the metabolic regulation of proline, including biosynthesis, degradation and transport, has been of great interest. In the budding yeast Saccharomyces cerevisiae (S. cerevisiae), proline is synthesized from glutamate by three cytoplasmic enzymes, the γ-glutamyl kinase Pro1, the γ-glutamyl phosphate reductase Pro2, and the Δ1-pyrroline-5-carboxylate (P5C) reductase Pro3 [8][9]. In most eukaryotes, including yeast, proline is degraded predominantly in mitochondria. The mitochondrial proline oxidase Put1 converts proline into P5C, which is then converted to glutamate by the P5C dehydrogenase Put2 [10][11]. Proline oxidation by Put1 on the mitochondrial inner membrane may result in the generation of electrons that are then donated to the mitochondrial electron transport chain (ETC) through flavine adenine dinucleotide (FAD) to generate ATP [12][13]. PUT1 and PUT2 are regulated by the transcriptional activator Put3. Although Put3 is constitutively bound to the PUT1 and PUT2 promoters, Put3 is maximally activated for upregulation of PUT1 and PUT2 only in the presence of proline and in the absence of preferred nitrogen sources [14]. In addition to the transcriptional regulation of proline metabolisms, excess proline also inhibits the enzymatic activity in a concentration-dependent manner [15]. Unlike bacteria and plants, yeasts do not increase their intracellular proline level under various stress conditions. However, our previous study revealed that the Ile150Thr variant of Pro1 was less sensitive to negative feedback inhibition by proline [15]. Thus, yeast cells accumulate proline by expressing the mutant PRO1 gene encoding the Ile150Thr variant. Yeast cells with proline accumulation have been shown to exhibit an increase in stress tolerance to freezing, desiccation, oxidation, and ethanol [16].
The aging of yeast cells is measured in two different ways: the replicative lifespan and the chronological lifespan [17]. The replicative lifespan is defined as the number of mitotic divisions before senescence and is used as a model to study the aging of proliferative cells (stem cells, etc.). During the process of mitotic division, yeast cells are exposed to various stresses such as osmotic shock. Therefore, stress protectants in cells are important for replicative lifespan regulation. In fact, we recently reported that intracellular proline levels regulate the replicative lifespan in yeast [18]. In contrast, chronological lifespan is the time that yeast cells survive under non-proliferative conditions (namely, after the stationary phase) and this period models the aging of postmitotic mammalian cells (neuron cells, etc.). After the stationary phase, yeast cells are exposed to nutrient starvation; thus, energy homeostasis in cells is known to be critical for longevity. Basically, the quality and quantity of nutrients in the environment are key factors of longevity regulation. It is common knowledge that calorie restriction extends longevity [19]. The cellular response to calorie restriction occurs partly through nutrient-sensing mechanisms containing the target of rapamycin, cAMP-PKA, and/or the Snf1 pathways [20]. These signals maintain cellular homeostasis by controlling energy metabolism, stress responses and so on, leading to regulation of the lifespan.
In this study, we discovered that Put1 is important for the chronological lifespan of yeast. During the aging period, PUT1 expression was positively regulated by Put3 and was required for longevity. More importantly, the oxidation of proline by Put1 helped maintain mitochondrial membrane potential and ATP production, leading to an increase in lifespan. Our results suggest a possible mechanism for longevity regulation via proline metabolism in yeast.

In this study, we discovered that the proline oxidase Put1 contributes to the chronological lifespan of yeast. Upon yeast cells entering the aging period, PUT1 expression was positively regulated by Put3 and was associated with longevity. More intriguingly, Put1 helped sustain mitochondrial membrane potential and ATP production, leading to maintenance of the energy metabolism. Our present data suggest a possible mechanism for the longevity regulation via proline metabolism (Figure 1). Yeast cells normally produce ATP from glucose and ethanol via glycolysis in the cytosol and/or ETC in mitochondria, respectively. When all glucose and ethanol are consumed, yeast cells probably uptake proline from the environment and start to utilize proline as an energy source via its oxidation by Put1. This conversion of proline into P5C results in the generation of electrons that are donated to ETC through FAD to generate ATP. The mechanism functions for the homeostasis of energy metabolism, which contributes to longevity. 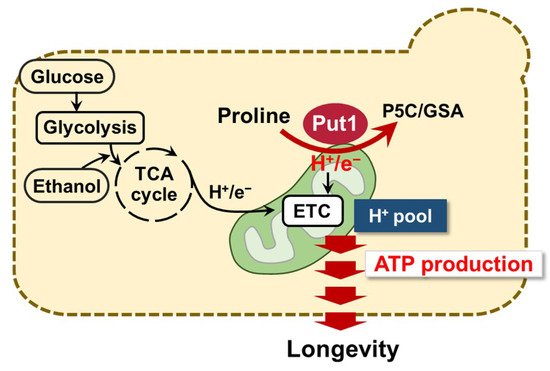