Diaziridine is a high strained three-membered heterocycle with two nitrogen atoms that plays an important role as one of the most important precursors of diazirine photoaffinity probes. Recent research trends can be grouped into three categories, based on whether they have examined non-substituted, N-monosubstituted, or N,N-disubstituted diaziridines.

An important intermediate and precursor in organic chemistry, diaziridine [1] is a highly strained three-membered heterocycle with two nitrogen atoms [2]. The other excellent properties of diaziridine include a weak N–N bond, low toxicity, hydrazine aminal duality [3], and neurotropic activity [4]. Diaziridines, independently discovered by three research groups (Schmitz’s, Paulsen’s, and Abendroth and Henrich’s research groups) between 1958 and 1959, progressively achieved popularity in the field of chemistry over the two decades following these first publications [5]. Non-substituted diaziridine (diaziridine without any substituent on the nitrogen atom, 1) was developed as a reagent for a variety of oxidative transformations [6] and employed in the synthesis of carbene-mediated photoaffinity-labeled photophores of 3 H -diazirines [7][8][9][10]. The trend of using diaziridine 1 as a precursor for the diazirine photoaffinity probe has been progressively updated until the present day, and a series of reviews have discussed it since the 2010s [7][11][12][13][14][15].

Three key approaches are known for the construction of monocyclic diaziridines 4, and these were summarized by Makhova et al. in their previous 2008 review of diaziridine ( Figure 2 ) [20]. First, the reaction of primary aliphatic amines or ammonia 5 with the condensation products of carbonyl compounds 6 and aminating reagents. Second, the reaction of imines 7 (the condensation product of carbonyl compounds and primary aliphatic amines) is conducted with aminating reagent 8. Last, a three-component condensation reaction involving the carbonyl compound 9, primary aliphatic amines or ammonia 10, and aminating reagents (hydroxylamine-O-sulfonic acid (HOSA) or halo(alkyl)amine, 11). In addition, in their summary, Meijler et al. [7] emphasized that diaziridine synthesis as a precursor of 3-aryl-3-trifluoromethyl-3 H -diazirine can start from the preparation of corresponding α,α,α-trifluoroacetophenone via oximation and tosylation (or mesylation)—the condensation products of carbonyl compounds 6—followed by the treatment of ammonia. In consequence, these known approaches can be described as the “conventional” synthesis methods that have generally been used for the synthesis of diaziridine up until the most recent past. The reactivity of diaziridine was then pursued in order to broaden the advanced applications of these three-membered heterocycles, with reactions that can take place with or without any ring cleavage [1], or the transformation of its unprotected form into respective diazirines through oxidation. Diaziridine transformation induced by electrophilic reagents started being studied in the early 1950s and these reactions are primarily associated with the steric strain of the diaziridine ring and the presence of its two nitrogen atoms [5]. 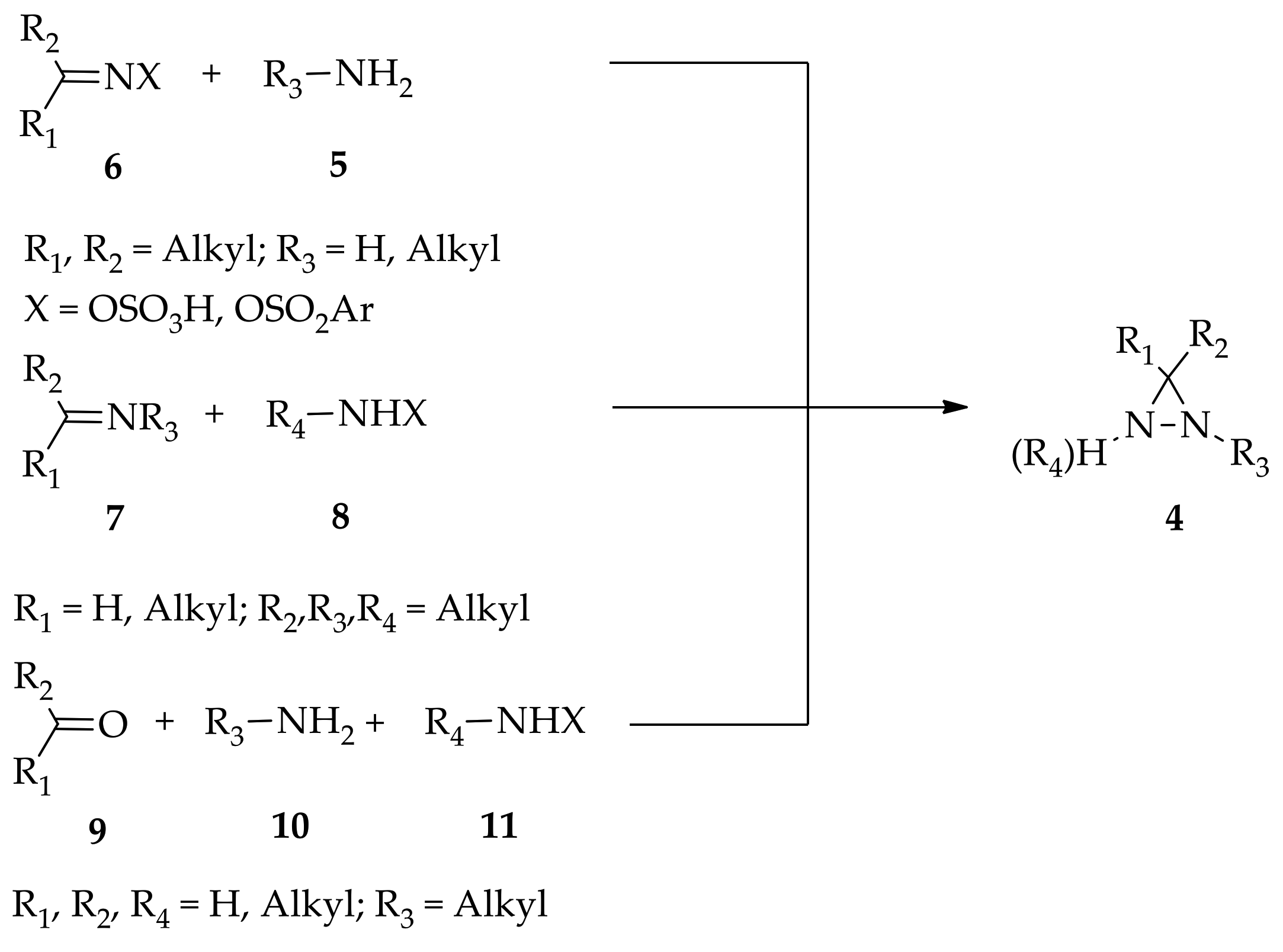 The rapid improvement in the quality of analysis instrumentation for experimental structure identification and detailed stereocenter has lead to the intensive study of the detailed structure determination of diaziridine. Experimental data regarding the structures of diaziridines are important for achieving deeper insight into the previously elucidated features of the diaziridine ring structure, in particular, for the comparison of its corresponding N-N or C-N bond length [21]. Recently, experimental data were obtained for the structural determination of N ,N -disubstituted diaziridine [22] and its trisubstituted form, which possesses an additional alkyl group at position 3 [23][24], bis-diaziridine [25], and bicyclic diaziridine [26] derivatives by the method of gas electron diffraction. Most diaziridine derivatives are liquids; thus, the recent experimental determination of its structures on the basis of X-ray diffraction studies [21][27] has only been performed in a few cases. Investigation of conformational and configurational changes in order to understand the effect of the interconversion barrier on the steric hindrance of the diaziridine substituent has also been conducted using dynamic gas chromatography [28][29][30]. The identification of equilibrium (molecular) structures using joint analysis of gas phase electron diffraction, quantum chemistry, and spectroscopic data [25][26] is becoming a trend and has made diaziridine stereochemical study more visible. Table 1 summarizes the details of recent experimental structure identification studies of several diaziridine derivatives.

Since the strained ring compound exhibits high detonation performance when releasing a large amount of strain energy during ring opening, diaziridine properties were taken into consideration in this study. The design and theoretical investigation of a series of trinitromethane derivatives of diaziridines as candidates for high-energy-density materials were conducted [31]. A computational study of several properties of diaziridines was performed by using Density Functional Theory—B3LYP functional and the aug-cc-pVDZ basis set with the Gaussian 09 program. The formation heat, energetic properties, stability, impact sensitivity, and the calculation of vibrational frequency were studied, and it was found that the trinitromethane substituent was beneficial for enhancing the detonation properties. Among the diaziridines tested, 12 ( Figure 3 A) and 1-(trinitromethyl)diaziridine ( 13, Figure 3 B) were confirmed to possess good potential as a high-density materials, possessing good detonation performance and higher stability. 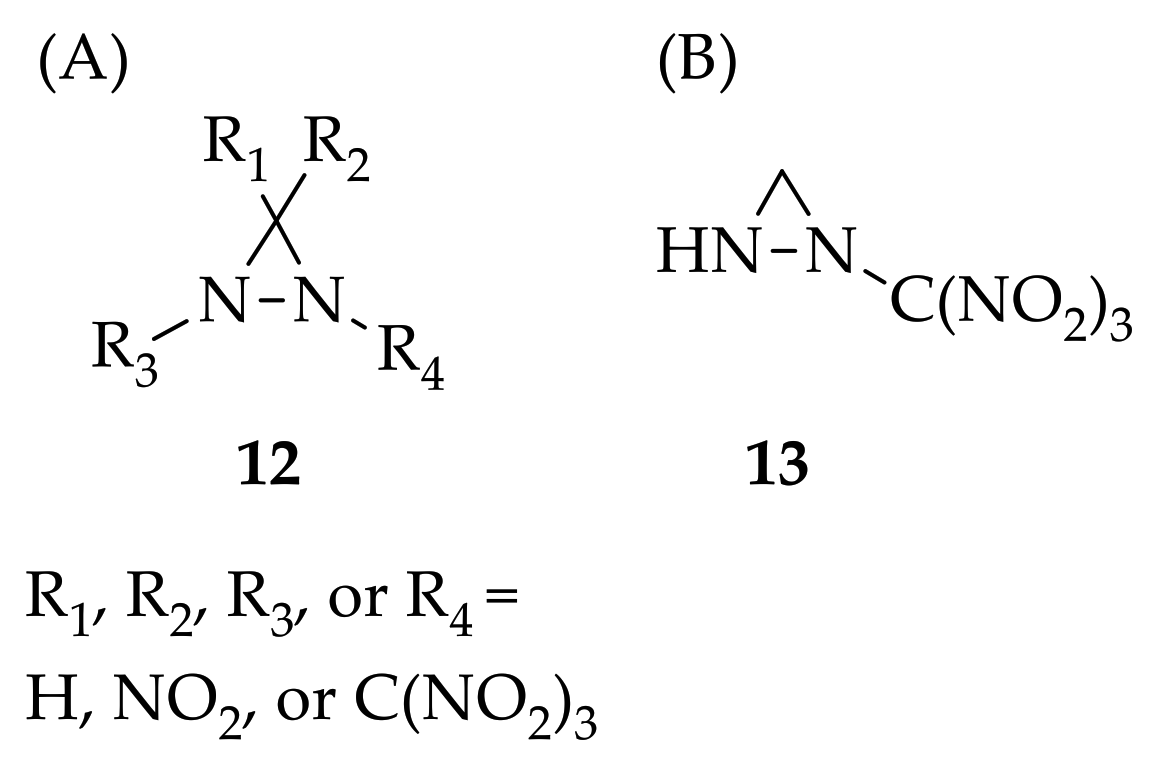 The non-, N -mono-, and N ,N -disubstituted diaziridines are attractive skeletons as building blocks in the synthesis of important intermediates and precursors with excellent stereochemical properties. The trend of diaziridine formation is still following the conventional concept, wherein valuable synthesized diaziridine derivatives are added together with various substituents. More unconventional approaches are limited to the period of the last decade, and further studies aiming to extend these unconventional methods remain to be performed. The study of diaziridine transformation in the field of organic and pharmaceutical chemistry—especially to become a precursor in diazirine-based photoaffinity labeling probes for drug design—as well as its stereochemistry, offer great opportunities for further exploration.