It took more than 30 years for an updated estimation to be published, finding that worldwide annually 385 million cases of unintentional acute pesticide poisoning are expected to occur, including around 11,000 fatalities [1]. Additionally, 110,000–168,000 fatalities were lately estimated to occur from suicidal pesticide poisoning worldwide mostly in rural agricultural areas in low- and middle-income countries [2]. During the last decades, international bodies have taken up the issue of health hazards from pesticide exposure and adopted a great number of resolutions and programs to improve their safe use [3]. Realizing, however, that despite all efforts there might be no safe use of toxic pesticides especially under conditions of poverty, the International Code of Conduct on Pesticide Management of WHO and the Food and Agriculture Organization (FAO) endorses a new policy approach by considering the prohibition of highly hazardous pesticides [4].

Case fatality and severity scores might be a more realistic indicator for human toxicity of substances than hazard classes based on animal testing. If so, the indicators should primarily point to the substance-specific toxic properties and not on the characteristics of the incident and treatment e.g., cause, dose, and time lag between exposition and treatment. A low variability of the e.g., pesticide specific case-fatality-rate (CFR) would then indicate problematic chemicals from a public health perspective as the human toxicity of an agent in general was captured rather than the clinical course of a specific poisoning. Recently, it has been suggested that a case fatality after self-poisoning greater than 5% should be used as an indicator of a highly hazardous pesticide and that a complete ban of these pesticides be targeted [6].

In order to study whether and which indicators of the severity of poisonings can be used to prioritize pesticides of public health concern we systematically reviewed the scientific literature. We aimed at answering the following research questions: For which active ingredients in pesticides or for which group of pesticides have human case- fatality-ratios been published? What is the geographical distribution and the variability of the reported case-fatality ratios? What is the relationship between the human case-fatality and WHO hazard classes? Which factors influence the case-fatality? Which severity scores are used with respect to pesticide poisonings?

We conducted a systematic literature review without prior protocol by starting the search for publications in the database PUBMED. We used the terms “pesticides” AND (“case-fatality-ratio” OR “case-fatality-rate” OR “poisoning severity score”) and allowed for studies in English, German, Portuguese, and Spanish with a publication date between January 1990 and October 2014. The search procedure was repeated with the database SCOPUS which has a higher coverage outside medical sciences and includes the database EMBASE completely as of 1996. In a sensitivity analysis addressing our search strategy and a possibly too strict selection, we additionally searched for specific pesticides and checked these with the results in our automatic search as outlined below.

According to the PRISMA-Statement (prisma-statement.org) all records were screened and excluded in case abstracts clearly indicated non-eligibility, e.g., when only specific symptoms of poisonings or animals were studied. Full-text-analysis was carried out on all other records. Studies were considered eligible when addressing active ingredients in pesticides or groups of active ingredients (e.g., organophosphates). Case-studies and papers which do not report or not allow to calculate a case fatality were excluded. The search was supplemented by inspecting bibliographic reference lists in all identified papers. Articles initially not identified by the automatic search were then manually back searched. Finally, 149 papers were identified of which 67 could be included after assessment. We excluded 25 papers by abstract and 57 by full-text analysis mainly because no information on active ingredients or group of pesticides was presented ( Figure 1 ). 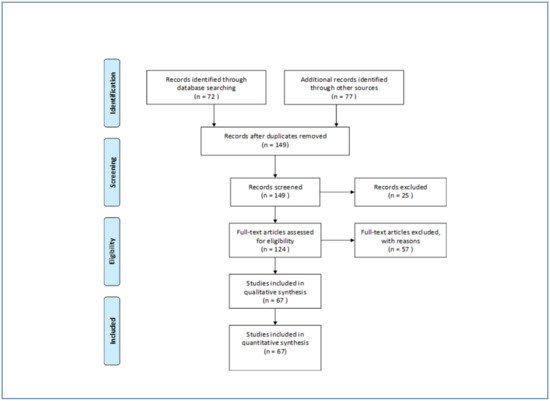 Case fatality was extracted from all included publications. In most papers, case fatality was referred to as case-fatality-ratio (CFR) or mortality-ratio and was given as number of fatal poisonings divided by the number of all poisonings with a specific agent or group of agents respectively. When the CFR was not stated in the studies that we calculated from given numbers of incidents. Case fatality and indicators used as descriptors of the poisoning severity as well as information on the number of patients, the country, year, cause of poisoning, and timespan of the study were retrieved study-wise for each poisoning agent in a data base.

Overall, case numbers and CFR were studied by minimum, mean, median, and maximum values. The cross-study variability of the CFR was assessed by the coefficient of variation (CV) as the ratio of the standard deviation to the mean and its normalized form which limits the CV to the interval 0–1 and adjusts for the number of observations [7]. Mathematically, a CV lower or equal 100% indicates low variability taking the exponential distribution as a reference. Calculation of CV was restricted to those pesticides which were addressed in more than three papers. All calculations were done with SAS statistical software, Version 9.4 (SAS Institute Inc., Cary, NC, USA).

Of the active ingredients considered, 17% show case-fatality above 20. Table 3 shows how the CFR is captured by the WHO Recommended Classification of Pesticides by Hazard.

Thirty-two pesticide groups or active ingredients were studied by more than one paper and nine by more than three papers. Table 4 gives the coefficients of variation (CV) along with case-fatalities and WHO-classification on all pesticides addressed in more than three publications. All CFR show a coefficient of variation lower or equal 100%. Four out of the seven active ingredients are seen with a CV even well below 100% whereas only malathion and glyphosate reach 93% and 100%, respectively. Glyphosate serves as an example of how study characteristics impact on the variability of CFR. The highest value of 29% was seen in a study in Taiwan [35] recruiting in two hospitals which serve as referral hospitals and include a poisoning control center. The lowest value of 0.06% follows from two deaths in 3464 human exposure cases (98% unintentional) collected in the US National Poison Data System by telephone calls received in 57 regional poison centers [45]. If only those cases treated in health care facilities were taken as the denominator (see Mowry et al. p 1165) , the CFR would be 3.6% and further decrease the variability across countries. With respect to the normalized coefficient of variation, which adjusts for the number of publications, malathion is the active ingredient with the highest variability but also well below the possible 100%.

Clinical indicators for the severity of poisonings were mentioned in many papers. Although the Poisoning Severity Score (PSS) was part of the search terms we found more papers reporting on the Glasgow Coma Score (GCS). Additionally, the Acute Physiology and Chronic Health Evaluation Score (APACHE), the Sequential Organ Failure Assessment (SOFA), and the Simplified Acute Physiology Score (SAPS) were used along with scores built specifically by the study authors ( Table 5 ). Studies often aim at a comparison of different indicators with respect to their performance for predicting study specific clinical outcomes. More information on the used indicators is available in some studies, e.g., mean and grading of scores. However, the number of papers in this entry is too limited to study the variability of indicators with respect to specific group of pesticides or active ingredients.