This review provides an updated overview of the interaction between Aβ proteins with pericytes, one the most significant and often forgotten cellular components of the BBB and the inner blood retinal barrier (IBRB).

Coined by Virchow, the word “amyloid” was derived from the Latin word amylum and the Greek word amylon for starch that stained positive with iodine [32,33]. Friedrich and Kekule later correctly identified amyloid to consist mainly of protein and a small fraction of glycosaminoglycans [34]. All known types of AD (early-onset, late-onset, and familial) seem to involve the aberrant accumulation and/or dysfunctional clearance of Aβ proteins. Amyloidosis refers to the aberrant accumulation and deposition of amyloid fibrils in the central nervous system (CNS) that are associated with several age-related human pathologies, including AD and Parkinson’s disease. Nearly 50 unique proteins or peptides have been associated with the amyloid fibrils that exist in amyloid-based diseases [35,36]. These amyloid fibrils self-assemble and accumulate extracellularly as plaques and intracellularly as intranuclear inclusions. Nearly 40 years of research on amyloid accumulation and deposition have resulted in technologies such as cyro-electron microscopy and solid-state NMR spectroscopy that yielded the first near-atomic-resolution structures of amyloid fibrils formed in vitro [37]. Conformation-dependent antibodies have been used to separate Aβ proteins into different structural classes [38–40] that may play different pathological roles in AD. These structural classes include fibrillar and prefibrillar oligomers. Aβ40 fibrillar oligomers are small aggregates that have a high β-sheet content and are structurally similar to fibrils, with some disruptions in the β-sheet stacking [41]. Breydo et al. examined structural differences among fibrillar oligomers, prefibrillar oligomers, and fibrils using Raman, Fourier transform infrared spectroscopy (FTIR), and Circular dichroism (CD) spectroscopy. They found that fibrillar oligomers, although less stable, are structurally similar to fibrils, while prefibrillar oligomers are much less ordered [42]. These findings support previously proposed models of Aβ oligomers.

The variable organization of α-helices and β-strands in globular proteins associated with Aβ proteins consists of more than 1375 distinct fold patterns [43]. This phenomenon leads to different clinical presentations involving the aggregation of the same protein, which may explain why amyloid-based diseases are so difficult to understand and treat [43]. Since the first documented case of AD in a patient by Alois Alzheimer in 1907, more than 50 disease-causing amyloidogenic proteins have been identified [44,45]. There are a multitude of genetic variants that predispose individuals to amyloid-based diseases. For instance, individuals with trisomy 21, which contains the gene encoding amyloid precursor protein (APP) from which Aβ40/42 are derived, are at a higher risk of AD [46]. What initiates the onset of amyloid-based diseases remains unclear. Moreover, strategies that decrease the concentration of amyloidogenic monomers to reduce amyloid load [47] or promote the sequestration of monomers into non-amyloid amorphous aggregates [48] could have deleterious effects on the normal function of these monomers. Therefore, an understanding the molecular basis for amyloid aggregation and deposition will aid the development of novel therapeutic strategies for combating amyloid-based diseases like AD.

Pericytes, also known as Roget cells or mural cells, were first described by Eberth and Rouget in the 1870s. The name “pericyte” was introduced by Zimmermann in 1923 [49–52]. Pericytes are heterogeneous, tissue-specific, and multipotent cells that are abluminal to endothelial cells. They have contractile properties due to the expression of contractile and cytoskeletal proteins such as α-smooth muscle actin (α-SMA), vimentin, desmin, myosin, and nestin. These proteins enable pericytes to extend their cytoplasm to wrap around the endothelial cells lining pre-capillary arterioles and post-capillary venules throughout the body [49–52]. In culture, primary brain pericytes maintain their long cytoplasmic extensions and stain positive for neural/glial antigen-2 (NG2) (Figure 1). Although brain pericytes do not possess any unique antigenic biomarkers, they can be identified by their expression of platelet-derived growth factor receptor-β (PDGFRβ), α-SMA, CD13, NG2, CD146, and desmin [53]. NG2 and CD13 are also present on vascular smooth muscle cells (vSMCs) in large vessels [53]. Unlike the vasculature of peripheral tissues, the vasculature in the retina and brain is known to have the highest pericyte-to-endothelial cell ratio [54,55]. The proximity of pericytes to endothelial cells facilitate signaling that is essential for vessel formation, vessel maturation, pericyte recruitment, and pericyte coverage [55]. Endothelin-1 signaling can induce the arrangement of brain vascular pericytes on capillaries (Figure 2A) in order to constrict capillaries and regulate CBF (Figure 2B). PDGF-β secreted by endothelial cells recruits pericytes to blood vessels by binding to PDGFRβ on pericytes, causing receptor dimerization, autophosphorylation, and activation [56,57]. The human BBB consists of astrocytes, pericytes, neurons, and the extracellular matrix; together, they form the NVU [58]. Under physiological conditions in the CNS, pericytes regulate BBB integrity via the use of tight/adherens junctions and transcytosis across the BBB. Pericytes regulate angiogenesis, phagocytosis, the clearance of toxic metabolites from the CNS, and CBF by inducing changes in capillary diameter, neuroinflammation, and multipotent stem cell activity [59]. Proinflammatory responses at the BBB are also mediated by PDGFRβ signal transduction in pericytes [60]. Transcriptional regulation of chemokines that promote endothelial expression of monocyte chemoattractant protein-1 (MCP-1), nitric oxide (NO), IL-1, IL-6, IL-12, and tumor necrosis factor-α (TNF-α) can influence the transvascular trafficking of macrophages and leukocytes into the brain parenchyma [59]. 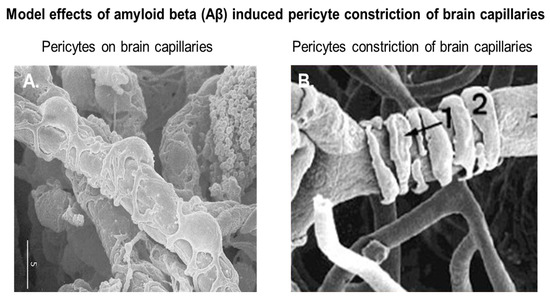