One of the main virulence factors produced by Bordetella pertussis is pertussis toxin (PTx) which, in its inactivated form, is the major component of all marketed acellular pertussis vaccines. PTx ADP ribosylates Gαi proteins, thereby affecting the inhibition of adenylate cyclases and resulting in the accumulation of cAMP. Apart from this classical model, PTx also activates some receptors and can affect various ADP ribosylation- and adenylate cyclase-independent signalling pathways. Due to its potent ADP-ribosylation properties, PTx has been used in many research areas. Initially the research primarily focussed on the in vivo effects of the toxin, including histamine sensitization, insulin secretion and leukocytosis. Nowadays, PTx is also used in toxicology research, cell signalling, research involving the blood–brain barrier, and testing of neutralizing antibodies. However, the most important area of use is testing of acellular pertussis vaccines for the presence of residual PTx. In vivo models and in vitro assays for PTx often reflect one of the toxin’s properties or details of its mechanism.

Whooping cough, or pertussis, is caused by infection with the Gram-negative bacterium Bordetella pertussis. Although people of all ages are susceptible to pertussis infection and can transmit the disease, its impact on health is most severe in young children and infants. Despite intensive vaccination programs, there remains an estimated 24 million cases and 160,700 deaths from pertussis each year [1]. The first generation of pertussis vaccines were developed in the 1920s and were made of bacteria which were killed by exposure to inactivating chemicals and heat. Although these whole-cell pertussis (wP) vaccines have proven to be highly effective, and are still used in many countries, they can cause fever, malaise, and pain at the injection site. Due to these side effects from the wP vaccines, parents are frequently reluctant to have their infants and children receive the required booster doses, thereby impacting vaccination coverage. To alleviate some of these problems, a second generation of pertussis vaccines was developed in the 1970s which contained a minimum of purified bacterial components, considered important for inducing protective immunity. The acellular pertussis (aP) vaccines all include inactivated pertussis toxin (referred to as pertussis toxoid (PTd) when inactive), and a combination of other pertussis virulence factors such as filamentous hemagglutinin (FHA), pertactin, and/or fimbria types 2 and 3. aP vaccines are the vaccine of choice in most high income countries and are considered less reactogenic than wP vaccines, which are still widely used in other parts of the world, including Latin America, Africa, and parts of Asia [2].
The inclusion of PTd is considered essential for aP vaccine-induced protective immunity [3][4], but its manufacture must be carefully controlled in order to ensure the sufficient chemical inactivation of pertussis toxin (PTx) without compromising the quality of its antigenic epitopes. With insufficient chemical inactivation, there is a risk of residual activity, but it would conserve those epitopes that confer protective immunity; whereas, excessive inactivation eliminates the risk of residual PTx activity but yields antigens that may not induce protective immunity. The balance between these two attributes (residual activity and protective antigens) is critical in the manufacture of safe and effective vaccines and is, therefore, an important concern in regulation and batch release testing. In vitro and in vivo methods developed for the assessment of PTx activity in aP vaccines have recently been reviewed by others [5]. In addition to safety testing, PTx is also used in toxicology research, cell signalling, research involving the blood–brain barrier, and testing of neutralizing antibodies. Therefore, this review focusses on assays used for the determination of residual PTx activity in the context of aP vaccines and purified PTx, with an emphasis on assay mechanisms and characteristics, their limitations, and the regulatory considerations for adapting the methods for regulatory and non-regulatory purposes.

PTx is an AB-type bacterial toxin composed of an A-protomer made of the S1 subunit, and a B-oligomer comprised of subunit proteins S2 to S5. The B-oligomer complex is responsible for binding of the toxin to glycosylated proteins on cell membranes. Upon binding, the toxin is internalized and transported in a retrograde manner through the Golgi complex and endoplasmatic reticulum. Once in the endoplasmic reticulum, the S1 subunit dissociates from the B-oligomer and is released into the cytosol [6], where it hydrolyses NAD and transfers the released ADP-ribose to the α subunit of inhibitory/other/transducin G (Gαi/o/t) protein-coupled receptors [7][8]. This prevents GDP to GTP exchange and fixes the Gαi/o/t subunits in a dissociated and inactive GDP-loaded state. Consequently, the inactive Gαi/o/t subunits cannot inhibit their target enzymesadenylate cyclases (AC), or affect other target proteins. This potentially causes an increase in the second messenger cAMP, and subsequent downstream effects (Figure 1). This mechanism of PTx action is considered to be the cause of the majority of its biological effects, including exocrine secretion, lipolysis, stimulation of pancreatic islet cells, histamine sensitization, leukocytosis, and inhibition of lymphocyte and neutrophil migration [9][10]. However, PTx-dependent ADP ribosylation might also affect various other cellular mechanisms such as the expression of αi and αo subunits [11][12][13], regulation of PI3K/Akt pathway [11], tuberin phosphorylation, and RSG expression [12], as well as ERK/MAP kinase pathways [13][14]. In addition, various ADP ribosylation independent effects of PTx on cell signalling have been described and include the ERK/MAP kinase pathway [15][16][17], and pathways involving tyrosine kinase [18], NF-κB [19] and Rac [20]. Other non-cAMP mechanisms related to the binding of PTx to receptors include the proliferation of T cells [15][16], glucose oxidation in adipocytes [16], and activation of TLR4 [19]. 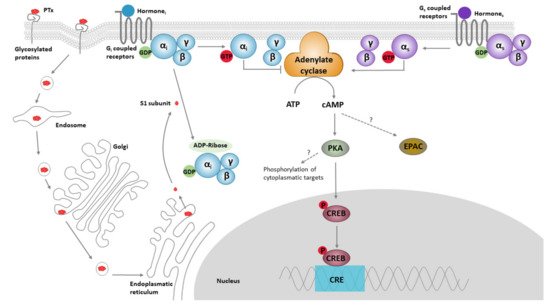 Figure 1. The classical models for PTx binding, internalisation, ADP ribosylation, and its effect on cell signalling. The B oligomer of PTx binds to glycoconjugate proteins on the cell surface, upon which the holotoxin enters the cell by endocytosis, followed by retrograde transport through the endosome, Golgi and the endoplasmatic reticulum. Subsequently, the S1 subunit is released into the cytosol. Within the cytosol, the S1 subunit catalyses the transfer of ADP-ribose from NAD+ to the α-subunit of Gαi/o/t proteins, thereby preventing interaction of these proteins with their cognate receptors. ADP ribosylation fixes the α-subunit of the G-proteins in their inactive (GDP-bound) form, thereby rendering it unable to inhibit its target enzymes; ACs. ACs catalyse the conversion of ATP into cAMP. This second messenger binds to and activates protein kinase A (PKA), which is involved in a range of pathways, one of which is the phosphorylation of the cAMP response element-binding protein (CREB). CREB binds to the DNA sequence cAMP response elements (CRE) and thereby increases the transcription of CRE responsive genes. PTx-induced cAMP might also directly bind to “exchange protein directly activated by cAMP” (EPAC), which are guanine nucleotide exchange factors for Rap molecules.

3. Role of PTx in Pathology and Toxicity

There is some debate regarding the role of PTx in the pathology of pertussis disease. Several lines of evidence underline the importance of PTx for some aspects of the disease such as leukocytosis and the paroxysmal cough [9]. However, despite its name as a toxin—and unlike many other bacterial toxins—PTx is not considered to be particularly noxious or harmful to humans and animals (Table 1). Indeed, considering its high potency to ADP-ribosylate Gαi proteins, the in vivo response to PTx is rarely one of distress, morbidity or mortality. For example, in the mouse histamine sensitization test described below, the apparent health and behaviour of the animals is normal for several days after PTx administration. In that test, it is not the PTx to which the animals succumb, but rather the histamine administration at a dose which would otherwise be safe in mice not exposed to PTx. In humans, the acute LD50 of PTx has never been estimated and it is impossible to extrapolate an unsafe amount of PTx based on animal data due to the inter-species differences. Nevertheless, a large dose of 0.5 or 1.0 μg/kg of purified PTx has been administered intravenously to adult volunteers in order to study its effect on insulin and blood glucose levels and these volunteers did not experience any reported adverse outcomes [21]. Although the prior immune status or history of vaccination to pertussis was not provided, this study suggests PTx doses in the ranges administered in the study are not toxic for adults. However, it should be kept in mind that the disease caused by B. pertussis can be extremely different in infants under three months of age and is associated with complications such as pulmonary dysfunction and hypertension, leukocytosis, and encephalopathy [22]. As the immune status and the function of the immune system of these extremely young individuals differ from adults [23], the interpretation and extrapolation of the data from studies with adult subjects should be done with care.
Table 1. Dose-toxicity response for PTx administered to humans and mice.

The diverse properties of PTx require different approaches and methods, as is reflected in the particularly diverse in vivo models and in vitro assays that are addressed in this review. All of the methods have their own characteristics and limitations, and the methods cannot easily be compared due to their diverse nature, and as a result of the different PTx preparations used across laboratories. A comparison is further compounded by the specific activity of each PTx preparation which, like any purified enzyme, is not directly related to their stated protein content (see Table 2). While early studies utilized PTx purified in house, subsequent studies often included an international reference preparation. The JNIH-5 international reference standard was prepared in 1984 and assigned an activity of 10,000 IU (International Units) per vial for the in vivo histamine sensitization test and the in vitro CHO (Chinese hamster ovary) cell clustering assay (both discussed in more detail below) [21]. However, at the time of calibration, the CHO cell clustering assay was not standardized between laboratories, thereby resulting in a high variability of reported PTx activities. Subsequent calibration studies using standardized protocols caused a diversification between the CHO and HIST unitage. Due to shortage on both the JNIH-5 and the Biological Reference Preparation 1 (BRP1), international collaborative studies were performed to determine the suitability of the 2nd WHO International Standard (IS) for Pertussis Toxin (coded as 15/126) and the replacement preparation BRP2. The 2nd IS reference preparation was assigned 1881 IU/ampoule in the HIST and 680 IU/ampoule in the CHO cell clustering assay [29]. The BRP2 was only calibrated in the CHO cell clustering assay and assigned 130 IU/vial [30]. This highlights the importance of calibrating PTx preparations, and also shows that the units of activity might differ between methods and can thereby influence the interpretation of results.
Table 2. Commonly used PTx preparations and their potencies.