In idiopathic pulmonary fibrosis (IPF), several factors may have a negative impact on the nutritional status, including an increased respiratory muscles load, release of inflammation mediators, the coexistence of hypoxemia, and physical inactivity. Nutritional abnormalities also have an impact on IPF clinical outcomes. Given the relevance of nutritional status in IPF patients, we sought to focus on some critical issues, highlighting what is known and what should be further learned about these issues. We revised scientific literature published between 1995 and August 2019 by searching on Medline/PubMed and EMBASE databases including observational and interventional studies. We conducted a narrative review on nutritional assessment in IPF, underlining the importance of nutritional evaluation not only in the diagnostic process, but also during follow-up. We also highlighted the need to keep a high level of attention on cardiovascular comorbidities. We also focused on current clinical treatment in IPF with Nintedanib and Pirfenidone and management of gastrointestinal adverse events, such as diarrhea, induced by these antifibrotic drugs. Finally, we concentrated on the importance of pulmonary rehabilitation program, including nutritional assessment, education and behavioral change, and psychological support among its essential components. More attention should be devoted to the assessment of the undernutrition and overnutrition, as well as of muscle strength and physical performance in IPF patients, taking also into account that an adequate clinical management of gastrointestinal complications makes IPF drug treatments more feasible.

In recent years, nutritional status has increasingly gained attention in the evaluation of patients with chronic respiratory diseases since their clinical course is often characterized by progressive weight loss and reduction of muscle mass[1][2][3].

As shown in Figure 1, in IPF, several factors may have a negative impact on the nutritional status of IPF patients, including an increased respiratory muscles load, release of inflammation mediators, hypoxemia, and physical inactivity[6][7][8][9]. 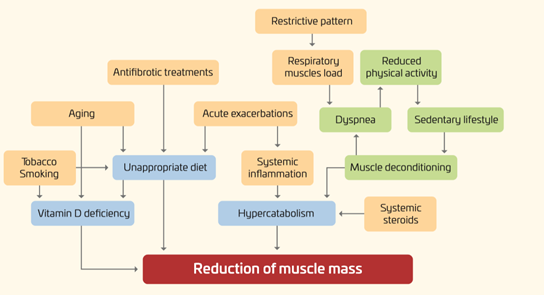 Furthermore, given the rapidly progressive nature of the disease, with a median survival time of only two to five years, all these factors often develop and worsen in a short period of time.

It is worth noting that not only may the “downward spiral” of the underlying pulmonary disease affect the nutritional status, but also nutritional abnormalities may have an impact on clinical outcomes. For instance, lower body mass index (BMI) and body weight loss have been associated with increased mortality[10][11][12]. Conversely, the effects of obesity and metabolic syndrome are less known.

Given the relevance of evaluating nutritional status in IPF patients, a topic which remains still largely understudied, we sought to focus on some critical issues, highlighting what is known and what should be further learned about these issues.

Specific nutritional counseling and dietary advices for IPF patients are not yet available, with the exception of dietary recommendations to reduce the side effects of antifibrotic treatments (see the following sections). The implementation of a nutrition care process may be useful especially in those patients with IPF who are at risk or already malnourished[13]. According to the ESPEN guidelines[13], malnutrition (i.e., undernutrition) can be defined as “a state resulting from lack of intake or uptake of nutrition that leads to altered body composition (decreased fat free mass) and body cell mass leading to diminished physical and mental function and impaired clinical outcome from disease”. Disease-related malnutrition can arise from a number of reasons, for instance the inability to eat (for instance, as a result of anorexia, nausea, and vomiting), impaired absorption, altered metabolism, and hypercatabolism. The diagnosis of malnutrition (undernutrition) may be reached according to international criteria[13] or based on authors’ choices. The term overnutrition includes both overweight and obesity.

From a practical point of view, nutritional status may be assessed by evaluating nutrient intakes, energy expenditure, body composition, laboratory data, and body functions. Overall, only a few studies (in most cases, cross-sectional) have so far evaluated the nutritional status of IPF patients.

To the best of our knowledge, there are no consistent results available on nutrient intakes in IPF. Two studies carried out in Japan[14][15] showed that the consumption of fruit was associated with a reduced risk of IPF, whereas the opposite was true for meat and saturated fatty acids.

Thus, a high proportion of overweight/obese patients (overnutrition) may be expected[17][21]. As a matter of fact, in terms of phenotype, the prevalence of obese patients has been reported in two studies to be 34% and 46%[10][21]. On the other hand, the prevalence of underweight patients was found low (4%), but of clinical significance, in a recent study on French IPF patients[18], whereas it was substantially higher (>20%) in patients recruited in Japan[24]. As far as body composition is concerned, two studies found low fat-free mass (strongly suggesting malnutrition) in a consistent proportion of IPF patients[18][24]. The study by Jouneau et al. also reported low values of mid-arm circumference in nearly one-third of cases[18]. Interestingly, a reduction of pectoralis muscle area (no difference in BMI) was specifically observed in IPF patients with frailty syndrome[21]. Finally, it should be stressed that fat-free mass is also a significant independent predictor of survival in IPF patients[24]. With regard to vitamin status, a recent study showed that patients with IPF exhibited low serum vitamin D concentrations and such deficiency correlated with all-cause mortality, suggesting the role of vitamin D as prognostic factor and therapeutic target [26]. Overall, it should be noted that there are no studies identifying malnutrition and/or sarcopenia, as formal diagnoses, using to international criteria such as those proposed by ESPEN[13] or the 2019 EWGSOP Consensus[27], respectively.