Essential oils (EOs) can be a large source of new food-safe and healthy nematicidal products, due to their strong activity on crop pathogens and pests, including phytoparasitic nematodes, as well as to their low environmental persistence.

Food safety and human health preservation require severe restrictions on the use of synthetic pesticides traditionally applied for the control of crop pathogens and pests, due to their hazardous effects on soil, animals, and humans [1][2]. Phytochemicals from a large variety of plants have received an increasing interest as an alternative strategy for phytoparasitic nematode management [3][4][5][6]. Within plant-derived nematicidal compounds, a major role, as both a research topic and a source of new nematicides, has been increasingly provided to essential oils (EOs) from a wide range of aromatic and medicinal plants [7][8][9]. EOs’ activity has been extensively documented on root-knot nematodes of the genus Meloidogyne, as the phytonematode species economically most damaging and prone to worldwide spread [10][11][12], as well as on the pinewood nematode Bursaphelenchus xylophilus (Steiner and Buhrer) Nickle, due to the serious phytosanitary problems raised by this nematode in the pine forests of South Korea and Portugal [13][14][15]. Adversely, a minor attention was provided to EOs’ activity on other potentially harmful phytonematodes, such as the cyst-forming (Heterodera spp. and Globodera spp.) and root-lesion (Pratylenchus spp.) species or the stem nematode Ditylenchus dipsaci (Kühn) Filipjev [16][17][18][19]. The 10-year studies of our research group were addressed to characterize the chemical features and nematicidal properties of 16 EOs from different botanical and geographic origins, as well as their structure–activity relationship. Main findings from these studies are reviewed and commented in this work in comparison with the related literature data.

EOs are mixtures of volatile lipophilic constituents generally produced by the specialized metabolism of aromatic and medicinal plants from a wide range of botanical families (Lamiaceae, Myrtaceae, Rutaceae, Apiaceae, and others) as responsible for their distinctive odor, flavor or scent, though also present in non-vascular plants such as some liverworts [20]. EOs are stored in plant secretory epithelial or parenchimal cells, forming structures of various kinds such as glandular trichomes or excretory idioblasts. The ecological role of EOs is still not clearly defined, though plant secretory products have been suggested to provide adaptive benefits, including plant protection against phytopathogens and parasites.

Terpenoids are the most important group of specialized components of plant EOs and are principally represented by mono- and sesquiterpene compounds, sometimes associated with low molecular weight phenylpropanoids. Plant terpenoids are synthesized via two different metabolic pathways: the mevalonate (MVA) pathway in cytosol leads to the formation of sesquiterpenoids, while the methylerythritol phosphate (MEP) pathway occurring in chloroplasts results in the synthesis of monoterpenoids. Phenylpropanoids derive instead from the shikimate pathway mainly occurring in chloroplasts .

Plant EOs can be also characterized by phytochemical polymorphism, as individual plants from the same species can produce several chemotypes with different EOs’ compositional profiles, possibly resulting from diversification of EOs biosynthetic pathways under different environmental conditions [20]. This phenomenon was clearly evidenced within the Lamiaceae plants, in which several chemical types were identified in Origanum, Lippia, Mentha, Lavandula, and Ocimum species, though chemotypes were detected also within the Asteraceae, such as among Matricaria, Tagetes, and Achillea species. A summary of some of the most common components in plant essential oils is depicted in Figure 1 . 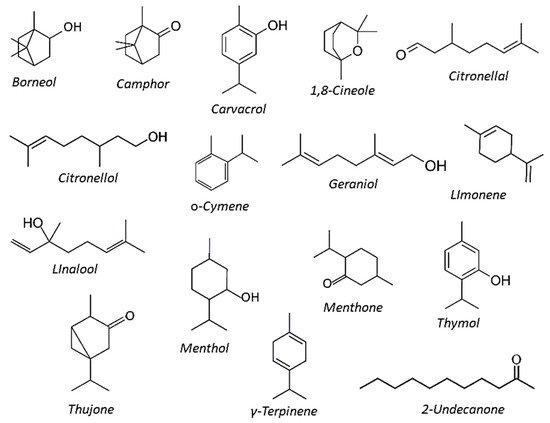 The GC and GC-MS analysis of these EOs highlighted largely differentiated compositional profiles, mainly consisting of high concentrations of oxygenated monoterpenes (Figure 1). Carvacrol was present in the EOs from Monarda dydima, M. fistulosa and Ruta graveolens (14, 24 and 15%, respectively), whereas its isomer thymol was among the monoterpene components of EOs from Thymus satureidoides, M. dydima, and M. fistulosa (12%, 6%, and 8%, respectively). However, EOs from M. didyma and M. fistulosa were also characterized by relevant amounts of γ-terpinene (22% and 25%, respectively). Large amounts of 1,8-cineole (syn eucalyptol) were found in the EOs of R. officinalis and Eucalyptus globulus (47% and 92%, respectively) and in the EO of Cinnamomum camphora (22%). Camphor was detected in the EOs of Artemisia herba-alba (26%) and Rosmarinus officinalis (12%), whereas main constituents of Pelargonium asperum EO were citronellol (35%) geraniol (22%) and linalool (13%). The phenylpropanoid E-cynnamaldheyde (85%) prevailed in the EO of C. verum, while limonene was almost the unique constituent in Citrus aurantium and C. sinensis and citronellal was abundant (84%) in E. citriodora.

Plant-parasitic nematodes are among the most serious constraints to world agriculture, globally causing damages estimated at USD 80 billion per year, most of which is due to root-knot species of the genus Meloidogyne. Moreover, these losses are presumably underestimated due to nonspecific symptoms and difficult recognition of nematode attacks.

A worldwide distribution on a large number of host crops is also presented by root lesion nematodes of genus Pratylenchus, quite rightly included among the most devastating nematode pests. In particular, P. vulnus Allen et Jensen is a severe parasite of fruit trees widespread in commercial orchards and nurseries of the Mediterranean region and United States.

The dagger nematode Xiphinema index Thorne et Allen is an ectoparasite species distributed throughout the world which feeds on grapevine root tips and directly causes root swelling and gall formation with a consequent reduction of plant growth. However, the economic impact of this species is mainly related to its vehiculation of dangerous grapevine viruses, such as the grapevine fanleaf virus.

In our studies, in vitro toxicity bioassays were conducted on 2nd stage juveniles (J2) of M. incognita, mixed-age specimens of P. vulnus and X. index females, which were exposed for 4–96 h intervals to 2–100 μg mL−1 concentrations of EOs or their single constituents. Egg hatchability bioassays were undertaken on M. incognita egg masses treated for 24–48 h with 500–1000 μg mL−1 EO solutions. Finally, in vivo studies on tomato (Solanum lycopersicum L.) were carried out in soil infested by M. incognita (20 eggs and J2 mL−1 soil) and treated with 50–200 μg kg soil−1 doses of the different EOs, applied either in water solution or by fumigation.

The EOs from A. herba-alba and R. officinalis were highly active on M. incognita J2 and X. index females, as both resulted in an almost complete mortality after a 96 h exposure to only 2 μg mL−1 solutions, but were less toxic to P. vulnus [1]. The lesion nematode P. vulnus was less sensitive than M. incognita and X. index also to the EO from T. saturejoides and both Monarda EOs [1][2]. The two Cinnamomum EOs were differently active on M. incognita J2, as a similar 64% mortality occurred after a 24 h J2 exposure to 0.78 and 25 μg mL−1 solutions of C. verum and C. camphora, respectively [3].

Analogously, toxicity to M. incognita J2 largely differed between the two Eucalyptus EOs, as only an 8 h exposure to a 12.5 μg mL−1 solution of E. citriodora EO was enough to cause more than 90% J2 mortality, while similar rates were reached only after a 24 h immersion in a 100 μg mL−1 solution of the E. globulus EO.

In addition to their toxicity to infective J2, the tested EOs also variously affected the hatchability (Figure 2) of root-knot nematode eggs. A 96 h exposure of M. incognita egg masses to a 500 μg mL−1 solution of EOs of C. verum and R. graveolens reduced the percentage of egg hatch to only 1.2% and 7.0%, respectively. Analogously, egg hatchability was strongly limited by similar treatments with M. didyma and, at less instance, M. fistulosa EOs. A lower but significant egg hatch inhibition was also caused by the two Eucalyptus EOs, as well as by the EOs of P. asperum, S. molle, and S. aromaticum. Adversely, poor or nil effects on root-knot nematode egg viability were found for C. aurantium and M. piperita EOs. 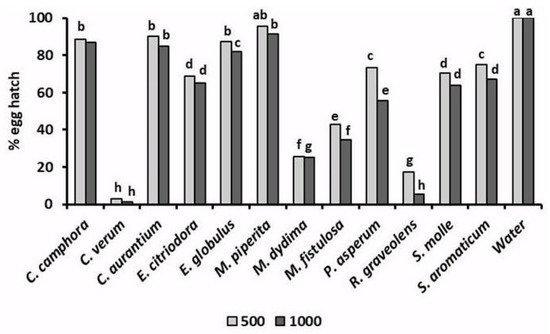 In the experiments in soil, the strongest suppression of gall formation and nematode egg density on tomato roots ( Figure 3) occurred after soil treatments with the EOs from E. citriodora, E. globulus, M. piperita, P. asperum, and R. graveolens, applied at 50–200 μg kg−1 soil doses either by fumigation or in an aqueous suspension. Nematode infestation on tomato roots was also strongly suppressed after soil fumigation with the same range of doses of A. herba-alba, R. officinalis, and T. satureioides EOs, as well as by soil irrigation with 50–200 μg kg−1 soil doses of EOs from S. aromaticum, C. verum, and E. citriodora or M. didyma and M. fistulosa EOs (Figure 4). Adversely, the lowest suppressive performance was provided by the soil treatments with C. aurantium and C. sinensis EOs, in good agreement with the poor or limited in vitro activity of these two EOs. 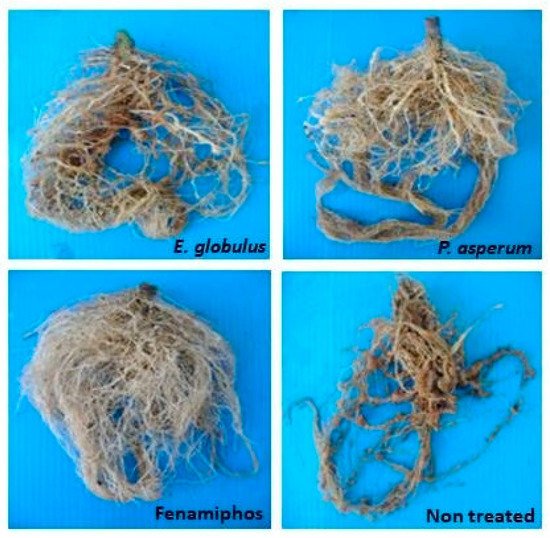 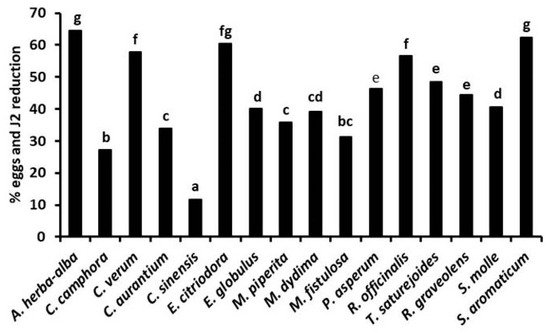 No literature data were available on the nematicidal activity of C. aurantium, S. molle, and Monarda EOs, while only single in vitro assays stated a limited toxicity to root-knot nematode J2 and eggs of EOs from C. sinensis and A. herba-alba and, adversely, a strong toxicity of T. satureioidoes EO [4][5].

Previous reports on the nematoxicity of the other EOs investigated in our studies were mostly referred to in vitro assays on root-knot nematode species with EO samples not always chemically characterized, while toxicity to other phytonematode species was poorly or not at all documented. Most of these studies generally agreed with data from our experiments.

EOs from Eucalyptus species, also including E. citriodora and E. globulus, were always found to reduce J2 motility and viability and egg hatchability of different Meloidogyne species [6][7][8]. In agreement with our data, nematicidal properties of Cinnamomum EOs were described as consistently variable among the species, with a moderate suppressiveness of C. camphora EO to M. incognita on tomato and a strong in vitro toxicity of the EO of C. verum to the root-knot species M. incognita and M. graminicola Golden and Birchfield and the pinewood nematode B. xylophilus [9][10][11].

In accordance with the strong toxicity to M. incognita and P. vulnus observed in our studies, EOs of R. graveolens and S. aromaticum were described as highly active on J2 and eggs of M. incognita, M. chitwoodi Golden, O’Bannon, Santo and Finley, and M. exigua Goeldi [7][12][13], as well as on different stages of B. xylophilus [9][14]. Contrastingly, a greenhouse study of Meyer et al. [15] did not find any significant reduction of M. incognita population on various vegetable crops in soil treated with a S. aromaticum EO formulation.

The low activity of M. piperita EO in our experiments is also confirmed by literature data, which reported a poor in vitro toxicity of this EO to root-knot nematode J2 and eggs and its scarce effectiveness on the infestation of M. arenaria Chitwood on tomato in soil [16][6][17].

The EOs from P. asperum and R. officinalis resulted highly toxic to M. incognita in all our in vitro and in vivo experiments, but were generally documented as poorly active on root-knot nematode J2 and eggs by previous in vitro assays [4][6][16][18]. Contrastingly, experimental applications of R. officinalis EO to soil resulted in a strong reduction of the infestation of M. incognita on tomato [19] as well as of M. javanica and P. brachyurus (Godfrey) Filipjev and Schuurmans Stekhoven on soybean, Glycine max (L.) Merr. [20].