UBR box E3 ligases, also called N-recognins, are integral components of the N-degron pathway. Representative N-recognins include UBR1, UBR2, UBR4, and UBR5, and they bind destabilizing N-terminal residues, termed N-degrons. Understanding the molecular bases of their substrate recognition and the biological impact of the clearance of their substrates on cellular signaling pathways can provide valuable insights into the regulation of these pathways.

A variety of mechanisms regulate cellular signaling pathways. One such mechanism is the control of protein degradation. Protein degradation serves as a protein homeostasis regulatory network that removes unnecessary proteins from the cellular environment when they are no longer needed, damaged, or misfolded. In eukaryotic cells, the ubiquitin–proteasome system (UPS) and the autophagic–lysosomal pathway are the two major protein degradation systems [1]. Of these, the UPS is responsible for the bulk of intracellular protein degradation (over 80%) and plays an essential regulatory role in critical cellular processes, including cell cycle progression, proliferation, differentiation, angiogenesis, and apoptosis [2][3][4][5][6]. The dysregulation of this pathway is associated with many conditions such as neurodegeneration, cancer, and aging [7][8][9][10][11][12][13].

The UPS utilizes ubiquitin, a 76-amino acid polypeptide, as a tag to mark substrates for degradation. This process is called protein ubiquitination and is mediated by the coordinated action of a cascade of enzymes, including ubiquitin-activating enzymes (E1s), ubiquitin-conjugating enzymes (E2s), and E3 ubiquitin ligases (E3s) [14][15][16][17]. Protein ubiquitination starts with an E1 enzyme which activates ubiquitin by adenylating its C-terminus. Once activated, ubiquitin is conjugated to an E2 enzyme. Finally, an E3 ubiquitin ligase transfers the ubiquitin from the E2 enzyme to the target protein (substrate). As a result, this process covalently links the C-terminal glycine of ubiquitin to a lysine residue of the target protein through the formation of an isopeptide bond. Thus, E3s are particularly critical players in the ubiquitination process because they determine substrate specificity. There are more than 600 human E3 ubiquitin ligases encoded by approximately 5% of the human genome [18][19][20].

One unique class of E3 ubiquitin ligases (UBR1 to UBR7) is a family that contains an evolutionally conserved UBR box domain, a substrate recognition domain [21][22]. This review discusses the structural features and signaling pathways mediated by these UBR box E3 ligases.

According to the N-end rule, the lifespan of a protein depends on the character of its N-terminal residue. N-terminal residues that destabilize a protein are termed N-degrons, classified as type 1 or type 2. Type 1 N-degrons contain positively charged amino acids such as Arg, Lys, and His, and type 2 N-degrons include hydrophobic residues such as Phe, Trp, Tyr, Lue, and Ile. These N-degrons can be generated directly by nonprocessive proteases, including methionine–aminopeptidases (MetAPs), caspases, calpains, separases, or indirectly, by enzymatic cascades that mediate the post-translational arginylation of newly exposed Asn, Gln, Asp, Glu, and Cys in mammals [23][24][25][26][27][28][29][30]. Asn and Gln can be converted to Asp and Glu via deamidation mediated by the protein N-terminal asparagine amidohydrolase (NTAN1) and protein N-terminal glutamine amidohydrolase (NTAQ1), respectively [31][32][33]. N-terminal Cys can be oxidized by oxygen depletion or nitric oxide (NO) to become either Cys-sulfinic acid (CysO 2H) or Cys-sulfonic acid (CysO 3H) [34][35][36]. Recently, the formation of Cys-sulfinic acid has been shown to be mediated by cysteamine (2-aminoethanethiol) dioxygenase (ADO) [37]. N-terminal Asp, Glu, and oxidized Cys are conjugated with the amino acid L-Arg by arginyl-tRNA-protein transferase 1 (ATE1) to generate a canonical N-degron, Arg ( Figure 1 ). Recently, some evidence has shown that stabilizing residues can also act as N-degrons in a context-dependent manner [38]. 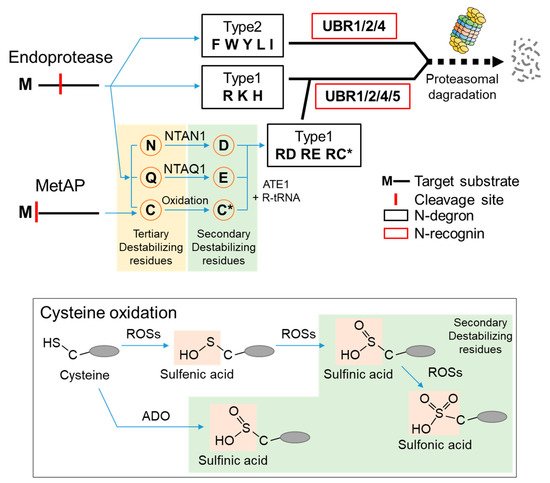 Figure 1. The classical Arg/N-degron pathway. N-degrons are classified as type 1 or type 2 according to the residues exposed by proteases such as Endoprotease and MetAP. Asn, Gln, and Cys are tertiary destabilizing residues (in the light-yellow box), converted into secondary destabilizing residues, Asp, Glu, and oxidized-Cys (in the light-green boxes), respectively, and finally become type 1 Arg N-degrons through ATE1-mediated arginylation (C* denotes the oxidized N-terminal cysteine residue). Cysteine is oxidized by typical ROSs and the recently reported ADO (ROSs, reactive oxygen species; ADO, cysteamine (2-aminoethanethiol) dioxygenase).

Figure 2. Domains of the UBR box protein family. All UBR proteins have a UBR box (yellow ellipse) to recognize N-degrons, and this UBR box is the signature of the UBR family. UBR1 and UBR2 also have an N-domain (green ellipse) that recognizes the type 2 N-degrons. In addition, these UBR proteins have a RING (navy blue square), HECT (blue square), F-box (orange box), or PHD domain (purple box) for E2 binding or ubiquitin conjugation. Other domains include the CUE domain, which recognizes ubiquitin, and the MLLE domain, known to regulate the catalytic activity of HECT.

Amongst RGS family proteins, RGS4, RGS5, and RGS16 are known physiological substrates of the Arg/N-degron pathway [34][36][42]. The first methionine residue of RGS4, RGS5, and RGS16 is constantly removed by methionine aminopeptidases (MetAPs), exposing the second cysteine residue, which can be oxidized by reactive oxygen species (ROSs) or cysteamine (2-aminoethanethiol) dioxygenase (ADO) and, in turn, arginylated by arginyltransferase 1 (ATE1) under normoxia [36][37]. The N-terminal Arg of the arginylated RGS proteins is recognized by the UBR box of UBR1/2, which results in poly-ubiquitination and proteasomal degradation. Accordingly, knocking out UBR1/2 has been shown to stabilize RGS4 and RGS5 and exhibited the impairment of neurodevelopment and cardiovascular development in mice, suggesting the importance of UBR1/2′s N-recognin function in controlling G-protein signaling-mediated biological processes [34][36][43][44][45] ( Figure 3 ). Therefore, these RGS proteins have a very transient existence under normoxia due to protein degradation mediated by UBR1/2, prolonging G-protein signaling. However, the stabilization of RGS proteins under hypoxia or the impairment of UBR1/2 restricts G-protein signaling [36]. 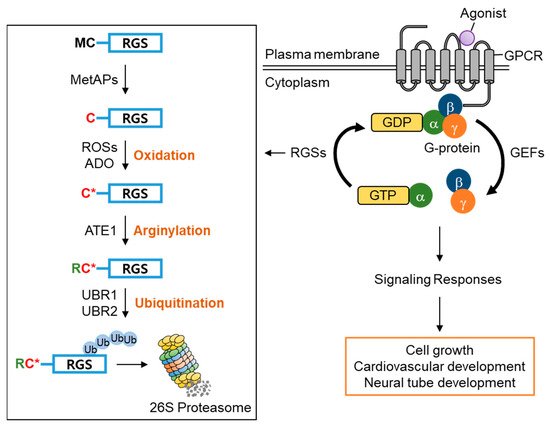 Figure 3. A model describing the regulatory role of UBR1 and UBR2 in G-protein signaling pathways via mediating RGS protein degradation. In GPCRs (G-protein-coupled receptors), heterotrimeric G-proteins are dissociated into G⟨ and G®© subunits by external ligands or signal mediators. Activated GTP-bound G⟨ and G®© stimulate the downstream signaling pathway associated with cell growth and cardiovascular development. The proper regulation of GTP-Gα activity by GTPase-activating RGS proteins is vital in the GPCR-related signaling pathway. Among the RGS proteins, RGS4, RGS5, and RGS16 are cleaved by MetAP to expose a cysteine residue at the N-terminus. After which, these RGS proteins undergo oxidation, followed by arginylation (C* denotes the oxidized N-terminal Cysteine residue). Arginylated RGS proteins are recognized by UBR1 and UBR2 for ubiquitination and degradation. When the Arg/N-degron pathway is genetically inhibited, metabolically stabilized RGS proteins promote the hydrolysis of the GTP-bounded G⟨ subunit, which leads to inactivation of the GPCR signaling pathway.

Figure 4. A model depicting the degradation of pro-apoptotic fragments mediated by UBR1/2 in response to apoptotic stimuli. Caspases or calpains generate pro-apoptotic fragments during the induction of apoptosis. These proteins expose destabilizing residues at the N-terminus, which are short-lived N-degron substrates. As a result, these pro-apoptotic fragments are selectively degraded by the Arg/N-degron pathway, contributing to cell survival. As a negative feedback mechanism, caspases can also inhibit UBR1 function by inducing its cleavage.

mNLRP1B contains an autocleavage site in the FIIND domain, which consists of the ZU5 and UPA subdomains. N-terminal and C-terminal fragments are generated when mNLRP1B is auto-cleaved between ZU5 and UPA (Phe983-Ser984) [49][50][51]. However, this single cleavage does not result in an inflammatory response due to the autoinhibitory activity of the N-terminal fragment of the protein. Many pathogens utilize mechanisms such as anthrax lethal factor (LF), a metalloprotease and component of anthrax lethal toxin (LT), to target and destroy NLRP proteins in an attempt to evade an immune response. However, when LF enters the cytosol and cleaves mNLRP1B between Lys44 and leu45, it removes the autoinhibitory effect of mNLRP1B and exposes the CARD domain of the C-terminal fragment, inducing pyroptosis and inflammation [49][51][52][53][54] by generating an N-terminal fragment (Leu45-mNLRP1B-F983) containing an N-degron which is recognized by N-recognins such as UBR2 and UBR4 and degraded by the UPS ( Figure 5 A) [55][56]. Accordingly, N-recognins UBR2 and UBR4 were identified through genome-wide CRISPR-Cas9 screening to find proteins related to LT-induced NLRP1 inflammasome activity. Moreover, degradation of the N-terminal fragment of mNLRP1B was significantly reduced due to the deficiency of UBR2 and UBR4 in RAW264.8 cells, and the resistance to LT-induced pyroptosis [55][56]. 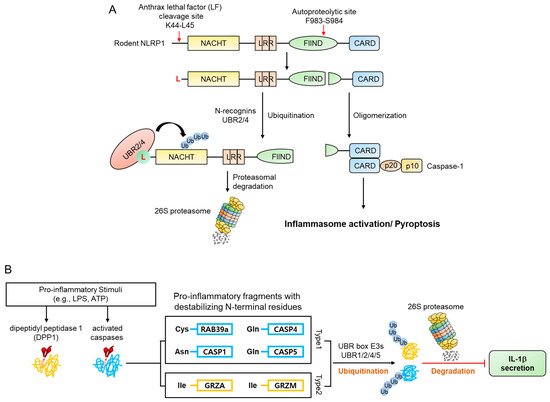 Figure 5. Schematic diagrams describing the regulation of inflammation by UBR box N-recognins. (A) A model depicting LT-induced mNLRPB inflammasome activation by UBR2/4. The anthrax lethal factor (LF) is known to induce mNLRP1B inflammasome activation and pyroptosis. Although the detailed mechanism of LT-induced mNLRP1B inflammasome activation has not been elucidated, it has recently been shown that the Arg/N-degron pathway is involved in mNLRP1B inflammasome activation. LF directly cleaves mNLRP1B to generate an N-terminal fragment and a C-terminal fragment. Despite cleavage into N-terminal and C-terminal fragments by LF, mNLRP1B remains autoinhibited. To activate the inflammasome, the N-terminal fragment of mNLRP1B is degraded in an Arg/N-degron pathway-dependent manner by UBR2 and UBR4, as identified through CRISPR-Cas9 screening. This process releases the CARD domain-containing C-terminal fragment of mNLRP1B and induces pyroptosis through interaction with caspase-1. (B) A model depicting the degradation of proinflammatory fragments mediated by UBR1/2/4/5. Potential proinflammatory Arg/N-degron substrates are generated by activated inflammatory caspases and several other proteases under inflammatory stimuli such as LPS. The resulting N-degron substrates Cys-RAB39a, Asn-CASP1, Gln-CASP4, CASP5, Ile-GRZA, and Ile-GRZM are generated by activated caspases, autoprocessing, or by endopeptidases such as DPP1. These fragments, which can cause an inflammatory response, expose destabilizing residues at the N-terminus. These fragments are recognized by N-recognins and then degraded through 26S proteasome, as evidenced by the depletion of UBR1, UBR2, UBR4, and UBR5, causing a significant reduction in LPS-induced IL-1β secretion.

Replication stress, defined as the slowing or stalling of replication fork progression and DNA synthesis, can cause DNA mutations and chromosomal aberrations [57][58][59]. Thus, failure to counteract genotoxic threats can lead to cancer, developmental disorders, ciliopathies, and laminopathies [58][60][61][62]. Various well-known endogenous and exogenous sources of DNA damage, such as oxidation, chemical mutagens, and ultraviolet radiation, can interfere with the proper progression and completion of the replication process, resulting in genome instability [63][64]. An essential factor of the replication machinery is the proliferating cell nuclear antigen (PCNA) which plays an essential role in maintaining genomic integrity and promoting DNA replication by guiding replicative DNA polymerases at replication forks [65][66]. UV irradiation and various DNA-damaging agents (MMS, mitomycin C, cisplatin, and H 2O 2) lead to the stalling of the replication fork and the release of DNA polymerase from PCNA [64][67][68][69][70][71]. As part of the DNA damage tolerance mechanism, RAD18, a ubiquitin ligase, can monoubiquitinate PCNA, preventing replication fork collapse that can trigger cell death or genome instability by enabling the DNA replication of damaged templates through translesion synthesis (TLS) [72][73]. According to recent studies, SDE2 protein is implicated in genome instability caused by replication stress by modulating this mechanism [74][75].