As a game-changer of science and technology in the late 20th to 21st century, nanotechnology has great contributions in explorations on nanoscale materials and their phenomena. Developments in nanotechnology-based observation/evaluation techniques [1][2][3] and manipulation methods even in atom/molecular scales [4][5][6] open ways to control nanoscale structures and create nano-specific functions such as highly anisotropic electronic and optical properties. These research trends make us realize the importance of nanoscale structures in material functions. In parallel, basic areas and emerging fields for material production have continuously progressed. Functional materials in huge varieties have been prepared and fabricated through efforts in organic synthesis [7][8][9][10], polymer chemistry [11][12][13], coordination chemistry [14][15][16][17], supramolecular chemistry [18][19][20][21], and the other materials science especially for nanostructured materials [22][23][24][25]. Various fabrication techniques including the self-assembled monolayer (SAM) method [26][27][28], Langmuir–Blodgett (LB) technique [29][30], and layer-by-layer (LbL) assembly [ 31,32] have indispensable roles in the developments of functional materials as well as contributions with emerging materials such as nanocarbon materials [31][32] and nanoporous materials [33][34].

On the basis of these developments of science and technology, various functional materials and systems have been continuously produced upon important social demands in energy [35][36][37][38], environmental [39][40][41][42], and biomedical fields [43][44][45][46]. It becomes realized that regulation of nanostructures within materials systems is crucially important for getting better performances with higher efficiencies. Interactions in well-coordinated components leads to efficient processes in many events including conductivity, reactivity, adhesion, and optical response. Both materials’ intrinsic qualities and their precise internal structures are indispensable factors to produce more desirable materials for target functions. Therefore, knowledge and techniques in nanotechnology and the other research fields have to be combined into a unified new paradigm. This task is assigned to an emerging concept, nanoarchitectonics [47].

As the nanotechnology concept is said to be initiated by a lecture by Richard Feynman [48][49], nanoarchitectonics concept in this meaning was first proposed by Masakazu Aono [50][51] at the conference held in 2000. Nanoarchitectonics unifies nanotechnology with other research fields such as organic chemistry, polymer chemistry, materials science, supramolecular chemistry, and bio-related science [52] ( Figure 1 ). Based on the nanoarchitectonics strategies, functional material systems can be produced from nanoscale unit components through the combinations and selections of various effects and the processes including atom/molecular manipulation, chemical conversion, self-assembly/self-organization, field-assisted organization, material processing, and bio-related process [53]. Because molecular and material interactions at the nanoscale cannot ignore the influences of various ambiguities such as thermal fluctuations, statistical distributions, and quantum effects, nanoarchitectonics fabrications are often based on the harmonization of unit processes rather than their simple summation [54]. In many cases of functional materials production based on nanoarchitectonics procedures, several processes are used together and sequential assembly and fabrications are applied. Therefore, the nanoarchitectonics processes are advantageous to produce hierarchical and asymmetrical structures rather than equilibrated self-assembly often used in supramolecular chemistry [55]. These features can be commonly applied to a wide range of materials. Therefore, the nanoarchitectonics concept has been applied in various research fields including materials production [56][57], structure regulations [58][59], catalysis [60][61], sensor [62][63], device [64][65], bio-related science [66][67][68], biomedical applications [69][70], energy-related applications [71][72], and environment-oriented applications [73][74]. 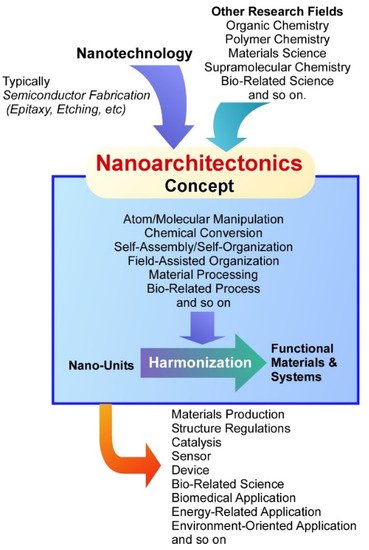 Figure 1. Outline of the nanoarchitectonics concept and contributing fields.

For the preparation of self-assembled fullerene nanocrystals, a simple liquid–liquid interface precipitation method is often used [93][94]. In the liquid–liquid interface precipitation method, the crystal formation mechanism is supposed to be driven by supersaturation of fullerene molecules at interfaces between good solvent (with higher fullerene solubility) and bad solvent (with lower fullerene solubility). Although the preparation procedure of this technique is very simple, fullerene assemblies in various dimensions—including one-dimensional rods /tubes [95][96], three-dimensional cubes [97][98], and their hierarchical nanoarchitectures [99][100]—can be obtained. For example, Sathish and Miyazawa synthesized size-tunable C 60 hexagonal thin crystalline nanosheets through the liquid–liquid interface precipitation method at the carbon tetrachloride (CCl 4)/alcohol interface for the first time [101]. The size of the hexagonal nanosheets could be tailored merely by selecting proper alcohol for the interfacial precipitation. Hexagonal nanosheet with ~7.5 μm diameter was observed for the CCl 4/isopropyl alcohol interface, whereas the hexagonal nanosheets with ~2.5 μm diameter and 500 nm diameter at the CCl 4/ethanol and CCl 4/methanol interface, respectively. This work opens a new door for synthesizing fullerene nanosheets by simple self-assembly. 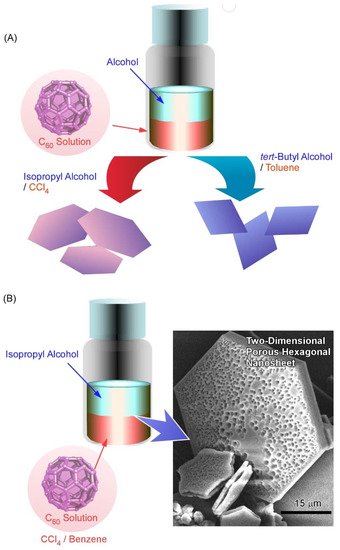 Pore formation within a two-dimensional C 60 nanosheet was achieved by faint adaptations of solvent systems to the liquid–liquid interfacial precipitation system [103]. Two-dimensional nanosheets possessing dimorphic macroporous/interporous structures were fabricated via C 60 assembly at interfaces between isopropyl alcohol and CCl 4/benzene mixtures ( Figure 2 B). At high CCl 4 contents, macropores were formed in the two-dimensional hexagonal nanosheets. In addition, smaller mesopores were also formed within the macropores under suitable mixing conditions between CCl 4 and benzene. The average mesopore sizes came to be 15 to 25 nm and 20 to 40 nm at CCl 4/benzene mixing ratios of 80:20 and 90:10, respectively. The latter two-dimensional structures with bimodal features were accompanied by mixed fcc and hcp crystal structures. It is expected that the evaporation of solvents trapped in them would be the cause of mesopore formation. The formed bimodal nanoarchitectures have high surface areas with enhanced electrochemical activities, which would be useful for energy-related applications.

Chen and co-workers developed a simple but effective co-solvent induced crystal transformation strategy to transform two-dimensional C 60 microplates to nano-meshes made of ordered nanorods ( Figure 3 ) [104]. The transformation was triggered by removing the solvent molecule and then re-incorporating another solvent molecule. Specifically, C 60 plates were obtained first by adding isopropyl alcohol to the CCl 4/ m -xylene mixture with gentle swirling. The C 60 plates were concentrated by centrifugation and then diluted with isopropyl alcohol to transform to two-dimensional mesh networks. After diluting with isopropyl alcohol, the incorporated CCl 4/ m -xylene would then leave the C 60 plate, leading to the formation of pores in the C 60 microplates. Under appropriate conditions, m -xylene can be re-incorporated during the C 60 recrystallization and eventually gives rise to the mesh network. This work opens a new field for designing hierarchical two-dimensional superstructures. The fabricated complicated two-dimensional mesh-like fullerene superstructures would be useful separation and filtration such as oil/water separation and biomolecular segregations. 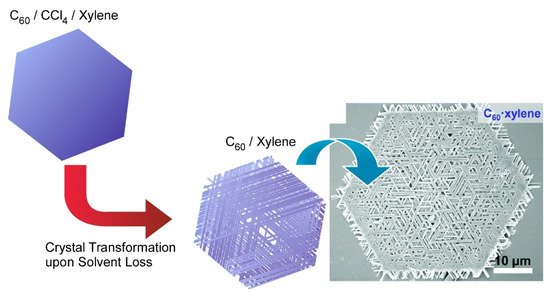 3. Two-Dimensional Nanoarchitecture from Fullerene with Other Component

Steigerwald, Nuckolls, Roy, and coworkers proposed a method that utilizes dimensionally confined fullerene as a strippable layer to obtain two-dimensional fullerene ( Figure 4 ) [105]. They firstly synthesized a layered van der Waals solid from a structure-directing building block and C 60 fullerene by self-assembly method. Transition metal chalcogenide cluster ( Co 6Se 8(PEt 2phen) 6) was employed as the structure-directing building block that associated with C 60 and thereby directed the spontaneous assembly of C 60 into crystalline solid of [ Co 6Se 8(PEt 2phen) 6][C 60] 5. The structure of [Co 6Se 8(PEt 2phen) 6][C 60] 5 is composed of two layers stacked along the hexagonal c -axis in which a slightly corrugated trigonal array of C 60 was separated by a layer comprised of a molecular cluster with stoichiometry [ Co 6Se 8(PEt 2phen) 6][C 60] 2. The intralayer bonding of [ Co 6Se 8(PEt 2phen) 6][C 60] 5 is strong enough while interlayer bonding is weak enough that the layered solid may be mechanically exfoliated. Therefore, they exfoliated the layered crystals to produce two-dimensional sheets as thin as ~130 nm with smooth surfaces and transferred them onto Si wafers. In this example, flexible molecular recognition between fullerene and ligand units enables us to nanoarchitect van der Waals materials from multiple components in desired layered structures. 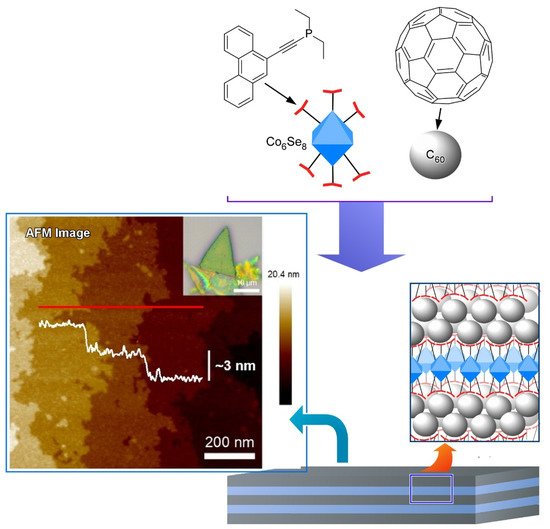 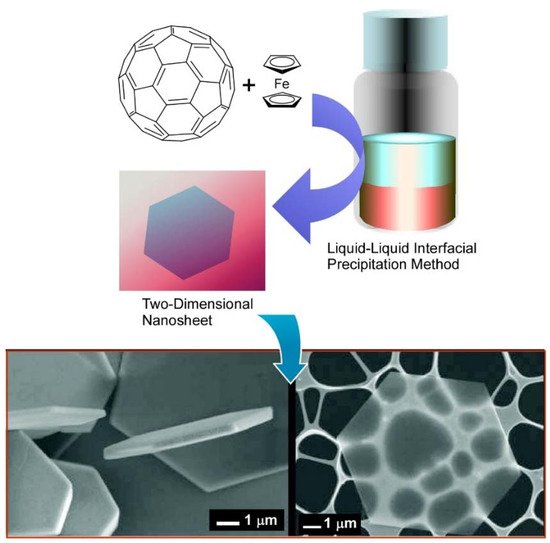 Zeng, Wang, and coworkers reported a two-dimensional molecular template with two types of cavities that have different sizes and symmetry at the liquid–solid interface formed by an azobenzene derivative (NN4A) [108] ( Figure 7 ). Both the A- (diameter: 12.0 Å) and B-type (diameter: 8.6 Å) cavities were large enough in diameter to accommodate guest molecules such as fullerene molecules. Therefore, highly ordered fullerene arrays were constructed at the liquid–solid interface of graphite by coadsorption of fullerenes and NN4A. The experimental and theoretical results indicate that C 60 molecules (diameter:6.80 Å) occupy both types of the cavity, while the larger C 80 (diameter: 8.22 Å) and Sc 3N@C 80 molecules were trapped exclusively in the A-type cavities, which implies appreciable site selectivity. These template-directed fabrications of fullerene arrays provide a new method for the formation of two-dimensional fullerene. 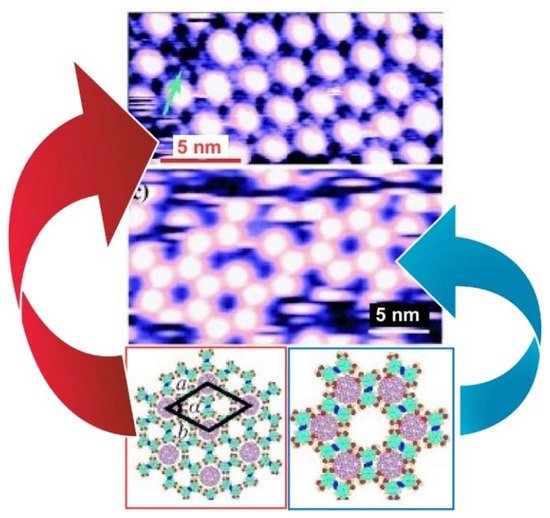 Krishnan et al. demonstrated a modified method to modulate aligning curvature of one-dimensional fullerene ( C 60) nanowhiskers within the two-dimensional film. Instead of using a conventional LB technique, a newly developed vortex LB method was employed for this purpose [110]. The C 60 nanowhiskers floated on a water surface were spontaneously assembled according to rotational flows of water subphase. Their alignment curvatures can be controlled at the position from a center of rotating motions. The aligned fullerene nanowhiskers with controlled alignment curvatures were then transferred onto glass substrates used for the culture of bone-forming human osteoblast MG63 cells. It was observed that the growth of the MG63 cells was highly oriented with an axis of aligned one-dimensional C 60 nanowhiskers. Cell proliferation experiments confirmed the low toxicity nature of the used hierarchical two-dimensional fullerene scaffold, suggesting the potential availability of the proposed method in various biomedical applications.

Very recently, Song et al. investigated the regulation of adhesion and function of human mesenchymal stem cells on two-dimensional fullerene (C 60) nanowhisker nanopatterns with controlled alignments that were prepared with conventional LB technique ( Figure 8 ) [111]. It was found that regenerative capacity and long-term multipotency were enhanced on two-dimensional nanopatterns with highly aligned fullerene nanowhisker arrays. Appropriately architected nanotopographic surface with certain hydrophobicity gave limited contact area between material surface and cells. This situation induced decreased cell spreading and focal adhesion areas of human mesenchymal stem cells. Enhancement of stemness retention of human mesenchymal stem cells would be related to the diminished cytoskeletal tensions. Regulated contact with surfaces resulted in the appropriate cell contractility with localization of Yes-associated proteins in the nucleus. The proposed strategy would be useful in biomedical applications, such as tissue engineering as a platform for in vitro stem cell expansion. This example demonstrates important roles of two-dimensional assembly to bridge single molecules and life control. 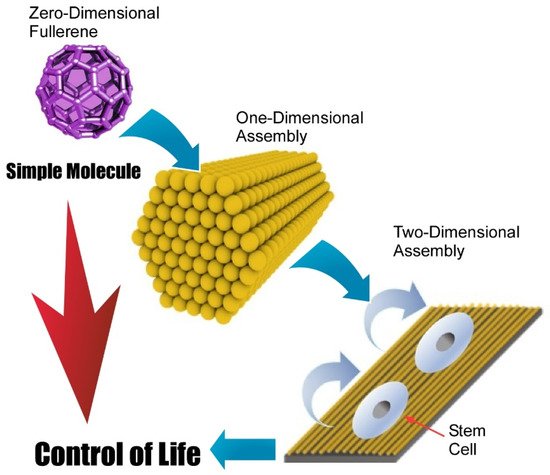