The general concept of massive MIMO is defined as a physical-layer technology which equips each BS with a huge number of active antennas that can be used to spatially multiplex many UEs so that it is possible to communicate with them on the same time-frequency resource. The spectral efficiency per cell can be improved by orders-of magnitude over classical cellular networks by coping with the signal attenuation and interference through spatial signal processing with techniques such as receive combining and transmit precoding. To resume, massive MIMO is an upgraded version of the Space-Division Multiple Access (SDMA), pushing the spatial multiplexing to an extreme level.

In order to improve the throughput, the bandwidth and the spectral efficiency aspects should be exploited. Increasing the bandwidth has its drawbacks, in terms of reducing the Signal-to-Noise Ratio (SNR) by Hertz for the same transmitted power, which justifies the focus of the current works on techniques that improve the spectral efficiency. A well-known way to increase the spectral efficiency is using multiple antennas at the transceivers [1]. In this context, Multiple-Input Multiple-Output (MIMO) communication systems based on the use of an antenna array at the transmitter and receiver, as illustrated in Figure 1 , can offer high-speed transmission with a minimum quality of service guarantee. Energy efficiency is another aspect whose importance has been increasing along with the demand for wireless systems. As these systems expand in different domains (power, antennas, terminals, base stations), power consumption would have grown in an unacceptable manner by using the classical techniques. New architectures and approaches are being developed with the energy efficiency goal [2][3][4][5][6].

The spark in the research and development of MIMO systems was inspired by the work of Foschini [7] and Telatar [8], with results showing a steep linear increase in channel capacity with the increasing number of antennas being presented. MIMO systems allow us to operate two distinct dimensions of a radio link, the first being the diversity and the second being the capacity. Both dimensions have been the subject of research and developments in the recent years: the diversity improves the reliability of the communicating channel by taking advantage of multiple antenna links and the capacity can be increased by using multiple antennas and multiplexing techniques, the information transmitted being maximized through that channel. In addition, instead of increasing the system performance, the total transmitted power can be made almost inversely proportional to the number of transmitting antennas [9].

Since the transmitted signal reaches the receiver through many different paths, the superimposed received signals can either reinforce or cancel each other. When the number of added signals is large, the central limit theorem can be taken into account and a Gaussian distribution can be considered as an approximation [10]. This phenomenon is a microscopic effect caused by small variations in the propagation environment (e.g., movement of the receiver, transmitter, or other objects) regarded as small-scale fading. On the other side, variance is interpreted as the macroscopic large-scale fading, which includes antenna gains, shadowing, pathloss, and penetration losses in Non-Line-of-Sight (NLoS) propagation [11].

We should note that the direction of these vectors has no physical relation with the direction in space (at least a simple one), as we speak about an R -dimensional vector.

The next scenario is characterized by multiple antennas on the transmitter’s side and a receiver with only a single antenna, as shown in Figure 2 .

For the case of a MIMO channel of Figure 3 , we consider T transmitting antennas and R receiving antennas.

Massive MIMO inherits all gains from conventional Multi-User MIMO (MU-MIMO), i.e., with M-antenna BS and K single-antenna users, we can achieve a diversity of order M and a multiplexing gain of min(M,K). By increasing both M and K, we can obtain a huge spectral efficiency and very high communication reliability with simple linear processing such as MRC, Zero Forcing (ZF), and Minimum Mean Square Error (MMSE).

The propagation channel h provides asymptotic channel hardening if (27) | | h k | | 2E { | | h k | | 2} → 1 as M → ∞ . From this definition, we can interpret that the gain | | h k | | 2 of a random fading channel h k is close to its mean value when the number of antennas is very high, so that the deviation from the channel average will vanish asymptotically.

The integration of massive MIMO and mmwave technologies in legacy cellular systems presents considerable challenges, not only at the physical layer but also at the medium access level (see, e.g., [12][13] and references within). To overcome these difficulties, the access should be done in a joint way [14][15].

Fully digital beamforming, or simply digital beamforming, provides the highest flexibility in terms of the possible beamforming algorithms that can be employed. This comes from the fact that, by digitally manipulating the signal, it is possible to adjust the phase and amplitude of each signal that feeds an antenna element. This scenario, shown in Figure 10 , requires each antenna connected to the baseband through a dedicated mixer, a DAC, a filter, and an amplifier, i.e., an entire RF chain. This turns the implementation of digital beamforming in a massive MIMO architecture with hundreds of antennas in an expensive and challenging task due to the high power consumption, complexity, and cost.

Contrary to the conventional MIMO, massive MIMO systems can use linear precoders, such as MRT, MMSE, and ZF in order to reduce the implementation complexity [16].

The performance assessment of these techniques employed on the receiver side was extended to MIMO scenarios in [17]. 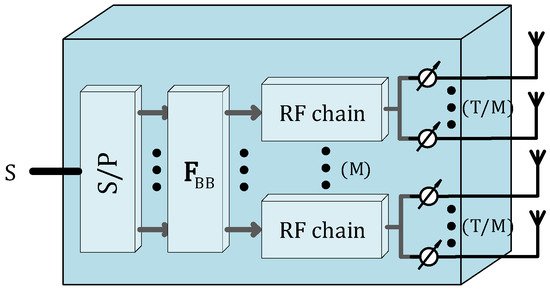