The rodent nasal cavity has mainly two chemosensory sensory organs, the vomeronasal organ (VNO) and the olfactory epithelium (OE). However, recently, another chemosensory receptor in the end of the mouse nasal cavity, the Grueneberg ganglion, has been reported. It detects alarm pheromones and predator odors. The VNO hitherto had been thought to be a chemical detector specialized for pheromones, and the OE a detector of airborne chemicals, handling the role of general olfaction. Furthermore, these receptors’ ligands have almost no overlap; olfactory neurons in the OE express a single type of G-protein-coupled receptor (GPCR), that is, detecting a single ligand, whereas some vomeronasal neurons in the VNO express multiple GPCR types, detecting multiple ligands.

In mammalian reproduction, sexually active males seek female conspecifics, while estrous females try to approach males. This sex-specific response tendency is called sexual preference. In small rodents, sexual preference cues are mainly chemosensory signals, including pheromones. In this article, we review the physiological mechanisms involved in sexual preference for opposite-sex chemosensory signals in well-studied laboratory rodents, mice, rats, and hamsters of both sexes, especially an overview of peripheral sensory receptors, and hormonal and central regulation. In the hormonal regulation section, we discuss potential rodent brain bisexuality, as it includes neural substrates controlling both masculine and feminine sexual preferences, i.e., masculine preference for female odors and the opposite. In the central regulation section, we show the substantial circuit regulating sexual preference and also the influence of sexual experience that innate attractants activate in the brain reward system to establish the learned attractant. Finally, we review the regulation of sexual preference by neuropeptides, oxytocin, vasopressin, and kisspeptin. Through this review, we clarified the contradictions and deficiencies in our current knowledge on the neuroendocrine regulation of sexual preference and sought to present problems requiring further study.

While short-lived microbes have high mutation rates to obtain evolutional benefits against environmental pressure, long-life organisms, such as mammals, use diversity. This intraspecific diversity is achieved by sexual reproduction to disperse genes within conspecifics. To enable sexual reproduction, organisms have sexually differentiated their reproductive roles, resulting in the requirement of interaction with the opposite sex. To successfully breed offspring, animals, particularly small mammals, have evolved systems to find, attract, and approach the opposite sex, by chemosensory signals called pheromones.
The first attempts of systematic behavioral testing for opposite-sex selection or preference in laboratory rodents were reported by Slob et al. [1][2][3][4][5]. To determine the conspecifics an individual is attracted to, while simultaneously presenting various types of stimulus animals, it is possible to measure which animals the test subjects try to approach, investigate, and make contact with. The paired stimuli for simultaneous presentation would be opposing, such as estrous females vs. sexually active males, estrous females vs. anestrous females, and sexually active males vs. castrated males. In early studies, free moving rats were tested in a three-chamber apparatus with side chambers containing male and female stimulus rats unable to move beyond their chamber. In this context, male rats showed an opposite-sex preference by spending longer time in the chamber with estrous females than in that of males (same-sex) [4]. For female rats, however, it was more complicated. Insofar as males can copulate, receptive females prefer sexually inactive males rather than active ones [2], but when direct interactions were blocked by a wire-mesh barrier between them [1] or intromissions were prevented by vaginal occlusion [2], the receptive females showed a clear preference to spend longer time in the vicinity of sexually active male rats.
Therefore, sexual partner preferences, which appear to be simple phenomena, have been found to be influenced by many factors, and do not respond to a simple model of sexually dimorphic brain function. Therefore, we sought to develop a preference test for opposite-sex odors limited to airborne chemicals, components of sexual stimuli [6]. Figure 1A depicts our preference test apparatus in rats. The apparatus was divided into three chambers by spaced triplicate boards with a hole at different levels that enabled airflow. A fan connected to the ceiling of the center chamber helped move the airflow carrying the odors from the stimulus animals in the side chambers to subject rats in the center one. Odors led to subjects poking their noses into the air inlet to investigate them (for easier observation of nose-poking behavior, a transparent tube was attached to the inlets). This apparatus allowed us to obtain clear data on sex-specific odor preference patterns (Figure 1B,C). In this paper, we review recent findings on neural and hormonal preference regulation for conspecific odors in laboratory rodents, mice, rats, and hamsters. 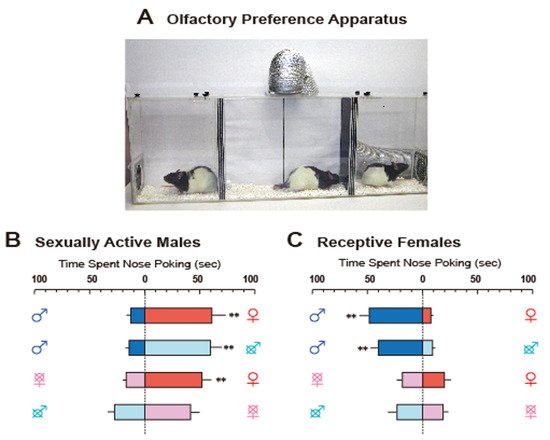 Figure 1. (A). The apparatus for olfactory preference test in rats, consisting of three compartments. Experimental rats were placed in the middle, and stimulus rats were placed in two neighboring side compartments. A fan connecting to the airduct at the ceiling of the middle compartment dispersed airflow from the two side compartments to convey the odors of stimulus rats. A transparent tube was placed on each air inlet in the middle compartment to facilitate observation of nose-poking. (B) and (C). Typical olfactory preference shown by sexually active male rats (B) and receptive female rats (C). Sex symbol characters on both sides of each column indicate the type of stimulus rat. Crosses over the sex symbol characters indicate gonadectomy of stimulus rat [6]. Reprinted with permission from Ref. [6]. Copyright 2004 Elsevier.

The rodent nasal cavity has mainly two chemosensory sensory organs, the vomeronasal organ (VNO) and the olfactory epithelium (OE). However, recently, another chemosensory receptor in the end of the mouse nasal cavity, the Grueneberg ganglion, has been reported. It detects alarm pheromones and predator odors [7][8][9]. The VNO hitherto had been thought to be a chemical detector specialized for pheromones, and the OE a detector of airborne chemicals, handling the role of general olfaction. Furthermore, these receptors’ ligands have almost no overlap; olfactory neurons in the OE express a single type of G-protein-coupled receptor (GPCR), that is, detecting a single ligand, whereas some vomeronasal neurons in the VNO express multiple GPCR types, detecting multiple ligands [10].
Vomeronasal neurons express two classes of receptors: the V1R coupled with Gi2α and the V2R coupled with Goα proteins. In the mouse, vomeronasal sensory epithelium, neurons with V1R in the apical layer project their axons to the rostral part of the accessory olfactory bulb (AOB) and detect small, volatile molecules, while V2R, in the basal layer, project to the caudal AOB region and detect larger, nonvolatile molecules such as peptides and proteins. It has been reported that the use of these vomeronasal receptors differs between males and females [11]. Exposure to soiled bedding collected from sexually active males activates neurons with V2R in the basal layer in estrogen-primed female mice, whereas exposure to estrous female soiled bedding activates neurons with both V1R and V2R in both apical and basal layers in males, but not in estrogen-primed females. Thus, sex differences in V1R and V2R reactivity to the same social chemicals in the peripheral VNO may exist.
Sulfated estrogens are detected as pheromones by V1rj, a V1R subclass, and other unknown molecules in female mouse urine are detected by the V1re and V1rj subclasses, although each one alone has no effect on male mouse behavior. When combined, however, they strongly induce male courtship behavior in mice [12]. On the other hand, darcin (also known as a major urine protein, MUP20), a V2R ligand contained in male mouse urine that provokes aggressive behavior in male mice [13][14], can strongly attract receptive females to the intact male urine [15][16]. In addition, darcin also acts as a reinforcer; that is, when associated with airborne neutral odors in the urine, it produces the learned attraction to male odors in receptive females [15][16]. Exocrine gland-secreting peptide 1 (ESP1) has also been found in the male lacrimal gland as a V2R ligand [17]. Although it has been reported that contact with male mouse pheromone ESP1 enhanced lordosis behavior in receptive females [17], it is still uncertain whether this nonvolatile chemical contributes to the male sexual attraction of receptive female mice. Interestingly, proteome analysis in wild mice (Mus musculus) showed darcin and ESP1 also in saliva [18].
Though olfactory neurons express >900 canonical olfactory receptors in the mouse OE [19], trace amino-associated receptors (TAARs) have received attention as noncanonical olfactory receptors for pheromonal signals [20][21]. All TAARs found in 15 mouse genes and 17 genes in the rat function as olfactory receptors, except for TAAR1 [22]. Deficiency of TAARs 2–9 in male mice has been reported to abolish approach behavior toward receptive females [23], while exposure to isobutylamine, a volatile urinary amine considered to be a TAAR3 ligand, increased the activity in the brain regions related to male sexual behavior in wild type (WT) but not in TAARs 2–9 knock-out (KO) mice [23]. Trimethylamine, a TAAR5 ligand, abundantly contained in male mouse urine (>1000 times that of rat urine), works as an incentive for receptive female mice (but as a repellent for rats). TAAR5-KO females do not approach male mouse urine or trimethylamine [24]. All olfactory neurons expressing TAARs in the OE project their axons to specific (necklace) glomeruli surrounding the main olfactory bulb (MOB) [25][26] specialized in processing biologically significant signals, such as social cues, edible and rotten foods, and predator odors [27].
In addition, some epithelial neurons with canonical olfactory receptors may detect pheromones or other social signals. In fact, epithelial neurons express canonical olfactory receptors and transient receptor potential C2 (TRPc2), similar to VNO sensory neurons with V1R or V2R [28]. At present, the function of these neurons is unknown. What types of stimuli these neurons are sensing, and how they are involved in the perception of opposite-sex odors, are questions that warrant further research.