The phenomenon of overcompensation has been reported in various plant species although it has been treated by some as isolated incidents with only limited values. Reviewing reports on the extensive studies of defoliation in maize showed that different genotypes respond differently to defoliation, varying from phenomenal increase to significant loss in grain yield. The different responses of maize in kernel yield among genotypes to defoliation are confirmed in our experiments conducted in both China and Australia.

Food security is a serious and pressing contemporary issue. With the increase in both the population and the per capita income, global demand for agricultural crops is increasing rapidly. As the potential of arable land expansion is limited, most of the increase may have to come from methods that provide new ways to increase yield per unit area [1]. The massive quantity of this crop species produced worldwide means that even a small percentile change in yield could be substantial in regard to global food security.

Similar to the situations in many other crop species, the trends for increased yield per hectare have dramatically slowed in maize as incremental increases through improved agronomic management and genetic improvement approach their optima. To reach projected demands within the next thirty years, a breakthrough similar in impact to the ‘Green Revolution’ is required. Based on the extensive reports of defoliation in maize as a case study, we argue that the phenomenon that damaged plants may produce significantly more biomass or kernel yield compared with undamaged ones, termed as overcompensation, may offer huge potentials to dramatically enhance productivities of at least some plant species.

Genotypes responding differently to defoliation have been reported in all studies where two or more genotypes were used. [2] found that the impact of defoliation on kernel weight was more severe on newer hybrids in comparison to those older ones. [3] reported that defoliation caused greater grain yield losses for early maturing genotypes in comparison to that of the late maturing ones. Interestingly, Hicks and Crookston (1976) [4] found that defoliation dramatically boosted kernel yield of a short-season hybrid while slightly reduced the yield of a full-season genotype.

It is known that different genotypes produce different numbers of leaves, that leaf numbers for a given genotype change between environments and that genotypes with higher leaf numbers take longer to mature [5]. In other words, two genotypes with the same number of leaves may differ in their physiological stages of development. We thus suggest measuring the physiological growth stage (Ps) when defoliation is conducted by dividing the leaf number with the total number of anticipated leaves a genotype would produce in a given environment. Using such a measurement should make results from genotypes belonging to different maturity groups more comparable.

Results from our own experiments showed huge variation in the effects of defoliation on kernel yield (Table 1) (unpublished). The large genotypic variations in response to defoliation make it more difficult to adopt the practice directly in maize production. With the availability of such large differences in genetic variation, all is required for a successful breeding program is to identify the conditions when a few genotypes give a positive response. speciesArabidopsis thaliana[6] provides further evidence suggesting that targeting this phenomenon in breeding should be feasible.

3. Genotype, Environment, as Well as Method and Timing of Defoliation, Are All Critical for Positive Maize Yield Response

The first reports on maize defoliation appeared more than a century ago and they were conducted with the aims of investigating damages from hail [7][8], pathogens, or insects [9]. Results from most studies show that mild defoliation (removing 25% or less of the leaves) has little impact on grain yield irrespective of when (developmental stages of plants) However, plants at different growth stages respond very differently to more severe defoliation. Further, the impacts of defoliation on grain yield also differ with different methods of leaf removal.

However, significant increases in grain yield following defoliation have also been reported from several of these early defoliation studies. [4] found a significant increase in grain yield, varied between 30% and 80% with an average of 48% over 3 consecutive years. The authors noticed that the defoliated plants quickly developed new leaf tissue and little difference in total leaf or stalk tissue between the defoliated and control plants remains by tasselling. However, a similar study conducted at a similar time in Illinois found that defoliation at early seedling stage resulted in an 11% yield reduction [2].

It is interesting to note that, like those obtained in other regions [10], the best responses to defoliation were all obtained by cutting plants below the collar of the second leaf around D5. Defoliation carried out earlier or later is more likely to lead to yield decrease (Figure 1) [11]. However, as discussed below, leaf numbers cannot be used to reliably identify physiological stages of plant development. Using leaf numbers to determine the time of defoliation can thus be one of the reasons contributing to the different responses among different genotypes. 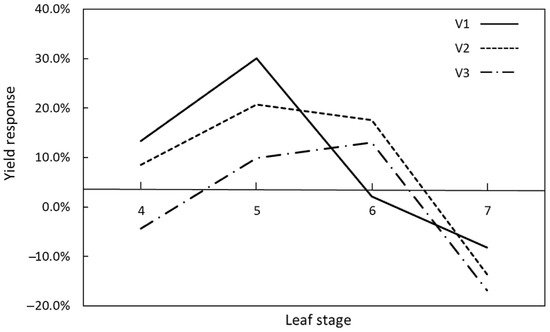 In assessing possible changes in photosynthesis following defoliation, chlorophyll in leaves was measured. It was found that chlorophyll content was significantly increased during grain filling [15]. We have also noticed that defoliation delays kernel maturity only slightly but its impact on plant senescence under dry conditions can be huge (Figure 2). As green plants are essential for making quality silage, the delayed senescence should facilitate the production of high quality silage by widening the harvest window.

Figure 2. Defoliation dramatically delayed plant senescence under dry conditions. The photo was taken from a trial conducted in Queensland, Australia. The trial was irrigated weekly with about 40 mm of water until tasselling. It was noted that the color of cobs on the defoliated plants indicated that they reached physiological maturity while the plants were still green.