Microneedling significantly enhanced transdermal delivery of both ALA and TMP in vitro. The MN hydrogel-forming system was comparable with the MN dissolving system for ALA delivery (~3000 nmol/cm2over 6h), however superior for delivery of the much larger TMP molecule (~14 nmol/cm2over 24h, compared to 0.15 nmol/cm2). Thus, these results have opened the potential for investigating microneedling with many other PSs.

Historically, phototherapy can trace its roots to Ancient Egyptian, Chinese, and Indian civilizations. Light combined with photosensitizing natural formulations were used to treat illnesses such as vitiligo, psoriasis, and skin cancer. In 1900, Raab and von Tappeiner described the phenomena of cell death induced by a combination of chemicals (acridine dye) and light on the protozoa paramecia ( Figure 1 ) [1]. Further investigations gave birth to the revolutionary Photodynamic Action . The first biomedical use of this innovation was reported by Friedrich Meyer-Betz, in 1912, who self-injected hematoporphyrin, resulting in pain and swelling on light-exposed areas [2]. Subsequently, in 1961, Lipson et al. demonstrated that hematoporphyrin derivatives (HpD) accumulated in tumors and emitted fluorescence could be applied as a diagnostic tool [3].

The distinctiveness of PDT relies on its highly selective mechanism of action. Utilizing two independently nontoxic components (i.e., a PS and light) to produce cytotoxicity within a tumor. There is a high level of tumor selectivity to PS due to increased tumor vasculature surface area, higher membrane permeability of cancer cells, and decreased lymphatic drainage [9]. An ideal PS remains inert until a light source is focused onto the intended area to “activate” the PS, boosting its selectivity over surrounding healthy tissues. Ultimately, a third intrinsic component for PDT, molecular oxygen, present in tissue’s extracellular and intracellular spaces, serves as the substrate for ROS formation. The generation of singlet oxygen and superoxide anions results in tumor cytotoxicity as both can directly react with and damage biomolecules such as lipids, proteins, and nucleic acids [10].

Several studies have demonstrated PDT as a viable treatment option against early-stage esophageal dysplasia, lung, HNSC, anal, bladder, peritoneal ovarian, and non-melanoma skin cancers (NMSC) [11]. Despite the encouraging clinical results of PDT, some PSs themselves have been reported to have prolonged skin phototoxicity, low lesion selectivity, hydrophobic nature, aggregation proneness, poor bioavailability, high-dose requirements, adverse side effects, off-targeting, and development of drug resistance [12][13][14]. The use of drug delivery systems (DDS) to overcome these shortcomings has been examined. In this context, PSs can be ideally delivered to therapeutic action sites while reducing adverse side effects [14]. Among DDS, the transdermal route stands out for dermatological applications. However, the inherent protective epidermic layer, the high molecular weight of some PSs (>500 Daltons), and extremes of polarity remain a challenge for crossing the skin barrier [15].

The skin barrier is a lipid layer along which individual molecules can migrate through diffusion. Although skin has a large surface area, transdermal drug delivery is challenging since it acts as a formidable barrier. Molecules can enter through keratinocytes (the transcellular pathway), the lipid matrix occupying the intercellular spaces (the intercellular pathway), hair follicles, sebaceous glands, or sweat glands (the transappendageal pathway) [16]. The process is controlled mainly by the molecule’s permeant hydrophilicity, size, and hydrogen-bonding ability [17]. Consequently, substances with molecular weight lower than 600 Da, water/octanol partition coefficient (logP values) in the range of 1–3, and those with a low melting point can be more easily absorbed into the skin. In contrast, larger molecules and highly polar compounds cannot pass the cutaneous barrier [18].

From the penetrant perspective, the skin behaves like a mechanical nanoporous barrier perforated by many gap-like or quasi-semicircular pathways. Previous studies estimate an average passage-width range of 0.4 to 36 nm. Arguably, pore-size distribution is non-symmetrical, with a peak around 20 nm and a steeper decline on the transbarrier pathways’ low-sized side. Moreover, existing data demonstrate that the critical factor for hydrophilic entity motion through the skin is primarily molecular size and not molecular weight [19]. Thus, several parallel physiological paths between two cells increase the skin porosity, which is crucial for topical drug delivery.

One extensively investigated strategy to enhance drug delivery through the skin is by adding chemical enhancers such as fatty acids, surfactants, esters, alcohols, pyrrolidones, amines, amides, sulphoxides, terpenes, alkanes, and phospholipids. Conversely, mechanical, physical, and active transport techniques, such as microneedles (MNs), jet injectors, iontophoresis, ultrasound, electroporation, photomechanical waves, magnetophoresis, laser radiation, and skin abrasions, are also available to enhance skin penetration [18]. The use of chemical enhancers is restricted due to the limited permeability of macromolecules, while physical approaches are invasive and can damage the skin barrier properties ( Figure 2 ). To overcome some limitations of chemical and physical enhancers, nanoparticles are being developed to improve the absorption and transdermal drug release in a controlled manner for a prolonged period.

The application of nanotechnology for conventional PSs has helped to overcome many shortcomings, particularly related to the hydrophobic nature of these compounds, which limits the penetration through the skin and cell membranes [13][20]. While hydrophobic PSs, such as phthalocyanines (Pcs) and chlorins, form aggregates in physiological solutions [21], hydrophilic PSs raise interaction problems with biological tissues. In this context, liposomes have been reported as suitable delivery systems for carrying both hydrophilic and hydrophobic PSs and leading to improved clinical applications [22]. For instance, the extensively studied PS, 5-aminolevulinic acid (ALA), is not internalized well by cells and has no specificity for diseased tissues [20]. Therefore, PSs associated with nanoparticles have evolved to avoid self-aggregation and improve delivery to the target site.

Furthermore, Primo et al. reported the synthesis and in vitro characterization of magnetic NE with mTHPC. Their results suggested that magnetic NE improves the penetration of mTHPC in skin layers leading to an adequate accumulation in vivo . The retention studies showed that the PS concentration in deep tissue layers was significantly higher in the presence of magnetic nanoparticles, making possible its topical application in skin cancer PDT protocols and hyperthermia activation in synergic procedures [23].

Although the superiority of liposomal PSs was not initially demonstrated [24], in 2001, Pierre et al. proposed modified liposomes having lipid composition similar to the mammalian SC to optimize ALA transdermal delivery in skin cancers [25][26]. The liposomal vesicles containing 5.7% ALA showed higher skin retention ( p < 0.05) on the epidermis with a decrease of skin permeation compared to an aqueous solution [26]. Likewise, ALA liposomal formulations resulted in prolonged ALA-induced PpIX accumulation, as well as better epidermal targeting [27]. Additionally, enhanced ALA penetration with hydrophobic derivatives of ALA (ALA-esters, ALA-amino acid derivatives, and ALA dendrimers) showed promising results in vitro [28]. However, although some ALA-esters yielded strong in vivo results, only the MAL formulation is currently used in cutaneous malignancies [29]. 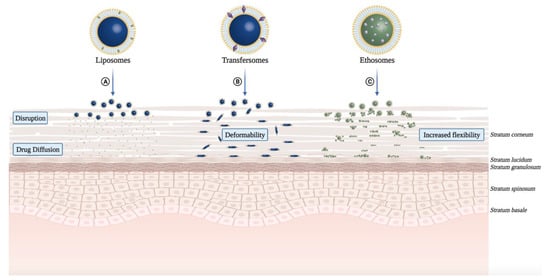 The controlled disruption and ablation of the SC, the predominant barrier for topical drug delivery, can be achieved via microneedling, radiofrequency (RF), and lasers. Recently, the concept of using a laser to treat the skin has attracted increasing attention. Laser-assisted drug delivery (LADD) involves controlled, selective destruction of the epidermis and dermis to allow for penetration and absorption of topical medications and large drug molecules. Challenges in predicting LADD’s efficacy and safety include: the unpredictability of drug dosing and possible systemic toxicity, variability in absorption, induction of localized and systemic hypersensitivity, and inconsistencies in treatment protocol [31] ( Figure 4 ).

However, although the positive results of LADD-ALA-PDT were observed, a comparative study by Chen et al. to evaluate ALA-PDT revealed that plum-blossom needling (a method of shallow insertion of multiple needles into the skin) had more broad diffusion of ALA than the CO 2 AFXL while having a similar clinical effect at a much lower cost. A clinical trial also revealed that the surface fluorescence intensity was stronger in needle-pretreated-lesion than in laser-pretreated-lesion. It appears that plum-blossom needling treatment may be clinically superior for enhancing ALA-tDDS and other topical skin medications [32]. 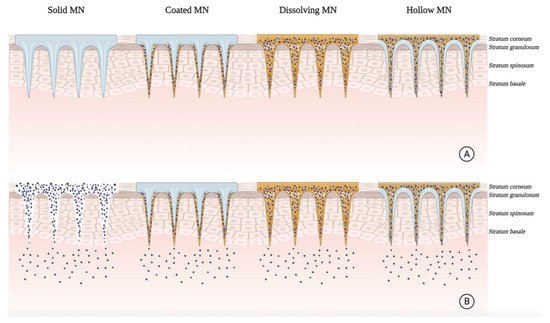 Intradermal delivery of the preformed near-IR PS: 5,10,15,20-tetrakis (2,6-difluoro-3-N-methyl-sulfamoylphenyl bacteriochlorin (Redaporfin TM ) using dissolving MNs was successful in vitro and in vivo to treat nodular BCC. MNs demonstrated complete dissolution 30 min after topical application and revealed sufficient mechanical strength to penetrate 450 μm depth of the skin. In vitro studies illustrated that the drug delivery and detection was 5 mm in-depth of the skin. In vivo biodistribution studies in athymic nude mice showed both fast initial release with localized drug delivery. The MN-treated mice showed a progressive decrease in the PS at the application site over 7 days. However, most of the skin surface showed fluorescence levels comparable to those seen in the negative control group. These results suggested beneficial effects for polymeric MN arrays in minimally invasive intradermal delivery to enhance PDT in deep skin lesions [34].