Pancreatic ductal adenocarcinoma (PDAC) is a malignancy with a poor prognosis and low survival rates. PDAC is characterized by a fibroinflammatory tumor microenvironment enriched by abundant fibroblasts and a variety of immune cells, contributing to its aggressiveness. Neutrophils are essential infiltrating immune cells in the PDAC microenvironment. Recent studies have identified several cellular mechanisms by which neutrophils are recruited to tumor lesions and promote tumorigenesis.

Neutrophils are the most abundant immune cells in circulation and form an essential part of the innate immune system to respond against infection and inflammatory insults. Recent studies discovered an early homogeneous neutrophil progenitor subset in human bone marrow defined by surface markers CD71 and CD117 [1]. However, the role of neutrophils in tumor development is still unclear. Some studies have proposed classifying tumor-associated neutrophils (TANs) into two polarization states, tumor-suppressing N1 neutrophils and tumor-promoting N2 neutrophils [2]. On the other hand, exposure to TGF-β transforms neutrophils to the N2 phenotype [2]. N2 neutrophils have been reported to have strong immunosuppressive and tumor-promoting functions, including the promotion of tumor metastases and angiogenesis [3][4].

One way the tumor evades the host immune system is through a group of heterogeneous immature myeloid cells, called myeloid-derived suppressor cells (MDSCs). MDSCs suppress immune responses by multiple signaling pathways. MDSCs can induce antigen-specific CD8+ T cell tolerance via generating reactive oxygen species (ROS) and peroxynitrite [5]. In addition, MDSCs suppress natural killer (NK) cell cytotoxicity by inhibiting the activation of Stat5 [6]. Markers for MDSCs include CD33 and CD11b in humans and Gr-1 and Cd11b in mice [7]. Based on phenotypic features, MDSCs can be characterized into two major types, monocytic MDSCs (M-MDSCs) and granulocytic MDSCs (G-MDSCs) [8]. Mouse M-MDSCs are Ly6G−Ly6 Chigh, and G-MDSCs are Ly6G+ Ly6 Clow [9]. In humans, CD66b and CD15 are markers for M-MDSCs and G-MDSCs [9]. However, it is believed that the MDSCs described in most studies are, in fact, a subset of neutrophils [10][11] due to a significant overlap in the expression of functional molecules or surface molecules between neutrophils and G-MDSC [12].

2. Interactions between Neutrophil and Tumor

Neutrophils can be recruited to the PDAC microenvironment via multiple tumor-secreted factors (Figure 1). 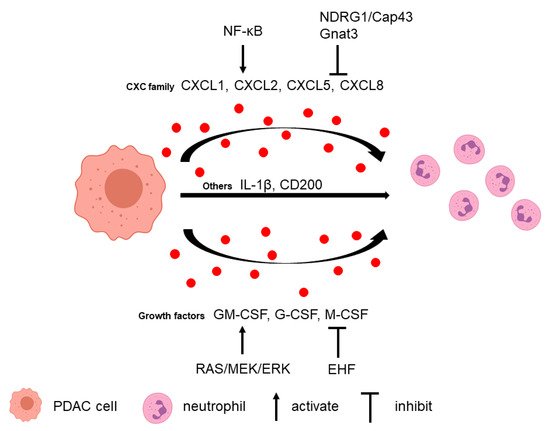 3. Interactions between Neutrophil and TME

In addition to tumor cells, T cells in the TME contribute to the recruitment of neutrophils (Figure 2). 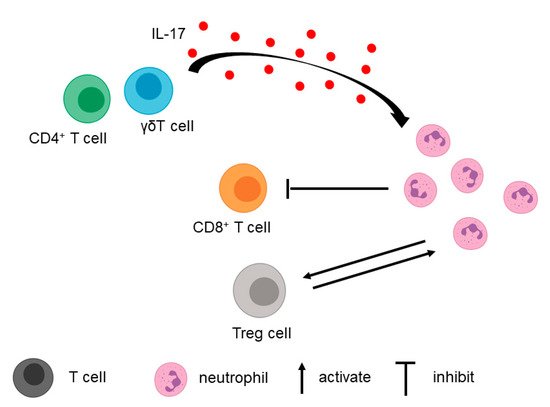 Pancreatic stellate cells (PSCs) and CAFs are essential components in the pancreatic TME. These stromal cells also interact with immune cells, including neutrophils. One study demonstrated that PSCs induced MDSC expansion in the orthotopic PDAC model [18]. In the same study, co-transplantation of PSCs and tumor cells significantly increased G-MDSCs infiltration in the tumor [18]. In turn, neutrophil DNA could activate PSC and increase PSC proliferation, enhancing the production of the matrix metallopeptidase 2 (MMP2) and matrix metallopeptidase 9 (MMP9) secreted by PSCs through interaction with the receptor for advanced glycation end productions (RAGE) [19]. Another study showed infiltrated neutrophils in PDAC reprogramed the functional status of stellate cells, which included reduced collagen production and increased protease synthesis of PSCs [20].
Tumor-associated macrophages (TAMs) are also significant components of the microenvironment and have been demonstrated to be correlated with worse patient prognosis in PDAC [21]. In a preclinical model, targeting both neutrophils and macrophages enhanced chemotherapeutic efficacy and improved the survival of mice with orthotopic PDAC tumors [22]. In breast cancer, IL-10 from MDSCs reduced IL-12 production by macrophages, resulting in the polarization towards an M2 phenotype [23]. Further studies on the interaction between neutrophils and macrophages in PDAC would be beneficial.
Additionally, neutrophils can reprogram the extracellular matrix of PDAC. Targeted depletion of G-MDSC in the KPC mouse model decreases ECM deposition and the appearance of patent blood vessels, with increased vessel diameters [16]. Neutrophil-derived MMP9 has a direct and robust proangiogenic effect independent and additive to PDAC-derived VEGF [24].

The formation of neutrophil extracellular trap (NET) is a cellular function of neutrophils. Release of NET, called NETosis, is considered a defense mechanism to trap and kill bacteria and other pathogens.

Many studies have demonstrated that pancreatic cancer cells induce NET formation. For example, the conditioned media from PDAC cell line AsPC-1 was able to induce NET formation, and NETs could promote AsPC-1 cell migration and invasion as well as angiogenesis in vitro [25]. Another group found that conditioned media from KPC cells previously exposed to IL-17 induced NETosis in mouse neutrophils in vitro [26]. Moreover, serum from PDAC patients significantly increased NET formation and reduced NET degradation [26]. Tumor-derived protein tissue inhibitor of metalloproteinases-1 (TIMP-1), which correlated with poor prognosis in PDAC, directly triggered the formation of NETs. This effect depended on the interaction of TIMP-1 with its receptor CD63 and subsequent ERK signaling [27]. In addition to tumor cells, CAF-conditioned media can also induce ROS-dependent NETosis by secreting Amyloid β A4 protein. In turn, NET formation promotes CAF expansion, contractility, and deposition of matrix components supportive of tumor growth.

5. Clinical Implications of Neutrophil and NET in PDAC

The neutrophil-to-lymphocyte ratio (NLR) offers critical prognostic information in PDAC as well as breast cancer, lung cancer, and other types of cancer [29][30]. Studies have demonstrated that increased NLR correlates with a poor prognosis in patients with resectable and unresectable pancreatic cancer [22][31][32][33].

5.2. Neutrophil as a Potential Therapeutic Target in PDAC

The existing treatment of PDAC patients includes surgical resection, chemoradiation therapy, and immunotherapy, but only a small proportion of patients benefit from available therapies. Based on an increasing understanding of the role of TME in PDAC, neutrophils have emerged as a potential therapeutic target.

The majority of neutrophil targeting preclinical studies use CXCR2 inhibitors or Ly6G antibodies [22]. This approach is in line with the main classes of current and past drug targets being receptors, among others [35]. In addition, the preference of CXCR2 as a target might lie in the fact that CXCR2 blockage not only inhibits the CXCL5/CXCR2 axis but also blocks the effect of other ligands of CXCR2, including CXCL1–3 and CXCL6–8. In breast cancer, CXCR2 inhibitors were demonstrated to be safe and tolerable, and relevant clinical trials are currently underway (NCT02370238) [36]. However, ligands, including cytokines, have become more important drug targets in the past two decades, largely due to the increased antibody-based therapies. Although no study was found in PDAC, CXCL5 inhibition emerged as a new strategy to attenuate tumor angiogenesis and thus slow tumor progression [37].

More and more studies show that neutrophils play crucial roles in influencing the PDAC microenvironment and PDAC progression. The interactions among neutrophils, PDAC cells, and other components in TME are complex and are regulated by several signaling pathways. In addition, several parameters related to neutrophils are used as potential biomarkers for predicting clinical prognosis in PDAC patients. Moreover, unraveling the exact mechanisms of neutrophil function in PDAC development and new findings in preclinical and clinical studies will undoubtedly further our understanding of PDAC pathophysiology and provide a breakthrough in the treatment.