The Hula Valley in northern Israel was partly covered by swamps and a shallow lake. The entire valley was drained and converted for agricultural cultivation. Later, an additional soil reclamation operation was implemented, including eco-tourism. From the early 1990s, winter migratory cranes have attracted visitors, thus supporting the hydrological management of the entire valley that protects the downstream Lake Kinneret.

The region that is geographically defined as the Hula Valley (altitude between 100 and 60 mbsl) has a surface area of about 200 km2 and provides about 7% of the watershed basin of Lake Kinneret [1] (Figure 1). The historic Hula wetland area within the valley generally refers to about 60 km2 of the entire valley [1][2][3]. The regional climate conditions are Mediterranean [1], with an annual winter rainfall of 350–850 mm, followed by a hot and dry summer. The temperature minima and maxima are, respectively, 18 and 35 °C in summer and 3 and 20 °C in winter [3][4]. The Hula Valley and the surrounding slopes are one of the most ancient human habitats [5], dating back to 73,000 BC. 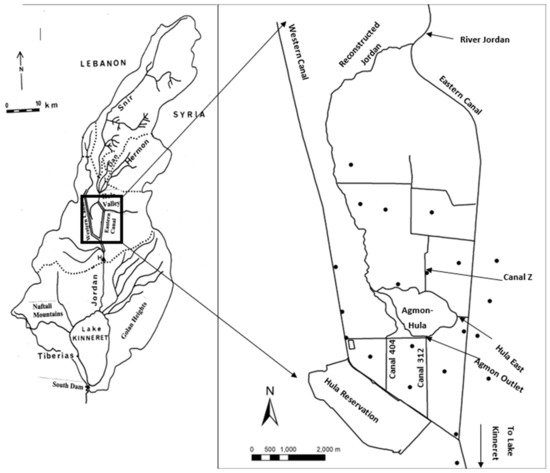 Figure 1. Geographical maps of the Lake Kinneret watershed with inflow rives (left) and the Hula Valley (right). Bore holes drills are indicated (black spots).
The Kinneret drainage basin (2730 km2, altitude range 2284–2260 mbsl) is located mostly to the north of the lake. Its maximum length from north to south is 110 km, and the width is 50 km [6]. During the past 80 years, the Lake Kinneret drainage basin ecosystem has undergone significant anthropogenic and natural modifications. Prior to the 1950s, the Hula Valley was mostly (6500 ha) covered with old Lake Hula (1300 ha) and swampy wetlands. This area was not cultivated, malaria was common, and water loss by evapo-transpiration (ET) was high. The Jordan River, which crosses the Hula Valley, contributes about 63% of the downstream Lake Kinneret’s water budget and 70% of the total nutrient inputs, of which over 50% originate from the Hula Valley region, including the valley and the slopes on both sides (east and west) of it. The old Lake Hula and its swamps were drained and converted for agricultural development. After the Hula drainage, the dominant N flux from the peat organic soil was modified from ammonium to nitrate. As a result of raw sewage removal and fishpond restrictions, the organic nitrogen flux into Lake Kinneret significantly reduced. As a result of inappropriate irrigation and agricultural methods, the peat soil quality deteriorated due to consolidation, destruction, and surface subsidence. This deterioration was accompanied by heavy dust storms [6] blocking drainage canals, due to peat organic soil dryness, resulting in deep cracks. This was followed by oxygen penetration, which accompanied exogenic decomposition of organic matter and heating, creating underground fires. The underground cracks, together with cultivated plant mater, immediately were populated by severe outbreaks of rodent populations. These deterioration processes caused severe damage to agricultural crops.

The Hula Reclamation Project (HRP) (Figure 1) was consequently implemented. The implementation of the HRP resulted in modifications to land use, which affected the regime of nutrient supply to Lake Kinneret. The HRP included the creation of a new shallow lake named Agmon (surface area 820 ha, mean depth 0.2 m, volume 0.164 × 106 m3) [7]; the renewal of 90 km drainage and water supply canals, placing a vertical plastic barrier of depth 4.5 m such that it spanned a distance of 2.8 km along the valley from east to west; maintenance of a higher underground water table; and functional conversion of 500 ha of the Hula Valley land, including Lake Agmon in the center, from agricultural to eco-tourism usage. The objectives of the HRP were (1) nutrient removal from the Lake Kinneret external loads through the Lake Agmon hydrological system; (2) production of an ecological component for eco-tourism, i.e., Lake Agmon; (3) usage of Lake Agmon as a principle component of hydrological management and agricultural irrigation for the entire valley; (4) improvement of irrigation water supply through portable computerized spray water lines; (5) maintenance of a high underground water table to enhance peat soil moisture and prevent peat soil quality deterioration; and (6) re-establishment of highly diverse natural flora and fauna, with emphasis on aquatic birds.

1.3. Cranes in the Hula Valley

In the early 1990s, peanut cultivation became attractive due to its high beneficial value and productive success as a result of the suitability of the peat organic soil. The winter migrators, cranes (Grus grus), on their long-term southern traditional migration to Africa, discovered some leftover peanuts after harvest [8][9]. Thus, the flocks massively landed in October–November in the Hula Valley. The population of cranes in the Hula Valley therefore increased. Unfortunately, when the rains came, the wet peanuts started to ferment and became less attractive to the cranes, resulting in their looking for other food sources, thereby causing damage to agricultural crops. At this point, a conflict arose: on the one hand, cranes attracted bird watchers (eco-tourism), but on the other hand, crop damage became common, where significant water supply enhanced agricultural development, which was damaged by the birds [10][11]. The rationale behind the Hula Reclamation Project was the protection of the Lake Kinneret water quality, combined with the production of beneficial (income source) crops for the citizens of northern Israel. The advantages of the Hula Reclamation Project included additional water allocation and improvement of the canal and irrigation systems (portable computerized spray lines) to improve crops, as well as development of eco-tourism where the soil was unsuitable for agriculture [7][12]. The increase in the crane population resulted in damaging these benefits. 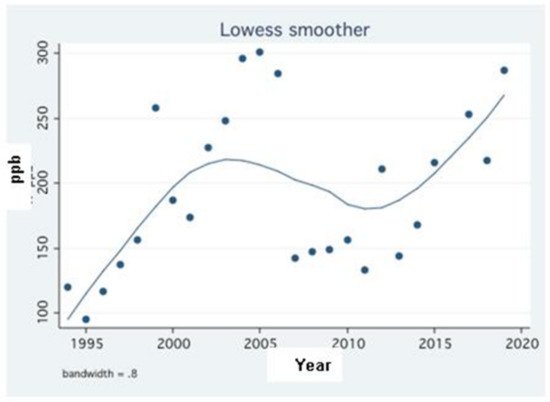 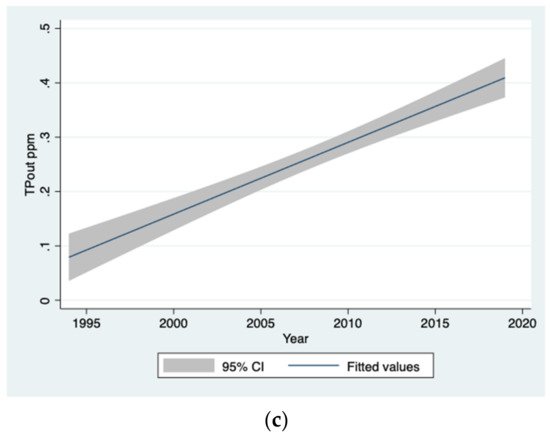 Figure 4. Fractional polynomial regression between monthly (a) and annual (b) means (1994–2018) of TPout concentrations (ppm).

Figure 7. Monthly mean (1994–2018) fluctuations of TP concentrations (microgram/L; ppb) in the Lake Agmon outflow: Left: fractional polynomial regression. Right: LOWESS smoother plot (bandwidth = 0.8). Trends are arrowed.
The significance of the controversial conflict between the three ecological compartments is better understandable by supplemental information about the financial management of the crane project during the winter of 2020–2021 (O. Barnea, Director of the Agricultural Society of the Upper Galilee municipality, unpublished):