Traumatic spinal cord injury (SCI) is one of the most devastating diseases and results in severe motor and sensory dysfunction below the level of injury.

Traumatic spinal cord injury (SCI) is one of the most devastating diseases and results in severe motor and sensory dysfunction below the level of injury. It causes primary injury to both neuronal axons and myelin sheaths, which is followed by secondary injury and reactive gliosis, which leads to further neurological damage [1][2][3]. The secondary injury after SCI involves the release of cytotoxic factors, tissue edema, decreased blood flow, and accelerated apoptosis [4][5]. The prolonged inflammatory reaction and limited regenerative ability both restrict the restoration of function. The current strategies for restoration can be divided into neuroprotection and neuroregeneration according to the different time-points, although there is no definitive discrimination. Neuroprotection aims to reduce the inflammatory response, which could induce neurons or supportive cells to undergo apoptosis or necrosis. Neuroregeneration aims to reduce the inhibitory effect of extracellular materials and to promote the regrowth of neurons or axons. Because of the limited regenerative capability and the presence of inhibitory materials at the injury site, effective treatments for SCI are not currently available.
In 1996, Cheng et al. led a study and concluded that adult rats with SCI could have partial recovery of hindlimb function after nerve transfer and acidic fibroblast growth factor (aFGF) [6]. His study group in Taiwan then performed several studies to support the promising therapy [7][8][9][10][11][12][13]. This therapy may be one of the multi-modality treatments for SCI.
The omentum flap is a tissue with many capillaries, which can promote the absorption of tissue edema and blood clotting. The post-injury fibrinogens, which form fibrin scars, are also reduced [14]. Professor Rafael et al. published several studies about the treatment of Cervical Spondylotic Myeloradiculopathy (CSM) with surgical decompression and omental transplantation [15]. Both neurological improvement and a vertebral osseous density increase were noted. Duffill et al. conducted a clinical study of 17 patients with chronic SCI who underwent omental transposition. The interval from injury to transposition ranged between 1.5 and 36 years. They placed the pedicle omentum flap directly on the pia surface of the cord. The results showed a minor improvement without a significant difference [14][16][17][18]. The authors believed that the omental flap may still be applied for increased blood supply. According to the mechanism of omentum transposition, early transposition would be more effective to reduce scar formation.

Omental tissue is a highly vascularized organ and a rich source of angiogenic factors. A new omental dissection method was designed. The greater omentum consists of a thin double layer of mesothelial cells that is attached to the greater gastric curvature. It folds back on itself and returns to the transverse colon and reaches beyond to the posterior peritoneum. Rat omental pedicle was excised and characterized by immunohistochemical staining. It showed that omental tissue is rich in laminin (green-labeled tissues, Figure 1A) because it was strongly immunoreactive to laminin. Laminin is a glycoprotein which is a constituent of basement membranes [19]. It is also found to promote neuron axonal regeneration after injury [20]. Omental tissue is known to be rich in vascular endothelium. In the present study, the RECA-1-immunoreactive cells (red color, Figure 1B) could be detected. Under the microscope, the rat omentum was marked obviously with laminin and RECA-1. We also found that the omentum is rich in adipocytes, which have a lower density and can be suspended in PBS after centrifugation. This characteristic is quite similar to that of fat tissue (Figure 1). 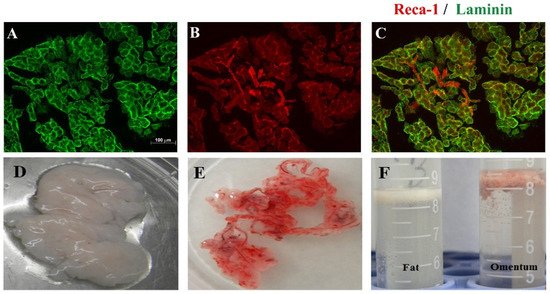 3. Beneficial Effect of the Omentum Graft in Contusive SCI Rats

Traumatic injury to spinal cord initiates a series of cellular and molecular events. Early intervention may limit the extent of tissue injury. Because no resorption of the omentum occurs, it is necessary to trim all tissue and use only the amount necessary to reconstruct the wound. The vascular anatomy of the omentum permits the isolation of a flap within the major omental graft. A piece of omentum graft was implanted to the injury epicenter immediately after eliciting severe contusive SCI in the rats. The hindlimb performance of these SCI rats was monitored weekly up to 6 weeks post-injury. The time course of hindlimb locomotor recovery (the BBB score) in SCI rats treated with saline or omental graft was recorded (Figure 2). Beginning 3 weeks post-treatment onward, the omentum-grafted SCI rats maintained significantly higher BBB scores, indicating functional recovery throughout 6 weeks post-injury (from the 3rd to the 6th week, 5.0 vs. 8.2, 5.2 vs. 8.3, 5.3 vs. 8.4, 5.5 vs. 8.6, p < 0.05, respectively). 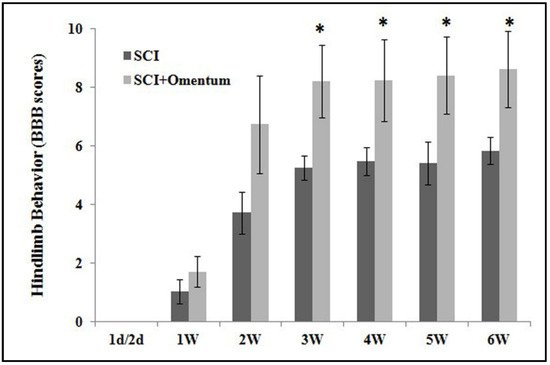 Figure 2. Time course of hindlimb locomotor scores in contusive SCI rats treated with saline or omentum graft. Locomotor recovery of contusive SCI rats was evaluated over a 6-week period, using a 21-point BBB score. The hindlimb recovery of the SCI rats was assessed in a double-blind manner. n = 9, 7 rats for groups of SCI, SCI + Omentum, respectively. Results are demonstrated as mean value ± SEM. * p < 0.05, SCI versus SCI + Omentum by a one-way ANOVA followed by Bonferroni post hoc test. There were significant differences between the two groups from 3rd to 6th weeks after treatment (p < 0.05). The omentum graft demonstrated a beneficial effect in contusive SCI rats.
At 6 weeks post-injury, the two groups of contusive SCI rats with or without omentum graft were anesthetized and perfused intravascularly with 4% paraformaldehyde. The thoracic regions of the spinal cords were sectioned in the sagittal plane (10 µm thick) and processed for hematoxylin and eosin (H&E) staining as well as IHC. The result showed that the omental graft better preserved the injured spinal cord, compared to SCI without treatment (Figure 3). The quantitative results of H&E staining showed that the omental graft significantly reduced the cavity (43.9 ± 2.1 vs. 24.4 ± 3.0, p < 0.05) in the injured epicenter of the spinal cord (Figure 3B). Further histological assessment with immunofluorescent class III β-tubulin staining in longitudinal spinal cord sections was consistent with the results of H&E staining. As shown in Figure 4, the omentum-grafted contused rats had higher axonal densities in the lesions at 6 weeks after SCI (Figure 4B3 compared to Figure 4A3). Quantitative stereological analysis of tissue areas (areas 2, 3, 4) revealed a significant difference in area 3 (9.9 ± 2.3 vs. 17.2 ± 1.4, p < 0.05) among the samples studied (Figure 4C–E). The omentum-grafted rat spinal cords possessed more preserved class III β-tubulin (+) nerve fibers than those of contusive SCI rats without treatment. 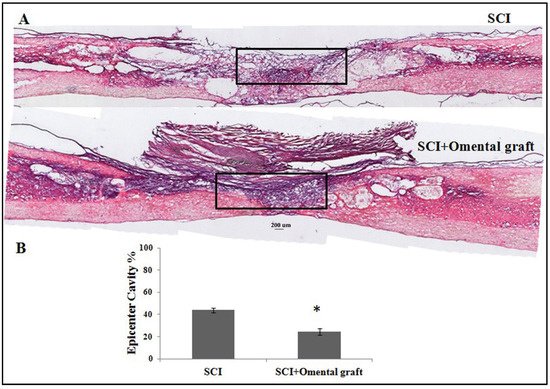 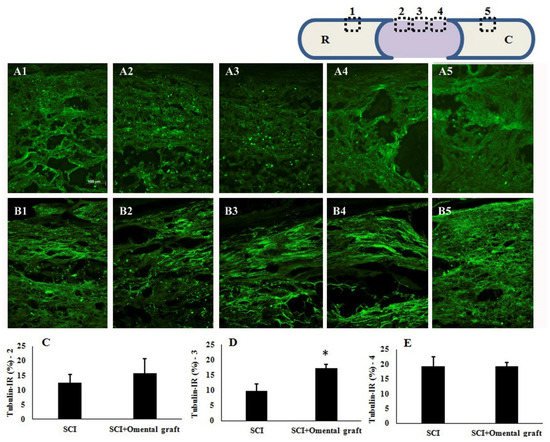 Figure 4. Effect of an omental graft on the morphology of spinal cords in contusive SCI rats at 6 weeks post-injury. (A1–A5) Figure shows representative class III β-tubulin immunoreactivity (IR) in the injured epicenter of the thoracic spinal cord in contusive SCI rats. Scale bar = 100 μm; ×200; (B1–B5) Class III β-tubulin IR in the injured spinal cords of omentum-grafted rats. (C–E) Quantification of class III β-tubulin-immunoreactive axons in areas A2 (or B2), A3 (or B3), and A4 (or B4), respectively, of spinal cord sections. The upper right scheme demonstrates the location of photos A1–A5 and B1–B5 taken from the longitudinal spinal cord section (R: rostral; C: caudal). Note the significant preservation of class III β-tubulin-positive nerve fibers in area B3 of the omentum-treated groups at 6 weeks post-injury (* p < 0.05). The results are demonstrated as mean value ± SEM.