The term “inappropriate secretion of thyroid-stimulating hormone; IST” was proposed by Gershengorn and Weintraub in 1975. In a subsequent report, IST was described as a condition characterized by elevated serum levels of immunoreactive thyroid-stimulating hormone (TSH) in the presence of elevated free thyroid hormone concentrations. Similarly, the term "syndrome of IST (SITSH)" is widely used in Japan to refer to a closely related condition; however, unlike that for IST, an elevated serum free triiodothyronine concentration is not a requisite criterion for SITSH diagnosis. IST or SITSH is an important indicator of resistance to thyroid hormone β (RTHβ) caused by germline mutations in genes encoding thyroid hormone receptor β (TRβ) and TSH-secreting pituitary adenoma.

Inappropriate secretion of TSH (IST) is characterized by the laboratory findings of elevated free thyroxine (T4) and triiodothyronine (T3) concentrations in the presence of detectable TSH concentrations [3][4], contrary to what happens in the most common forms of hyperthyroidism (Figure 1 A). This abnormal pattern in the thyroid function test is an important hallmark of genetic and acquired disorders of the hypothalamus-pituitary-thyroid axis (HPT-axis), including resistance to thyroid hormone β (RTHβ) caused by germline mutations in genes encoding the β isoform of the TR (TRβ) and TSH-secreting pituitary adenoma (TSHoma). Although previous review articles have sufficiently investigated several conditions associated with IST, little information is available on systematic pathophysiological aspects of IST in previous review articles. In addition, a recent study has revealed that diagnostic delay and inappropriate treatments (e.g., pituitary surgeries in patients with RTHβ or thyroid ablation in patients with TSHoma) are still provided in several cases with thyroid hormone profiles suggestive of IST [5].

The term “IST” was proposed by Gershengorn and Weintraub in 1975 [6]. In a subsequent report, IST was described as a condition characterized by elevated serum levels of immunoreactive TSH in the presence of elevated free thyroid hormone concentrations [3]. However, it has been suggested that TSH secretion is compensatory and appropriate in RTHβ, because the response to thyroid hormones in peripheral tissues is reduced due to impairment of the TR [7]. Beck-Peccoz et al. also suggested that the definition of “IST” appears inadequate, as it does not reflect the pathophysiological events underlying TSHoma and RTHβ [4]. Therefore, the authors proposed the term “central hyperthyroidism” instead of IST, because TSH itself is responsible for the hyperstimulation of the thyroid gland and the consequent thyrotoxicosis.

The term “syndrome of inappropriate secretion of thyroid-stimulating hormone (SITSH)” has been widely used in journal articles and textbooks written by Japanese researchers since the late 1980s. Based on the 2016 Japan Thyroid Association (JTA) guidelines for the diagnosis of RTHβ, SITSH is defined as being characterized by elevated free T4 and normal-to-elevated TSH concentrations [8] (Figure 1 A). An elevated serum free T3 concentration is not a requisite criterion for SITSH diagnosis. The author conducted a MEDLINE search using the keyword “SITSH” to retrieve relevant articles published between 1975 and 2020. The literature search yielded 30 articles, of which 28 were published in Japanese institutions. The similarity in the spelling of SITSH to that of SIADH (syndrome characterized by the inappropriate secretion of antidiuretic hormone) might be responsible for the wide use of SITSH in Japan.

Sufficient evidence has been accumulated for several conditions associated with IST, as summarized in Table 1. In a recent study reported by Campi and colleagues [5], the term “genuine IST” was used to indicate the etiology of IST, including TSHoma, RTHβ, and a syndrome clinically and biochemically indistinguishable from RTHβ but without mutations in the TRβ gene (non-TR-RTH). 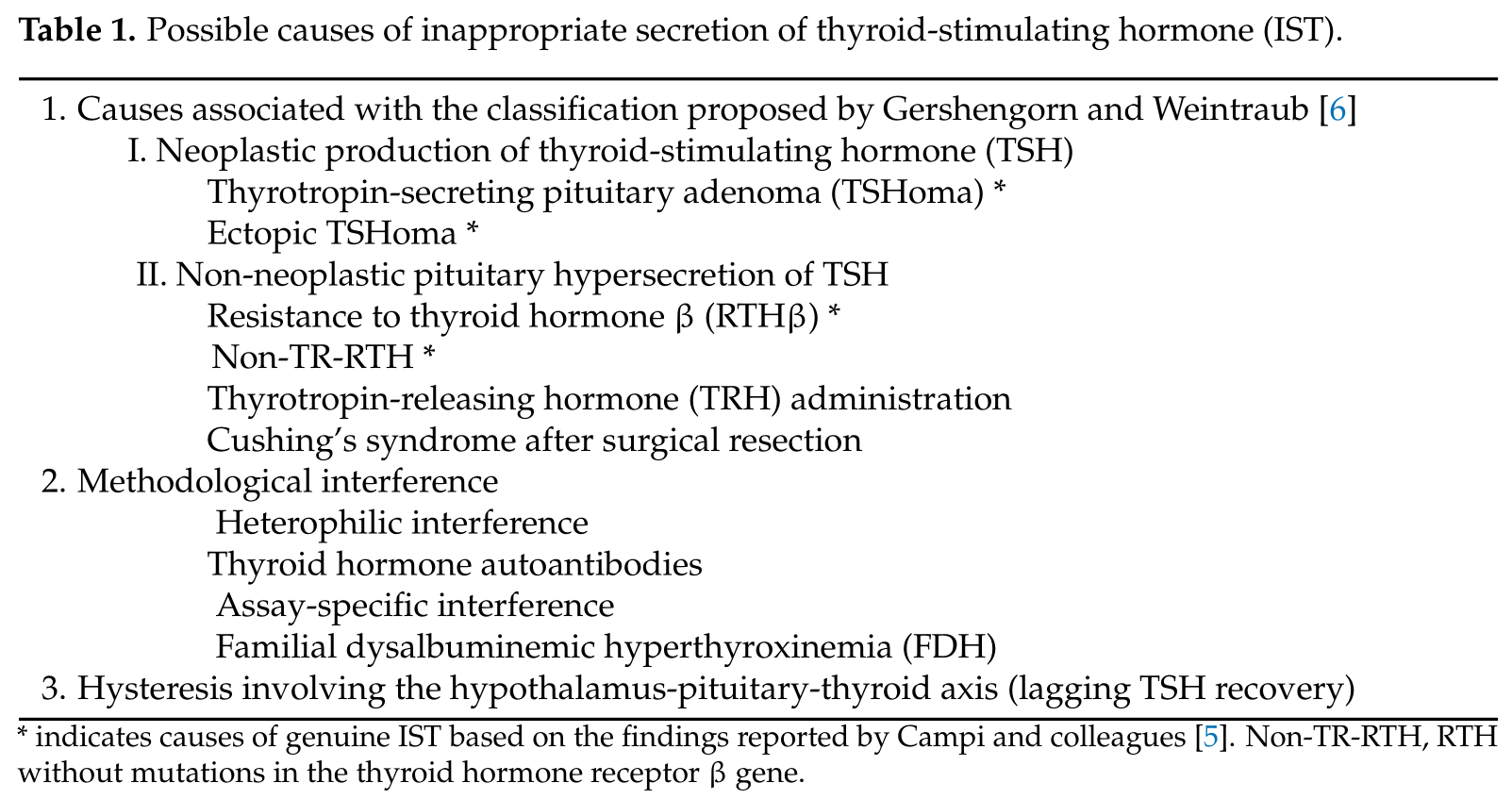 Gershengorn and Weintraub proposed a classification of IST in terms of its pathogenesis [6]. The major classification was dependent on whether IST was either associated with a neoplasm (class I) or was not (class II). Neoplastic IST (class I) was further classified based on tumor location (i.e., class I-A; pituitary tumors and class I-B; non-pituitary tumors (ectopic production)). Non-neoplastic ISTs (class II) were classified into three groups: RTH (class II-A), abnormal stimulation of TSH secretion by thyrotropin-releasing hormone (TRH) or other stimulators (class II-B), and defective suppression of TSH secretion by somatostatin, dopamine, or other suppressors (class II-C).

When Gershengorn and Weintraub proposed their classifications, clinical entities of I-A and II-A had been documented, but other classes were only postulated [6]. Subsequent studies have revealed that several conditions or situations are associated with IST, as proposed by the authors.