Table 1. Significance level (p-value) for the analysis of variance (ANOVA). Source of variations include plant and block as main effects on stem and leaf carbon stock (stem, leaf), aboveground (AGB) and belowground (BGB) carbon stock in biomass in 2017 and 2018 in biomass cropping systems, southern Ontario, Canada.

Table 2. Aboveground (2017 and 2018) and belowground (2018) biomass carbon stock in bioenergy crops and averages for woody and herbaceous cropping systems on marginal lands in southern Ontario, Canada. Standard errors are in brackets. 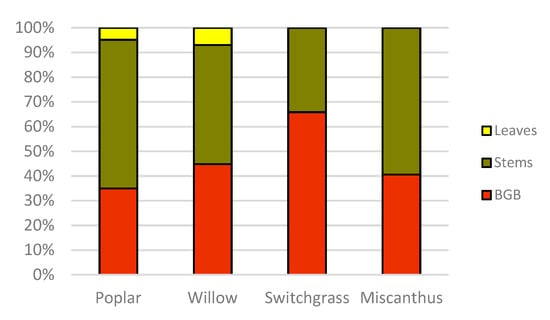 Results indicate that woody biomass systems (willow and poplar) and switchgrass significantly increased SOC between 2009 (baseline) to 2018 (Table 3), while miscanthus failed to reach significance. In this context, the 2018 SOC sequestration values were not significantly different across all biomass cropping systems (Table 4). The average SOC in 2018 in woody and herbaceous cropping systems were 80.1 and 73.8 Mg ha−1, respectively (Table 5). SOC sequestration gains (∆SOC) for switchgrass, willow, poplar, and miscanthus were 11.8, 11.7, 10.3, and 7.7, Mg ha−1, respectively (Table 5).

Table 4. Significance level (p-value) for the analysis of variance (ANOVA). Source of variations include plant and block as main effects on total organic carbon sequestration (SOC) in 2009 and 2018 and long-term soil carbon sequestration between 2009–2018 (∆SOC), total carbon pool at the system-level in 2018 (CPool) and system-level carbon gain (SLCG) in biomass cropping systems, southern Ontario, Canada.

Quantified SLCGs from 2009 to 2018 were compared among all four bioenergy cropping systems (Table 4, Figure 2) and ranged from 9.7 Mg ha−1 for miscanthus to 14.9 Mg ha−1 for willow. The average SLCG in woody and herbaceous cropping systems from 2009 to 2018 was 13.3 and 11.8 Mg ha−1, respectively (Figure 2), which were not significantly different (Table 4). In the same period, when we consider biomass crop types, switchgrass and willow gained 4.4 and 3.3 Mg ha−1 more system-level carbon in their respective systems compared to miscanthus and poplar, respectively (Figure 2).

In the literature, for short rotation willow and poplar plantations, belowground biomass accumulation has been reported as 1.8–3.5 Mg ha−1 y−1 for first rotation (e.g., [4]) and 2.4 Mg ha−1 y−1 for a five-year-old (second cycle) short rotation [5]. Similar to the results derived from this study (Table 2), Coleman et al. [6] have also reported that the mean belowground biomass for willow and poplar clones were 16.51 and 8.79 Mg ha−1 (7.88 and 4.19 Mg C ha−1 y−1), respectively. Zan et al. [7] have reported an annual belowground C in the root biomass for switchgrass and willow in southwestern Quebec, Canada, over a three-year period to be 1.06 and 1.25 Mg C ha−1 y−1, respectively. These numbers are comparable to the numbers derived in this study (0.94 and 1.12 Mg C ha−1 y−1 for switchgrass and willow, respectively, Table 2). However, their numbers may be slightly higher than those reported in our study because they measured belowground biomass up to 60 cm soil depth compared to the 30 cm soil depth in our study. Therefore, results from perennial biomass studies suggest that if unproductive agricultural lands in Canada are converted to perennial biomass crops, irrespective of the type of biomass crop (herbaceous or woody), considerable amounts of atmospheric C can be stored in belowground components of the crop.

Results from this study suggest that the higher allocation of C in leaves in willow provides a potential for increased C inputs to soil via litterfall contributing to soil organic carbon (SOC) sequestration. Our findings also indicate that herbaceous biomass crops can contribute to SOC sequestration enhancement. Collectively, belowground biomass C allocations quantified in all biomass crops tested in this study suggest that they can contribute significantly to enhance SOC sequestration over the years, as they are perennial in nature. Agostini et al. [8] have reported that annual C inputs from miscanthus roots were about half that of switchgrass, given similar turnover time. However, in our study (Table 2), belowground biomass C was not significantly different between miscanthus and switchgrass, with values of 8.45 and 7.45 Mg C ha−1 for switchgrass and miscanthus, respectively. It is also worth noting that roots of herbaceous crops contributed, on an average, more than half of the total plant C (53.2%) compared to woody crop roots (39.9% of total tree C). This is particularly important as the C stock of roots have been neglected and not been estimated in most studies ([9][10] from [11]).

Both woody biomass cropping systems and the switchgrass system were able to increase SOC significantly (p < 0.05) in the nine-year period, while miscanthus failed to reach significance. However, when 2018 SOC sequestration values were tested across all biomass cropping systems, results indicate that SOC values were not significantly different from each other (Table 4), while willow sequestrated numerically the highest amount of SOC at 80.6 Mg ha−1 (Table 5).

It is interesting to note that the difference in SOC sequestration (∆SOC) between the woody and the herbaceous systems was only 1.2 Mg ha−1 between 2009 and 2018, which was not significant. Therefore, results from this study suggest that ∆SOC in perennial biomass systems may not be influenced by the biomass type.

Root C input from belowground biomass and fine-root turnover can significantly contribute to increases in SOC under woody and switchgrass cropping systems [7][12]. Liebig et al. [13] monitored switchgrass bioenergy production in central and northern Great Plains, USA for a five-year period and reported that the cropping system significantly affected change in SOC and increased it at a depth of 0–30 cm at a rate of 1.1 Mg C ha−1 year−1 (4.0 Mg CO2 ha−1 year−1). In contrast to switchgrass [7], miscanthus has root crowns, resulting in a reduction in the proportion of fine roots compared to switchgrass, which could contribute to reduced SOC gains over the years. This could have been the reason as to why SOC gain was low for miscanthus compared to switchgrass in this study (Table 5).

Based on total C pool values, it is obvious that the willow system has the largest C pool compared to all tested biomass systems (Table 5). The total C pool in woody crop systems was also significantly higher (97.2 Mg ha−1) than herbaceous cropping systems (89.4 Mg ha−1). This finding is supported by other studies which report that the annual net SOC storage change exceeds the minimum mitigation requirement under perennial energy crops by far [8]. Similarly, Carvalho et al. [14] have suggested that if the current bioethanol sector (such as corn and sugarcane) is changed to bioenergy feedstocks with more allocation to belowground C it could increase soil C stocks at a much faster rate. Other reports have also shown that the proportion of the total system C (biomass + root + SOC) in a willow bioenergy system was 14.4% and 15.6% more than in switchgrass and corn systems, respectively [15].

It is interesting to note that in Table 5, total C pool was significantly (p < 0.05) higher in the willow system compared to all other tested biomass crops in this study. This is mainly due to significantly (p < 0.05) higher aboveground biomass C (Table 2) and numerically higher belowground biomass C (Table 2) compared to other tested biomass crops. Willow has the ability to coppice more vigorously after each harvest than poplar and also adapts itself better than other biomass crops on low-productive or marginal lands [16]. The total C pool values reported in this study are within the previously reported range of values, 12–175 Mg C ha−1 [11][17][18].

Differences in SLCGs were not significantly affected by bioenergy crops (Table 4). However, considering the numerical values, results suggest that when we compare SOC pools of all tested woody and herbaceous biomass systems, willow and switchgrass are sequestering C in the soil in measurable quantities (Table 5, Figure 2).

These results indicate that willow cropping systems are able to gain 1.66 Mg ha−1 carbon annually at the system-level, which is the highest C gain among all other bioenergy crops in this study on marginal lands in southern Ontario, Canada. This can be attributed to the higher contribution of coarse and fine root C, as well as annual leaf litter in willow system. However, slowly decomposable rhizomes are incorporated into soil organic matter in herbaceous cropping systems. Carvalho et al. [14] concluded that the belowground biomass C pool plays a critical role in building and maintaining SOC, especially due to rhizodeposition inputs and the higher potential of C retention rates. Chemical composition of belowground biomass can also explain the higher C retention rate as roots have a higher concentration of phenolic and lignaceous compounds [19], and enhance soil aggregation, which increases the physical protection of organic C added into the soil [20].

Coleman et al. [6] reported an increase of 1.16 Mg C ha−1 y−1 for SOC stocks in concentrated short-rotation woody production systems (willow and poplar), which is supporting the results derived in this study. Several studies [7][8][21] show that deciduous woody cropping systems contribute greater levels of SOC than herbaceous systems due to leaf litter inputs and higher rate of root turnover. The fine roots in willow cropping systems are often a focal point of belowground C sequestration because they represent a vital biomass C of the total willow root C [22]. Soil depth and texture should be considered when comparing soil C inputs from belowground biomass in woody and herbaceous bioenergy crops. This study was conducted in a marginal sandy-loam textured soil with a depth of only 0 to 30 cm. However, soil C sequestration up to a depth of 1 m will provide more value, especially when dealing with perennial biomass cropping systems [23]. Therefore, SOC data from this study are likely underestimating the total soil C pool. In a 30-year simulation study the belowground inputs to soil C from miscanthus were 34% of the total inputs, and it could be as high as 60% when considering a rooting depth of 1 m [14].

Empirical and modeled studies also suggest that increases in soil clay content can reduce root contributions to soil C and in such cases, it is more likely that aboveground C inputs dominate the top 30 cm of soil C over time [14][22][24]. The 30-year simulation study in a soil with 29% clay showed a net increase in the soil C pool of 5.7 Mg ha−1, where root systems were responsible for 46% of the total inputs. However, in a very clayey soil, root systems had a lower total contribution to the soil C pool (18%) and the main portion of this input resulted from mortality and incorporation of roots and rhizomes during soil preparation at replanting [14].

Overall, results from this study suggest that both woody biomass cropping systems (poplar and willow) and switchgrass are able to increase SOC significantly in the nine-year period of this study (2009–2018). However, carbon gains at the system-level (SOC + Root C + Leaf litter C + Fine Root C), did not significantly differ between woody and herbaceous systems during the study period (Figure 2). The findings show that the woody systems may have an advantage over herbaceous biomass systems based on the numerical SLCG values. It will be interesting to monitor as to how these systems will differ in their C sequestration numbers into the future as both, woody and herbaceous systems, are considered to be productive for up to 22 years [16].

Above- and belowground biomass C and SOC contributed to the total C pool, which was significantly higher in woody bioenergy cropping systems and highest overall in the willow system. Therefore, these findings demonstrate that the willow bioenergy cropping system sequestered significantly more atmospheric CO2 than all other tested systems, suggesting it has the potential for producing bioenergy with the lowest net CO2 emissions.

Across Canada, it is estimated that there are approximately 9.5 million ha of potentially useable marginal lands, and there are close to 1 million ha in Ontario alone [25]. Given the willow cropping systems’ C gain per year (1.66 Mg C ha−1 y−1), if this system is established on all 9.5 million ha of marginal non-agricultural lands in Canada, the maximum per year gain will be more than 15,770 Gg C y−1 or 57,876 Gg CO2 y−1, which is 8% of the total annual Canadian GHGs emissions (716,000 Gg CO2 y−1) [26]. Therefore, based on our results, there is considerable potential for terrestrial C sequestration in Canada and Ontario by converting low quality agricultural lands to biomass production.