DNA damage response and repair (DDR) genes are necessary to maintain the integrity of cell DNA. Alterations of these mechanisms have been found in many cancer types, and may influence treatment outcomes as well as the prognosis of cancer patients. Recently, several treatment strategies taking advance of the presence of DDR alterations are emerging in oncology.

The dysfunction of DNA repair machinery ultimately leads to the accumulation of somatic mutations, increasing the risk of developing cancer [1]. Six main DNA repair pathways operate depending on the type of DNA damage. Single-stranded breaks (SSBs) can lead to the activation of four different repair mechanisms based on the damage: base excision repair, nucleotide excision repair, mismatch repair, and translesion synthesis. Damage involving both DNA strands (double-stranded breaks) can activate two compensatory pathways: homologous recombination repair (HRR), an accurate system that uses a complementary strand from a sister chromatid to reproduce the original DNA sequence, and non-homologous end-joining, which is more error-prone as it utilizes no or limited homologous sequences to restore the damaged strand [2]. An increasing number of genes that help the DNA repair machinery to function have been identified, and the inherited deficiency of several genes, such as BRCA1/2, ATM, and PALB2, are linked to the predisposition of developing PC [3][4][5]. In particular, germline or somatic mutations of BRCA1, BRCA2, PALB2, ATM, and CHEK2 have been reported in 20% of PDAC, while a deficiency of HRR genes was documented in 15.4% of PC and ATM mutations in 9–18% of PC [6][7][8]. DDR deficiency is known to co-segregate with improved response to platinum derivatives consistently with the mechanism of action of these agents. Moreover, deficient DDR machinery can enhance an immune response in multiple ways, providing the rationale for the combination of DDR-targeting agents and immunotherapy [9]. The number of antitumor agents taking advantage of DDR deficiency is constantly expanding and many trials are ongoing (Table 1), hopefully to provide increasing treatment possibilities for PC patients.
Table 1. Ongoing trials evaluating activity and efficacy of PARP inhibitors in PC (Clinicaltrials.gov last accessed 10 June 2021).

Poly-ADP-ribose polymerase inhibitors (PARPis) take advantage of the concept of synthetic lethality, which is defined by the combination of inactivating mutations in two or more different genes essential for cell integrity, inducing cell death [10]. The PARP-1 gene is involved in several phases of the DNA repair machinery, especially in preventing SSBs [11]. Thus, PARPis determine the accumulation of unrepaired SSBs, which are converted into DSBs during cell replication (Figure 1). In this scenario, the concomitant presence of HRR deficiency, such as BRCA1/2 inactivating mutations, enhances a predisposition to synthetic lethality [12]. 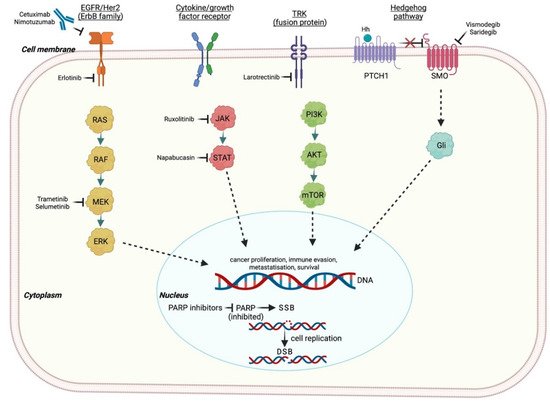 At the time of this review, olaparib represents the only approved PARPi in PC. The phase II trial conducted by Kaufman et al. evaluated olaparib monotherapy (400 mg twice daily) in patients with recurrent cancer that harbor germline BRCA1/2 mutations [13]. Twenty-three patients with PC who received a prior treatment with gemcitabine were included in the study. The objective response rate (ORR) was 21.7% (95% CI, 7.5 to 43.7), and stable disease (SD) lasting ≥8 weeks was observed in 34.8% of patients. A promising median progression-free survival (PFS) of 4.6 months and overall survival (OS) of 9.8 months were also documented. Olaparib approval in PC was obtained following the results of the randomized, double-blind, placebo-controlled, phase III POLO trial. A total of 154 patients with metastatic PC and a germline mutation of BRCA1/2 who did not progress during first-line platinum-based chemotherapy were randomized to receive olaparib monotherapy (300 mg twice daily) or placebo as maintenance therapy [14]. Median PFS was significantly prolonged in the olaparib group (7.4 vs. 3.8 months; HR 0.53; CI 95% 0.35–0.82; p = 0.004), while median OS was similar between groups. Notably, two studies evaluating the combination of olaparib and chemotherapy are discontinued due to severe toxicity issues [15][16].

Veliparib is an oral PARPi with lower PARP trapping ability compared with Olaparib [17][18]. A single arm, phase II trial tested this agent at a dose of 400 mg twice daily in previously treated stage III/IV PC patients with a germline BRCA1/2 or PALB2 mutation [19]. Unfortunately, no tumor response was documented, but SD lasting ≥4 months was observed in 25% of patients. The addition of veliparib (80 mg twice daily on days 1 to 12 every 3 weeks) to cisplatin, plus gemcitabine chemotherapy (25 mg/m2 and 600 mg/m2, respectively, both on days 3 and 10), was recently evaluated in a two-arm, phase II trial enrolling 50 patients with stage III/IV untreated PC and a germline BRCA1/2 or PALB2 mutation [20]. Both arms demonstrated high antitumor activity, with a disease control rate (DCR) of 100% in the combination arm versus 78.3% in the chemotherapy alone arm (p = 0.02), although no significant difference in ORR was observed (74.1% vs. 65.2% in the triplet and doublet arm, respectively; p = 0.055). Conversely, a notable increase of hematologic toxicities was reported in the combination arm. Veliparib was also tested, in addition to modified FOLFIRI, as a second-line treatment for metastatic PC patients, showing no additional benefit among biomarker unselected patients [21].

The single-arm phase II RUCAPANC study investigated efficacy and safety of the oral PARPi rucaparib (600 mg twice daily) among 19 patients with pretreated locally advanced/metastatic PC harboring a germline or somatic BRCA1/2 mutation [22]. Rucaparib demonstrated an acceptable toxicity profile and provided clinical benefits, as ORR was 15.8% and DCR was 31.6%. Rucaparib (600 mg twice daily) was then investigated as maintenance monotherapy in a single-arm phase II trial, enrolling patients with advanced pancreatic cancer and harboring a BRCA1/2 or PALB2 mutation but who did not show PD following at least 4 months of platinum-based chemotherapy [23]. Again, this agent showed encouraging antitumor activity with a safe toxicity profile, as median PFS was 9.1 months, ORR was 36.8%, and 89.5% of patients achieved DCR lasting ≥8 weeks.

Talazoparib is a novel, potent oral PARPi. The two-part, dose-escalation, phase I trial by de Bono et al. tested this agent in patients with advanced solid tumors and a germline BRCA1/2 mutation [24]. Talazoparib showed a tolerable profile and promising antitumor activity, as ORR was 20% among 20 patients with advanced PC.
Ongoing trials investigating the use of PARPis alone or combined with different agents for the treatment of advanced PC patients are summarized in Table 1. These agents have demonstrated a synergistic effect with programmed death-1/programmed death-ligand 1 (PD-1/PD-L1) inhibitors in murine models, possibly due to PD-L1 upregulation in the tumor microenvironment [25][26]. Moreover, the addition of a MEK inhibitor to a PARPi and a PD-(L)1 inhibitor is currently under evaluation to overcome RAS-mediated resistance to PARPis in RAS-mutant PC, which was reported in preclinical models [27].

PARPis represent only a small part of the wide scenario of DDR gene inhibition. The interest in DDR genes has risen in recent years as an increasing number of specific agents targeting these pathways is in the testing or development phase. The ataxia-telangiectasia mutated (ATM) gene plays a central role in DNA damage response and DSB repair, and its germline mutation is known to produce a specific syndrome, as well as increasing the risk of developing several types of cancer, including PC [28]. Once the ATM signal is disrupted, the cell relies on downstream ATR and CHK1/2 pathways to ensure DNA repair, arresting the cell cycle and preventing the DNA fork from collapsing. These functions make them two possible targets in ATM-deficient tumors, which account for 9–18% of sporadic PC [29][30]. Consistently, a sensitization of ATM-mutated PC cell lines to PARP, ATR, and CHK1/2 inhibitors, alone or in combination with other agents, have been demonstrated in preclinical studies [31][32][33]. Considering these data, several ongoing clinical trials are evaluating the potential of ATM, ATR, and CHK1 inhibitors in patients with PDAC (Table 1).
WEE1 regulates the G2 DNA damage checkpoint in concert with CHK1 during cell replication, which delays the completion of mitosis of cells that suffer genomic damage, thus, increasing cell viability [34]. These functions provide the rationale of blocking WEE1 to increase the efficacy of DNA damaging agents and to enhance synthetic lethality. MK-1775 (also known as AZD1775 and adavosertib), a WEE1 inhibitor, has been tested in combination with several DNA damaging agents in preclinical studies, such as gemcitabine, mitomycin C, and platinum derivatives [35][36]. A phase I trial enrolling 176 patients with refractory solid tumors evaluated adavosertib in combination with chemotherapy (either carboplatin, cisplatin, or gemcitabine) and documenting a 10% ORR. The response rate was significantly higher (21%) in the subpopulation of TP53-deficient patients as these tumors strongly depend on WEE1 activation to arrest the cell cycle in response to DNA damage [37][38]. Recently, a dose-escalation trial enrolling treatment-naïve, locally advanced PC patients documented a median OS of 21.7 months (90% CI, 16.7 to 24.8 months), and a median PFS of 9.4 months (90% CI, 8.0 to 9.9 months) with a combination of adavosertib, gemcitabine, and radiation therapy (RT) [39]. A phase I/II trial evaluating the addition of adavosertib to chemotherapy in metastatic PC is ongoing (Table 1).