The carbazole class is made up of heterocyclically structured compounds first isolated from coal tar. Their structural motif is preponderant in different synthetic materials and naturally occurring alkaloids extracted from the taxonomically related higher plants of the genus Murraya, Glycosmis, and Clausena from the Rutaceae family. Concerning the biological activity of these compounds, many research groups have assessed their antiproliferative action of carbazoles on different types of tumoral cells, such as breast, cervical, ovarian, hepatic, oral cavity, and small-cell lung cancer, and underlined their potential effects against psoriasis.

The pharmaceutical and pharmacological importance of these compounds resides in their ability to participate in hydrogen bonding with biological substrates (like specific proteins), where the heterocycle core can embody either H-acceptor as in heteroaromatic molecules or H-donor as in saturatedN-heterocycles. This peculiarity is involved not just in pharmacological properties, but also in the pharmacokinetic behaviour of such drugs [1]. Among the various classes of heterocyclically structured compounds emerges the carbazole class (Figure 1), first isolated by Graebe and Glazer in 1872 from coal tar [2]. Since that moment, these compounds represented a great concern due to the attractive structural characteristics and encouraging biological effects displayed by several carbazole alkaloids [3][4][5].

Figure 1. Structure of carbazole (1) and murrayanine (2).

Indeed, their structural motif is predominant in different artificial materials and naturally occurring alkaloids [5][6]. A number of carbazoles derived from plants possess antitumor, psychotropic, anti-inflammatory, antihistaminic, antibiotic, and antioxidant activities [7]. In fact, due to their properties, they are also employed in the materials science field, as optoelectronic materials, conducting polymers, and synthetic dyes [8][9]. For instance, polyvinylcarbazoles (PVK) [10] have been thoroughly investigated for their employments in photorefractive materials and xerography.

Many natural carbazoles and their synthetic derivatives contain different substituents on the carbazole ring such as carbazomycin B (4) and carbazomadurin A (5), while others present a quadricyclic or pentacyclic structure, such as ellipticine (6) and staurosporine (7) respectively, or can appear as dimers, for example clausenamine A (8) (Figure 2) [11]. 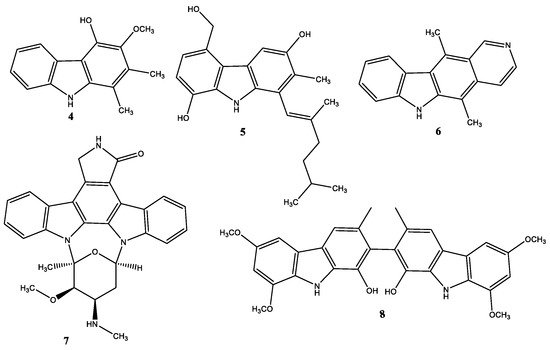 Due to the growing interest in carbazole bioactivities, different synthetic strategies have been set up and reported in the literature [12][13][14]. [12] thoroughly reviewed the preparation methods of these carbazole alkaloids. Usually, the synthetic routes to carbazoles include nitrene insertion, Fischer indolization, Pummerer cyclization, Diels-Alder reaction, dehydrogenative cyclization of diarylamines, etc. However, more recently, researchers explored the possibility of using transition metal-mediated C-C and C-N bond formation, cyclotrimerization, benzannulation, Suzuki–Miyaura coupling, and ring-closing metathesis [15][16][17].

Several studies aimed to compare the structural characteristics of natural carbazole alkaloids. They underlined that 3-methylcarbazole (9,Figure 3) could be the essential intermediate in their biosynthesis in higher plants. By contrast, 2-methylcarbazole (Figure 3) could be the communal biogenetic precursor to the tricyclic carbazoles isolated from lower plants. Nevertheless, the natural precursor of the carbazole nucleus has not yet been identified.

Concerning their biological activity, many research groups assessed the antiproliferative action of carbazoles against different types of tumor cells such as breast, cervical, ovarian, hepatic, oral cavity, and small-cell lung cancer [18][19][20][21]. One of the principal mechanisms possibly involved in this effect is the ability of carbazoles to target the signal transducers and activators of transcription (STATs) family of signaling pathways (especially STAT3). Indeed, this class of proteins is fundamental for the growth and survival of different human tumor cells [22][23]. In this context, the review aims to examine the studies carried out over the years to develop carbazolic compounds able to act on this target.

Signal transducers and activators of transcription (STATs) constitute a group of cytoplasmic proteins that function as signal messengers and transcription factors engaged in critical cellular events with the use of multiple cytokines and growth factors. Since tyrosine has been phosphorylated, two STAT monomers develop dimers via mutual phosphotyrosine-SH2 interactions, migrate to the nucleus, and bind to STAT-specific DNA-response elements of target genes that cause gene transcription.

Concerning the gain- or loss-of-functions mutation in genes encoding for JAK-STAs, immunodeficiency and susceptibility to infections are the most widespread phenotypes, demonstrating the crucial role of Jak–STAT signaling in the development and function of immune cells. Indeed, it is involved in poxviruses, which encode interferon-receptor homologs; vaccinia viruses, which encode phosphatases; and Epstein–Barr viruses, encoding a protein that subverts multiple components of the interferon–STAT1 [26]. Moreover, STAT1 signaling governs T helper type 1 (TH1) cell-specific cytokine production that changes both immune functions and inflammatory responses by modifying the ratio between TH1 and TH2 cells. Besides, many studies corroborate the relationship between STAT1 downstream of interferons and NF-κB downstream of Toll-like receptors or the cytokine TNF, the two pathways can promote or ‘prime’ each other [26][27].

Previous works demonstrated that in vitro cultured STAT3-deficient T cells did not react to IL-6 stimulation and could not be saved by IL-6 from apoptosis, demonstrating that STAT3’s role is crucial for IL-6-mediated anti-apoptotic responses. Further, STAT3 altered functions in keratinocyte physiology could induce skin carcinogenesis. Moreover, constitutively active STAT3 has been identified in several malignancies, among which are breast, melanoma, prostate, head, and neck squamous cell carcinoma (HNSCC), multiple myeloma, pancreatic, ovarian, and brain tumors [28][29][30][31][32].

Constitutive STAT5 triggering is also involved in the development of HNSCC, chronic myelogenous leukemia (CML) Indeed, it is extensively accepted that STAT5 and STAT3 have in common equal functions in promoting cancer, inducing the expression of pro-proliferative and anti-apoptotic genes [36][37]. In addition, STAT5A and B are implicated in chronic myeloid leukemia. In fact, the transfection of K-562 leukemia cells either with anti-STAT5A or anti-STAT5B, led to a greatly increased apoptosis rate [38].

IL-4 and IL-13 trigger STAT6 signaling that sustains immune function and regulates the equilibrium between inflammatory and allergic immune responses [39][40]. A recent study assessed that E2F1 is essential for maintaining the level of signal transducer and activator of STAT6 in HCT116 colorectal cancer cells. Mechanistically, E2F1 induced specificity protein 3 (SP3) directly binds to the promoter of the STAT6 gene and activates its transcription in CRC cells. As a result, it was demonstrated that the E2F1/SP3/STAT6 axis is required for the IL-4-induced epithelial-mesenchymal transition of colorectal cancer cells [41].

Linked to STAT proteins are Janus kinases (JAK1, JAK2, JAK3, and TYK2) enzymes, structurally related to each other, with tyrosine kinase activity assisting in the passage of signals from the cell surface to the inside. Indeed, in psoriasis, diverse cytokines implicate the JAK-STAT pathway, such as type I and II IFN, IL-12, IL-22, IL-23, and IL-13. In particular, JAK activation starts, at first, upon ligand-mediated receptor multimerization because two JAKs are brought into proximity, allowing trans-phosphorylation. JAK1 displays its function by conveying the signals of numerous proinflammatory cytokines and cooperates with JAK3 in lymphopoiesis by binding to heterodimeric interleukin (IL) receptors.