The Himalayas, especially the Everest region, are highly sensitive to climate change. Although there are research works on this region related to cryospheric work, the ecological understandings of the alpine zone and climate impacts are limited. This study aimed to assess the changes in surface water including glacier lake and streamflow and the spatial and temporal changes in alpine vegetation and examine their relationships with climatic factors (temperature and precipitation) during 1995–2019 in the Everest region and the Dudh Koshi river basin. In this study, Landsat time-series data, European Commission’s Joint Research Center (JRC) surface water data, ECMWF Reanalysis 5th Generation (ERA5) reanalysis temperature data, and meteorological station data were used. It was found that the glacial lake area and volume are expanding at the rates of 0.0676 and 0.0198 km3/year, respectively; the average annual streamflow is decreasing at the rate of 2.73 m3/s/year. Similarly, the alpine vegetation greening as indicated by normalized difference vegetation index (NDVI) is increasing at the rate of 0.00352 units/year. On the other hand, the annual mean temperature shows an increasing trend of 0.0329 °C/year, and the annual precipitation also shows a significant negative monotonic trend. It was also found that annual NDVI is significantly correlated with annual temperature. Likewise, the glacial lake area expansion is strongly correlated with annual minimum temperature and annual precipitation. Overall, we found a significant alteration in the alpine ecosystem of the Everest region that could impact on the water–energy–food nexus of the Dudh Koshi river basin.

The results of the modified Mann–Kendall test for annual and seasonal temperature data for 1995–2019 are presented in Table 1. A positive z-value (Table 1) and slope value (Figure 1 and Table 2) indicate an increasing trend, whereas a negative z-value and slope value indicate a decreasing trend. The Kendall’s tau value explains the strength of correlation between variables, ranging from −1 to +1. Annual and seasonal temperature trends based on the linear regression method are shown in Figure 1 and Table 2. Significances are provided at 90%, 95%, and 99% confidence levels. 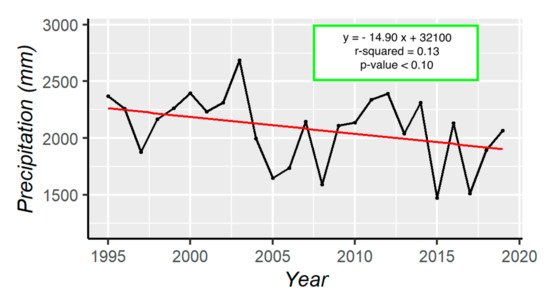 The results of the modified Mann–Kendall test for annual and seasonal data are shown in Table 4. It is observed that the annual surface water extent in the Everest region shows a positive monotonic trend at a 95% confidence level.
The seasonal and annual surface water extent trends based on the linear regression test are shown in Table 2 and Figure 3a. We found that the surface area of glacial lakes is increasing at the rate of 0.068 km2/year. The significant increasing trend is shown at a 99% confidence level. Based on the season, winter and autumn seasons show an increasing rate of 0.078 and 0.15 km2/year, respectively (Table 2). The average surface area of glacier lakes in the study area is 4.9 km2. Thus, this observed increasing rate is quite significant. In Figure 3b, the glacial lake volume also shows a significant increasing trend with a rate of 0.0198 km3/year. The average glacial lake volume is 1.01 km3.

Figure 3. Glacial lake: (a) change in surface area; (b) changes in lake volume.

Alpine vegetation represents life at climate limits and is a quick indicator of climate change. Based on GIS analysis, around 97.5% of the study area is a high-altitude region having an elevation of more than 3000 m. Thus, alpine vegetation in the Everest region mostly possesses alpine grasses, juniper shrubs, and conifer forests. Figure 5 shows the vegetation maps in 1995 and 2020. It is observed that the dense vegetation increased from 103.5 to 150 km2 (45% increase), while light vegetation shows minor changes, increasing from 300.2 to 303.4 km2. This result shows the most marked expansion in dense vegetation in the Everest region. On the other hand, despite the constant areal extent, light vegetation such as alpine meadows/rangeland and juniper scrubs also shows expansion towards upper altitude, as shown in Figure 5. 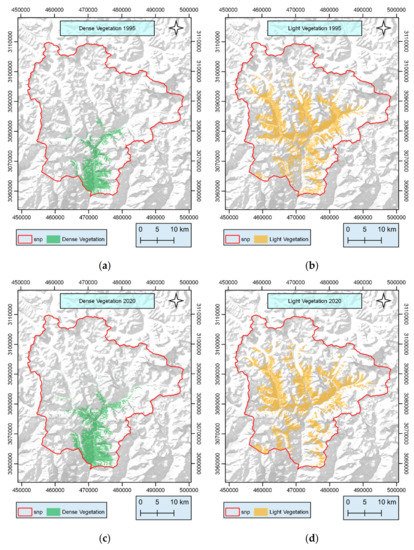 The result of the modified Mann–Kendall test for NDVI is shown in Table 4. It is revealed that there is a significant increasing trend in annual NDVI at a 95% confidence level. Similarly, all seasonal NDVI trends are also increasing significantly at a 95% confidence level.
Figure 6 and Table 2 show the linear regression trend of annual and seasonal NDVI during 1995–2019. It is noted that the NDVI is increasing at a rate of 0.0035 units/year. Seasonally, the autumn NDVI shows the highest increasing rate of 0.0051 units/year. More importantly, the spring growing season also shows a significant increasing trend. An abrupt rise in annual NDVI was observed in 2008. This also indicates the greening trend is increasing in the Everest region. 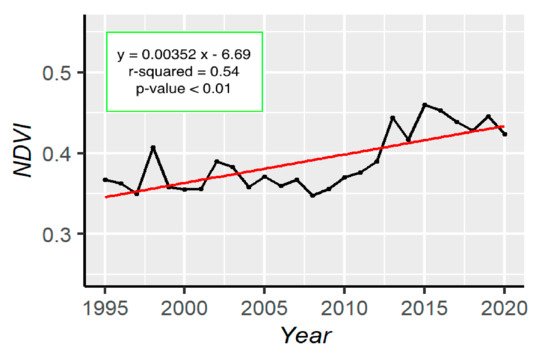 2.4. Alpine Region Change and Its Relationship with Climate Variables

Temperature, precipitation, and solar radiation are the major climate controls that act as limiting factors for vegetation growth [28]. Some studies found that temperature is responsible for 31–33% of Earth’s vegetation growth; precipitation is responsible for 40–52% of vegetation growth; solar radiation is responsible for 5–27% of vegetation growth [28][29]. In this study, it is revealed that the annual mean, maximum, and minimum temperatures at the Everest region are increasing at the rates of 0.0329, 0.0415, and 0.055 °C/year, respectively. In line with this result, Shrestha et al. [13] also found that the maximum temperature is increasing rate at 0.057 °C/year in the entire Nepal Himalayas. Within seasonal temperature, winter maximum temperature and winter minimum temperature show higher warming trends than the summer season. On the global scale, it is observed that winter warming is faster than summer warming [30]. Winter warming is ecologically more crucial. Winter warming can promote vegetation growth by reducing the seasonal frost of the winter season [31]. An experiment has discovered that soil respiration is increased by 9.3% by winter warming [32]. Winter warming stimulates litter decomposition in the winter season. Most importantly, prolonged winter warming triggers advancement in spring plant phenology and eventually increases the length of the growing season [33]. On the other hand, the annual precipitation of the Everest region shows a decreasing monotonic trend. However, the magnitude of change is found at −14.90 mm/year at a 90% confidence level. Besides this, summer precipitation also shows a decreasing trend at a 90% confidence level. Salerno et al. [34] also observed that the monsoon precipitation was weakening (−9.3 mm/year) in the Everest region during 1994–2013. Another larger-scale study including the Everest region by Shrestha et al. [35] found an increasing annual precipitation over the entire Koshi river basin (area of 87,970 km2) from 1975 to 2010. However, this study did not include the stations in the study area, and the results in this study might be due to local spatial variation. Hence, the climate condition of the Everest region has changed over the recent 25 years period. This climate change is very likely to alter the alpine ecosystem and cryospheric processes of the Everest region.

It is estimated that the glaciers are decreasing an average of 267 Gt/year at the global scale and 6 Gt/year in South Asia [36]. As a result, glacial lakes are growing. In the Everest region, the result shows the increasing trend of glacial lake surface area at 0.0676 km2/year. The glacial lake volume has been increasing at the rate of 0.0198 km3/year. Bajracharya et al. [37] also found that the moraine-dammed lakes’ area, that is lakes formed due to blockade glacier debris, in the Dudh Koshi river basin increased from 2.291 to 7.254 km2 between 1996 and 2000. Similarly, Salerno et al. [38] found that the number and area of glacier lakes in the Everest region especially in the designated area of Sagarmatha National Park have increased. They reported 624 glacial lakes with an area of 7.43 km2 in 2008. The reason behind the glacial lake changes might be linked to temperature and precipitation change. A study of the Tibetan Plateau also found that the glacial lake expansion is highly correlated with glacier area recession, and this variation is associated with temperature rising [39]. The Everest region is also facing significant temperature rising, especially winter warming. Moreover, the glacial lake expansion may foster positive and negative impacts. There are unique glacier ecosystem services such as irrigation and drinking water supply to the downstream population and lowland discharge. However, most glacial lakes are formed by blockade of ice, glacier debris, landslide, and are inherently unstable type and susceptible to glacial lake outburst floods. Future endeavors should therefore be given to the study of glacial lake water resource utilization and their risk management.
Similarly, the average annual streamflow of the Dudh Koshi river basin is 199 m3/s. Dudh Koshi is a tributary of the Koshi River. The average flow of the Koshi River is 1658 m3/s. Similarly, the average flow of the three other major river basins of Nepal, namely, Gandaki, Karnali, and Mahakali, are 1753, 1441, and 698 m3/s, respectively [40]. In this study, from 1995 to 2019, we observed that the average annual streamflow is decreasing at the rate of 2.73 m3/s/year. These decreasing flow trends are consistent with weaker precipitation in the Everest region. Besides, the temperature is increasing, which might trigger more precipitation in the Everest region, but this is not the case. Gautam and Acharya [41] found a decreasing trend in the streamflow of the Dudh Koshi River basin from 1967 to 1997. Hence, the streamflow of the Dudh Koshi River is declining, which causes a water availability risk to the river-dependent ecosystems and societies. In addition to the need to closely monitor glacial lakes as mentioned above, it is also urgent and essential to evaluate the potential water stress associated with decreasing precipitation in this river basin.

In this study, we found that NDVI is increasing at a rate of 0.00352 units annually. All the seasonal NDVIs are increasing with the highest in the autumn season. We also observed that annual NDVI is associated with autumn warming. Shi et al. found that autumn warning delays the end of the plant growing season for deciduous forests [42]. However, the study area consists of mostly evergreen conifer forests and perennial shrubs. Autumn warming also promotes vegetation growth by reducing frost damages [43]. The prominent increase in autumn NDVI reflects the increase in the extent of perennial vegetation. Additionally, the significant winter warming in the Everest region also favors vegetation growth. It is assessed that the dense vegetation cover has increased from 103.5 to 150 km2. Consistent with this, Baniya et al. [17] also observed a greening trend in all of Nepal with significant NDVI trends at 0.0005 and 0.002 units/year in the spring and autumn season, respectively. The driving factors for these increasing trends are attributed to temperature (39.62%), ecological restoration (25.16%), and multiple factors (35.22%). Over the larger scale in the Koshi river basin, Wu et al. [18] found a greening trend of 0.0023 units/year from 2000 to 2018. Zhang et al. [15] also showed the increasing rate of average growing season NDVI over the Koshi River basin at the rate of 0.0034 units/year from 2000 to 2011. In the context of greening in the Everest region, there might be multiple casual/control factors. The greening trend is increasing despite weaker precipitation. The ecological restoration program was also held in the study area. However, the area of the plantation during 1979–2008 is small (1.51 km2) as compared to the increasing area [9]. Ecological restoration in the Everest region is also challenging because of less water, cold weather, and rocky topography. Besides, the Everest region had around 1.02 km2 settlement area and 8.50 km2 agriculture area in 2011, and this region is managed under park regulations. Hence, the human disturbances to land-use change are considered minimal [44]. The shrub promotion due to overgrazing and abandonment of remote farmland is likely to favor vegetation expansion. Hence, it is obvious that the vegetation expansion is also driven by climatic factors. In this study, we found that annual NDVI is highly correlated with annual temperature. The abrupt rise of annual NDVI during 2008–2015 coincided with an increasing trendline in annual mean temperature during 2003–2009. Moreover, the annual precipitation showed an increasing trendline during 2008–2012 despite weak precipitation over the period. Furthermore, the temperature change can drive an upper shift in snow line altitude, which subsequently favors temperature for vegetation expansion and migration [45]. It is also revealed that temperature triggered alpine vegetation greening on the Tibetan Plateau from 1982 to 2011 [46]. For future endeavors, long-term research on phenological changes and carbon dynamics of the alpine vegetation may explore more about the climate change impacts on the high-altitude region.