Polypeptoids have low cytotoxicity and good biocompatibility because of their structural similarity to polypeptides. Different from polypeptides, however, polypeptoids show thermal transformation similar to synthetic thermoplastics, making them suitable for various heat treatment methods. Polypeptoids combine the properties of natural macromolecules and synthetic polymers, and become great candidates as stimulus-responsive biopolymers.

Responsive polymer materials can respond to changes in the external environment [1], such as heat [2], pH [3], ions, electric field [4], magnetic field [5] and ultraviolet/visible light [6], resulting in the change of their physical and chemical properties. Stimulus-responsive polymers are usually able to produce conformational changes induced by the changing environment to generate reversible microphase separation or self-assembly. The research focuses on designing materials with good biocompatibility, low cytotoxicity and response to specific biological stimuli.

Polysarcosine is the polypeptoid with great water solubility, making it an outstandingly interesting candidate for the synthesis of amphiphilic block copolymers. Later, Ronald N. Zuckermann introduced the term polypeptoids for 30–36 residue long peptoids, thus establishing the commonly accepted terminology. In recent years, with the improvement of synthesis methods [7], polypeptoids have attracted more and more scientists for their great biocompatibility and other excellent properties. Many researchers have focused on applying polypeptoid structures in the biostimulation response.

Polypeptoids have low cytotoxicity and good biocompatibility because of their structural similarity to polypeptides (Figure 1) [8][9][10][11][12][13]. Different from polypeptides, however, polypeptoids show thermal transformation similar to synthetic thermoplastics, making them suitable for various heat treatment methods [14]. Polypeptoids combine the properties of natural macromolecules and synthetic polymers, and become great candidates as stimulus-responsive biopolymers. Polypeptoids can achieve their responsiveness to environmental stimuli by linking different functional groups to backbone nitrogen atoms as side chains [15][16]. 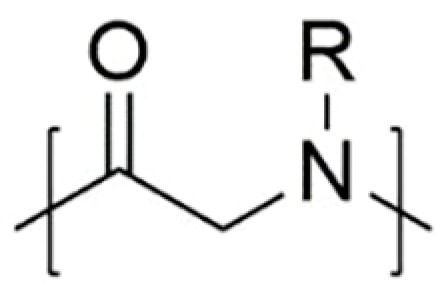 Figure 1. Schematic diagram of the chemical structure of polypeptoid.

With specific external stimulation, the macromolecular morphology and conformation of the polymers change accordingly, leading to the change of the physical and chemical properties of the polymers.

The unique property of pH-responsive polymers is that the adjustment of pH value can easily cause the change of interactions between ions and hydrogen bonds, resulting in reversible microphase separation or self-organization [3]. The groups containing weak acids and bases, such as carboxylic acid, phosphoric acid and amine, will change in ionized state according to different pH values. It is because that more and more COO−groups become protonated with the decrease of pH value, making the solubility of the polymer reduce and the solution become turbid [22]. PH-responsive polymers can be used for pH triggered drug release and biosensor [23].

Till now, temperature and pH response are the two most widely studied response modes of stimulus-responsive polymers. However, due to the unique advantage that light can be controlled in time and space, the photo response system is also desirable [24][25][26]. Some specific structures can exhibit a light viscosity effect under ultraviolet irradiation, resulting in conformational contraction. Photo-responsive polymers usually need to introduce corresponding functional side chains, such as diarylethene, o-nitrobenzyl and azobenzene [27][28][29][30][31].

Recently, some researchers have developed dual response polymers by combining temperature response with pH response [32]. The temperature response can also be combined with the photo response [33][34]. These kinds of materials have a bright application prospect in the biocatalysis [35], drug carrier [36], coatings for protein adsorption [37], signal control of sensors and micro engines [38].

In ring-opening polymerization, primary amine and N-Heterocyclic Carbene can be used to initiate cyclic N-substituted N-carboxylic anhydride (NCA) monomers to obtain polypeptoids with longer molecular chains [39][40]. Studies have shown that polypeptoids can also be prepared from N-substituted glycine N-thiocarboxylic anhydride (NTA) monomers with primary amine as the initiator [41]. To achieve stimulus-responsive properties, multi-component reactions among isocyanates, aldehydes, acids and amines were introduced [42]. The responsive polypeptoids have different structures and compositions, including homopolymer, random copolymer, block copolymer and graft copolymer.

The reason is the entropy loss of cyclic polymer solution during phase transition is lower than that of linear polymer solution, resulting in the decrease of Tcp[43]. then prepared corresponding polypeptoid bottle brush copolymers with different main chain length and side-chain composition by ring-opening metathesis polymerization (ROMP). The bottlebrush polymer is a kind of molecular structure with a linear polymer main chain and dense polymer side chains. The results suggested that thermal annealing and salt addition can change the interactions between polymer and solvent, and are helpful for polymer conformational recombination to produce expanded to shrinked coil change.

glycine)32-ran-(N-butyl glycine17)]P(NEG32-r-NBG17) and grafted it onto silicon substrate by thiol-ene click reaction (Figure 2a). The coating can intelligently adjust the propensity of the layer to adsorb or repel proteins or other biological macromolecules [44][45]. With the increase of temperature, the size of P(NEG32-r-NBG17) nanostructures decreases, forming a collapsed pattern. Surface modified with temperature-responsive polymer, whose characteristics change with temperature, can be widely used in surface-based sensor technology [46]. 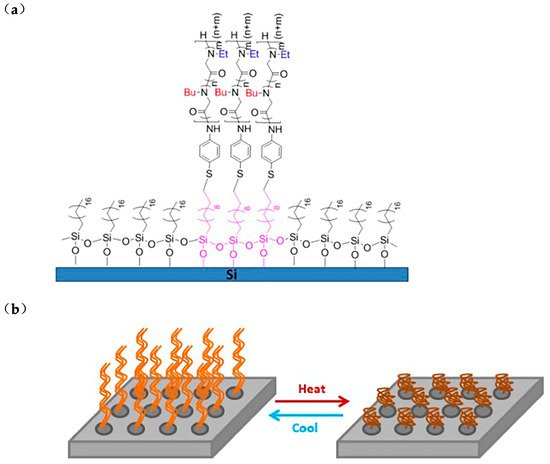 Molecular weight and composition of block copolymers will affect the size and shape of aggregates in solution induced by temperature change. block copolypeptoids with different block ratios. After annealing and crystallization, micelles transformed into fibre intermediates and further packed into larger complex three-dimensional structures with different shapes, such as flower (P70M23), oval (P70M42and P70M76) and irregular shapes When the temperature is further raised to the Tcl, the formed aggregates recombine and break into smaller micelles, resulting in clear solution.

Polypeptoids can achieve temperature response by containing both hydrophilic and hydrophobic polypeptoid fragments, or having specific alkyl side chains that directly have a thermal response in aqueous solution. In low concentration (2.5–10 wt %) of water and biological medium, the copolymer can undergo sol-gel transition. This hydrogel can be injected through the No. 24 injection needle. Synthesis of thermoreversible hydrogel formed at human physiological temperature is very attractive for their potential applications in biological and medicine fields [47].

The carbon-carbon triple bonds make poly (N- propargyl glycine) to be easily modified by thiol light addition, copper-catalyzed azide cycloaddition, ethylene oxide nucleophilic addition and heat-induced cross-linking. Poly (N-propargylglycine), as a modular platform, can be utilized to achieve grafted polypeptoid or ionic polypeptoid materials with specific responsiveness (Figure 3) [48]. Compared with polyglutamate, pegylated polypeptoids have better thermal processing properties because there is no chiral center or hydrogen bond interactions in the main chain. The synthesis of pegylated polypeptoids by photoaddition of mercaptan and alkyne has the disadvantages of inaccurate modification site and low efficiency. 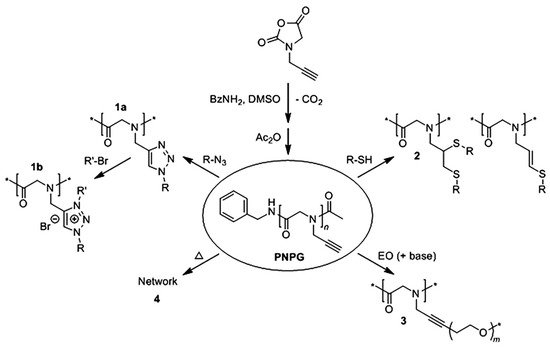 Figure 3. Synthesis of poly(N-propargyl glycine) and subsequent modifications of alkyne side chains. Reprinted with permission from [48]. Copyright 2015, Elsevier.

responses can show the conversion of different folding states in different pH The sequence-controlled pH-responsive peptoid oligomers can be prepared using a solid-phase submonomer synthesis method by repeating bromoacylation and displacement steps [49][50]. Varying functional groups, such as carboxylic acid, phosphoric acid, amine, etc., can be introduced by primary amine submonomers in displacement steps. The carboxylic acid in the side chain of carboxyl phenylethyl is an ionizable group, and the secondary folding structure containing the ionizing group can show pH sensitivity.

Li et al. introduced amino groups into peptoid side chains through ring-opening polymerization and click chemistry. The results showed that the polymer was always soluble in water at pH ≤ 12.9. The Tcpof polymer decreased from 54 °C to 22 °C when pH increased from 13.2 to 13.6. Such polymers have both pH and thermal response properties and can be used in specific biomedical scenarios [22].

Photo-responsive polypeptoid is a kind of polymer that can produce corresponding physical or chemical changes under the irradiation of light (such as ultraviolet, infrared, visible light, etc.). The results showed that the polymer has cis confirmation due to p–p * transition under 325 nm light and has the characteristics of trans azobenzene due to prepared diblock polypeptoids containing azobenzene side chains by ring-opening polymerization. The photoinduced anisotropy of azobenzoylated polypeptoids has essential application prospects in optical information storage, optically controlled molecular orientation, molecular switch and integrated optics.

Under the irradiation of ultraviolet light, o-nitrobenzyl group was photolyzed to produce a free mercaptan group, which spontaneously oxidized to form disulfide bond. The cross-linking of the disulfide bond formed by photooxidation can keep the nanostructure stable. Simultaneously, in the presence of reducing agent glutathione (GSH), the spontaneous oxidation of the thiol groups to disulfide bonds under ultraviolet irradiation was reversible, which made the cross-linking process reversible, as shown in Figure 4[52]. The nitrobenzyl-modified polypeptoids have great potential applications as photo-controlled drug delivery materials, functional gels and photoelectric sensors [53].

Compared with normal cells, there are higher concentrations of reactive oxygen species in tumor and inflamed tissues [54][55][56]. Ling et al. synthesized redox responsive diblock copolymers containing hydrophilic segment polysarcosine (Psar) and hydrophobic segment poly (N-3- (methylthio) alanine) (PMeSPG). The hydrophobic thioether side chain of PMeSPG can be transformed into a hydrophilic sulfoxide side chain in the presence of reactive oxygen, as shown in Figure 5[57]. Redox-responsive polypeptoid has broad application prospects in the related fields of cancer chemotherapy drug delivery.