Flavor is one of the most important factors in attracting consumers and maximizing food quality, and the Maillard reaction (MR) is highly-involved in flavor formation. However, Maillard reaction products have a big drawback in their relatively low stability in thermal treatment and storage. Amadori rearrangement products (ARPs), MR intermediates, can alternatively act as potential flavor additives for their better stability and fresh flavor formation ability.

The Maillard reaction has been one of the most important reactions in flavor generation since its first discovery by French chemist Louis-Camille Maillard in 1912 [1]. The sophisticated reaction cascades start with the formation of a Schiff base (glycosylamine) from the condensation reaction between the carbonyl groups of reducing sugars and amino groups of amino acids, peptides or proteins. The Schiff base then goes through Amadori rearrangement with a nucleophilic catalyst and forms a more stable 1-amino-1-deoxy-2-ketose, called Amadori rearrangement products (ARPs) [2]. While ARPs are specific for a Schiff base derived from aldose sugar, Heyns rearrangement products (HRPs, 2-amino-2-deoxyaldose) are derived from ketose sugar [3]. The successive breakdown of ARPs or HRPs generates abundant volatile carbocyclic and heterocyclic compounds, oligomers and polymers, thus bring various flavor and yellowish to brown colors to food products [4].

The Maillard reaction is commonly seen in thermally processed food with attractive and complex flavors, such as bread, cereal, coffee, roasted meat. These flavors mainly come from the formation of pyrazines, pyrroles, alkylpyridines, acylpyridines, furanones, furans, oxazoles, and thiophenes [5]. Each gives a unique flavor of cooked food. However, these Maillard reaction-derived flavors are of unsatisfactory stability. Food products likely go through high temperature processing like boiling, baking, frying or pasteurization and then a specific shelf life range from a few days to years before consumption. The loss of attractive flavor compounds such as acetaldehyde, furfural and butanal, has been a major concern regarding flavor quality and consumer acceptance [6]. Enormous efforts have been reported to stabilize flavor compounds, and among which nanoencapsulation is considered an efficient method [7]. Not until recently, have people started to pay attention to flavorless intermediates, ARPs. A big advantage of ARPs is better stability during storage and synchronous production of fresh and desirable flavors during thermal treatment, which makes them potential flavor enhancers and food additives. However, to our best knowledge, there is no comprehensive review on ARPs as potential food additives. Therefore, this review aims to, for the first time, elucidate aspects related to ARPs and discuss the possibility of being food additives.

Starting from the 1950 s, ARPs have drawn attention, and an array of studies have focused on analyzing ARPs in foods since then. ARPs were first found in browned freeze-dried apricots using ion-exchange chromatography in 1958 [8]. Though the resulting spectrum is highly complicated, it proved the existence of ARPs. After that, purified glycine-, alanine- and valine-glucose-ARPs were present in beer malt and were also found in soy sauce together with isoleucine- and leucine-glucose-ARPs [9]. As shown in Table 1, seven amino acid-glucose ARPs were detected in cocoa, coffee, barley malt, wheat malt, wheat beer, bell pepper and tomato, of which tyrosine and histidine ARPs were found present for the first time in foods [10]. The drying of food accelerated ARP formation, and formed ARPs also degraded during roasting in coffee and cocoa. The highest ARP concentration is valine-glucose in unroasted cocoa and dried bell pepper at 342 and 3460 mg/kg, respectively. The results have been correlated with other studies and shown in Table 1 [11]. Eight ARPs existed in dried fruit and vegetables, milk powder, tomato juice and paste, and red peppers, and the total ranges from 1.36 to 3415 mg/100 g. The drying of tomato juice facilitated ARP formation, which was further increased under vacuum. Though amino acid-APRs are identified from foods, peptides like oligopeptides should also be a focus for their abundance in foods. Unfortunately, only a few studies paid attention and succeeded in detecting peptide-ARPs, such as carnosine-glucose-ARP from meat broth. Therefore, more attention should be paid to oligopeptide-ARP analysis in future studies to fill the gap.

Stability is the most important factor affecting flavor quality, the decisive aspect of consumer acceptance. Flavor stability is affected by chemical reactivity itself, environmental factors such as light and oxygen, and influences from the food matrix, such as fat, metal ions, and radicals [12].

Maillard reaction products (MRPs) such as pyrrole and furan have been traditional key flavor compounds and food additives for decades [13]. However, one big defect of MRPs is their weak stability during storage and processing, especially the ones involved in thermal treatment. Pyranone, common in glucose- or lactose-rich food, and 3,4-dihydroxy-3-hexen-2,5-dione, a caramel odor, is significantly prone to degradation during short-term storage [14]. Furaneols, also known as strawberry furanone, are heat-labile and rapidly degrade preferably at low pH [15]. In contrast, studies have reported ARPs that were more stable during storage. Phenylalanine-xylose-ARP only reduced 6.49% after 2 months storage at room temperature while MRPs reduced more or less resulting in dramatic changes in flavor profile [16]. A consistent result is also reported for glutamic acid-glucose-ARP. In contrast to N-glycoside form rapidly degraded with acid catalyst, 13C NMR monitoring showed that glutamic acid-glucose-ARP in an aqueous solution maintained good stability for 3 days storage at pH 5 and room temperature, let alone with moderate or basic pH [17]. The opposite result for pH is shown in carnosine-glucose-ARP whose degradation rate increases with pH value increase [18]. This phenomenon depends on the amino acids/peptides’ chemical properties. Glutamic acid is acidic in aqueous solution while carnosine exists in basic form, thus are correspondingly more stable in acid and base conditions, respectively. Glycine, as the simplest amino acid, triggered more attention on its ARP investigation and model studies. As shown in Figure 1, the degradation pathways of glycine-glucose ARP in the aqueous system can be a reference for other ARP degradation studies [19]. 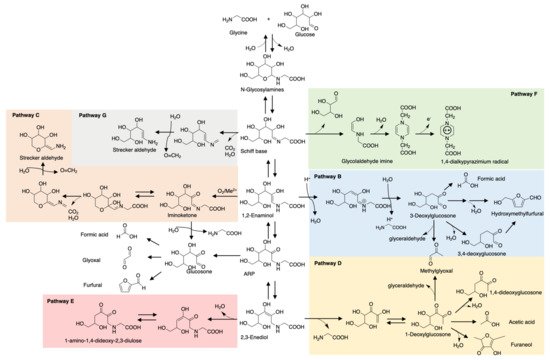 Besides the abovementioned associations with intrinsic chemical nature and pH value, the stability of ARPs is also related to temperature, water activity, and the presence of a catalyst or stabilizer. Temperature plays a leading role in ARP stability. It shows a positive correlation with ARP degradation rate as more energy providence brings in higher reactivity and instability, so is the water activity [18]. The formation and decomposition kinetics of ARPs in freeze-dried carrots were studied and found that the lower the water activity, the higher Ea of formation while the higher water content, the higher Ea of decomposition. Hence, dilute solutions of ARPs are more sensitive to changes in temperature than concentrated solutions [20]. A supporting study showed that methionine-glucose-ARP had accelerated the degradation rate under high temperature and elevated formation of 3-DG, 1-DG, glucosone, and other dicarbonyls such as glyoxal and methylglyoxal [21]. Similarly, tryptophan-glucose-ARP showed a several times faster decomposition rate under high temperature and/or high water activity [22]. However, these studies mainly focused on high temperatures over 100 °C in order to imitate the flavor generation process, seldom investigation explores the stability of ARPs under storage conditions systematically.

Based on previous studies, adding ARPs as seasoning is a promising way to prolong shelf life for low water reactivity and storage under low or room temperature. However, extensive use of ARPs in different food matrices is an ultimate goal as good flavor additives. In addition to the neutral aqueous system, various food systems should be considered, for instance, the acidic fluid environment present in juice and soft drinks, base fluids such as sparkling spring water or meat broth, emulsion systems such as milk and meat broth, solid systems such as bread, cookies, and chips, and frozen instant products such as pizza and meat products. However, few studies reported the stability of ARPs in such models, which should be a priority before heat treatment and need further research in addition to intrinsic flavor generation ability.

Many studies suggested that the ARPs of amino acids or peptides are correlated with umami or kokumi enhancing properties as shown in Figure 2. As glutamic acid and glucose are strongly correlated with umami taste, glutamic acid-glucose-ARP unsurprisingly showed a prominent umami-like taste at a low threshold of 1–2 mmol/L, close enough to that of monosodium glutamate (MSG) [17][23]. Accordingly, its aqueous solution exhibited distinct umami, seasoning, and bouillon-like taste similar to that containing equivalent MSG. Besides the purely chemical model, various studies have made an effort to isolate and identify umami-related compounds from food products, typically soy sauce. Only a few take a closer look at ARPs. 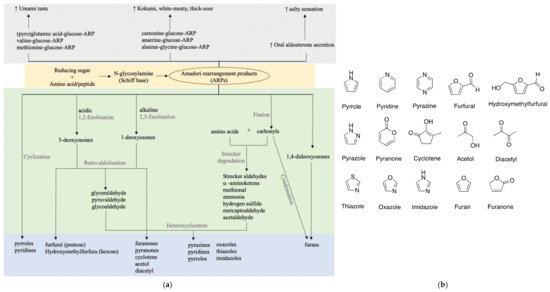 Pyroglutamic acid-, valine-, and methionine-glucose-ARPs were identified in a typical Japanese soy sauce named koikuchi shouyu at subthreshold concentrations, partially to contribute to the umami taste [24]. Similar umami enhancing was also reported for glutamic acid-glucose-ARP found in 25 commercial soy sauces [25]. A simultaneous quantification method of 20 ARPs in soy sauce using LC-MS was later proposed and verified in six types of soy sauce [26]. The omission of an ion-paring reagent and sample derivatization make it an applicable and propagable analytical method for ARP detection in broader food products. Besides soy sauce, umami or kokumi orosensation is always associated with meaty broths. Unsurprisingly, ARPs of dipeptide carnosine-glucose, anserine-glucose, alanine-glycine-glucose were elucidated to contribute to a white-meaty and thick-sour orosensation of chicken broth and traditional French meat-containing broth called Pot-au-Feu [27][28][29].

Roughly, ARPs exist in subthreshold concentrations individually in food products. Though not as the dominant and key taste/flavor component, they exhibit critical umami enhancing properties and the total sufficient amount and diversity affect the intensity and richness of the overall taste.

In addition to the umami taste, the salty taste is synchronously found in protein hydrolysates such as fish protein and peanut protein hydrolysates [30]. As mixtures of diverse amino acids and peptides, the protein hydrolysates may contain plenty of ARPs and correlate with a salty sensation. A supporting study was demonstrated in enzymatic hydrolysates of pea protein [31]. The concentration of Maillard reaction intermediates (MRIs) including ARPs derived from pea protein hydrolysates showed a positive correlation with umami and saltiness. Only 0.1% dosage of MRIs can attain 20% salt reduction. Further evidence was from direct evaluation of the pure ARPs. Proline-glucose-ARP is reported to provide a salty sensation as well as significant umami enhancement [32]. Electronic tongue and sensory evaluation confirmed that 0.4% of ARP addition contributed to 20% salt reduction in achieving equivalent saltiness. The mechanism comes from elevated oral aldosterone secretion stimulated by ARPs, which is strongly associated with salt sensitivity [33]. These studies illustrated that ARPs can also act as natural salt enhancers and address the call of an adult’s daily salt intake reduction to 5 g by World Health Organization.

Besides umami, salty and kokumi taste, ARPs may also have a potential association with other tastes such as sweet, bitter, and sour, because numbers of studies have illustrated correlations between these tastes and protein hydrolysates/peptides [34][35].