The Streptococcus genus belongs to one of the major pathogen groups inducing bovine mastitis. In the dairy industry, mastitis is the most common and costly disease. It not only negatively impacts economic profit due to milk losses and therapy costs, but it is an important animal health and welfare issue as well.

Over 130 pathogens are known to be associated with bovine mastitis [1][2], some of them belonging to the Streptococcus genus. Streptococci are gram-positive bacteria of spherical shape (0.5–2 µm) that usually form pairs or chains. They are classified on the basis of colony morphology, hemolysis, and serologic specificity into the Lancefield group taxonomic system. Many of them are facultative anaerobe, non-pathogenic and belong to the commensal microbiota of humans and animals. However, some streptococci can cause severe diseases and health issues, such as bovine mastitis. Here, the most relevant species are S. agalactiae, S. dysgalactiae ssp. dysgalactiae (hereinafter referred to as S. dysgalactiae) and S. uberis. Streptococcal pathogens rarely associated with bovine mastitis are S. canis, S. lutetiensis and S. equinus.
Mastitis is the most common and costly disease in dairy industry and of worldwide relevance [3][4]. The economic losses of mastitis are calculated with 124€ (=147$) per cow per year, resulting in losses of 500 million, 3 and 125 billion € in Germany, the EU and worldwide, respectively [5]. Global bovine mastitis rates are typically between 30–50% of all cows per year [3][6]. Next to the financial losses due to less milk yield and quality, the veterinary treatment, medication, and increased personnel expenses, mastitis is an important issue of animal welfare and the main reason for dairy cow culling. Mastitis infected cows can show a wide range of symptoms: swelling, heat and pain of the udder, milk with abnormal appearance, increased body temperature, lethargy, and anorexia [6][7]. Bovine mastitis can be classified into three classes according to the inflammation degree: clinical, subclinical, and chronic [5]. Clinical mastitis is characterized by visible abnormalities of cow and milk, which is not the case for subclinical mastitis. Here, only the milk yield and somatic cell count in the milk are changed. The incidence of subclinical mastitis is estimated to be 15–40 times higher than for clinical mastitis [8]. Therefore, subclinical mastitis is economically more relevant due to its higher frequency and capacity to reduce milk yields while going unnoticed. The average duration of a streptococcal mastitis is 12 days but can be prolonged for >300 days in chronic cases [9]. If an acute mastitis is not successfully cured, it can become chronic and lead to reduced fertility [4]. S. uberis and S. agalactiae are well-known pathogens able to induce chronic mastitis [10][11]. Treatment and prophylaxis of mastitis are the most common reasons for antibiotic usage in dairy cows [12][13], bearing the risk of enhanced selection in favor of antimicrobial resistant microorganisms [1][5].

Streptococci are reported to be among the main pathogens causing bovine mastitis all over the world [9][14]. Mastitis pathogens can be classified in contagious and environmental [5]. Contagious pathogens are adapted to survive within the host and they spread from cow to cow primarily through the milking process. Contagious bacteria have the potential to spread within a herd easily and widely. In contrast, environmental pathogens are able to survive outside the host and are part of the normal microflora of the cow’s vicinity. Exposure through environmental streptococci occurs during and between milking, during the dry period or prior parturition of heifers [9]. The pathogen exposure is related to their environmental abundance, which is influenced, e.g., by humidity and temperature. Environmental pathogens invade the udder when the teat channel is opened after milking or after damage.
S. uberis is primarily environmental, however cases of contagion have been observed [15]. The species is mostly alpha-hemolytic, capable of partial hemolysis, but has also been shown to be non-hemolytic in some cases. Biochemical identification is facilitated by a variable CAMP (Christine–Atkinson–Munch–Peterson test) phenotype as well as aesculin, sodium hippurate and inulin degradation. Global Lancefield classification of S. uberis is quite challenging, since some strains have been shown to be Lancefield E, G, P or U positive. Since the first isolation of S. uberis from a bovine mastitis case in 1932, the pathogen has been detected in a variety of bovine host infections such as lactating cows, dry cows, heifers, and multiparous cows [15].
For S. dysgalactiae, the classification in environmental or contagious is not clear. Due to its ability to survive within the host and in the environment, it is described as an intermediate pathogen [16]. The majority of S. dysgalactiae strains are non-hemolytic, although alpha-hemolytic exceptions exist. Phenotypically, it is CAMP negative, does not degrade aesculin and is usually classified Lancefield group C. S. dysgalactiae is primarily associated with bovine infections, but other ruminants, such as goats or sheep, may be affected as well.
S. agalactiae is a contagious pathogen but may also colonize the gastrointestinal tract of dairy cows. In bovine mammary glands, S. agalactiae can survive indefinitely by forming biofilms and is heavily associated with subclinical mastitis [5]. S. agalactiae is within the Lancefield group B classification. The bacterium is generally considered beta-hemolytic, but some non-hemolytic strains have been observed and CAMP positive. S. agalactiae has nine distinctive serotypes labeled Ia, Ib, II, III, IV, V, VI, VII, and VIII, with a tenth serotype labeled IX discovered in 2007. Pathogenicity of S. agalactiae varies with its serotype. Next to dairy, this species is a highly relevant human pathogen at early ages, since it is among the most common causes of bacterial meningitis in neonates. In the United States, between 2005 and 2006, the most common S. agalactiae serotype implicated in invasive human diseases was serotype V, accounting for more than 29% of the recorded cases at the time, followed by serotypes Ia, II and III [17]. A myriad of cases have been shown that S. agalactiae can be hosted by piscine and aquatic mammals as well. Multilocus sequence typing has allowed the description of the phylogenetic relations between the different hosts of S. agalactiae by assigning sequence types (ST) based on their allele numbers. Some strains from piscine hosts were shown to be pathogenic to humans as well. Interestingly, most human STs are quite distinct from bovine STs, apart from the bovine ST-23 and ST-61 strains, which have a genetic relation with human ST-23 and ST-17. These two strains belong to serotypes Ia and III, respectively, and are heavily associated with neonatal infections [18][19][20].
S. canis belongs to the contagious pathogens and is grouped to Lancefield group G. It shows a beta-hemolytic, CAMP negative, and aesculin hydrolyzing phenotype. S. equinus is classified as environmental pathogen and to the Lancefield group D. Its phenotype is a variable hemolysis, CAMP negative and aesculin hydrolysis positive. S. lutetiensis is a contagious streptococcal species within the Lancefield D group. It is characterized by alpha-hemolysis and a CAMP negative, aesculin hydrolyzing phenotype.

During the infectious process, streptococci face a diversity of changing environments and hence need to adapt to varying conditions for successful infection. As a consequence, they express a number of virulence factors that allow survival and replication in different host tissues during pathogenesis, e.g., by conferring adhesion and invasion to host cells or avoidance of immune recognition and subsequent degradation. The virulence factors of S. uberis, S. dysgalactiae, and S. agalactiae are summarized in Figure 2. 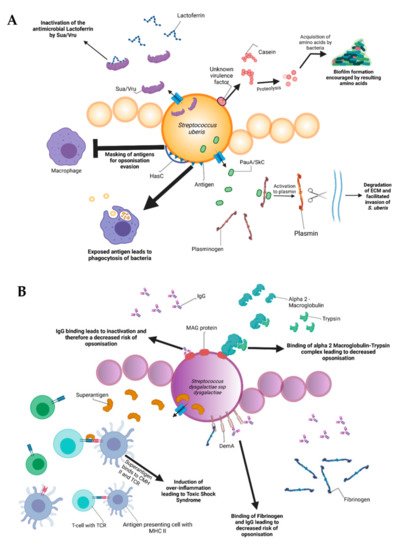