Indexes simplify and communicate complex information and their primary purpose is to guide an evaluation process by helping policy-makers act and then assess, measure and monitor policy creation. This paper discusses the principles that determine firstly role of cities, we see how development spreads or distributes within the country. We observe how these principles impact the selection of location and how we can predict the future of developing cities. We describe which indicators are important for several reasons: the debate about what should be an indicator triggers discussion as to what is important to a city, it gives the city a goal and action plan by making explicit which target it wants to reach and so creat City Development Index es aspirations, it provides an opportunity to assess strengths and weaknesses and how these might be addressed. Finally, based on the principles discussed, we used Principal Components Analysis to calculate the City Development Index for Armenian cities.

Sustainable urbanization is key to successful development. Understanding the key trends in urbanization likely to unfold over the coming years is crucial to the implementation of the 2030 Agenda for Sustainable Development, including efforts to forge a new framework of urban development. Armenia’s population peaked at 3,604,000 in 1991 and declined to 3,010,600 in the Jan 2015 state statistical estimate. This represents a 19.7% decrease in total population since the peak census figure. At last, example of urbanization: See Population of Cities in The Republic of Armenia (Fig 1). The City Development Index has separate sub-indices for Infrastructure, Waste Management, Health, Education, and City Product, which are averaged to form the CDI. Each sub-index is a combination of several indicators that have been normalized to give a value
between 0 and 1. Because the variables used to make up the CDI are strongly related to each other, there are a number of ways to calculate the CDI that give almost identical results. The weightings given to each indicator have been initially calculated by a statistical process. 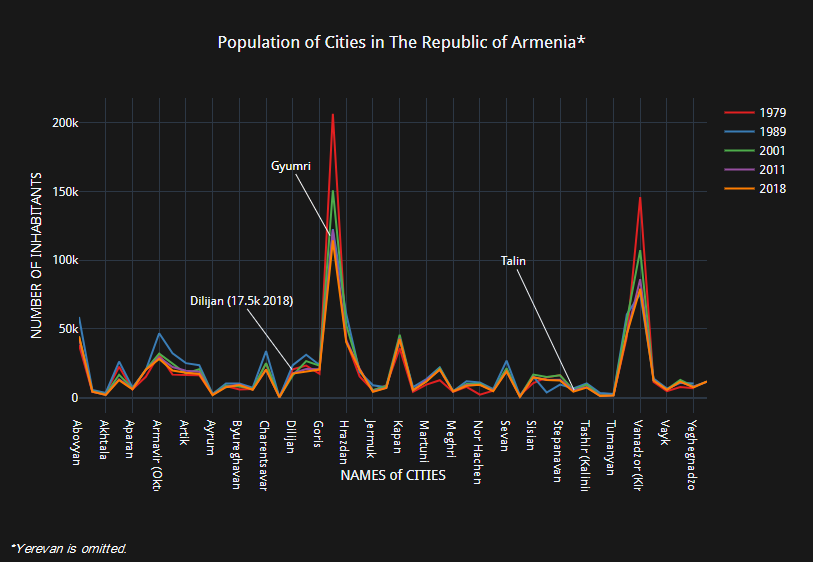 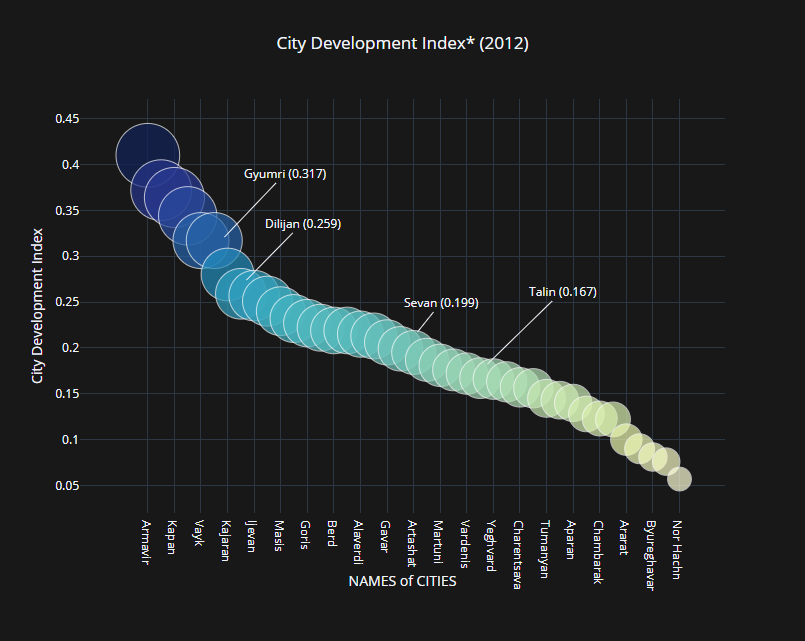 The research aimed at calculating the development level of Armenian cities a methodology for measuring performance success of urban development, which would be useful within the national as well as international comparable city sample. For the testing purposes, the selection of cities followed certain criteria: cites with have more than five thousand population. The determination of adequate measurement indicators, closely associated with evaluation of known methodological concepts and relevant databases, resulted in obtained useful tool: a system of 18 selected indicators by field measurement, meaningfully divided into four areas and added categories to enable ranking of comparable Armenian cities. Following the methodology of CDI where we have used for the weightings given to each indicator have been initially calculated by a statistical process called Principal Components Analysis and then simplified.In this context, urban policy makers, planners, property developers, and constructors need to see themselves as change-managers seeking innovative solutions to adapt and regenerate cities so as to support more sustainable lifestyles. For more effective urban policy Governments in developing countries need a measuring system, so CDI can help decision-makers and professionals.