Several miRNAs are associated with organ-specific and systemic fibrosis in the liver. Individual expression of miRNAs in plasma or serum is useful for liver fibrosis detection. In addition, some miRNAs can distinguish between early and late fibrosis with high sensitivity and specificity equal to or greater than the APRI and Fib-4 index.

Activation of hepatic stellate cells (HSCs) is a pivotal event in liver fibrosis [1], and various inflammatory and fibrotic pathways are involved [2]. Activated HSCs are precursors of myofibroblasts that produce extracellular matrix (ECM) in the liver. Therefore, the treatment of hepatic fibrosis requires the prevention of hepatocellular damage and control of activated HSCs [3]. If HSC inactivation can be induced by cell- or target-specific pharmacological interventions, then, more effective, less toxic, and more accurate anti-fibrotic treatments than the currently available ones can be developed.

HSCs, also known as Ito cells, are fat-storing cells containing vitamin A which are found in the space of Disse and account for approximately 10% of the total number of liver cells. HSCs correspond to pericytes that surround the sinusoidal endothelial cells with branch-like projections and contact hepatocytes [4]. HSCs have also been suggested to serve as antigen-presenting cells in the liver, presenting lipid antigens to CD1-restricted T lymphocytes such as natural killer T (NKT) cells and promoting NKT cell proliferation by presenting hepatic NKT cell lipid antigens via interleukin (IL)-15 [5].

EVs have attracted attention as delivery media for functional RNAs, including miRNAs. Exosomes are a subset of EVs which are secreted from the endoplasmic reticulum in cells with a lipid bilayer membrane with an average diameter of 30–100 nm [6][7]. They contain mRNAs and miRNAs which they transmit between cells [6]. The endoplasmic reticulum-derived EVs, including exosomes, contain RNA, proteins, and other information from the donor (EV–secreting) cell, and transmit this information to the recipient cell. miRNAs are mostly contained in EVs and are transported to recipient cells by intercellular transport, affecting signal transduction in recipient cells and cell phenotype. miRNAs in EVs extracted from patients are useful as disease biomarkers for various diseases [6]. In addition, a new drug delivery system that hijacks exosomes to deliver anti-miR oligonucleotides into the cells that receive them has been developed and is expected to have therapeutic applications [8].

Furthermore, it is expected to be applied to the diagnosis of liver fibrosis and to the development of novel therapeutic agents using miRNAs.

Several miRNAs are associated with organ-specific and systemic fibrosis in the liver [9]. Individual expression of miRNAs in plasma or serum is useful for liver fibrosis detection [10][11]. In addition, some miRNAs can distinguish between early and late fibrosis with high sensitivity and specificity equal to or greater than the APRI and Fib-4 index [12][13]. For example, patients with advanced cirrhosis showed significantly lower levels of miR-29a in their serum compared to healthy controls and patients with early fibrosis [14]. Additionally, serum levels of miR-138 and miR-143 are characteristic of the later stages of liver fibrosis and thus, miR-138 may be useful for detecting fibrosis in its early stages [15]. Furthermore, serum levels of miR-34a and miR-122 correlate with the progression of fibrosis, especially in patients with chronic hepatitis C or nonalcoholic fatty liver disease (NAFLD) [16]. In addition, miR-221 is upregulated in patients with liver cirrhosis [17]. Elucidation of the relationship between miRNAs and liver fibrosis may be useful for detection of fibrosis without invasive liver biopsy, early therapeutic intervention, and identification of high-risk patients. There are various microRNAs that are expected to be biomarkers for liver diseases ( Table 1 ).

Recently, the relationship between liver diseases and various miRNAs has been confirmed ( Table 2 ). Some miRNAs such as miR-21, miR-221/222, and miR-181b, promote liver fibrosis through the TGF-β and NF-κB pathways [51]. In addition, miR-221 regulates multiple targets, including cyclin-dependent kinase inhibitors (CDKN1C or CDKN1B), cytokine signaling 1, E-cadherin, phosphatase and tensin homolog (PTEN), and Bcl-2 modifying factor, which are involved in liver fibrosis [17]. miR-214 also plays an important role in liver fibrosis by regulating the expression of suppressor of fused homolog protein, and knocking down its expression alleviates liver fibrosis in carbon tetrachloride (CCL4)-treated mice [52]. Moreover, the knockdown of the miR-23b miRNA cluster promotes bile duct differentiation and suppresses or restores TGF-β-induced liver fibrosis depending on stellate cell activation [53]. 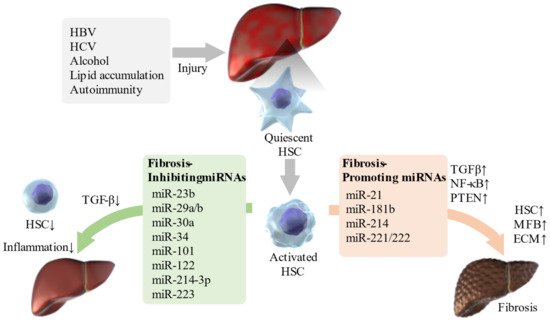 In contrast to EVs in serum extracted from mice with induced liver fibrosis, miR-34c, miR-151-3p, miR-483-5p, miR-532-5p, and miR-687 were upregulated in serum EVs from mice without fibrosis. When these EVs were administered to mice with CCL4-induced liver injury, hepatocellular damage and liver fibrosis were suppressed in the healthy mouse-derived EV group, and inflammatory cytokines and transaminases in the blood were reduced. Furthermore, in serum EVs from patients with F3/4 hepatic fibrosis and healthy subjects, levels of miR-34c, miR-151-3p, miR-483-5p, and miR-532-5p were upregulated in healthy subjects compared to levels in patients with F3/4 hepatic fibrosis. When EVs from healthy subjects were administered to human-derived HSCs, HSC activation was suppressed. These EV miRNAs suppress HSC activation and contribute to the suppression of liver fibrosis [87].

In addition to HCC, gastrointestinal bleeding due to portal hypertension, ascites, portal vein thrombosis, and HE are some of the most common complications of cirrhosis.

Portal hypertension is caused by an increase in portal venous inflow and intrahepatic vascular resistance, leading to esophageal varices, ascites, HE, and hypersplenism, and it is a major cause of death in patients with cirrhosis [88]. TGF-β-mediated HSC activation is involved in ECM production and is a mechanistic factor in regulating vascular resistance and pressure in the liver [89]. Animal studies have shown that inhibition of TGF-β1 synthesis and blockade of TGF-β receptors can significantly reduce portal hypertensive pressure [90]. Intrahepatic angiogenesis by vascular endothelial growth factor (VEGF), an angiogenic growth factor, is also a cause of sinusoidal systemic circulation and portal hypertension [91]. miR-29 acts as an anti-fibrotic mediator by inhibiting angiogenic factors such as VEGF [64]. The miR-126 family is associated with angiogenesis and directly inhibits negative regulators of the VEGF pathway, such as the Sprouty-related, equine herpesvirus-1 domain-containing protein 1 (SPRED1) and phosphoinositol-3 kinase regulatory subunit 2 (PIK3R2) [65]. Thus, these miRNAs, which affect TGF-β and VEGF, may be key to the treatment of portal hypertension.

Patients with ascites, spontaneous bacterial peritonitis (SBP), and hepatorenal syndrome had significantly lower levels of miR-122 than those without these complications. In addition, serum miR-122 levels were associated with survival of patients with cirrhosis, independent of the Model for End-Stage Liver Disease (MELD) score or patient ’s age [20]. One study indicated that miR-155 is an outstanding diagnostic marker for SBP, and detection of both serum CD64 and calprotectin levels also provide a more useful diagnosis when using blood samples from patients with cirrhosis and ascites [21]. Furthermore, miR-155 [22] and miR-223 [23] were elevated in ascites from patients with cirrhosis and SBP, indicating that these miRNAs may be involved in the immune response in ascites upon SBP. Animal models of HE also show changes in miRNAs in the blood and cerebral cortex [93][94]. In the HE model, ammonia-induced changes in miRNA expression regulate the expression of heme oxygenase 1 (HO-1) and induce astrocyte senescence [95].

4. Association of the Causes of Liver Cirrhosis and miRNAs

Direct-acting antivirals are highly effective, but HCV elimination is not a cure for liver disease, especially in patients with advanced fibrosis or cirrhosis. However, miRNAs show promise as a treatment for residual liver fibrosis after antiviral treatment.

Since the incidence of NAFLD/NASH is expected to continue to increase, there is an urgent need to develop early diagnosis and treatment methods using miRNAs.

In recent years, the pathological and diagnostic relevance of miRNAs in autoimmune liver diseases have been reported.