The nasal route has been used for many years for the local treatment of nasal diseases. More recently, this route has been gaining momentum, due to the possibility of targeting the central nervous system (CNS) from the nasal cavity, avoiding the blood−brain barrier (BBB). In this area, the use of lipid nanoparticles, such as nanostructured lipid carriers (NLC) and solid lipid nanoparticles (SLN), in nasal formulations has shown promising outcomes on a wide array of indications such as brain diseases, including epilepsy, multiple sclerosis, Alzheimer’s disease, Parkinson’s disease and gliomas.

The anatomical and physiological characteristics of the different regions of the nasal cavity are summarized in Table 1 and the location of each region is shown in Figure 1 [1][2][3]. 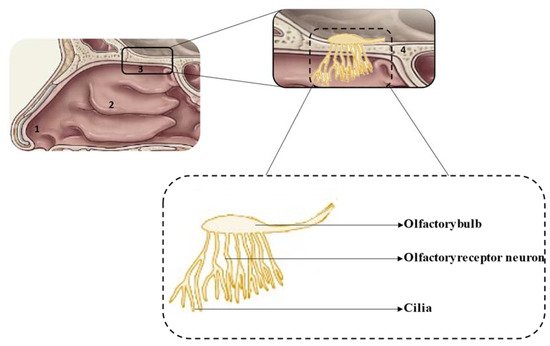 After nasal administration, different pathways of drug transport from the nose to the brain can occur, which have been divided into direct transport, indirect transport and a combination of both. Besides, some drug can be eliminated by the mucociliary clearance mechanism before reaching the olfactory or/and respiratory regions. To our knowledge, there is no confirmation of the exact transport mechanism followed by intranasal drugs, which seems to be influenced by the drug’s molecular characteristics, formulation consistency (liquid or semi-solid) and type of application device. Thus, it is impossible to assess the exact amount of drug reaching the brain after intranasal administration via a specific transport mechanism, although good approaches have been reported in in vivo studies that compared the results of the amount of drug reaching the brain after intranasal and intravenous administrations. In addition, toxicological concerns were raised related to the possibility of an accumulation of excipients in the brain and the risk of impairment of the mucociliary clearance mechanism. Figure 2 summarizes the different drug pathways after nasal administration [9][4][10][11].

Some factors of the nasal formulations can interfere with drug absorption and should be considered. For instance, these formulations should be isotonic (i.e., osmolality between 280 mOsm/Kg and 310 mOsm/Kg) and have a pH close to that of the nasal cavity (5.0–6.8), to avoid discomfort, mucosal irritation and/or damage to the cilia, after administration [2][12]. In addition, the drug excipients used should be compatible with the nasal mucosa to avoid irritation and toxicity [13][14].

One of the main disadvantages of intranasal administration is the rapid elimination of the drug through mucociliary clearance (a physiological defense mechanism that eliminates foreign substances every 15–30 min). To avoid this, substances that interact with the mucus can be added to the formulations. The mucus is composed of water, mucin and other proteins, electrolytes, enzymes and lipids [6]. Mucin is a negatively charged glycoprotein and, therefore, positively charged formulations can easily bind it through electrostatic interactions, which facilitates mucoadhesion. In contrast, negatively charged formulations can penetrate mucin chains and hydrogen bonds can be formed, which improves mucoadhesion [2][15].

New strategies to overcome the drawbacks of the nasal formulations have been investigated. For example, the use of nanocarriers, such as lipid nanoparticles, to achieve prolonged release, protection against enzymatic degradation and improve targeting to the brain [16]. The use of permeation enhancers, including mucoadhesive polymers and in situ hydrogels to improve drug retention time in the nasal mucosa and, consequently, drug absorption is also a commonly used strategy [16]. There are already marketed nasal formulations (e.g., Nasonex and Rhinocort) that increase viscosity after administration, improving the retention time of the drug in the nasal cavity [2].

The inclusion of lipid nanoparticles, such as SLN and NLC, in nasal formulations can improve the effectiveness of drugs. Regarding their advantages over other colloidal carriers, lipid nanoparticles have been described as superior carriers for nasal drug delivery. For instance, they enable the direct transport of drugs from the nose to the brain, via olfactory and trigeminal nerves, and adhere to the olfactory epithelium, increasing contact time with the nasal mucosa. In addition, they provide prolonged drug release, drug protection from nasal enzymatic degradation and have low or no toxicity due to the use of generally recognized as safe (GRAS) excipients [17][9][4][18][19].

To understand the specific features of lipid nanoparticles for nasal delivery, it is important to first clarify their specific characteristics. Briefly, SLN were first created and consist of aqueous dispersions of nanoparticles made by one solid lipid and stabilized by one or two emulsifiers. Their solid matrix enables prolonged release, while protecting the encapsulated molecules. Although SLN appear to be effective drug carriers, some drawbacks have been observed, in particular, poor storage stability related to the occurrence of lipid polymorphic transitions that originate molecule release and nanoparticle aggregation. To circumvent these problems, NLCs were developed, which also consist of aqueous dispersions of nanoparticles with a solid lipid matrix composed of one solid lipid and one liquid lipid and stabilized by one or two emulsifiers. The presence of oil within the lipid matrix causes a more disordered internal structure that leads to fewer lipid polymorphic transitions during storage, producing higher stability.

Thereby, the use of SLN and NLC has been extensively investigated to improve drug delivery through different administration routes, as they show advantages over other nanosystems, including the use of GRAS excipients, easy industrial manufacture, high encapsulation efficiency, protection and prolonged release of lipophilic molecules, and good storage stability. In this field, very complete review articles are available [20][21][22][23][24][25][26][27][28][29][30][31][32][33][34].

2.1. In Vitro Studies with Nasal Formulations of NLC and SLN

The use of aqueous dispersions of SLN and NLC show limitations in some administration routes, including cutaneous, ocular and nasal. For instance, the low viscosity of these dispersions decreases the contact time with the locale of application, reducing the therapeutic effectiveness of the drug. To avoid this, different strategies have been used, including the incorporation of SLN and NLC in conventional semisolid formulations, such as hydrogels, creams and ointments, or the addition of viscosifying agents, mucoadhesive polymers or in situ gelling polymers, directly to the aqueous phase of the SLN and NLC dispersions [24][35][36][37][38]. Examples of viscosifying agents used in nasal formulations containing lipid nanoparticles include gellan gum, poloxamers, and carbomers [1][39][40], while commonly used mucoadhesive polymers are hypromellose, carbomers, alginate, hyaluronic acid, chitosan, polyethylene glycol, cyclodextrins, polyacrylic acid and cellulose derivatives, such as carboxymethylcellulose, hydroxypropyl methylcellulose and methylcellulose. Examples of in situ gelling polymers include poloxamers, such as poloxamer 407 and 188, gellan gum, pectin, sodium alginate, carrageenan and xyloglucan [1][2][11][13][40][41].

Regarding nasal administration, the use of liquid and semisolid formulations has been investigated and it seems that both formulations promote the efficacy of drugs for different therapeutic applications. In the following sections, examples of the most relevant studies are reported. The main outcomes of these studies are summarized in Table 2. Over the past two years, about ten studies have been published investigating the use of SLN or NLC for intranasal delivery, mainly for the treatment of neurological disorders.

Jojo et al. [47] evaluated the nasal cytotoxicity of optimized pioglitazone-loaded NLC formulation for the treatment and management of Alzheimer’s disease. This antidiabetic drug has been extensively investigated because the most common cause of dementia in the elderly is a metabolic disorder associated to an impaired brain insulin signalling. SH-SY5Y neuroblastoma cells were used to conduct in vitro studies, evaluating the nasal cytotoxicity of pioglitazone-loaded NLC and pure pioglitazone, through cell viability and the lethal concertation 50 (LC50). Based on the results, the LC50 was 16.626 µg/mL for pure pioglitazone and 17.3874 µg/mL for pioglitazone-loaded NLC. In addition, the cell viability was similar for both formulations, being 69.15% for pioglitazone-loaded NLC and 66.89% for pure pioglitazone at a concentration of 10 µg/mL. The results showed that there was no significant change between the NLC formulation and the pure drug, indicating that pioglitazone-loaded NLC is safe for neuronal cells. In another study, Silva et al. [49] evaluated the in vitro cytotoxicity of tacrine-loaded NLC and tacrine-loaded NLC conjugated to an amphipathic peptide in SH-SY5Y neuroblastoma cell lines. The formulation cytotoxicity was evaluated through the MTT assay and SBR assay. From the results, when comparing the same concentration of empty NLC and tacrine-loaded NLC, the cell viability was similar. However, the cell viability of tacrine-loaded NLC conjugated to an amphipathic peptide at the same concentration decreased dramatically. Therefore, a concentration up to 10 µM of tacrine was considered safe. These results showed that tacrine-loaded NLC is safe for neuronal cells, being a promising formulation for the management of Alzheimer’s disease. Trapani et al. [43] compared the in vitro cytotoxicity of grape seed-derived extract dopamine-loaded SLN, dopamine-loaded SLN and grape seed-derived extract-loaded SLN. The conjugation of dopamine with an antioxidant grape seed-derived proanthocyanidin reduces the oxidative stress observed in Parkinson’s disease. The in vitro studies were carried out in SH-SY5Y neuroblastoma cells and olfactory ensheathing cells. One day after the beginning of the tests, it was observed that none of the formulations presented cytotoxicity to the olfactory ensheathing cells and to the SH-SY5Y neuroblastoma cells, in a concentration range of 18–75 µM and 4–34.5 µM of dopamine and grape seed-derived extract, respectively. Therefore, the authors concluded that the tested formulations can be used to improve Parkinson’s disease therapy.

Malvajerd et al. [42] developed curcumin-loaded SLN and curcumin-loaded NLC to study their potential for brain delivery in the treatment of CNS disorders. Before performing in vivo experiments, the researchers evaluated the in vitro cytotoxicity of the formulations in mouse fetal fibroblast cells using the MTT assay. The results showed a high cell viability (abound 80%) for curcumin-loaded SLN and for curcumin-loaded NLC at concentrations of 1–10 µg/mL, while a slight decrease in cell viability was observed at higher concentrations (20 µg/mL). Thus, the authors concluded that no remarkable cytotoxicity was observed in any of the tested formulations of lipid nanoparticles containing curcumin.

Sarma et al. [50] investigated the in vitro cytotoxicity of two different tenofovir disoproxil fumarate-loaded NLC, one with Tween 80 and the other with Tween 80 and Pluronic F68, in bEnd.3 cells of the cerebral cortex, after 24 h and 72 h of exposure. Similar cell viability was observed for both formulations, and at both times, at concentrations of 5, 10 and 50 µg/mL. After 72 h, cell viability decreased at concentrations of 100 µg/mL for both formulations. From these results, the authors concluded that the use of emulsifiers did not cause differences in cytotoxicity. In addition, at concentrations up to 100 µg/mL, tenofovir disoproxil fumarate-loaded NLCs are safe for intranasal administration. Based on these findings, the use of the tenofovir disoproxil fumarate-loaded NLCs for the treatment of Acquired Immune Deficiency Syndrome (AIDS) was proposed.