The poult enteritis complex (PEC) is common in turkeys and characterized by depression, enteritis, diarrhea, low feed conversion ratio and poor weight gain. It is a general term denoting all infectious intestinal diseases of young poults with uncertain etiology. The PEC is caused by a group of multifactorial infectious and non-infectious agents with significant effect on turkeys less than six weeks old.

The poult enteritis complex (PEC) is common in turkeys and characterized by depression, enteritis, diarrhea, low feed conversion ratio and poor weight gain. It is a general term denoting all infectious intestinal diseases of young poults with uncertain etiology [4]. The PEC is caused by a group of multifactorial infectious and non-infectious agents with significant effect on turkeys less than six weeks old [5]. Several syndromes were reported as a part of PEC such as the poult enteritis and mortality syndrome (PEMS), maldigestion syndrome, runting stunting syndrome (RSS), poult malabsorption syndrome, spiking mortality of turkeys (SMT), poult enteritis syndrome (PES) in young turkeys between 1 day and 7 weeks and light turkey syndrome (LTS), a problem of lower body weight at market age turkeys [6][7].

Several causative agents are implicated as the main causes of PEMS such as enteroviruses (turkey corona virus (TCoV), turkey astroviruses (TAstV), reoviruses and adenoviruses)), and also bacteria such asE. coli,Salmonella,Campylobacter,Clostridia,CryptosporidiumandCochlosoma[5][6][8][9][10][11][12][13][14]. The severity of the disease depends on the virulence of enteric viruses, coinfections, other interacting factors such as the age and immune status of the affected birds [15] and management, nutrition and hygienic measures (Table 1). Therefore, the true role of viruses in naturally occurring PEMS is difficult to assess as sole etiologies [16]. In this review, we will discuss the possible causes, diagnosis, and preventive measures of PEMS as a major challenge facing turkey production.

Later on, the virus was reported in several countries worldwide including Australia, Brazil, Italy, UK, France and Poland [17][18][19][20][21][22]. TCoV infections remain a leading cause of massive economic losses in young turkeys in many countries [23]. The γCoV contains three subgenera, namely,IgacovirusandBrangacovirus, both identified in birds, andCegacovirus, reported in mammals (beluga whale, SW1 virus) [24]. TCoV belongs to the genus γCoV and subgenusIgacovirus, which contains other avian coronaviruses (ACoVs) such as infectious bronchitis virus (IBV) and guinea fowl coronavirus (GfCoV).

TCoV causes high morbidity rates that may reach 100% and a sudden increase in mortality of 10–50% in turkeys during the first 4 weeks of age. Although TCoV is more common in young poults, exposure of older ages results in stunting with low mortality rates [30]. The natural route of infection of TCoV is orally by ingestion of contaminated fecal materials. Movement of contaminated equipment, personal or vehicles and other birds probably spread the virus.

TAstV infections are common in 4-week-old turkey poults as a coinfection in enteric disease. Three astrovirus types, namely, TAstV-1 (7003 nt), TAstV-2 (7325 nt) and avian nephritis virus (ANV, 6927 nt) have been detected in commercial turkey flocks, with a prevalence of 100, 15.4 and 12.5%, respectively. Additionally, TAstV-2 has been detected in apparently healthy flocks of turkeys [33][34]. The ANV is associated with nephritis and RSS in chicken and turkey flocks and other avian species [35].

turkey poults decreased the absorption of D-xylose [36], resulting in maldigestion of disaccharides, malabsorption and consequent osmotic diarrhea [37]. It was also found that 24 h after experimental infections of one-day-old turkey poults, birds showed signs of intestinal infection including yellowish brown watery to foamy diarrhea, followed by emaciation and stunting growth [38][39]. Significant reduction of body weights as a result of decreased absorption of nutrients was also found [39]. The main pathological changes are mainly located also in the digestive tract and usually non-specific including dilated ceca with yellowish frothy contents, fluid distention and inflammation of intestines [38].

Adenoviruses are described in many species of vertebrate animals, including mammals, birds, reptiles, amphibians and fish [40][41][42]. Three TAdV species, namely TAdV-B (type TAdV-1), TAdV-C (type TAdV-4) and TAdV-D (type TAdV-5) can infect turkeys [43][44][45], isolated from respiratory disease and PEMS. These viruses also cause inclusion body hepatitis in turkey poults and may be responsible for lower hatchability rates in breeder flocks [46][47]. Generally, further studies are required to understand the pathogenicity of aviadenoviruses in turkeys, hence all aviadenoviruses were identified within diseased turkey flocks in Germany, however, no apparent link between case history and type of isolate were identified [44].

Surprisingly, the HE virus does not replicate in intestinal epithelium; however, it replicates in the endothelial cells that causes vascular damage and ischemic necrosis of intestinal villi. The main signs include depression, bloody droppings and sudden death [48]. Microscopic examination revealed characteristic lesions including hyperplasia of white pulp and lymphoid necrosis in the spleen at death [48]. Moreover, severely congested mucosa, degeneration and sloughing of the villus epithelium and hemorrhage at the villus tips were reported.

Rotaviruses are non-enveloped icosahedral particles and contain double stranded-RNA of 11 segments, which encode structural (VP1 to VP4, VP6 and VP7) and non-structural proteins (NSP1 to NSP6). , however, rotaviruses that are antigenically distinct (referred as rotavirus-like particles) from group A turkey rotaviruses were also detected in turkey poults [49]. The pathogenicity of rotaviruses in turkeys depends on several factors including the virulence of involved strains, coinfections with other pathogens and management [50]. The main clinical signs of rotaviruses infections are diarrhea, depression, high mortality rates, chronic runting and stunting.

Avian reoviruses have been associated with enteric disease, arthritis/tenosynovitis, respiratory distress, immunosuppression, poor feed conversion and malabsorption syndrome in poultry [51]. Fusogenic reovirus strains are characterized by the ability to fuse with infected cells and form multinucleated syncytia, affecting mammals, birds and reptiles, while non-fusogenic viruses are mainly infecting mammals [52]. Based on the molecular differences between avian reoviruses, species-specific reovirus types are being described, namely turkey reovirus for turkey, duck reovirus for duck, goose reovirus for goose and avian reovirus chickens [53]. Generally, young birds without maternal antibodies can be infected with reoviruses [54].

The diagnosis of PEMS based on the clinical picture and gross lesions is difficult because there are no specific clinical signs or pathognomonic lesions. Generally, cultivation of some enteric viruses is also a challenge. Therefore, negative contrast electron microscopy (EM), PCR and serology can help in the diagnosis of viruses causing enteric complex in turkeys. While the strengths of the TEM lie in the detection of the entire spectrum of virus groups, the PCR can be used for a more sensitive and differentiated diagnosis after narrowing down the spectrum to certain viruses.

Although the visual representation of viruses using EM requires special knowledge regarding sample preparation and evaluation, this method enables the detection of the entire spectrum of viruses in just one preparation approach with reasonable effort. EM can be particularly successful in virus infections with a high presence of pathogens, for example during an acute infection phase [57]. In addition, with samples with a lower virus concentration, significant virus enrichment can be achieved by means of ultracentrifugation [58]. In addition to the identification of known viruses that can be recognized in the context of mono or mixed infections, it is also possible to discover new and previously unknown viruses [59][60].

Molecular-based methods are used also in the diagnosis of enteric viruses of turkeys [15][61][62][63][64][65][66][67][68]. Sellers and his colleagues developed a multiplex RT-PCR for simultaneous detection of enteric viruses in turkeys. The sensitivity and specificity of multiplex polymerase chain reaction (mPCR) was tested and evaluated. The mPCR is advantageous when compared with conventional detection methods because it allows detecting and distinguishing multiple pathogenic agents through the use of one test.

The diagnosis of TCoV depends on EM, PCR and serology. EM was used for identification of TCoV in turkey poults suffering from PEMS. TCoV was detected in turkey poults located in Germany using EM. When identifying TCoV particles, it must be considered that fragments of cell membranes often look very similar to these virus particles (Figure 1). 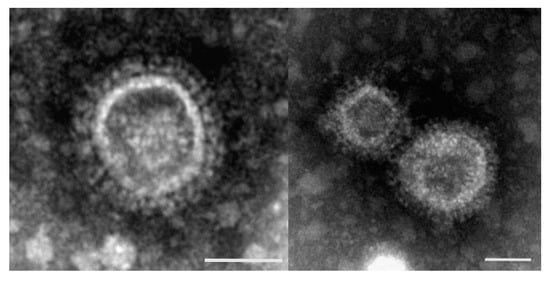 This often makes it difficult to clearly assess electron microscopic specimens. The 3’UTR sequence fragments showed high homologies between the TCoVs strains and IBV [69]. The high sensitivity of this diagnostic method makes it possible to detect even very small amounts of virus particles. These results highlighting that feces and intestinal samples are the best samples suited for PCR detection of TCoV [20].

In contrast, TCoV could not be detected in turkey stocks suffering from PEMS [33][34], highlighting the fact that PEMS is a multifactorial syndrome and other potential causative agents should also be investigated.

In some cases, it is difficult to distinguish between astrovirus particles and other enteral viruses such as picorna and enteroviruses, so that such particles are often referred to as small round viruses (SRV) [39]. The RT-PCR can be used also for the diagnosis of TAstV using primers specific to the polymerase or capsid genes [70][62][71]. Mixed infections with TAstV and TCoV have been reported in turkeys causing a severe negative impact on intestinal absorptive functions as causative factors of PEMS [36]. Additionally, coinfection of turkeys with TAstV and rotavirus was also reported in the US [44].

The diagnosis of adenoviruses depends on virus isolation and molecular identification. Virus isolation can be done using cell cultures derived from the homologous species [64]. However, adenoviruses could be successfully derived from turkeys using chicken embryo liver (CEL) cells isolated from SPF chickens. The main cytopathic effects on CEL cells are rounded cell degeneration after the 1st and 4th passages [44].

Due to the high sensitivity of PCR in determining the genotype of rotaviruses, it is a good alternative to EM or virus In human medicine, PCR methods are established that amplify sections of gene 4 (VP4), gene 9 (VP7) or gene 9 (NSP4) [71][72][73]. To detect avian rotaviruses using PCR, highly conserved primers of the NSP4 gene can be used [34][52]. The NSP4 gene sequences of the rotaviruses detected by these authors were 96.1%–97.5% identical.

4. Prevention and Control of Enteritis in Turkeys

PEMS is an interaction between enteric pathogens and opportunistic infections in young turkeys. The main role of enteric viruses as primary agents in this syndrome is not fully understood. However, it is obvious that the interaction between enteric viruses and opportunistic bacteria/parasites and management increased the pathological effects. The development of PEMS depends on the virus–host interaction, virus pathotype, age of birds, immune status, biosecurity, and healthy conditions of the GIT.

There is an increasing trend to use alternatives to antibiotics including probiotics, prebiotics, organic acids, essential oils and botanical extracts for turkey [74] in the aim of reducing the pathogenic load. Several studies highlighted the benefits of these products in the improvement of animal performance and reduction infections in turkeys [75][76][77][78][79][80]. Lactic acid bacteria (LAB) proved to be an efficient antibiotic alternative to controlSalmonellain turkeys by the reduction of intestinal colonization Higgins and others found also that supplementation of turkey poults with LAB following antibiotic treatment improved significantly animal performance, compared with non-treated or probiotic-treated poults [81].

Generally, protozoan and immunosuppressive diseases such as Marek’s disease in turkeys should be taken in to consideration [86]. The β-glucans have an immunomodulatory effect due to increasing the activity of immune cells such as macrophages and neutrophils [87][88][89]. Due to the negative impacts of protozoan such asHistomonas meleagridisin turkeys on the health and welfare, preventative management measures should be strictly applied to prevent the infection [2]. Additionally, litter management requires also thoughtful consideration and active management [90].

Although there is no specific treatment, the prevention of PEMS includes vaccination against potential pathogens in the case of available vaccines and hygienic measures. Until now, there are no available vaccines against viruses causing PEMS. Although several efforts were done to develop effective vaccine against TCoV using classical methods (attenuated and inactivated vaccines) and molecular based (DNA and vector) vaccines, early and protective humoral and cellular immune responses could not be obtained by the developed vaccines [23]. Further improvements and optimization of vaccination regimes against TCoV are urgently needed.