Pancreatic ductal adenocarcinoma (PDAC) arises from the epithelial cells of the pancreatic exocrine glands and is the most common malignant tumor of the pancreas. In the United States, nearly 60,000 new cases per-year and 48,000 deaths per-year are attributed to PDAC which comprise about 3% of all new cancer cases and 7% of all cancer-related deaths [1]. Unfortunately, improvement in the prognosis of PDAC has been stagnant compared to other cancers and currently, the 5-year survival rate is 3% for metastatic disease and 10% for all stages combined [2]. Among the newly diagnosed cases, only 20% are eligible for curative resection whereas the rest of the patients are limited to palliative systemic chemotherapy [3].
Currently, the standard of care first-line therapy for metastatic PDAC is limited to gemcitabine plus nab-paclitaxel or FOLFIRINOX (folinic acid, fluorouracil, irinotecan, oxaliplatin) [4]. Gemcitabine with nab-paclitaxel demonstrated improved median overall survival (OS) (8.5 vs. 6.7 mos, HR 0.72, 0.62–0.83) as well as disease control rate (DCR) (48 vs. 33%, RR 1.46, 1.23–1.72) over gemcitabine alone. Furthermore, FOLFIRINOX demonstrated improved median overall survival compared to gemcitabine alone (11.1 vs. 6.8 mos, HR 0.57, 0.45–0.73) in the landmark phase III trial [5]. Additionally, certain targeted therapies have demonstrated incremental survival benefits and retrospective database analyses suggest potential benefit of immunotherapy in PDAC [6][7]. Nonetheless, in absolute terms, the clinical benefit of these regimens is largely disappointing and thus novel strategies are needed to change the course of disease.
Glycogen synthase kinase-3 is a serine/threonine kinase initially discovered as a key regulator of cellular metabolism especially in glycogen biosynthesis [8]. Two different isoforms of glycogen synthase kinase-3 have been described—glycogen synthase kinase-3 alpha (GSK-3α) and glycogen synthase kinase-3 beta (GSK-3β) [8][9]. While GSK-3α and GSK-3β are both highly conserved, ubiquitously expressed, and have many shared substrates, they also have non-overlapping target proteins as well as distinct, non-redundant cellular function. Furthermore, glycogen synthase kinase-3 has over 100 known substrates, which underscores the wide range of effect on various intracellular processes. Likely owing to this reason, genetic deficiency of GSK-3β cannot be complemented by GSK-3α [9]. Since their discoveries, GSK-3α and GSK-3β have been implicated in various disease processes including neurodegenerative disease, chronic inflammatory disorders, and neoplastic processes [10]. However, contemporary research has focused mostly on GSK-3β in the context of cancer, especially in PDAC.
Initially, GSK-3β was thought to act as a tumor suppressor. The reason for this was because of its ability to target several well-known protooncogenic proteins such as beta catenin, cyclin D1, c-Jun, and c-Myc for ubiquitin-mediated proteasomal degradation. However, a growing body of research has established the role of GSK-3β as a protooncogenic protein itself, particularly in the context of ovarian cancer, acute leukemias, glioblastoma, neuroblastoma, and PDAC [11][12][13][14]. Given the pleiotropic nature of GSK-3β, the net effect of GSK-3β perturbance on tumor development is likely context dependent. Nonetheless, GSK-3β has been found to contribute to tumorigenesis in the context of PDAC by promoting cell proliferation, survival, and invasion, metastasis, and chemotherapy resistance. Moreover, recent studies have elucidated the immunomodulatory properties of GSK-3β in the context of cancer, most importantly in regulating negative immune checkpoint molecules but also in directly enhancing the activity of innate and adaptive immune cells as it will be described in later sections.

2. Mechanisms of Altered Regulation of GSK-3β in PDAC

Likely because of its wide-ranging effects, there are multiple layers of regulatory mechanisms to control GSK-3β activity. The physiologic regulation of GSK-3β occurs at both pre-translational and post-translational levels. K-ras mutations are the most common and early driver mutations found in pancreatic cancer. Overexpression of constitutively active Ras isoforms can enhance GSK-3β promoter activity and lead to increased transcription via MAPK signaling [15]. Additionally, the role of micro-RNAs in the transcriptional regulation of GSK-3β in PDAC has also been suggested. Namely, the negative regulation of GSK-3β and the Wnt/beta catenin pathway by microRNA-940 may be involved in the development and progression of PDAC [16][17]. Furthermore, GSK-3β has been shown to modulate epigenetic modification in various settings including DNA methylation during genetic imprinting in embryonic stem cells, and histone modification in the regulation of cell proliferatioin [18][19].
Post-translational modification of GSK-3β has been extensively studied and is relevant in the context of PDAC tumorigenesis. First, protein phosphorylation is a major mechanism of GSK-3β regulation. Phosphorylation at the N-terminal S9 by upstream kinases leads to inactivation of GSK-3β kinase activity, whereas phosphorylation of the Y216 residue in the kinase domain is associated with enhanced kinase activity. Notably, pancreatic cancer cell lines characteristically have increased GSK-3β Y216- and decreased S9-phosphorylation, suggesting that GSK-3β is largely in an activated state in PDAC to drive various pro-tumorigenic processes [20][21][22].

3. Role of GSK-3β in PDAC Tumorigenesis

GSK-3β is implicated in cell invasion and metastasis in pancreatic carcinogenesis as its overexpression leads to CXCR4 upregulation and increased MMP-2 expression and results in increased invasiveness of pancreatic cancer cells [29]. GSK-3β inhibition in pancreatic cancer cells leads to perturbations in Rac1 and F-actin subcellular localization, reduced production of MMP-2, and decreased phosphorylation of FAK, leading to inhibition of cell migration and invasion. [23]. Additionally, overexpression of miR-744 and miR-940, which are microRNAs capable of targeting and downregulating GSK-3β mRNA, was found to inhibit cancer cell invasion [16][30]. Thus, increased activity of GSK-3β is associated with increased PDAC invasiveness and metastatic potential while decreased activity is associated with decreased and inhibited invasion.

Consistent with its initial discovery as a regulator of cell metabolism, GSK-3β and its impact on cell metabolism is relevant in tumorigenesis. The regulation of autophagy and glycolysis appears to be important in PDAC. Autophagy is a highly regulated cellular process involved in the turnover and recycling of intracellular components. Altered autophagic processes in tumor cells has been associated with tumor progression and altered tumor immunity. Autophagy has recently been gaining attention as a key mechanism and target for anti-tumor therapy [31]. Increased phosphorylation of ULK1 at S405 and S415, which lead to its activation, is found in several human pancreatic cancer cell lines. Moreover, such pancreatic cell lines notably have increased autophagy. Of note, GSK-3β was recently found to phosphorylate ULK1 at S405 and S415, suggesting its role in mediating autophagy in PDAC. Inhibition of ULK1 phosphorylation at these two residues led to decreased pancreatic tumor cell survival, underpinning the reliance of the tumor cells on autophagy [32]. Thus, autophagy may be yet another cellular process that is altered via aberrant GSK-3β activity in PDAC.

4. Role of GSK-3β in Chemotherapy Resistance in PDAC

PDAC is well noted for its resistance to conventional cytotoxic anti-cancer therapy. Pancreatic tumors are characterized by fibrosis, desmoplasia, hypovascularity, and concurrent activation of various prooncogenic signaling pathways including pro-survival pathways which contribute to its broad drug resistance [33][34]. GSK-3β is central in mediating this drug resistance mainly via upregulation of pro-survival signaling pathways which ultimately lead to upregulation of pro-survival molecules such as Bcl-2 and XIAP [35].
Pre-clinical models have demonstrated synergy in combining cytotoxic chemotherapy and GSK-3β inhibition. The toolkit GSK-3β inhibitor AR-A014418 demonstrated synergistic cytotoxicity in combination with gemcitabine in PANC-1 cells [36][37]. Furthermore, lithium, which is known for its GSK-3β inhibitory activity, has been shown to enhance the anti-cancer activity of gemcitabine via downregulation of the hedgehog-GLI1 pathway [24]. Additionally, a toolkit inhibitor with dual-inhibitory activity of GSK-3β and histone deacetylase 2 was found to enhance the cytotoxicity of gemcitabine and paclitaxel of PDAC cells [38].
GSK-3β inhibition was found to enhance gemcitabine activity in PDAC PDX mice by preventing the triggering of the ATR DNA damage response pathway. GSK kinase activity is required to prevent the degradation of a key adaptor molecule which is necessary for the full activation of ATR. Ding and colleagues used 9-ING-41 to demonstrate these results which is significant as 9-ING-41 is currently being studied in clinical trials and will be detailed in a later section. In keeping with its effect on the ATR DNA damage response pathway, 9-ING-41 demonstrated a strong cell cycle arrest inducing effect in vitro in other studies [39][40][41][42].

9-ING-41 is currently being studied in a phase Ib/II basket trial of treatment-refractory advanced solid tumors or hematologic malignancies (NCT03678883, Actuate 1801). The interim results of the study were presented at the 2020 American Society of Clinical Oncology Virtual Annual Conference. The study is composed of parts 1 and 2 which assess safety and dose-limiting toxicities, as well as the recommended phase II dose for 9-ING-41 monotherapy (part 1) or in combination with chemotherapy (part 2). Part 3 is studying clinical activity of 9-ING-41 in combination with chemotherapy. At the time of data cutoff, a total of 155 patients were evaluable including 42 patients with PDAC who had received more than 1 dose of study drug (Figure 1) [43]. 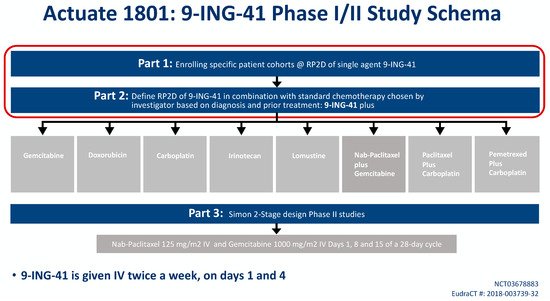 Figure 1. Trial design of the Actuate 1801 trial. The objectives of the ongoing Part 1 and Part 2 are to determine the recommended phase II dose (RP2D) of 9-ING-41 with and without chemotherapy, respectively. The choice of the chemotherapy agent will be chosen by the investigator and depend on the diagnosis and prior treatment. Part 3 will be a Simon 2-stage phase II design which is an expansion cohort that will open based on the results of Part 1 and 2. It will evaluate 9-ING-41 with gemcitabine with nab-paclitaxel in advanced pancreatic ductal cancer (PDAC) for first-line therapy.

Immunotherapy has shifted the paradigm of anti-cancer treatment in solid tumors. Namely, immune checkpoint inhibitors targeting the programmed death-1 and programmed death ligand-1 (PD-1/PD-L1) pathway have become part of the standard of care treatment in various cancers including melanoma, non-small cell lung cancer [44][45][46][47][48]. Immune checkpoint inhibitors have demonstrated largely disappointing results in PDAC patients thus far. For example, the Canadian PA.7 trial compared durvalumab (anti-PD-L1) and tremelimumab (anti-CTLA-4) with chemotherapy versus chemotherapy alone in first-line metastatic PDAC in a phase II setting. The study showed no significant difference in the primary endpoint of OS as well as the secondary endpoints of PFS and ORR [49]. The immune suppressive tumor microenvironment along with extensive desmoplasia of pancreatic tumors have resulted in this poor responsiveness to immunotherapy [50][51]. Novel combination therapeutic approaches aimed at re-invigorating the tumor microenvironment such that it is favorable for the elicitation of anti-tumor immune responses are needed to overcome such treatment barriers to immunotherapy.