The ear and brain work together in the hearing process. Sound energy in the audible frequency range (20 Hz–20 kHz) propagates through air medium as an acoustical mechanical wave which enters from the outer ear towards the middle ear to vibrate the eardrum.

The ear and brain work together in the hearing process. Sound energy in the audible frequency range (20 Hz–20 kHz) propagates through air medium as an acoustical mechanical wave which enters from the outer ear towards the middle ear to vibrate the eardrum. In a healthy cochlea, the eardrum vibrates the small bones called the ossicles (malleus, incus and stapes) and the sound vibrations travel to the cochlea which resides in the inner ear. The basilar membrane (BM) in the cochlea mechanically filters sound while the hair cells turn BM vibrations into electrical nerve impulses. In this mechanoelectrical transduction, BM vibrations displace hair cells (stereocilia) resulting in the gating of ion channels and generating bioelectrical potentials. The auditory nerves are stimulated and the brain would interpret the information received from the generated nerve impulses.
There are three main types of hearing loss that can either affect one or both ears. Conductive hearing loss occurs when the outer ear and middle ear could not become the transmission mediums to conduct sound properly. People with severe outer or middle ear malformation and chronic ear infection may experience conductive hearing loss. The sensorineural hearing loss happens due to missing or damaged hair cells in the inner ear that lead to frequency selectivity and sensitivity disorders. Mixed hearing loss is the combination of both conductive and sensorineural hearing losses, a result associated with issues related to both outer/middle ear and inner ear. Different types of hearing devices like cochlear implant (CI) and middle ear implant (MEI) have been developed to cater to different types of hearing problems. Hearing device usage significantly improves the social, psychological, emotional and physical aspects of life for hearing impaired persons.
CI is the most successful neural prosthesis to date with a mature technology in biomedical device implantation. It mainly treats patients with severe to profound sensorineural hearing loss. Figure 1a displays the externally worn audio processor (2) with a battery pack behind the ear and a microphone (1) hooked onto the ear [1]. The microphone transduces acoustic waves from the environment into electrical signals before feeding them into the processor. Bank of filters in the processor decompose the electrical sound signals digitally into different frequency bands/components and implement certain specific processing strategies to extract the right features from the detected sound. The signals are encoded into radio frequency (RF) electrical signals. RF transmitter coil (3) is positioned in place and aligned to the RF receiver coil (4) by a magnet. The coded signals are transmitted to the receiver coil implanted under the skin from the transmitter coil via transcutaneous magnetic induction mechanism. The hermetically sealed implanted stimulator circuit (4) derives power from the RF signal and translates the coded signals into electrical pulses. A conductor link (5) threaded into the cochlea and the multichannel stimulation electrodes (6) at the end of the conductor link connect to the hearing nerves. The electrical pulses are transmitted from the stimulator to the stimulation electrode array inserted in the cochlea via the conductor link and directly stimulate the auditory nerves. All of these processes are supported by a battery, supplying each component of the CI with power [1][2]. 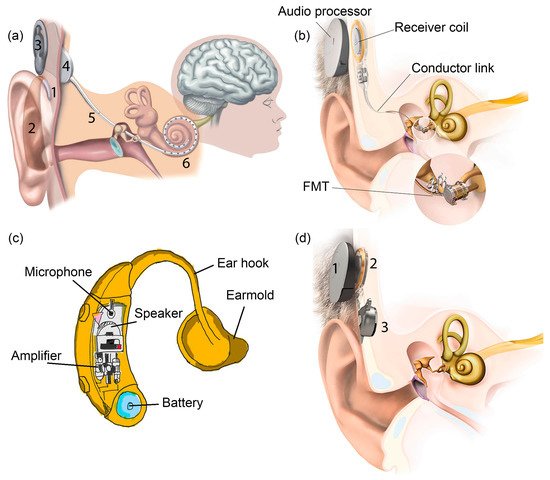 Generally, an implanted medical device is used for sensing or stimulating by which it serves as a diagnostic tool or is used for treatment practices. A patient who is suffering from neural system disorder uses implantable stimulators [25], Parkinson’s symptoms can be eased via deep brain stimulators [26] and a hearing impaired person uses a cochlear implant for hearing restoration [27]. These medical implants, including cardiac pacemakers, retinal implants and infusion pumps, are considered small-sized and low-powered electronic devices. The electrochemical battery to power up these devices needs periodic recharging or has a limited lifetime that requires replacement. The implanted lithium battery for a pacemaker, neurostimulator and insulin infusion pump needs to be replaced every ~6.5 years, ~4 years and ~2 years on average, respectively [28][29]. The implanted battery for a MEI can stay for ~6 years while an external worn battery has to be charged every week [5][30]. Higher energy usage will reduce the lifespan of an implant’s battery and its small energy storage requires frequent charging. The removal and replacement of an implanted battery requires surgery that could pose risks to the well-being and health of the patients. The risks of infection, bleeding, inflammation, long healing process and additional cost have called for the development of self-powered medical implants to reduce these physical, psychological and financial burdens on users. Self-sustainable energy generation may perhaps ensure the longevity of the implanted medical devices.

Energy harvesting can extend the working life of electronics. Battery contributes an unwanted weight and volume in a biomedical system. A battery that can last longer presages an increase of size and weight of the implanted devices. Therefore, an energy harvester is essential in the manufacturing of medical implants. There are various accessible energy sources like solar, heat, electromagnetic radiation, ultrasonic waves, fluid flow and vibration which could be used to generate electrical signals. From these sources, there are different types of transduction mechanisms that can be implemented in implanted biomedical devices like piezoelectricity (mechanical strain), electromagnetism (magnetic induction), electrostaticity (capacitance), thermoelectricity (temperature gradient), triboelectricity (frictional contact and electrostaticity) and pyroelectricity (thermal fluctuation). Two energy harvesting concepts are coined, either from the environmental source or human body.
Energy sources from the outside of a human body can be utilised by the implanted energy harvesters to generate electrical energy. Wireless energy transfer is a reliable and convenient through-skin energy transmission method to charge up the implanted biomedical device or energy storage device without additional surgery [25]. Reported here are few examples of implantable wireless energy harvesters that a hearing device could adopt for its own fully implanted system. In [31], electromagnetic induction has been used to power up a pacemaker. A human body is proposed to be placed in a low frequency rotating magnetic field that triggers the implanted microgenerator (Figure 2a). Two phase excitation coils are set up outside of a human body while the microgenerator, metal magnet and high-ratio gear are implanted inside. A rotating magnetic field is applied onto the implanted magnet causing it to rotate. High-ratio gear increases magnet rotation and drives the microgenerator to generate high voltage. The system produces small eddy current due to low frequency excitation and thus it is safe to be implemented in a human. They estimate that 4 W of power is needed to be generated from the system to fully charge a pacemaker for 3 h. 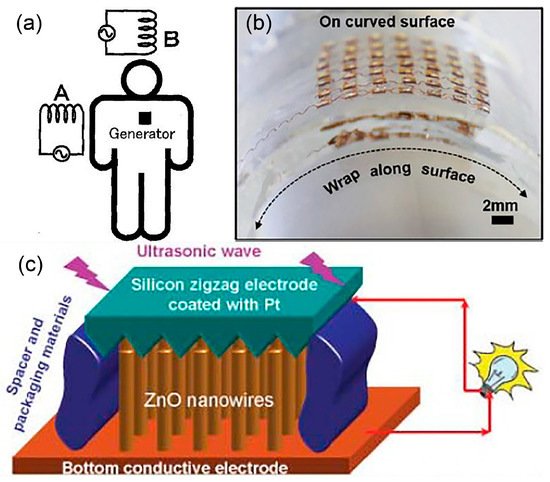