p-Coumaric acid is a natural metabolite contained in many edible plants, and its antioxidant activities in reducing oxidative stress and inflammatory reactions have been demonstrated in various experimental models. p-Coumaric acid has an optimal structure to be a competitive inhibitor of tyrosinase that catalyzes key reactions in the melanin biosynthetic pathway. Experimental evidence supports this notion as it was found to be a more potent inhibitor of tyrosinase, especially toward human enzymes, than other well-known tyrosinase inhibitors such as arbutin and kojic acid. p-Coumaric acid inhibited melanin synthesis in murine melanoma cells, human epidermal melanocytes, and 3-dimensionally reconstituted human skin models. Ex vivo skin permeation experiments and in vivo efficacy tests for p-coumaric acid confirmed its efficient transdermal delivery and functional efficacy in reducing erythema development and skin pigmentation due to ultraviolet exposure. Human studies further supported its effectiveness in hypopigmentation and depigmentation. These findings suggest that p-coumaric acid has good potential to be used as a skin-lightening active ingredient in cosmetics.

p-Coumaric acid (4-hydroxycinnamic acid) is a phytochemical with multiple health benefits [1][2]. Its chemical structure is very similar to that of L-tyrosine, the natural substrate of tyrosinase involved in the cellular melanogenesis in melanocytes. Recently, p-coumaric acid was found to be a potent and selective inhibitor of human tyrosinase [3]. Its antimelanogenic effects have been demonstrated in various experimental settings including human studies [4]. Considering the need for natural skin lightening agents in cosmetics, it is of interest to scrutinize recent literature on the biological activities of p-coumaric acid. This review focused on the antimelanogenic properties of p-coumaric acid to extensively examine its potential as an active ingredient in cosmetics.

A variety of phenolic compounds found in the plant kingdom are a group of natural antioxidants with potential benefits to human health and beauty [1][2][5]. Phenolic compounds with reducing power and free radical scavenger activity may be helpful in prevention or alleviation of many chronic diseases caused by oxidative stress [6][7]. Coumaric acids are derivatives of cinnamic acid mono-hydroxylated at the phenyl group, and p-coumaric acid is the most abundant isoform. p‐Coumaric acid is found at significant levels in many fruits, vegetables, and cereals [8][9].

It is stated that p-coumaric acid is a relatively potent antioxidant, and a scavenger of reactive oxygen species (ROS) and free radicals [10][11]. Its antioxidant activity has been demonstrated in cultured endothelial cells exposed to high glucose and free fatty acid [12], in keratinocytes exposed to UV [13], and in lens epithelial cells exposed to hydrogen peroxide [14]. It also shows antimicrobial activity by disrupting bacterial cell membranes and intercalating the groove in bacterial genomic DNA [8][15]. Polymeric preparations containing p-coumaric acid showed antioxidant and antimicrobial properties, aiding in the regeneration process of wounded skin [16][17].

p-Coumaric acid showed antiinflammatory effects in adjuvant-induced arthritic rats, reducing the levels of tumor necrosis factor-alpha (TNF-a) and macrophage phagocytic index, while increasing serum immunoglobulin levels [20]. It further attenuated hepatotoxicity due to alcohol or acetaminophen [21][22], pulmonary inflammation due to lipopolysaccharide or cigarette smoke [5][23], and cardiotoxicity due to arsenite or doxorubicin [24][25].

In 1999, p-coumaric acid was identified as an active constituent of ginseng leaves that inhibited mushroom tyrosinase activity in vitro [32]. In later studies, dimeric coumaroyl amides such as N,N'-di-p-coumaroyl-1,3-diaminopropane and N,N'-di-p-coumaroyl-1,3-diaminoethane inhibited mushroom tyrosinase activity as compared to dimeric feruloyl amide derivatives [33][34][35].

On the basis of enzyme kinetics studies, p-coumaric acid was classified as a mixed type or competitive inhibitor of human tyrosinase depending on the substrates used- L-tyrosine or L-DOPA [3]. Given the structural resemblance to endogenous substrate L-tyrosine, p-coumaric acid might bind to and block the active site of the enzyme, preventing access to its substrates.

Although there are minor inconsistencies among study results, most evidence supports that p-coumaric acid can attenuate cellular melanogenesis. Indeed, the antimelanogenic effects of p-coumaric acid have been verified in later studies using human epidermal melanocytes [3, 36], and 3-dimensional human skin equivalents [42].

p-Coumaric acid did not significantly decrease the melanin levels of “unstimulated” B16/F10 cells [33][37], but its inhibitory effects on cellular melanogenesis was clearly observed in cells in the presence of a-MSH stimulation [41]. This may indicate that p-coumaric acid prevents “stimulated” new melanin synthesis rather than decreasing preexisting melanin.

7. In vivo or Clinical Studies on the Hypopigmentation Efficacy of p-Coumaric Acid

When a cream containing 1.5% p-coumaric acid was applied on the skin of SKH‐1 hairless mice, it attenuated UV-induced inflammatory responses as monitored by skin thickness and skin redness, compared to the animals treated with a control cream [50]. The effects of p-coumaric acid cream on UV-induced skin pigmentation were also examined in Hos:HRM-2 melanin-possessing hairless mice [47]. UV exposure of mice increased the a* values and decreased L* values, representing erythema and skin lightness, respectively. The UV-induced changes in a* and L* values were significantly reduced in mice pretreated with creams containing 1.5% p-coumaric acid or methyl p-coumarate than those pretreated with control cream.

Urocanic acid is biosynthesized from L-histidine by the action of L-histidine ammonia lyase (also called histidase) and it is found as a major acid-soluble, UV-absorbing compound in the stratum corneum [55][56]. Urocanic acid is considered as a “natural sunscreen” having controversial effects on skin health [57-59]. p-Coumaric acid is similar to urocanic acid, in that it is synthesized from L-tyrosine, another aromatic amino acid, in a reaction catalyzed by L-tyrosine ammonia lyase in prokaryotes, plants, and animals [60][61]. p-Coumaric acid rescued the viability of HaCaT keratinocytes exposed to UV as effectively as urocanic acid in vitro [50]. Topical application of p-coumaric acid onto the dorsal skin of Hos:HRM-2 melanin-possessing hairless mice or SKH-1 hairless mice attenuated the inflammatory erythema responses caused by UV [47][50]. Pre-application of p-coumaric acid on human skin attenuated erythema due to UV exposure [4].

In conclusion, p-coumaric acid has a unique chemical structure, and many of its biochemical properties are suitable for its use as a skin lightening cosmetic ingredient. p-Coumaric acid inhibited the catalytic activity of tyrosinase in vitro, especially toward human tyrosinase, more effectively than other structurally similar compounds, especially when L-tyrosine was used as the substrate. p-Coumaric acid inhibited tyrosinase gene expression stimulated by a-MSH. Antimelanogenic effects of p-coumaric acid were observed in murine melanoma cells, human epidermal melanocytes, and 3-dimensional human skin equivalents. p-Coumaric acid also attenuated UV-induced cytotoxicity. Its skin permeability and hypopigmenting effects were shown in ex vivo and in vivo experiments, respectively. The clinical outcome from human studies was also supportive for the efficacy of p-coumaric acid attenuating UV-induced inflammation and subsequent pigmentation. Therefore, the antimelanogenic effects of p-coumaric acid in the UV-exposed skin is considered to involve multiple mechanisms: (1) absorption of UV, (2) inhibition of new synthesis of tyrosinase, and (3) inhibition of catalytic activity of preexisting tyrosinase (Figure 1). 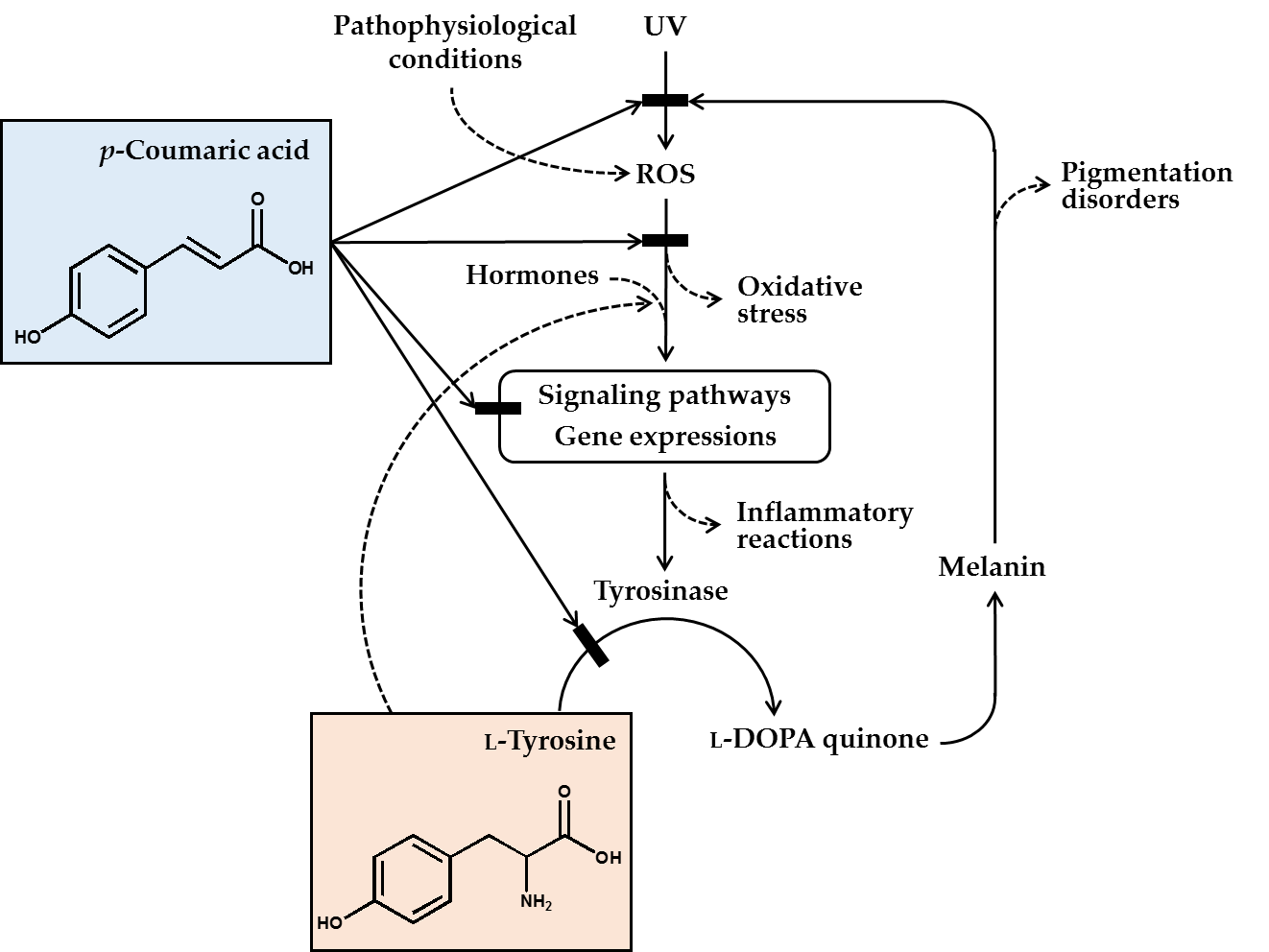 Figure 1. p-Coumaric acid can attenuate skin hyperpigmentation through multiple mechanisms. UV and other pathophysiological conditions stimulate the production of reactive oxygen species (ROS) and multiple signaling pathways leading to enhanced gene expression of tyrosinase and increased melanin synthesis. The melanin can absorb ultraviolet (UV) radiation and alleviate oxidative stress and inflammatory reactions caused by UV radiation, but the melanin deposition may cause skin pigmentation disorders. p-Coumaric acid has a chemical structure similar to L-tyrosine and inhibits the activity of tyrosinase, which catalyzes the oxidation of L-tyrosine and/or L-DOPA to L-DOPA quinone in the melanin biosynthetic pathway. Due to its UV absorption and antioxidant action, p-coumaric acid can inhibit the signaling pathways linked to gene expression of tyrosinase and inflammatory mediators. p-Coumaric acid can also reduce the stimulatory effects of hormones and L-tyrosine on the gene expression of tyrosinase. Thus, it is proposed that p-coumaric acid has advantageous biochemical properties suitable for use as a skin-lightening active ingredient in cosmetics.