Phthalic acid esters (PAEs) are a class of lipophilic chemicals widely used as plasticizers and additives to improve various products’ mechanical extensibility and flexibility. At present, synthesized PAEs, which are considered to cause potential hazards to ecosystem functioning and public health, have been easily detected in the atmosphere, water, soil, and sediments; PAEs are also frequently discovered in plant and microorganism sources, suggesting the possibility that they might be biosynthesized in nature.

1. Physicochemical Properties and Applications of PAEs

Phthalic acid esters (dialkyl or alkyl aryl esters of 1,2-benzenedicarboxylic acid), usually called PAEs, phthalate esters, or just phthalates, are a group of important derivatives of phthalic acids which are synthesized from phthalic anhydride and specific alcohols by Fischer esterification [1][2]. PAEs based on hydrogen bond and van der Waals force interconnection are hydrophobic compounds with log Kow ranging from 1.6 to 12 [3]. Most of the phthalate esters are colorless liquids with a low volatility, high boiling point, and poor solubility in water, but they are soluble in organic solvents and oils [4]. These esters’ general chemical structure consists of a rigid planar aromatic ring and two malleable nonlinear fatty side chains. The two side-chain groups can be the same or not, and there are approximately 30 types of different side chains, ranging from dimethyl phthalate to tridecyl ester [5]. Due to phthalate esters being widespread in the biosphere and potential hazards in relation to ecosystem functioning and public health, six PAEs have been listed as priority pollutants by the United States Environmental Protection Agency and the European Union [3][6], including dimethyl phthalate, diethyl phthalate, di-n-butyl phthalate, butyl benzyl phthalate, di(2-ethylhexyl) phthalate, and di-n-octyl phthalate. These phthalate esters’ physicochemical properties and common applications are summarized in Table 1 and Figure 1.

Figure 1. The application of six PAEs listed as priority pollutants.

Higher phthalate molecules, such as di(2-ethylhexyl) phthalate, diisononyl phthalate, and butyl benzyl phthalate, have a wide range of applications as plasticizers in the polymer industry to improve flexibility, workability, and general handling properties, and about 80% of PAEs are used for this purpose [3][10]. The stability, fluidity and low volatility of these compounds make them very suitable for manufacturing PVC and other resins, such as polyvinyl acetates and polyurethanes [11]. One of the most widespread phthalate plasticizers, di(2-ethylhexyl) phthalate, has several useful applications in numerous consumer products, commodities, and building materials [12]. Diisononyl phthalate is commonly used in garden hoses, pool liners, flooring tiles, tarps, and toys. Additionally, butyl benzyl phthalate, as a component of materials, is extensively used in vinyl flooring, synthetic leather, inks, and adhesives [2]. Phthalates are not covalently bound to the polymer matrix, rather they usually remain present as a freely mobile and leachable phase; therefore, they can be lost from soft plastic over time and released to the environment during production and manufacture. Not surprisingly, phthalates can often be found in freshwater lakes and oceans [13][14], urban and suburban soil [15][16], the atmosphere [17][18], and sediments [19][20]. Bu et al. (2020) [21] summarized the concentrations of six representative phthalates from published papers in the last twenty years (2000–2019) to analyze the pollution characteristics of phthalates worldwide and found that their mean concentration in settled dust was 500.02 μg/g in North America, 580.12 μg/g in Europe, and 945.45 μg/g in Asia, with DEHP being the most predominant phthalate, with mean and median values of 615.78 μg/g and 394.03 μg/g, respectively; the mean concentration of six representative phthalates in indoor air was 598.14 ng/m3 in North America, 823.98 ng/m3 in Europe, and 1710.26 ng/m3 in Asia. In another study, Hu et al. (2020) [22] detected 8 PAEs in 67 sediment samples collected from Hangzhou Bay, Taizhou Bay, and Wenzhou Bay in China; the total concentrations of detected PAEs were in the range of 654–2603 ng/g, with di(2-ethylhexyl) phthalate being the predominant PAE (mean 663 ng/g, accounting for a mean of 52% of total PAEs).

Allelopathy refers to any direct or indirect harmful or beneficial effect exerted by one plant on another through the production of chemical compounds that are released into the environment. In some cases, allelopathy is suspected to contribute to the establishment of dominance of certain plant species, including some invasive alien species. Due to the phytotoxic property of allelochemicals, they are often considered valuable candidates for environmentally friendly bioherbicies [28][29]. Di-n-octyl phthalate isolated from Fimbristylis miliacea can remarkably inhibit the seed germination of tested weed species Ludwigia hysopifolia, Echinochloa colonum, Cyperus iria, and Paspalam digitatum [30]. Zhu et al. (2014) [31] isolated two allelochemicals, di(2-ethylhexyl) phthalate and di-n-butyl phthalate, from the root exudates of the invasive plant, Ageratina adenophora. In a bioassay, di-n-butyl phthalate was found to possess a significant inhibitory effect on seed germination and seedling growth of A. adenophora. Meanwhile, these two compounds significantly increased the superoxide dismutase (SOD) activity of A. adenophora’s leaves and caused lipid peroxidation and cell membrane damage. Xuan et al. (2006) [32] identified the derivatives of phthalic acids from root exudates of Echinochloa crusgalli and found that diethyl phthalate strongly affects the seedling growth of alfalfa, Indian jointvetch, lettuce, monochorea, and sesame. Huang et al. (2017) [33] analyzed the extracts of aerial parts plants, root exudates, and plant rhizosphere soil of Chrysanthemum indicum to determine the effect of the allelochemical diethyl phthalate, and the results show that it has a noticeable impact on promoting the fresh weight of lettuce, as well as the root growth of lettuce and rape. Shanab et al. (2010) [34] extracted four phthalate derivatives from Eichhornia crassipes, including di-n-octyl phthalate, mono (2-ethylhexyl) phthalate, methyl dioctyl phthalate, and diisooctyl phthalateis, which possess strong inhibitory effects on Chlorella vulgaris.

Physiological studies have indicated that PAEs can influence enzyme activity, which might be at least one of their phytotoxicity mechanisms. Deng et al. (2017) [35] revealed that as the concentration of PAEs secreted by tobacco roots increased, the rate of production of superoxide anion radicals, the concentration of malondialdehyde, and the activity of peroxidase and SOD in tobacco root increased significantly. A series of changes could reduce the root system’s antioxidant properties and cause oxidative damage to the apical cell membrane system, thereby affecting root absorption and ultimately showing autotoxicity. Dong et al. (2016) [36] extracted diisobutyl phthalate and di-n-butyl phthalate from the ethyl acetate extract of C. fracta, both of which show a strong inhibitory effect on the growth of Heterosigma akashiwo and Gymnodinium breve, which may be related to the production of reactive oxygen species (ROS) induced by diisobutyl phthalate and di-n-butyl phthalate in algal cells. Excessive ROS inhibits the activities of catalase and SOD, leading to lipid oxidation and the destruction of algae cell membranes.

Natural products, including secondary metabolites produced by plants and microorganisms, have long been studied for their antimicrobial activity in the search for eco-friendly substitutes for synthesized chemicals [37]. Di(2-ethylhexyl) phthalate and di-n-butyl phthalate isolated from B. mcbrellneri show broad-spectrum antibacterial activity [38]. Di(2-ethylhexyl) phthalate can inhibit the growth of gram-positive (S. epidermidis, MIC of 9.37 µg/mL; S. aureus, MIC of 18.75 µg/mL) and gram-negative bacteria (E. coli, MIC of 37.5 µg/mL; P. aeruginosa and Klebsiella pneumoniae, MIC at 75 µg/mL for both). Di-n-butyl phthalate also inhibits the growth of gram-positive (Bacillus subtilis and S. epidermidis, MIC at 18.75 µg/mL for both) as well as gram-negative bacteria (E. coli and P. aeroginosa, MIC at 37.5 µg/mL for both). Di(2-ethylhexyl) phthalate isolated from the flowers of Calotropis gigantean exerts antimicrobial activity against B. subtilis with a MIC of 32 µg/mL [39]. There are also reports on the antimicrobial activity of di-n-butyl phthalate isolated from Streptomyces albidoflavus showing a MIC for E. coli of 53 µg/mL, with B. subtilis at 84 µg/mL [40]. Four phthalate derivatives isolated from E. crassipes also exert significant antibacterial activity against gram-positive bacteria (B. subtilis and Streptococcus faecalis) and gram-negative bacteria E. coli, and antifungal activity against Candida albicans [34]. In another study, El-Mehalawy et al. (2008) [41] found that di(2-ethylhexyl) phthalate could be produced by certain bacteria, including Tsukamurella inchonensis, Corynebacterium nitrilophilus, and Cellulosimicrbium cellulans, and di(2-ethylhexyl) phthalate has the function to inhibit fungal spore germination, cell membrane growth, and the production of total lipids and total protein. Li et al. (2021) [42] isolated di-n-butyl phthalate from a new marine Streptomyces sp. and found this compound significantly inhibited spore germination and mycelial growth of Colletotrichum fragariae. In addition to this, an obvious decrease was detected in sugar and protein contents of C. fragariae mycelia. Other studies have shown similar results. For instance, di-n-butyl phthalate was reported to inhibit spore germination and mycelium growth of Colletotrichum gloeosporioides, Colletotrichum musae, and Gaeumannomyces graminis [43][44][45].

Janu and Jayanthy (2014) found that diethyl phthalate derived from the fungus Aspergillus sp. increased the superoxide production and exerted ROS generated oxidative stress in the cytoplasm of bacterial cells, which eventually led to cell death [46]. In addition, diethyl phthalate with antimicrobial properties was reported for its ability to interfere with quorum sensing mediated virulence factors and biofilm formation in Pseudomonas aeruginosa [47][48]. Another study demonstrated that dimethyl phthalate (concentration ranged from 20 to 40 mg/L) greatly inhibited the growth and glucose utilization of Pseudomonas fluorescens, meanwhile the surface hydrophobicity and membrane permeability of P. fluorescens were also increased. Dimethyl phthalate could lead to deformation of the cell membrane and misopening of membrane channels. Additionally, RNA-Seq and RT-qPCR results revealed that the expression of some genes in P. fluorescens were altered, including the genes involved in energy metabolism, ATP-binding cassette transporting, and two-component systems by dimethyl phthalate [49].

In addition to their phytotoxic and antimicrobial activity, PAEs were also found to be insecticidal; attributed to inhibition of acetylcholinesterase enzyme activity, they possess significant mosquito larvicidal activity. Therefore, some phthalates, such as synthetic diethyl phthalate and dimethyl phthalate, have been used as active ingredients in insect repellents [50][51]. Previously, Adsul et al. (2012) [52] isolated di-n-butyl phthalate from the leaf extract of Ipomoea carnea via column chromatography, and this compound ws found to be lethal to the fourth instar larvae of Aedes aegypti and Culex quinquefasciatus, with the lethal concentrations of LC50 being 81.43 and 109.64 ppm, respectively. Di-n-butyl phthalate and di(2-ethylhexyl) phthalate were isolated from the bacterium B. mcbrellneri; because of their significant acetylcholinesterase inhibitory activity, they are also active against the fourth instar of A. aegypti after 24 h of exposure [38]. On the other hand, various PAEs were also constantly reported as possessing other biological activities, such as anti-inflammatory, antiviral, anti-tumor, antidiabetic activity, etc., indicating their valuable potential to be explored further in capacities other than plasticizers [53] (Figure 2). 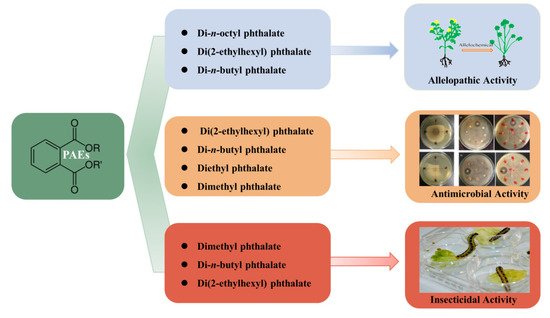