Cocaine- and amphetamine-regulated transcript (CART) is a peptide suggested to play a role in gastrointestinal tract tissue reaction to pathology. Gastric ulceration is a common disorder affecting huge number of people, and additionally, it contributes to the loss of pig livestock production. Importantly, ulceration as a focal disruption affecting deeper layers of the stomach wall differs from other gastrointestinal pathologies and should be studied individually. The pig’s gastrointestinal tract, due to its many similarities to the human counterpart, provides a valuable experimental model for studying digestive system pathologies. To date, the role of CART in gastric ulceration and the expression of the gene encoding CART in porcine gastrointestinal tube are completely unknown.

Cocaine- and amphetamine-regulated transcript (CART), a relatively recently discovered peptide, is being recognized as a substance playing an important role in the peripheral nervous system and is known to be expressed in nerves supplying various organs, especially the digestive tract. Importantly, its role in tissue reaction to pathological circumstances has been also observed, indicating its potential role in adaptive changes of tissues to pathology. Neuronal tissue is known to possess a special ability to respond to a pathological factor, which is referred to as ‘neuronal plasticity’. Stomach, as a part of the digestive tract, is widely innervated by extrinsic and intrinsic nerves, and the later form a complicated and highly autonomic enteric nervous system [1]. Multiple experiments have revealed the reaction of enteric neurons to pathology, which was manifested by changes in expression of different neuropeptides by intrinsic nerve cells [2]. It should be stressed, that gastrointestinal tissue and nerve reactions are highly specific and strongly dependent on the influencing factor and the part of the intestinal tube [1][2]. Importantly, CART-dependent reaction to pathology was studied in the intestinal tissues [3][4][5][6][7][8][9][10], while only occasional studies dealt with gastric tissues. The only available studies verified the changes in CART-immunoreactive stomach neurons during experimentally induced diabetes mellitus type I [11], intoxication with T2 toxin [12], acrylamide [13], and bisphenol a [14] supplementation, which are all multi-system pathologies affecting variety of tissues. Thus, such results should be related to complex multi-system reactions, but not the pathologies typically associated with the stomach. Our previous experiments have clearly shown that gastric ulcers strongly affected the enteric nervous system in the stomach wall [15][16][17][18] and these complex changes differed in several respects from other gastrointestinal pathologies. Importantly, ulcers in the distal part of the stomach (pyloric antrum) affect the gastric emptying [19][20] leading to maldigestion, malabsorption, and malnutrition. These specific symptoms were even referred to as “pyloric syndrome complex” [21].
Since gastric ulcerations affect a huge number of people around the world and, in addition, significantly contribute to the loss of pig livestock production [22][23], they represent a serious problem in human and animal medicine. Moreover, the pig—as an omnivorous animal with many embryological, histological, and functional similarities to humans—is considered as the best animal model for biomedical studies on gastrointestinal tract [24][25][26]. Therefore, the basic science knowledge on substances involved in the regulation of porcine gastric ulcer disease is highly valuable for the future experiments. Thus, in the present experiment we aimed to verify by double immunofluorescence and confocal microscopy whether CART is involved in the stomach enteric nerve’s reaction to the gastric antrum ulceration in tissues adjacent to the pathological focus. Importantly, tissue reaction to pathology may be additionally manifested by changes in the expression of genes encoding various substances, and such genetic reaction is of key importance in tissue adaptive changes. The first demonstration of CART mRNA in gastrointestinal tissues was difficult to obtain even in laboratory rodents [27][28]. To date, no study has described the expression of CART encoding gene in the swine gastrointestinal tract tissues, and neither experiment verified its expression changes under pathological processes occurring in the pig gastrointestinal tube. Therefore, our second scientific aim was to demonstrate the expression of gene encoding CART in the porcine stomach tissues and verify the changes in its expression under stomach ulcerations using Q-PCR technique (in tissues strictly corresponding with samples tested by immunofluorescence).

2. CART-Immunofluorescence in the Structures of Enteric Nervous System

Microscopic analysis revealed that in all studied animals CART-immunofluorescence was observed mainly in the myenteric perikarya (Figure 1A–D) and nerve fibers located within muscular layer (Figure 1E,G), while only occasional irregularly arranged submucosal perikarya were noticed in a few individuals of both animal groups (Figure 2A–D) and no difference in their occurrence and number was noticed. 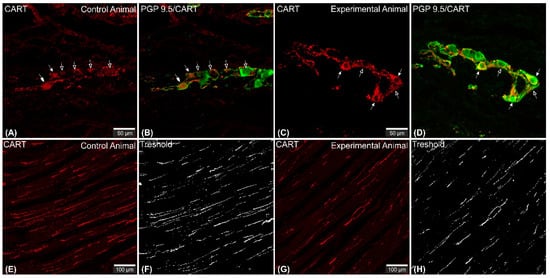 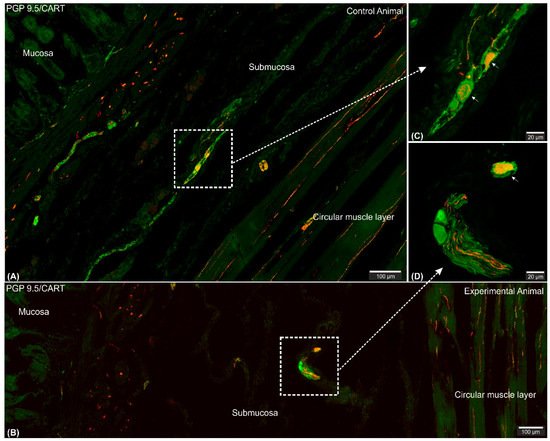 CART-immunoreactive perikarya constituted 39.98 ± 1.24% of myenteric cells in control animals, while in ulcer pigs this number decreased to 34.9 ± 0.48%, and observed difference was statistically significant (Figure 3). In both animal groups most of the PGP 9.5/CART-immunofluorescent myenteric perikarya were oval or multipolar in shape, however they differed in dimensions and fluorescence intensity (Figure 1A–D and Figure 4A–D). 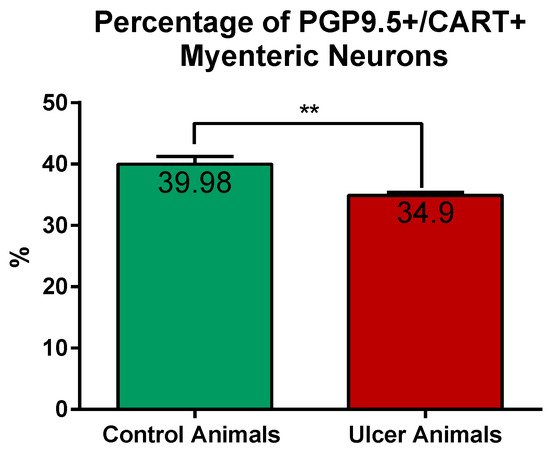 Figure 3. Graph showing the percentage of PGP 9.5/CART double immunofluorescent myenteric perikarya in the control and experimental animals. The number of cells was significantly reduced in ulcer animals. (**) p value = 0.0087. 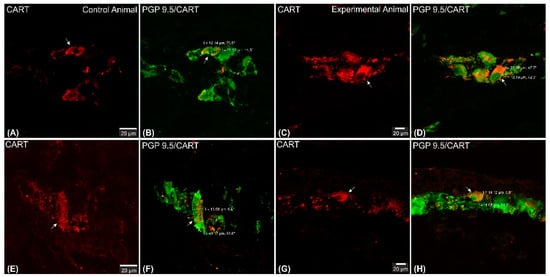 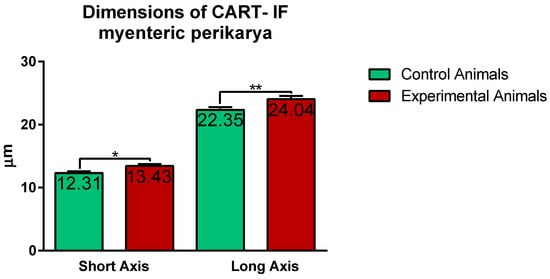 Figure 5. Graph showing the average dimensions (long and short axis) of myenteric perikarya in the control and experimental animals. Both dimensions were increased in ulcer animals. (*) p value = 0.0226; (**) p value = 0.0044.
ImageJ software analysis revealed that in the control pigs average CART-immunofluorescence intensity of myenteric perikarya amounted to 77.25 ± 1.88 units, while in ulcer animals it significantly increased, up to 89.11 ± 3.1 units (Figure 6). 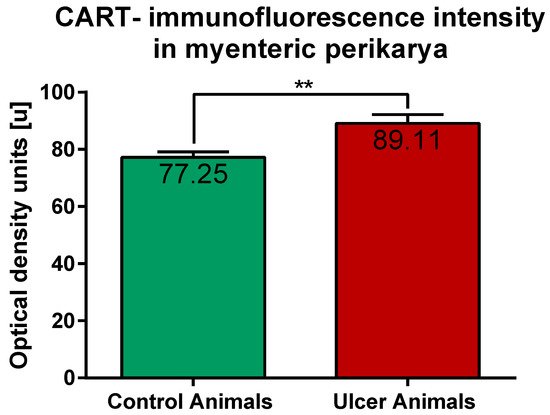 CART-immunoreactive nerve fibers run mostly parallel to muscle fibers. Most numerous CART-immunoreactive nerve fibers were observed within the circular muscle layer. They were characterized by medium to strong immunofluorescence and penetrated the full thickness of the layer (Figure 1E,G). ImageJ software analysis of the surface area occupied by CART- fluorescent fibers located in the circular muscular layer (Figure 1F,H) revealed its statistically significant decrease from 1.14 ± 0.08% in control animals to 0.83 ± 0.06% in experimental pigs (Figure 7). 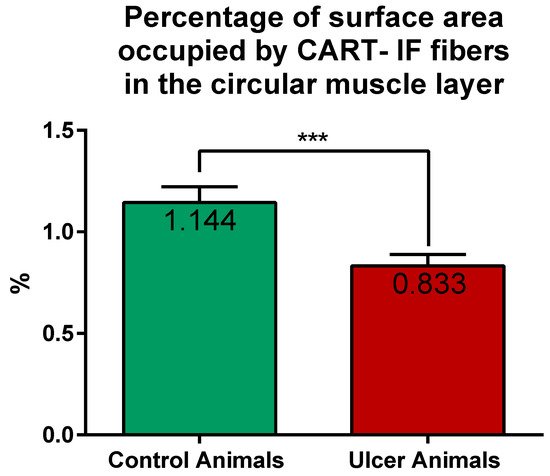 Figure 7. Graph showing the percentage of surface area (in the field of view) occupied by CART-immunofluorescent nerve fibers located in the circular muscle layer in the control and ulcer pigs. The value decreased in animals with ulcers. (***) p value = 0.0006.
In the longitudinal muscle layer, the section thickness of which showed significant differences between different parts of the same specimen, examined nerve fibers were evenly scattered within the layer and no differences in their occurrence were noticed between control and experimental animals (Figure 8A,B). 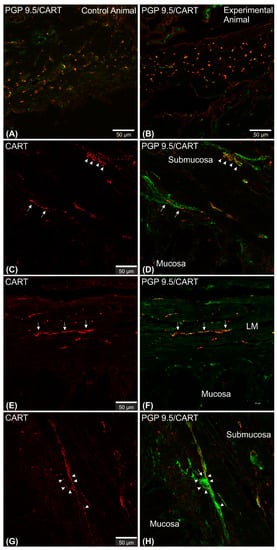 2.3. Expression of mRNA Encoding CART in the Stomach Wall

Results of the Q-PCR revealed the expression of gene encoding CART in the stomach tissues of the control and experimental pigs. Statistical analysis of its relative expression (in relation to GAPDH as a housekeeping gene) revealed its significant decrease in stomachs of ulcer animals, in relation to control pigs (Figure 9). 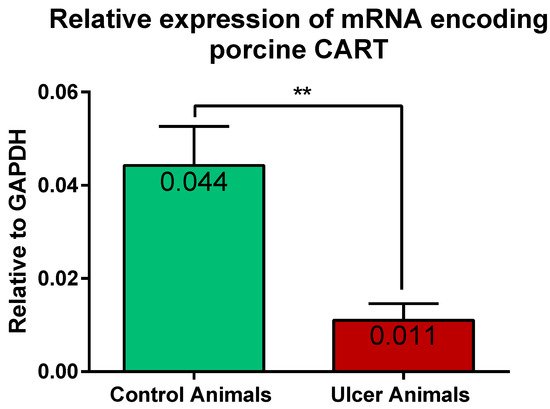 Figure 9. Graph showing the expression level of mRNA encoding CART in the stomach antrum tissues of the control and ulcer pigs. The stomach antrum circular-shaped samples (directly adjacent to the ulcer verge in experimental animals; at the strictly equivalent location in control animals) were cut transversally to the gastric wall and comprised all its layers. The data obtained from each sample were normalized to GAPDH. Relative quantities (RQ) of mRNA were analyzed using the comparative Ct method. (**) p value = 0.0043.

Our experiment has revealed for the first time that gastric ulceration influenced the CART-dependent intrinsic nerve and tissue reaction. Surprisingly, in the stomach wall adjacent to the ulcer focus the number of CART-immunoreactive myenteric perikarya and the expression of CART-IF in nerve fibers penetrating the muscular circle layer were significantly reduced. Moreover, the dimensions and intensity of CART-fluorescence was changed in myenteric perikarya of ulcer animals. In line, the expression of firstly demonstrated CART encoding mRNA was reduced in studied tissues of ulcer pigs. Perikarya of the submucosal ganglia and neuronal fibers located in the longitudinal muscle layer and submucosa were not engaged in CART reaction to stomach ulcerations.
CART-immunoreactive nerve structures are widely distributed within the enteric nervous system of different species [29]. Interestingly, its expression hugely differs between the part of the digestive tract and species examined [29][30]. Stomach is a specific reservoir of food, in which mechanic mixing coupled with acidic digestion occurs. Moreover, pyloric sphincter in cooperation with pyloric antrum precisely adjusts the flow of chyme to the following parts of the digestive tract (intestines), hugely influencing the proper digestion and absorption of nutrients in the intestines. Therefore, the precise regulation of the stomach motility and gastric juice secretion are of particular importance for proper nutrition and gastrointestinal homeostasis. Until this point, data [11][31][32][33][34][35] as well as obtained neuroanatomical results consistently, suggest that—in healthy individuals CART—is mainly engaged in gastric motility regulation, as depicted by its presence in myenteric perikarya and nerve fibers supplying the muscular layer. Interestingly, the percentage of CART-immunoreactive myenteric perikarya (in relation to all myenteric neurons) varied depending on the stomach compartment studied and the researcher: in the stomach antrum such cells constituted as many as 40% [31]—50% [11]; in the gastric corpus 18% [31][32]—30% [11] until 46% [12]; and in the pylorus these perikarya accounted for 14% [11] to over 30% [31] of all myenteric neurons. Above described ‘site-dependent’ discrepancies indicate specific engagement of CART in motor activity regulation in each stomach compartment, while variations regarding the same stomach compartment presented by different authors may result from the precise location of the sample in a given part of the stomach. Porcine stomach is a huge anatomical structure, thus 2–3 cm2 specimens sampled for analysis by most of these authors may include unidentical sample localizations, although obtained from the same gastric compartment. In our studies we analyzed the entire transverse cross-section of the pyloric antrum wall (from small to large curvature) in the precisely defined location to obtain the most reliable data. Our results depicted that in the pyloric antrum CART-immunoreactive myenteric perikarya constitute about 40% of all myenteric neurons, strongly suggesting their involvement in the motility regulation in this stomach compartment.
CART-IF neuronal fibers were numerously observed in the muscular layer of the stomach antrum [11][31], corpus [11][12][31][32], pylorus [11][31], and the pyloric antrum, as depicted by our present study, which strongly supports the hypothesis about the influence of CART on the gastric smooth muscle cells functioning under physiological conditions. Since pyloric antrum propulsive activity is engaged in forming an increased pressure of food content necessary for appropriate stomach emptying [36], our neuroanatomical results imply the role of neuronal CART in the regulation of such process. However, immunohistochemical results presented by Zacharko et al. [37], and our earlier tracing study [38] clearly indicate that some of the CART-immunoreactive nerve fibers observed in the porcine gastric wall may originate in dorsal root ganglia and participate in the extrinsic sensory stomach innervation.
In healthy animals, singular, irregularly arranged submucosal CART-immunoreactive gastric perikarya were observed only in sporadic studies (present study; [12][32][39]) or were completely absent [11][31][34][40] suggesting their minor importance for intramural regulation of the stomach mucosa secretory function. The reasonable explanation for the abovementioned minor variations presented by different authors seem to result from tissue sampling differences, as described before.
Interestingly, in the other parts of gastrointestinal tract (in healthy animals), as an esophagus [33] and intestines [40][41], CART-immunoreactive submucosal neurons were encountered, although most of the CART-positive perikarya were also located in the myenteric plexus.
The results of Q-PCR technique obtained in the present experiment demonstrated for the first time the presence of mRNA encoding CART in the stomach of healthy pigs, complementing the existing and only immunocytochemical data on its expression in the gastrointestinal tract of this species [11][12][31][34][40]. Since different mechanisms are engaged in the regulation of mRNA expression and final peptide abundance, the results of Q-PCR technique and immunohistochemistry may vary in the same tissues [42]. Therefore, the presented results are of particular importance, introducing another layer of research on the mechanism of CART expression regulation in the porcine gastrointestinal tract.