Cofilin is an actin-binding protein that plays a major role in the regulation of actin dynamics, an essential cellular process. This protein has emerged as a crucial molecule for functions of the nervous system including motility and guidance of the neuronal growth cone, dendritic spine organization, axonal branching, and synaptic signalling. Recently, other important functions in cell biology such as apoptosis or the control of mitochondrial function have been attributed to cofilin. Moreover, novel mechanisms of cofilin function regulation have also been described. The activity of cofilin is controlled by complex regulatory mechanisms, with phosphorylation being the most important, since the addition of a phosphate group to cofilin renders it inactive. Due to its participation in a wide variety of key processes in the cell, cofilin has been related to a great variety of pathologies, among which neurodegenerative diseases have attracted great interest.

In 1980, Bamburg et al. identified a protein that acted as an actin disassembly factor in chicken brain extracts [1]. Proteins with similar functions were isolated from different organisms and tissues during the following years [2] and were grouped under the ADF/cofilin family, which includes actin-depolymerizing factor (ADF, also known as destrin); cofilin-1, the major ubiquitous isoform in non-muscle tissues; and cofilin-2, the major isoform in differentiated muscle. In this review, we will focus on cofilin-1 (hereinafter called cofilin).
Actin microfilaments (F-actin) are linear polymers composed of globular actin monomers (G-actin), which are polarized with a barbed end, where the addition of available actin monomers bound to ATP occurs, and a pointed end, where actin bound to ADP is released [3]. The addition and release of actin monomers allows actin microfilaments to be a dynamic structure capable of responding to stimuli. These actin dynamics are possible thanks to accessory proteins such as the Arp2/3 complex and formin, involved in actin nucleation, a process of the formation of a complex composed of actin monomers from which an actin filament can elongate; profilin, involved in microfilament elongation; or ADF/cofilin, involved in actin disassembly, although its function has been shown to vary depending on cofilin concentration relative to actin [4], as Figure 1 shows. At low cofilin/actin ratios, cofilin binds to the ADP-actin region of the F-actin, and it severs filaments in a persistent way creating new barbed and pointed ends. Then, cofilin is released from binding to an ADP-actin subunit and both can be recycled. At the same time, the pieces of F-actin generated by severing can nucleate filament growth or enhance depolymerization if ATP-actin is limited [5]. At higher cofilin/actin ratios, many cofilin subunits bind to ADP-actin, induce conformational changes in the microfilament modifying its twist and sever it in a rapid, but not persistent, way as most cofilin is sequestered and bound to actin. Cofilin saturates the fragments, which are stabilized, although they can be depolymerized to generate monomers or may be used to nucleate growth [4]. Under ATP-deficient conditions, stabilized actin bound to cofilin can form rods, slowing the actin dynamics and associated ATP hydrolysis. This mechanism allows the preservation of ATP, but if it persists, the rods can cause neurite degeneration (reviewed below) [6]. When even higher cofilin/actin ratios occur, cofilin can bind actin monomers and nucleate new filaments promoting polymerization [7]. 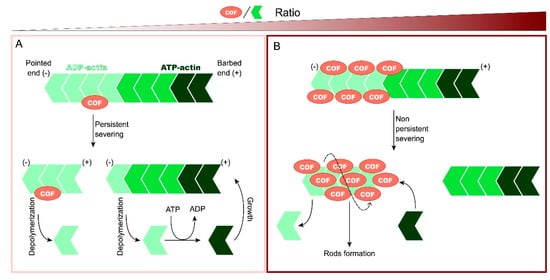 Figure 1. Function of cofilin in actin dynamics according to the cofilin/actin ratio. Cofilin has a pointed end, where actin subunits can be released from the microfilament, and a barbed end, where actin subunits can be added. (A) At low cofilin/actin ratios, cofilin binds to ADP-actin of filaments and severs it, creating new pointed and barbed ends. Then, cofilin binds to the generated fragments and induces depolymerization. Both cofilin and the released actin subunits can be recycled. (B) At higher cofilin/actin ratios, many cofilin subunits bind to ADP-actin, induce conformational changes in the microfilament, and sever it. However, severing is not persistent because cofilin is sequestered and bound to the microfilament. The generated F-actin fragments bound to cofilin are stabilized and can form rods under ATP-deficient conditions.
However, cofilin has been recently related to cellular processes other than actin microfilament disassembly. For example, cofilin could take part in rod formation, apoptosis induction, mitochondrial dynamics, microtubule instability, or even in the regulation of the gene expression [8][9][10]. Alterations in these processes could trigger pathological conditions such as neurodegenerative diseases. Neurons are cells susceptible to cytoskeleton disturbances that can lead to deficiencies in axonal transport. In addition, neurons present a high energetic demand, which, to be satisfied, requires that mitochondrial dynamics works properly [11][12][13]. However, not only neurons are involved in the correct functioning of the nervous system. The role of glial cells is essential by providing support to neurons in relevant processes including synapses, neuronal plasticity, brain fluid transport mediated by the glymphatic system, and the inflammatory response [14][15][16][17]. As in neurons, cofilin could cause alterations in glial functions or morphology changes and, consequently, lead to neurodegenerative diseases [18]. In this regard, great advances have been made to discover how cofilin and its regulatory mechanisms may be involved in neurodegenerative diseases such as Alzheimer’s disease (AD), Huntington’s disease (HD), or Parkinson’s disease (PD) [19][20][21]. In this review, we analyse the main mechanisms through which cofilin, and its regulation could be taking part in the pathology of different neurodegenerative diseases (Figure 2). 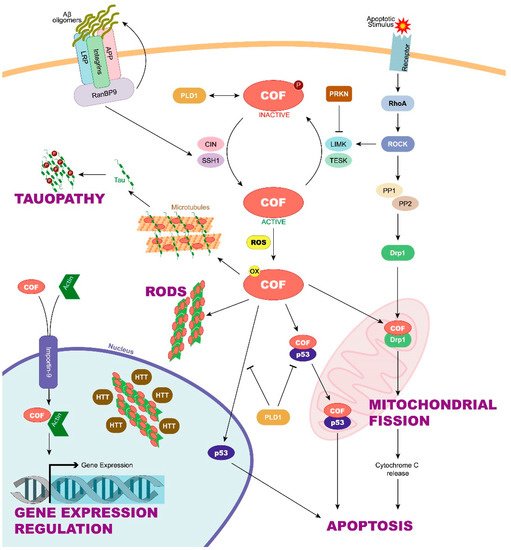 Figure 2. Role and regulation of cofilin in neurodegeneration. Cofilin function depends on the phosphorylation of its Ser3 residue, among others. When Ser3 is dephosphorylated by CIN and SSH1, cofilin enters an active state that can be enhanced by Aβ oligomer accumulation. On the other hand, LIMK and TESK can phosphorylate, and thus, inactivate cofilin. Parkin can interfere with cofilin phosphorylation by blocking LIMK function. Under oxidative stress conditions, active and oxidized cofilin can be translocated into the mitochondria, allowing it to take part in mitochondrial fission. This process is mediated by both active cofilin and the DRP1 protein and can be induced by activation of the ROCK pathway. Mitochondrial fission, in turn, triggers the release of the cytochrome C, leading to apoptosis. Apoptosis can also begin with the cofilin/p53 pathway, although inactive cofilin can prevent it activating PLD1. Moreover, active and oxidized cofilin can form cofilin–actin rods. The rods have been found to colocalize in the nucleus with huntingtin. Cofilin can also enter the nucleus together with actin through importin-9. Once in the nucleus, cofilin and actin can regulate gene expression. Finally, cofilin competes with tau for microtubule binding, displacing tau and promoting tauopathies. Aβ, amyloid β; APP, amyloid precursor protein; CIN, chronophin; COF, cofilin; Drp1, dynamin-related protein 1; HTT, huntingtin; LIMK, LIM-domain containing kinase; PLD1, phospholipase D1; PP1/PP2, protein phosphatase 1 and 2; PRKN, parkin; SSH1, slingshot; TESK, testis-specific kinase.

2. Cofilin Regulation and Its Implication in Neurodegenerative Diseases

Chua et al. have shown that after staurosporine-induced apoptosis, active cofilin can translocate from the cytoplasm to the mitochondria, leading to the opening of the mitochondrial permeability transition pore and the release of cytochrome C, which is the first step in the apoptotic cell death cascade [28]. This suggests that cofilin has an important function during the initiation phase of apoptosis. In this regard, the translocation of cofilin to mitochondria has been also linked to mitochondrial fission, a process in which cofilin would participate regulating the function of the dynamin-related protein 1 (Drp1) [40]. Moreover, cofilin could also be translocated to the nucleus due to its nuclear localization sequence [41]. In this context, cofilin has been suggested to participate in actin import to the nucleus, where actin can regulate gene expression [42]. Even inactive cofilin, a form that was thought to have no function, has been shown to have stimulatory effects on phospholipase D1 (PLD1), an enzyme involved in a wide variety of cellular responses, including calcium mobilization, superoxide production, endocytosis, vesicle trafficking, etc. [43].
All these processes, highly related to neurodegeneration, point towards cofilin as a key protein involved in many neurological diseases, but its role in the pathophysiology of these diseases still remains to be elucidated.

Cofilin has a main role in actin dynamics and, therefore, in cytoskeletal homeostasis. However, current evidence on its new functions seems to show that cofilin also contributes to degenerative processes through the formation of cofilin–actin rods that impair axonal transport and promotion of neuronal cell death, or by changes in mitochondrial dynamics and in the endoplasmic reticulum–mitochondria (ER–mitochondria) connection and communication. However, much remains to be known about cofilin, starting with its complex regulatory mechanisms. This is a key piece to understand how the modulation of cofilin activity and levels could be a critical point in neurodegenerative diseases to modify its natural history. At this point, the question arises as to whether cofilin could be used as a neurodegenerative progression biomarker. In this sense, cofilin 2 expression was demonstrated to be significantly increased in the serum of Alzheimer’s disease patients, and it performed well as a diagnostic and non-invasive biomarker with high sensitivity and specificity [44].
Thus, the biggest challenge is to determine whether cofilin is a potential target for neurodegenerative diseases, which can open new possibilities for drug development with the purpose, for example, of preventing mitochondrial alteration and axonopathy in neurodegenerative diseases. Another therapeutic approach could be to design drugs that target cofilin-regulatory proteins since many of the pathological processes related to cofilin are due to alterations in its regulation. Anyway, the recent advances in the use of high-throughput screening and computer-aided drug design can help in the search of treatments for neurodegenerative diseases [45].