New SERDs are currently under development capable of reducing ERα protein expression and blocking estrogen-dependent and independent ER signaling. SERDs are therefore considered a significant therapeutic approach to treat ER+ BC in both early stage and more advanced drug-resistant cases.

Breast cancer (BC) is a heterogeneous disease comprising different subtypes, which can be identified through molecular biomarkers that also act as predictive factors. Luminal BC is characterized by the expression of estrogen receptor-positive (ER+) and/or progesterone receptor-positive (PR+), HER2-positive BC is defined by overexpression of human epidermal growth factor 2 (HER2) oncogene and conversely, triple-negative BC is characterized by lack of expression of ER/PR and HER2.

Among these, luminal is the most common BC subtype. In the case of metastatic breast cancer, luminal subtype accounts for more than sixty-five percent of all cases. Recommended treatment is endocrine-based systemic therapy, since multiple publications and consensus recommendations conclude that chemotherapy would not be the best option for endocrine sensitive disease, except in situations such as visceral crisis [1].

Direct targeting of ERα is achieved by selective estrogen receptor modulator (SERM) (e.g., tamoxifen) and selective estrogen receptor degrader (SERD) (e.g., fulvestrant). SERMs compete with estrogen for ER binding and show mixed agonist/antagonist capabilities in a tissue-specific fashion. Meanwhile, SERDs create an unstable protein complex that induces ER protein degradation via proteasome [4]. Fulvestrant is a first-generation SERD approved by the FDA in 2007 for treatment of metastatic luminal BC in postmenopausal patients following progression on prior ET with AI or tamoxifen [5][6].

Two major isoforms of the estrogen receptor have been identified, ERα and ERβ: however, the role of ERβ in cancer remains unclear [7][8]. The two isoforms are encoded by two genes located on different chromosomes ( ESR1 on chromosome 6 and ESR2 on chromosome 14), and regulate different specific genes [9][10]. Both isoforms are structurally organized in six different functional domains (A to F). The receptor contains two activation functions (AF) regions (AF-1: domains A/B and AF-2 domains E/F) , responsible for the transcriptional activation of the receptor. C domain is the DNA-binding region, while D domain is a flexible hinge region containing the nuclear localization signal and links the C to E domain. Finally, E domain harbors the hormone-binding site [11].

While ESR1 alterations, such as amplifications, can be identified in up to 30% of ER+ BC patients [12][13], it is still uncertain whether this alteration has clinical significance in terms of ET resistance: while some studies have found that ESR1 amplifications were associated with improved disease-free survival [14][15] several others studies report an association between ESR1 amplifications and tamoxifen resistance [16][17].

Similarly, clinical outcomes for ESR1 fusions require further investigation and efforts, since to this date conclusion cannot be drawn regarding their implications [18]. Fusions and rearrangements are estimated to have an incidence of 1%, mainly involving the first two noncoding exons of ESR1 binding to various C-terminal sequences from the coiled-coil domain-containing 170 genes (CCDC170) ( ESR1 -e2 > CCDC170), consequently conferring endocrine resistance to tamoxifen [19].

A retrospective analysis of the SoFEA phase III trial showed that median PFS in fulvestrant-containing regimens was significantly better than those treated with exemestane (HR = 0.52; 95% CI 0.30–0.92; p = 0.02) for metastatic BC (MBC) and ESR1 mutations [20]. This data may suggest that fulvestrant could be a potentially more adequate ET for ESR1 mutated patients. Conversely, ESR1 Y735S mutations may reflect higher resistance to fulvestrant [21][22].

PROTACs are heterobifunctional molecules made up of a ligand for ER (target protein) and another ligand, serving as the E3 ubiquitin ligase complex substrate. Once PROTACs bind to ER, recruit the E3 ubiquitin ligase complex, leading to a polyubiquitilation of ER ending on a proteasomal degradation [23]. PROTACs produce a rapid and complete elimination of intracellular receptor and inhibition of ER signaling [24][25]. PROTACs action is pure antagonism of ER realized by elimination of the receptor, rather than conformational changes of ER to block transcriptional activation. Only a transient binding event is required for degradation, and the PROTAC molecules can cycle through multiple rounds of activity, removing substoichiometric quantities of proteins. ( Figure 4 ) 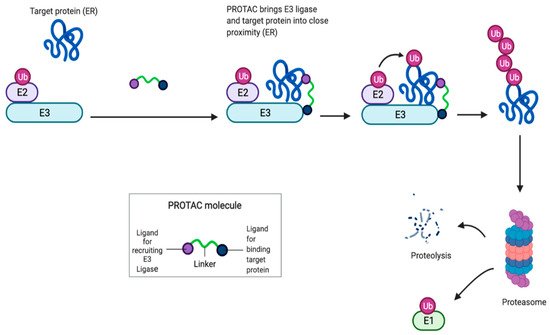 ARV-471 is a PROTAC in which E2 is linked to a small-molecule ubiquitin E3 ligase–binding moiety, facilitating the interaction between the ER and an E3 ligase complex that will tag the ER for degradation by the ubiquitin-proteasome system [26].

ER is involved in the initiation of BC tumorigenesis and in the progression of disease after ET. Targeting, modulating, and degrading ER is the goal of new drugs development, including ESR1 gene mutations identified after ET. Fulvestrant is the only approved SERD and can be used in first-line treatment or after AI or tamoxifen progression. Overcoming fulvestrant’s limitations, new SERDs are currently in early-phase clinical development and some of them in phase III clinical trials. New SERDs have demonstrated improved pharmacokinetic and bioavailability compared to fulvestrant in preclinical and early studies, with a potentially higher clinical benefit rate. In this line, PROTACs and SERCAs open new paths to degrade ER, and are still in early clinical studies.

All the currently available results need to be confirmed in phase III clinical trials with larger patient population, exploring the activity of ET plus CDK4/6i combination progression disease setting.