Rectal prolapse is a condition that can cause significant social impairment and negatively affects quality of life. Surgery is the mainstay of treatment, with the aim of restoring the anatomy and correcting the associated functional disorders.

Pelvic organs prolapse, including rectal prolapse (RP), is a condition that mainly affects women in middle and advanced age and can involve both the anterior and posterior compartments. A multidisciplinary approach is traditionally required, involving urologists, gynecologists, and colorectal surgeons [1]. Depending on the anatomy and the type of prolapse, symptoms may vary from urinary or fecal incontinence to obstructed defecation, pelvic pain, and sexual dysfunction. This condition may significantly worsen the quality of life (QoL) and represent an important social and economic burden in the setting of an aging population.
Surgery is the mainstay of treating this complex disease, and several abdominal and perineal approaches have been described to date. However, since multiple options are available, treatment may be surgeon-dependent and is influenced by many factors. Therefore, a tailored, multidisciplinary approach is recommended, with abdominal procedures usually performed in younger, healthier patients and perineal procedures offered to higher-risk individuals.
External rectal prolapse or symptomatic internal rectal prolapse with rectocele or enterocele are commonly treated with ventral rectopexy in fit patients.
The abdominal approach aims to reduce rectal mobility by fixation with or without excision of the redundant colon. Rectopexy is associated with lower recurrence risk than simple rectal mobilization, with a similar rate of overall complications [2]. Fixation of the prolapsed rectum to the sacral promontory is the key to restore the physiological anatomy of the pelvic floor. This goal can be achieved by simple suturing, as first described by D. Cutait in 1959 [3], or using a mesh fixed anteriorly, posteriorly, laterally, or all over the rectum. Many techniques have been described, such as the Ripstein rectopexy, based on the anterior fixation of a mesh below the sacral promontory, or the Wells procedure, with the detachment of the lateral ligaments of the rectum.
Both these approaches are associated with a significant complication rates and are currently abandoned [4][5].
There is no evidence as to whether associated sigmoidectomy results in better functional outcomes compared to a simple rectopexy. Resection rectopexy is thought to improve complaints of constipation, reducing the possible kinking of the redundant colon. However, it is a matter of fact that the creation of an anastomosis may increase the risk of severe complications [6][7][8]. Ventral rectopexy is typically performed laparoscopically and involves the anterior placement of a mesh to the sacral promontory, as described by D’Hoore [9]. It is favored over posterior mesh rectopexy since it reduces autonomic nerve injuries by avoiding postero-lateral dissection of the rectum. This approach thus reduces impairment of rectal motility that could potentially and ultimately lead to ongoing functional disfunction and impaired quality of life [10][11].
Since the introduction of the minimally invasive treatment for rectal prolapse in the early 90 s [12], the uptake of laparoscopy has been progressively growing to treat this condition. The benefits of the minimally invasive approach are well known in terms of faster recovery and normal return to daily activities, lower morbidity, decreased postoperative pain, shorter length of stay, and lower blood loss and the laparoscopic approach as the preferred technique has been recommended by several authors [13][14][15][16]. Laparoscopy has shown similar outcomes compared to the open technique for the surgical treatment of rectal prolapse [14][17]. A meta-analysis by Sajid et al. in 2010 reported no statistically significant difference between 688 patients treated with an open or laparoscopic approach in terms of recurrence, functional outcomes, and complication rate. Moreover, they reported a shorter length of hospital stay in the laparoscopic group [18]. However, the laparoscopic approach can be challenging, especially in the deep and narrow pelvis or in the setting of morbid obesity.
Since its introduction, the uptake of robotic surgery in several fields of general surgery has constantly grown. Robotic assistance is rapidly increasing in pelvic floor surgery because of its advantages in complex maneuvers such as dissection and intracorporeal suturing in the deep narrow pelvis. The technical features of the available robotic platforms may potentially overcome the limitations of conventional laparoscopy, thanks to enhanced dexterity, a stable optical platform, and exposure (third arm) that allows for a “precision” surgery to be performed. Adequate traction and counter traction allow for optimal surgical field exposure following embryological planes with minimal tissue trauma and blood loss [19]. Moreover, it has the potential of shortening the learning curve even regarding rectal mesh rectopexy, as demonstrated in other surgical procedures [20][21].

The patient is placed in the lithotomy position. The arms are folded at the sides, taking care to provide adequate padding along the pressure points. An anti-slipping soft foam dedicated pad should be placed directly under the patient to conduct the operation safely. This device facilitates the steep Trendelenburg position often required to ensure adequate pelvic exposure.
A Verres needle is inserted at Palmer’s point in the left hypochondrium to create the pneumoperitoneum. Access to the peritoneal cavity is achieved by a first assistant 12-mm optical trocar placed in the right flank under direct vision. The costo-femoral line is the landmark used to place three 8 mm robotic trocars along a parallel straight line, approximately 4 cm lateral to the previous one. Finally, an additional 8 mm robotic trocar is positioned in the left flank. Figure 1 shows the trocar layout. Limited laparoscopic lysis is performed when adhesions are encountered to permit the safe positioning of the robotic trocars; the adhesiolysis is then completed under robotic assistance. 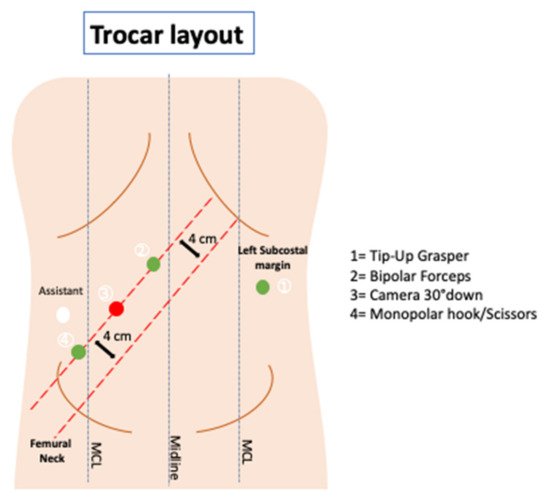 Figure 1. Trocar layout.
The patient is then positioned in a steep Trendelenburg and right tilt (20–25°), allowing the small bowel to be displaced under gravity, thus obtaining a good surgical field exposure. Next, the Da Vinci Xi® surgical system (Intuitive Surgical, Sunnyvale, CA, USA) is docked from the patient’s left side. A full-robotic procedure is performed, with the assistant surgeon and scrub nurse standing on the patient’s right side (Figure 2). 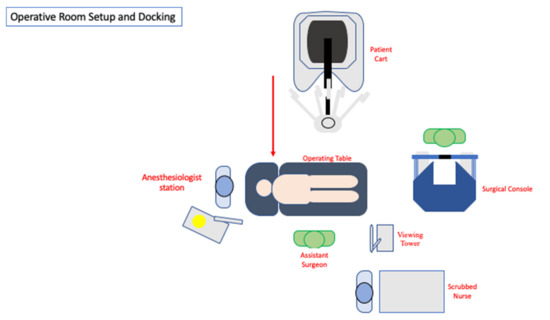 Figure 2. Operative room setup.
Tip-up grasper, bipolar forceps, and monopolar cautery hook/scissors (according to operating surgeon’s preference) are mounted on robotic arm 1 (R1), arm 2 (R2), and arm 4 (R4), respectively. Robotic arm 3 (R3) is used for the 30° down scope.
The sigmoid colon is grasped and elevated anteriorly and cranially by the tip-up grasper in R1.
The peritoneum is entered by sharp dissection starting at the base of the rectosigmoid mesentery, identifying the avascular areolar plane along the sacral promontory. The right hypogastric nerve plexus and the ureter are then identified and preserved. The rectovaginal septum represents the limit to conduct the peritoneal incision.
At the level of the pouch of Douglas, the peritoneal incision is continued from right to left over the ventral aspect of the rectum.
A Breisky uterine and vaginal manipulator can identify and lift the posterior vaginal wall, thus facilitating the dissection along the anterior rectal wall. At this stage, the third arm is used as a retractor deep in the pelvis (lifting the posterior vaginal wall, once identified), and the assistant’s atraumatic grasper lifts the rectum. The rectovaginal septum is entered, and anterior dissection is carried out all the way down to the levator ani plane, as inferiorly as possible, and laterally to the cardinal ligaments and pelvic sidewalls. The rectum is fully mobilized anteriorly, while the posterior and lateral attachments are left intact to preserve the autonomic nerves and optimize functional outcomes in the postoperative period.
A 14–18 cm long, 3–4 cm wide, light-weight macroporous polypropylene mesh is inserted into the abdominal cavity through the 12 mm assistant port. Biologic and titanium-coated polypropylene mesh can also be used. The mesh is positioned along the anterior wall of the rectum caudally and at the level of the sacral promontory cranially (Figure 3 and Figure 4). Four interrupted stitches are used to secure the mesh along the anterior distal extraperitoneal surface of the rectum, using a 2-0 non-absorbable monofilament. The mesh is then fixated at the level of the sacral promontory with a 2-0 non-absorbable monofilament interrupted suture, taking care to preserve both the presacral venous plexus and the hypogastric nerves. The peritoneum is then closed with a reabsorbable barbed running suture (Figure 5). No drain is routinely left in place. Trocars are removed under direct vision, and the fascial defect of the 12-mm assistant port is closed with absorbable sutures. 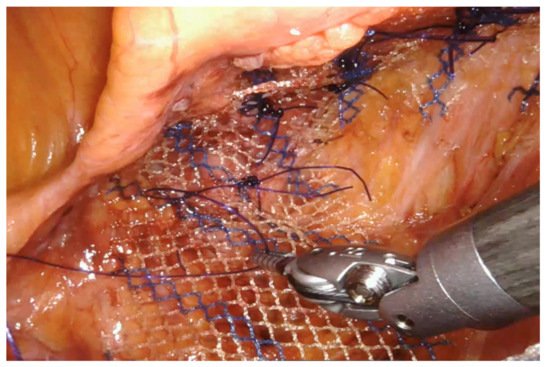 Figure 3. The mesh (macroporous polipropilene) is secured distally at the level of the anterior rectal wall with permanent sutures. 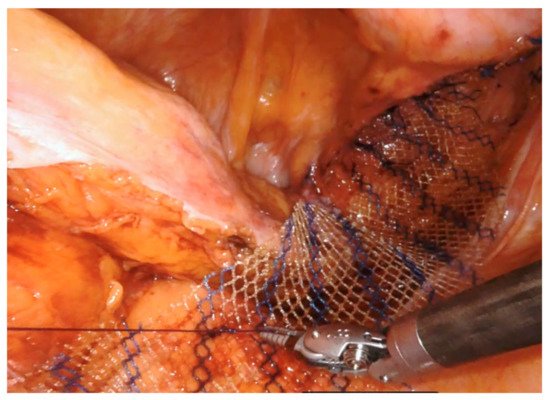 Figure 4. The mesh (macroporous polipropilene) is secured cranially at the level of the sacral promontory with permanent sutures. 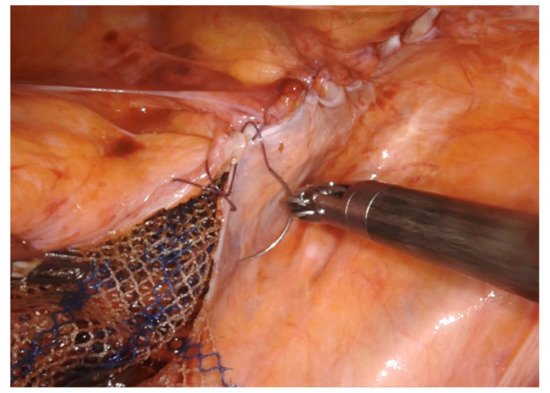 Figure 5. The peritoneum is closed with absorbable barbed running suture.