Open space design, as an integral part of urban design, is the art of relationship.

Environmental challenges of the past decades, such as global climate change, the issues of urban livability and responsible water management, have played an inevitable role in self-definition and acknowledgment of the landscape architecture profession, raising the value of the overarching, environmentally sensitive work of landscape architects in open-space design as well.
The social context has also changed a lot during the past two decades. Incomes and living standards after the affiliation with the European Union have considerably increased in Eastern European countries, similarly to the economic growth of China starting in the 1990s—a phenomenon especially visible in some industrial and commercial centers such as Shanghai. The social improvements caused a higher social expectation with regard to a livable and loveable urban environment. Issues of environmental quality have come into prominence for urban residents. The need for a natural environment, the humanisation of open spaces, and a more environmentally conscious and more innovative urban design have fostered the development of the profession. The creativity enhancement, attractiveness and high artistical quality of open-space renewal also represent important design goals, appreciated by the profession and society. Due to the dynamic urbanisation, it can best be observed in the cases of metropolises and smaller settlements how wide the range of spectrum is for interpreting unique streetscape and townscape. The highest skyscrapers, historic urban districts controlled by strict policies as tourist destinations, development projects and artificial islands advertised as luxury, lookout towers with exceptional panoramas, Ferris wheels, restaurants and accommodations attempting to evoke the rural lifestyle—have all been built with a pursuit of uniqueness regarding the image of the settlement. The same pursuit can be detected in the appreciation of existing local values, in the discovery of the cultural heritage of small communities that stand away from the brilliance of metropolises and in the growing awareness of natural assets [1][2][3][4][5][6][7]. The advance of open-space design in Eastern and Central Europe is also due to the accession to the European Union, as several international charters, agreements and recommendations were introduced after 2005, with significant funds for implementation, thus providing resources for the realisation of local projects [8][9].
The global economic and financial context has brought important changes into the life of the cities in the new millennium, opening new dimensions for landscape architecture both at the urban and site level. More attention is paid to the conservation and sustainable use of existing values: the healthy and green urban environment, the reduction of social inequalities, the democratic use of space. Environmentally friendly and energy-efficient transport has also become more important. Bottom-up initiatives mobilising community participation and human capacities are gaining ground as well.
As a result of all these changes, the improvement of urban spatial quality, based on the enhancement of historical and ecological values, has become a main developmental aspect of urban governance in Eastern European countries and in China as well [10][11][12][13][14][15][16]. In the development process, perspectives of various stakeholders of usually different professional backgrounds must be harmonised according to a planning hierarchy. It is not only standards, but also design codes and related plans that support the coordination of the work of designers, engineers, and the investor. The latest instruments of urban governance are based on processing big data, which requires a knowledge of statistics and software. The results are then published as design manuals for practical application. Regarding the contemporary practice, the growing influence and active participation of citizens requires that the latest design manuals are also suitable for the coordination of and the provision of information to the public. In return for an accessible language, our common knowledge assets are expanding through plenty of data and the expertise of citizens, while administrative processes may become easier through the dissemination of information.

2.1. The Key Role of Historic Open Spaces in the Strategic Development of Cities

Protection of unique urban character is a key element of the concept, also from the perspective of landscape architecture. The special urban characteristics—such as uniqueness and the adaption to successful patterns [17][18][19]—provide a unique context to the architectural features and open spaces of the cities. In order to protect the unique character and panoramas, all development projects are assessed in this context. Listed buildings also obtain their real significance in the context of adjacent public spaces and cityscape features. Integrated renewal of the buildings and the related public spaces is therefore an essential criterion for renovation projects. Quality, unique urban character and preserved historic value have growing importance regarding urban environments. Characteristic streetscapes and appearance make cities more attractive for both visitors and investors, strengthening also their economic position. An urban environment with features of the past preserved and integrated into a contemporary context is a source of inspiration for the citizens, strengthening local identity [20][21][22].

The Downtown of Budapest is a priority area of the renovation of historic open spaces, with its public squares renewed through various complex projects during the past 15 years. The objective of a complex renewal of the urban configuration, functional layout and traffic in the Downtown had been approved already in 2005 by the Podmaniczky Programme, Medium-term Urban Development Programme [23]. This provided the basis for the local authority to launch the Heart of Budapest urban development programme and set the main development objectives by March 2008.
Following the Podmaniczky Programme, from 2013 the development of Budapest open spaces was advanced through a call for entries named ”TÉR-KÖZ” announced by the Office of Urban Planning at the City Council, boosting the renewal of several public squares and community spaces in the city [24]. Beyond a sensitive approach to heritage conservation and design, ”TÉR-KÖZ” projects also explicitly supported local identity, innovative solutions, public participation and sustainability. So far, 113 Budapest public spaces have been renovated within the framework of the programme [25].
The renovated New High Street of Budapest (General design: Közlekedés Kft; Landscape design: s73 Kft—M-Teampannon Kft) is an almost 3-km-long North-South axis parallel to the Danube, with vehicle traffic radically calmed and a coherent public space network appropriate to the novel role of the Downtown successfully reached. For both citizens and visitors, the High Street serves for linking, mentally as well as physically, the various character areas of the Downtown (Figure 2 and Figure 3). 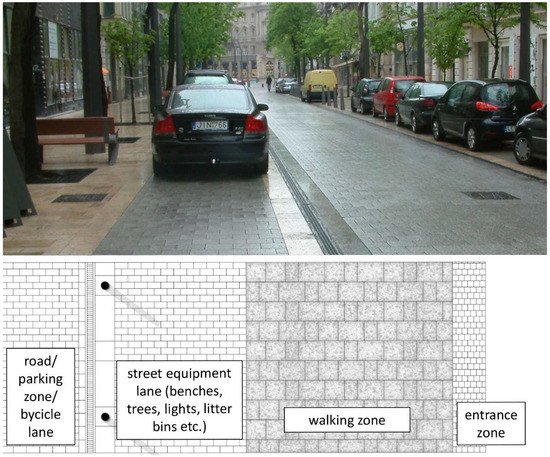 Figure 2. The pavement layout of the High Street—the plan (below) and the realised layout (above). The stones used are: granite slabs (for the areas serving for vehicle and mixed traffic or parking), limestone slabs (pedestrian and furniture zones), and the combination of the two. (Photos by the authors).

Figure 3. The limited space available and the narrow streets required several elaborate design details for the location of water features and plants. (Photos by the authors, 2012).
An outstanding general value of the open-space renovation is that it provides a highly sensitive urban design, responding to both the historic and spatial character of the place, without any archaic solutions. The spatial layout is clear, simple, modest. In this respect, it perfectly meets the expectations, reconstructing the threefold spatial concept of the designer Imre Steindl with contemporary, 21st century design tools.
Széll Kálmán Square (General design: FÖMTERV Zrt; Architecture: Építész Stúdió Kft; Landscape design: Lépték Terv Kft.) is a busy transport hub that connects the main parts of the city, Óbuda, Buda and Pest, and is therefore used by all means of public transport, vehicle and pedestrian traffic.
The concept for the open-space renovation is therefore rather traffic-oriented. The purpose of the renovation, based on national, local and EU funds, was the creation of an urban environment that is suitable to fulfill its role in the long-term, has a high architectural quality, fits well into the urban context and transport system, and is feasible and environmentally responsible (Figure 5). The principles of the renovation may be briefly summarised as follows: 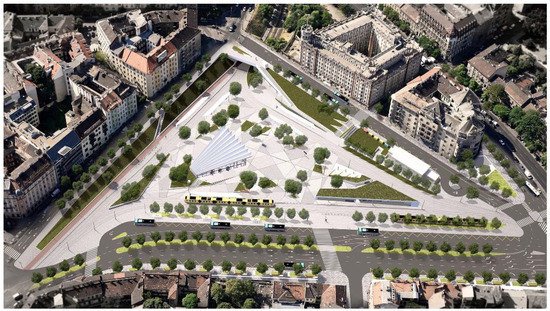 Figure 5. The open-space renovation design plan of Széll Kálmán Square.
Amongst the artistic features that determine the atmosphere of the square, the most apparent is the historic relief map in front of the glass facade at the entrance to the metro (Figure 6). The pale green and brown patterns on two angularly arranged, irregular exposed concrete walls make a composition to experience not only through the visual, but also the tactile sense (Designer: Baróthy Anna and Szövetség 39 Group). The source of the map is the ordnance survey map of Pest, Buda and Óbuda from 1823, which was an epoch-marking work of exceptionally highly qualified Habsburg ordnance surveyors.

Figure 6. The two monumental units of the exposed concrete relief map (left), and a detail of the map (right) with the 1823 depiction of Széll Kálmán Square. (Photos by the authors, 2019).

Open space design, as an integral part of urban design, is the art of relationship. The duty is therefore to explore new, hidden relationships or strengthen existing ones that provide a visual urban experience, unveiling the values and characteristics of the specific place to the spectator.
The character of the cities under review reflects a special planning approach: with an urban development strategy focused on the sale of properties, until the 21st century, little attention was paid to open-space design solutions that would have a positive effect on the character.
The original role of urban open spaces has significantly been extended, their uses and functions substantially evolved and renewed (representation, socialisation, commercial, cultural and living space, visual effects, traffic, leisure and garden). At the same time, the planning methodology of urban open spaces has also changed, the role of the planner having become more complex. The main reason for that is that the planning process needs multiple actors. In addition to the client and the planner, the users also actively contribute to the planning process (participatory planning), so that their needs can more directly shape the public places. Moreover, local governments, other professionals concerned, public utility providers, planning and other relevant authorities (e.g., cultural heritage conservation, nature conservation), NGOs (e.g., bicycle associations, associations for blind people), contractors, park managers and others also participate and comment on the plan. The legal background for planning is also becoming more rigid and complex, so that a consensus is more difficult to achieve. The final result then must have the agreement of all participants, which requires a comprehensive coordination based on a complex approach from the landscape architect as the general planner.