Z. aethiopica and I. sibirica are two flowering species that have been used as emergent vegetation for the treatment of domestic wastewater. Z. aethiopica is  in high demand in the national market in Mexico. The two species have a proven specific capacity to tolerate and take up pharmaceuticals  and heavy metals.

Nowadays, pharmaceuticals represent a group of aquatic environment pollutants of great concern mainly due to their massive use, worldwide occurrence in aquatic environments at trace levels, and physicochemical characteristics [1]. A production of more than 2 million of tons per year of a diversity of these compounds has been reported; this quantity increases every year [2][3] and includes more than 6 million of commercial products [4]. The physicochemical characteristics are very variable among pharmaceutical products, but all of them are biological active substances in low concentrations and, therefore, may cause adverse effects on human health and species exposed to polluted environments [4]. Even now, however, their effects individually or together on living beings are not fully understood. In addition, the major concern is with regard to recalcitrant drugs, such as carbamazepine (CBZ), which persist in reclaimed water after conventional wastewater treatments [5]. Effluents from wastewater treatment plants represent the main source for the entry of CBZ into aquatic ecosystems [6]. CBZ is a drug used to treat a large number of mental diseases and compulsive disorders [5][7] and it is widely consumed worldwide, reaching up to 96% of the world pharmaceutical market [8]. As a consequence, according to some studies, CBZ is one of the drugs that is most frequently detected in aquatic environments around the world [9][10]. Therefore, for more than a decade, CBZ has been categorized as an anthropogenic marker in aquatic environments [11]. Moreover, several studies that have assessed the effects of CBZ on different living organisms indicate that this drug is among the most dangerous in aquatic ecosystems [6][12][13][14][15][16].

On the other hand, treatment wetlands (TWs) have been evaluated in many studies for the removal of a large list of pharmaceuticals and have proven to be effective at different levels, with a very high removal of some drugs. However, CBZ is commonly found among drugs with low removal efficiencies, generally lower than 50% with an average of 30% [17]. Nevertheless, a previous study performed by this research group found a CBZ removal efficiency of 62% in a pilot-scale hybrid TW. In this study, the greater removal was obtained in horizontal subsurface flow wetlands (48%) planted with a polyculture that included Iris sibirica, Typha latifolia, and Zantedeschia aethiopica. The horizontal subsurface flow wetland was located as the first stage and operated with a flow rate of 33.3 L/d, a theoretical hydraulic retention time of three days and a hydraulic loading rate of 6.9 cm/d [18]. It is very likely that the plants played a very important role in obtaining such efficiencies, because at the end of the experimentation period, CBZ was found in the roots and aerial tissues of the three species, with higher values in the ornamental plants. CBZ uptake by emergent vegetation in both hydroponic studies and TWs has already been reported in the literature [19], as well as the recognition of plants capacity to uptake, translocate, accumulate, and even metabolize organic compounds [1][17]. However, currently there is insufficient information regarding the contribution of plants to the elimination of pharmaceuticals, as most studies are based solely on the comparison of concentrations between influents and effluents. In addition, for CBZ removal, according to [19], plant uptake is an especially important mechanism in comparison to other degradation mechanisms.

Phytoremediation is a technology that takes advantage of the biochemical processes of plants by which they decompose, stabilize, fix or metabolize organic and inorganic contaminants present in soils, sediments and water, thus reducing its concentration and danger  [20]. The ability of plants to cope with emerging pollutants and heavy metal vary amongst the different species.  Z. aethiopica and I. sibirica are two flowering species that have been used as emergent vegetation for the treatment of domestic wastewater  (Figure 1) [21][22]. Additionally, these two species have a proven specific capacity to tolerate and take up pharmaceuticals such as carbamazepine [1]and heavy metals [23].

Z. aethiopica is a perennial  plant native to temperate and cold areas of Southeast Africa;  with an attractive and solitary spathe. The spathe is white and fragrant from 15 to 22 centimeters long and ends in a point [21]. This species is in high demand in the national market in Mexico, as well as in international markets as a potted plant, in gardens or as inflorescence for cutting [21]. I. sibirica is native to Northeast Turkey, Russia and Eastern and Central Europe and it is a rhizomatous herbaceous perennial that can grow from 50 to 120 cm tall [24]. 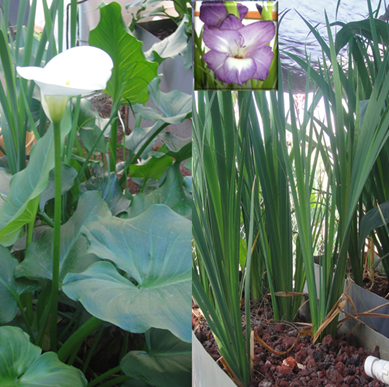