Beta2-microglobulin (B2M) is a key component of major histocompatibility complex class I molecules, which aid cytotoxic T-lymphocyte (CTL) immune response. B2M also plays an important role in innate defense and does not only function as an adjuvant for CTL response.

B2M is characterized as a scaffolding protein that retains the native structure of MHC class I molecules in antigen present cells (APCs) to present peptides to cytotoxic CD8+ T cells. Because MHC class I molecules can affect many physiological functions in mice and human beings, animal models of an engineered B2M deficiency with low MHC class I levels address major challenges in the endogenous cross-presentation of the host [1][2][3]. In addition to being a part of non-membrane-bound proteins associated with MHC class I molecules, B2M can be released in free form in serum [4][5], a feature of the deposition of amyloid fibrils in the skeletal muscular system.

The role of B2M in adaptive immunity has been extensively studied, but its role in innate defense has been neglected. Roch et al. discovered that five earthworm defense proteins exhibited compositional similarity with mouse B2M, reflecting an evolutionary function of B2M in innate defense among invertebrates [6]. The antibacterial activity of B2M was first discovered in human amniotic fluid a decade ago [7], indicating that potassium ions are critical for the antibacterial activity of B2M. B2M causes the dissipation of bacterial transmembrane potential without damaging the cell membrane and it exhibits a wide range of antibacterial activity against not only antibiotic-susceptible but also antibiotic-resistant bacteria, including L. monocytogenes, E. coli, and S. aureus [7]. Due to its antigen presentation role in APCs, B2M-knockout in animal models indicates that immune cells, except for those carrying the T-cell receptor type, can also play an important role against pathogenic infection [8]. In addition, D’Souza et al. discovered that a non-class B2M-restricted mechanism affects the early accumulation of lymphocytes and resistance to Mycobactrium tuberculosis (M. tuberculosis) in mice. They also observed that mice had a ability to fight pulmonary infection with tuberculosis when this mechanism was absent [9]. The alternative role of B2M in monocyte filtration had not been further investigated until the discovery that B2M acts as a precursor of antibacterial chemokine in human respiratory epithelial cells [10]. A 9-kDa fragment derived from B2M, named sB2M-9, was identified in the culture medium of human respiratory epithelial cells (REC) upon IL-1β stimulation and presents in the nasal fluid from healthy individuals [10]. The mechanism underlying the shedding of sB2M-9 from REC remains unknown.

Many functional peptides derived from their precursor sequences are known to be released through a proteolytic mechanism. For example, hCAP18, a human antimicrobial peptide (AMP) precursor, harbors an active domain, namely LL-37 in its C-terminal sequence [11]. A recent study found that a carboxyl terminal fragment of beta-subunit hemoglobin exhibits antimicrobial activity in the placenta for protection against bacterial and viral infection [12].

We recently analyzed a panel of cationic peptides cultured in A549 medium infected with IL-1β by proteomic approach, thioredoxin was especially prominent in addition to some other immune responsible factors, such as cytokines and chemokines (Table 1). Thioredoxin, a small redox protein and a chemokine [14], has been discovered to regulate a spectrum of physiological functions, including influencing a disulfide bond-linked dimer of Tapsin:Rep57 within the MHC class I peptide-loading complex [15]. In a recent study, the substantially enhanced antimicrobial activity of hBD-1 due to a reduction of disulfide bonds also indicated the key role of thioredoxin in innate defense [16]. In summary, considering the evidence for the antimicrobial activity of B2M_99-116 fragment, this study hypothesized that the short chain peptide B2M_99-111 derived from sB2M-9 plays a role in host defense as an AMP. Thus, whether an unrecognized reduction reaction by thioredoxin sheds the short chain fragment from sB2M-9 warrants investigation.

Table 1. Shot-gun proteomic analysis of a panel of cationic polypeptides in a culture medium of REC. A549 cells, a type II alveolar epithelial cell line from human adenocarcinoma, were stimulated by Il-1β (1 ng/mL) following a previous method [10]. MS/MS data were processed in MassLynx 4.0 software to obtain the Mascot search results. In addition to some immune response regulators, thioredoxin is notably indicated to involve a reduction process for short chain production.

AMPs can have a pH dependent mode of action in a wide range of multicellular organisms [28]. In general, they exhibit antimicrobial activity through interacting with the component of the cell membrane to disrupt the membrane’s integrity. After inserting itself into the lipid bilayer of the membrane, AMPs self-aggregate to form pores on the membrane to kill the bacterium [29]. A different group of AMPs exhibited optimal activity against microbes at acidic pH conditions; however, some of them were activated at a basic range (Table 2). The different pH values in different tissues were therefore considered to function as a natural barrier against microbial infection.

4. Role of Aggregated B2M in Antimicrobial Activity and Cytotoxicity

A study reported the binding of IgG to staphylococcus and to the gram-positive streptococcus groups A, C, and G [41]. The role of a potential AMP for B2M was also reported by Kronvall et al.; specifically, they demonstrated that only aggregated B2M with a molecular weight higher than 100,000 Da binds to the surface protein structure in streptococcus groups A, B, and G [42]. Apparently, monomeric B2M exhibits no binding effect. Notably, the effect of aggregated B2M on group A1 almost reached maximum binding after only 10 min of incubation. Considering the structural similarity between B2M and the constant (Fc) domains of human IgG and given that IgG binds to staphylococcal protein A, scholars have also investigated the binding effect for B2M on the bacteria. We previously observed that sB2M-9 instead of intact B2M had an SA-binding effect, with no crossing reaction for the IgG Fc domain [10]. In addition, we demonstrated that macrophage-activating lipopeptide-2 (MALP-2) but not lipopolysaccharide (LPS) induces sB2M-9 shedding, which is the same effect as that induced by SA instead of Klebsiella pneumonia (a gram-negative strain), implying an affinity for Fc-binding in gram-positive bacteria. Eventually, this effect triggers monocytes migration to the bacterial clumps. AMPs can self-aggregate to facilitate their insertion into bacterial membrane through a pore-forming mechanism [43]. Because sB2M-9 shedding is mechanistically similar to that of other AMPs, whether the sB2M-9-mediated effect on SA binding is associated with a monomer, a dimer, an oligomer or highly ordered amyloid fibrils remains unknown and requires further study.

In essence, a variety of potential factors can contribute to the formation of B2M amyloid fibrils, including the concentration of free-form B2M, an acidic pH, the truncation and cleavage by proteolysis, sequence mutation, the presence of metals (especially those with a divalent cation), posttranslational modification (PTM), and lipid interaction [44].

Because a beta-sheet rich molecule such as B2M exhibits biological effects that differ depending primarily on the concentration and pH environment, a sB2M-9 concentration of 5 μg/mL is present in the culture medium of human REC, which is close to that in human nasal fluid and other biological tissues [10][45]. This concentration is also similar with those of other AMPs that exhibit channel forming activity [46]. Caution must be exercised when interpreting in vitro finding obtained using doses that are higher than their physiological counterparts and findings obtained under acidic pH, which enables B2M to disrupt microbe membranes. This finding seems to indicate the amyloid-mediated cytotoxicity of B2M fibrils rather than the effect of AMP [5][13].

In addition to sB2M-9 shedding, a fragment with a high pI value hidden in B2M that governs antimicrobial activity could be released in response to a microbial challenge. Moreover, intact or fragmented B2M, which is the more numerous, self-aggregates to form oligomers and amyloid fibrils that may either protect cells against microbes or, conversely, wreak havoc in the body if the cleavage process is dysregulated (Figure 2). 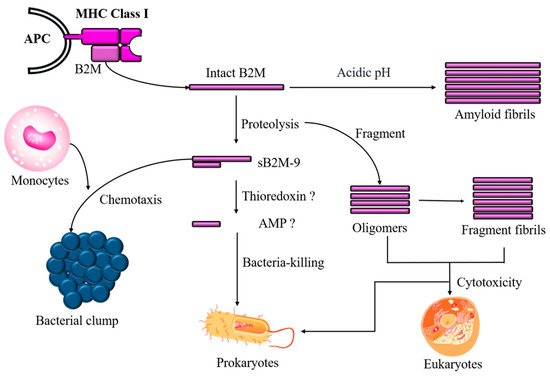 Figure 2. Diagram for B2M as a precursor of sB2M-9 chemokine and perhaps as a potential AMP. B2M that is at an increased level at either the intact or fragmented state under an acidic pH is prone to structural aggregation and possibly into amyloid fibrils that cause cytotoxicity and membrane disruption in eukaryotic cells; this effect is similar to that of AMP, which usually forms pores on microbe membranes.