The industrialization has led to a huge demand for a network control system to monitor and control multi-loop processes with high effectiveness. WirelessHART is a wireless sensor networking technology based on the existing conventional wired Highway Addressable Remote Transducer (HART) protocol. The protocol utilizes a time-synchronized, self-organizing, and self-healing mesh architecture. This is the first wireless communication protocol that adopts over 2.4 GHz radio-frequency channel in the IEEE 802.15.4 for industrial process control applications.

For many decades, industrial process plants have used analog signals in the wired channel for communication with field devices (sensors) to take appropriate control actions to ensure process stability [1][2]. The most commonly used communication protocols, such as HART, Fieldbus, Modbus, and PROFIBUS, emerged in the mid-1980s. However, wireless technological advancements required the development of industry-standard wireless protocols for them to be used in process monitoring and control. These wireless communication protocols require small- to mid-scale network infrastructures consisting of multiple sensor nodes working together to acquire data from field devices installed in different environments. Their design is based on the application-specific requirements, since each industrial process has multiple objectives and different infrastructure needs [3]. In the past few years, IWSNs have emerged in numerous application fields, including personal health monitoring [4], building and civil infrastructure monitoring [5][6], automotive applications [7], power converters [8], power and smart grids [9], energy harvesting [10], smart cities [11], agriculture [12], food processing [13], underwater wireless sensor networks [14][15], and environment monitoring [16].
Process and industrial automation fields, such as steel manufacturing, oil and gas, pulp and paper, and power generation, have started to gradually adopt IWSNs because of the new technological advancements made and the possible flexibility in handling complex closed-loop processes [17]. In industrial processes, they were expected to achieve about 80% of the market share in 2020 by overtaking wired networks at the field level due to their efficient and easily deployable infrastructure [18]. The main reason for adopting wireless motes is due to their operational and installation cost reduction of up to 60% in comparison with conventional wired field devices, according to an industry operation survey overseen by Emerson Process Management [19][20].

The applications of process control can be classified into three distinct sub-categories based on the control system point of view, as presented in Table 1 [21]. A brief classification for each is given underneath.
Table 1. Classes of industrial process automation.

The transmission of sensor data to the controller in safety and supervisory control is very much essential. Additionally, issues such as packet loss and latency cannot be tolerated because these are emergency control systems, and their failure will lead to catastrophic accidents. Thus, sensors connected to these systems are always in standby mode, with a maximum permitted latency of 10 ms.

Closed-loop control is a conventional system that has a controller maintaining the desired set-point of the process. Here, dead-time and external noise cause significant issues, while the maximum allowed latency varies from 10 to 100 ms, with a less critical rate in comparison with emergency class systems.

In this classification of control systems, latency is not considered an essential factor in taking control actions and there is a maximum allowed latency of 1000 ms. Here, field device data are commonly utilized to perform maintenance operations for calibration and repair. However, in some cases, data transfer consistency is needed to continue the process operations.

Initially, the ZigBee wireless standard was developed to monitor and control different home automation products. Later, it was extended for specific industrial processes, but it was not suitable for regulatory and emergency classes because of its poor data reliability. ZigBee is highly suitable in monitoring and alerting systems, where energy savings is given priority [21]. The remaining communication protocols were explicitly developed for factory automation applications, where each of them was designated for various industrial application classes. WirelessHART, for example, was designed to support closed-loop supervisory and regulatory applications because of its efficient routing capabilities and high potential communication between multiple field devices to ensure multi-channel frequency hopping [22][23]. ISA100.11a and WIA-PA are intended to provide more flexible coverage over all classes of industrial processes listed in Table 1. All these protocols use IEEE 802.15.4 as a physical standard and have a MAC layer with an equal number of channels.
On the other hand, emergency systems require a latency of not more than 10 ms, reliable data transmission, and mote parity. Thus, for these kinds of systems using a multi-hop network is not a suitable option because of network stability issues [24]. The communication standards examined here were mainly developed for monitoring and control category applications, such as open-loop and alerting systems, as shown in Table 1. The preferred standards among the existing IWSNs in industries were surveyed in 2012 and 2014; the results are summarized in Table 2 [25]. The results indicated that one out of four users preferred WirelessHART, even though it faced a slight decline in the number of adopters. ISA100.11a has attracted adopters, which has resulted in a marginal growth in its implementation. The remaining wireless standards adopted among industrial users are WIA-PA, ZigBee, and Factory Automation. This gives WirelessHART a clear lead for use in the process automation industry [26][27].
Table 2. Preferred IWSN standards [25].

This section gives a brief introduction to the WirelessHART protocol, its typical network structure, and different OSI layers usage. Furthermore, a detailed review of the application of WirelessHART for industrial process monitoring and control in both simulation and real-time environments will be discussed.

The evolution of the HART protocol is shown diagrammatically in Figure 3. From the figure, it can be seen that since 1988, with only around 4 million wired devices, the standard has incorporated devices such as digital control valves and controllers with HART6 by 2002. By 2007, EDDL and wireless technology were integrated into the latest version of the HART protocol (HART7), released as WirelessHART (IEC 62591), which is the first wireless communication protocol to adopt an over 2.4 GHz radio frequency channel in the IEEE 802.15.4 for industrial process control applications [28]. 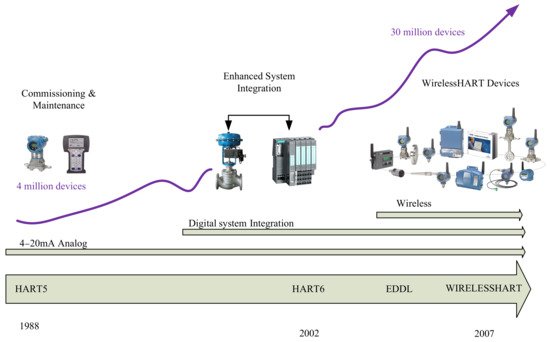 Figure 3. Evolution of the HART protocol [29].
WirelessHART, being based on the traditional HART protocol, has already gained wide patronage in the industry due to the necessity of demand in the open international standard that suits industrial requirements. The latest version (version 2) of the WirelessHART protocol was approved by the International Electrotechnical Commission in 2016. The standard possesses some new updated features, such as:
The WirelessHART communication protocol utilizes only five layers of the OSI model out of the seven layers. Figure 4 shows the usage of different OSI layers between the conventional wired HART and the WirelessHART protocols. The five OSI layers used by WirelessHART are the physical layer, the data link layer, the network layer, the transport layer, and the application layer. Routing, communication scheduling, and corresponding signal generation are handled by the central network manager. Further detailed discussion of the various OSI layers of WirelessHART and other IWSN communication protocols can be found in [24][30]. 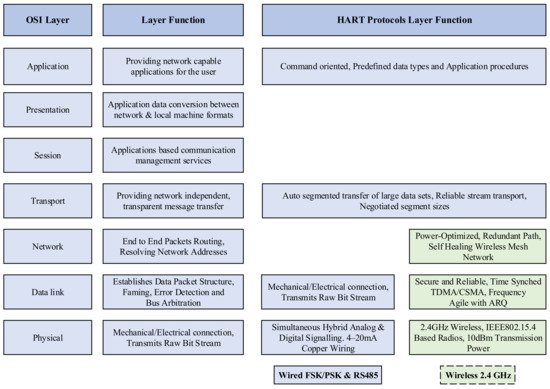 Figure 4. OSI layer of the conventional wired HART and the WirelessHART protocols [31].
An added advantage of WirelessHART is that it can be extended to control the process rather than simply monitor it. Wireless local area network (WLAN), Bluetooth, ZigBee, and Internet Protocol Version 6 (IPV6) are not extensively adopted for industrial wireless applications because of their limitations in controlling capabilities. At present, two of the most widely used industrial international wireless standards are WirelessHART and ISA100 Wireless [32][33]. Among these two, WirelessHART leads with more than 30 million installed field devices, and it is projected that this figure will reach over 46 million by 2021 [34]. Hence, there will be very little or no need for training the plant operators to start using the WirelessHART. Based on its flexibility, interoperability, simplicity, and acceptability, the WirelessHART has many advantageous over the ISA 100.11a standard. Simultaneously, the ISA 100.11a standard is yet to gain approval from the International Electrotechnical Commission (IEC). This has given WirelessHART supremacy in industry [35]. Both standards aim at non-critical wireless applications for control and monitoring purposes. Nevertheless, WirelessHART is generally preferred by industries since its legacy wired HART communication protocol was once the dominant and most widely adopted protocol in industrial field devices. Additionally, converting existing wired HART field devices to wireless ones is less costly and there is no need for additional sensor components [36].
The WirelessHART network control system (WHNCS) structure is shown in Figure 5. There are five essential elements present in the WHNCS, namely: 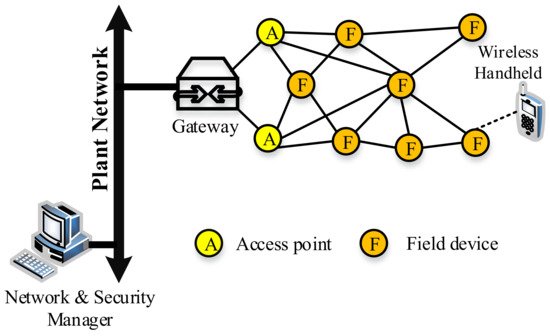