Organoids represent one of the most important advancements in the field of stem cells during the past decade. The earliest usage of the term goes back to 1946 when Smith and Cochrane described a cystic teratoma case by referring to it as “cystic organoid teratoma”. Organoids, or as the term literally signifies “resembling an organ”, are three-dimensional (3D) in vitro culturing systems that originate from self-organizing stem cells, capable of mimicking the in vivo structural and functional specificities of an organ.

Organoids represent one of the most important advancements in the field of stem cells during the past decade. The earliest usage of the term goes back to 1946 when Smith and Cochrane described a cystic teratoma case by referring to it as “cystic organoid teratoma” [1]. Organoids, or as the term literally signifies “resembling an organ”, are three-dimensional (3D) in vitro culturing systems that originate from self-organizing stem cells, capable of mimicking the in vivo structural and functional specificities of an organ [2]. They can be derived from either pluripotent stem cells (PSCs) or organ-specific adult stem cells (ASCs) [3]. PSCs, for instance, are capable of generating in vitro tissue models recapitulating what happens in in vivo organogenesis, where tissues are derived from embryonic stem cells (ESCs) [4]. Figure 1 summarizes the potential sources for organoids development. 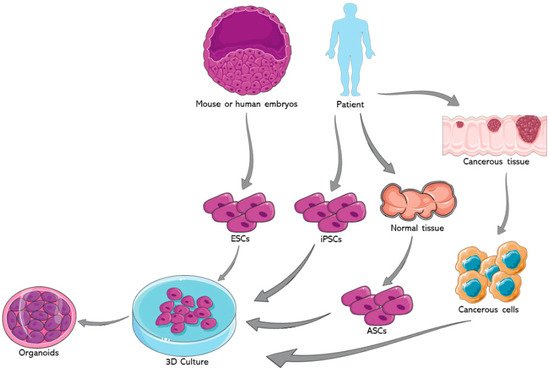 Organoids have a great potential to be used in a multitude of fields [5][6]. One such avenue is cancer research, particularly through the development of tumor organoids. For example, glioblastoma organoids were established with the hopes of creating a satisfactory in vitro model that reflects the in vivo hypoxic gradients and heterogeneity of this greatly heterogenous cancer. This glioblastoma model can be used for both diagnosis and therapeutic purposes [7]. Furthermore, our group succeeded in generating and characterizing patient-derived prostate organoids from fresh primary tissue specimens. We confirmed the validity of those organoids as a relevant in vitro model to assess personalized treatment responses wherein we observed a differential drug response between different patient samples, at the protein and gene levels [8]. Moreover, we were able to isolate novel patient-derived prostate epithelial cells from the generated organoids [8]. Organoid models were also used in cancer immunotherapy research. In fact, Jenkins et al. used patient and murine derived organoids to establish an ex vivo profiling of PD-1 blockade. This would significantly help in dissecting the tumor microenvironment, enhancing precision immune-oncologic therapies, and ultimately deciphering the mechanisms behind immune checkpoint blockade resistance [9]. Furthermore, Dijkstra et al. co-cultured epithelial tumor organoids with peripheral blood lymphocytes to expand the population of tumor-reactive T-cells. This co-culture model can be also employed to characterize the sensitivity of neoplastic cells to the T cell-mediated killing at a personalized patient level [10]. Another potential avenue for the usage of organoids is hereditary diseases such as cystic fibrosis (CF), which maintain the tissue of origin’s genetic fingerprint. Beekman’s group was able to elucidate a quantifying assay of the CF transmembrane conductance regulator (CFTR) function, the malfunctioning chloride channel in CF, using an intestinal model that closely mimics the core aspects of the disease’s in vivo characteristics. This can aid in diagnosis and potentially provides novel therapeutic approaches to enhance drug development strategies for the disease [11]. After the COVID-19 pandemic has swept the world, organoids are proving to be of increasing value as viral replication platforms that can help expand our understanding of this virus [12].

Even though it has significant potential, organoid culturing is still rife with many challenges. Despite these systems’ heterogeneity, the tumor microenvironment is often not properly reconstituted since most of the patient-derived organoids (PDOs) do not have the supporting stroma [13]. Other challenges observed with glioblastoma patient-derived xenotransplantation (PDX) models include cost, time consumption, and variable rates of transplantation [14]. Another limitation with the PDX system is that the immune response cannot be assessed properly since the host strains used are immunodeficient. Therefore, there is a poor assessment on how the immune system would have responded [15]. In this review, organoid culture will be thoroughly discussed along with its various applications in disease modeling ( Figure 2 ). 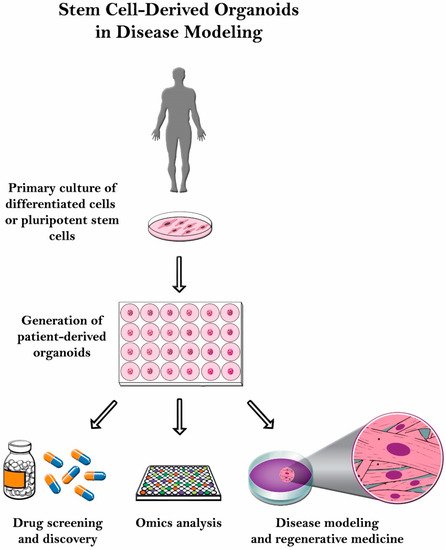 Figure 2. Schematic illustrating the use of stem cell-derived organoids for various biomedical and clinical applications including drug screening and discovery, disease modeling, genetic manipulation, omics analysis, and regenerative medicine among many others.

Human iPSCs can be differentiated into functional thyroid tissue [16] which aids in cell-based regenerative therapy for hypothyroidism and in vivo production of circulating thyroid hormone [16].

As a final note, it is vital to mention that a considerable effort was dedicated to improving endoderm-derived organoid culture systems. For instance, Giobbe et al. suggested that extracellular matrix hydrogels derived from decellularized porcine small intestinal tissue can provide natural environment for the generation, stable growth, and in vivo transfer of endoderm-derived organoids [17]. The air liquid interface method that relies on collagen gels was recently employed to harbor the growth of 3D primary cells containing components of both mesenchymal and epithelial origin from mouse and human gastrointestinal tissues [18].

Recently, a 3D artificial thymic organoid model was reported to induce successful differentiation of hESCs to mature, functional, conventional T cells in vitro, with a varied T cell receptor repertoire. This method is relevant to the evaluation of human T cell development, and the establishment of likely adoptive T cell immunotherapies for cancer [25].

Organoids’ properties also make them a powerful model to study the interaction between a host and infectious organisms such as Helicobacter Pylori or Salmonella Enteritica , gut-microbiota interactions, and inflammatory bowel disease, as well as the resulting inflammatory conditions. Furthermore, patient-specific responses to microbes can be mainly exploited [31]. The interaction between Clostridium difficile ( C. difficile) and complex human epithelium was studied by using the HIOs. Viable C. difficile was introduced by microinjection techniques into the lumen of HIOs. Colonization of HIOs with C. difficile strain VPI 10463 leads to the disruption of the organoid epithelium. These effects seem to be caused by the primary virulence factors of C. difficile , the toxins TcdA and TcdB. This study shows that HIOs can be used for the comprehensive molecular and cellular analysis of the pathogenic interactions between C. difficile and human intestinal epithelium [32].

ASC-derived organoid models have presented significant results within the modeling of human disease for a broad spectrum of life stages, early development and throughout to adulthood.

It is worth noting that there is a difference in ASC-derived organoid cultures between mouse and human systems. This has signified the need for human-based laboratory model systems to fully understand human development and pathophysiology.

Based on the source of cells, Table 1 and Table 2 highlight the differences in generation methods and recapitulation of the native organ’s physiology respectively.

In conclusion, although there might be many challenges hindering the use of organoids for clinical applications, this new technology holds great potential in translational research. Organoid technology has recently grown to incorporate drug screening, disease modeling, genetic manipulation, omics analysis, and many others (Figure 2). Experimental procedures that have been developed to culture organoids can be applied to different human organ systems, helping us better understand the human biology and development of diseases (Figure 3, Table 3). Indeed, human organoid systems are strongly proposed to offer exceptional opportunities to improve human health and move the biomedical and research fields to a whole new level of personalized patient-targeted medicine. 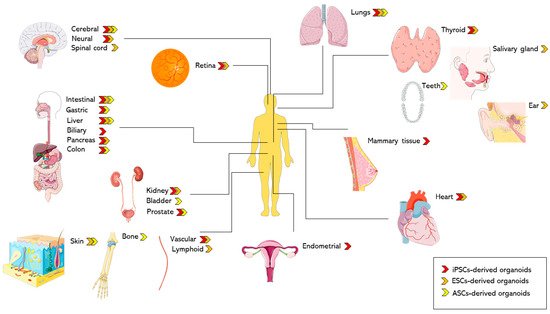 Figure 3. Reported organoid systems based on tissue of origin. Using different types of stem cells, many organs and tissues have been simulated using the organoids technology. Organ and human model images are imported from Servier Medical Art by Servier (http://smart.servier.com/), accessed on 24 May 2021. Licensed under a Creative Commons Attribution 3.0 Unported License (https://creativecommons.org/licenses/by/3.0/).
Table 3. Table representing the multiple organ and disease models based on their respective organoid origin (iPSC, ESC and ASC).