Tungsten (W) occurs naturally in soils and the Earth’s crust is the most important source of this element. Tungsten reserves have been estimated to be approximately 3.1 Mt in ore deposits, where the metal exists mainly as a component of several minerals, such as wolframite (Fe, MnWO4) and scheelite (CaWO4).

Tungsten (W) occurs naturally in soils and the Earth’s crust is the most important source of this element. Tungsten reserves have been estimated to be approximately 3.1 Mt [1] in ore deposits, where the metal exists mainly as a component of several minerals, such as wolframite (Fe, MnWO4) and scheelite (CaWO4) [2].
Until quite recently, the behavior of tungsten in the soil did not receive particular scientific interest. This stemmed from the belief that tungsten was substantially inert in the environment and relatively insoluble [3][4]. Moreover, although some sporadic studies reported that tungsten could be solubilized under particular conditions of pH and redox potential [5][6][7][8][9][10], the lack of adequate analytical techniques at that time meant that tungsten was merely cited as being similar to molybdenum, but without its essential properties being thoroughly investigated. In reality, tungsten can be solubilized and can be mobilized in the soil environment and can be leached to ground waters [5][6][7][8][9].
Tungsten has drawn increased attention after the discovery of high levels in several environmental compartments. Concern over tungsten started with the cases of three sites in the west of the United States, were the metal was attributed to being a potential source of the childhood leukemia clusters [11][12][13][14][15][16][17][18]. Nowadays, the USEPA has included tungsten compounds in the National Priorities List [19] with particular consideration to poly-tungstates.

2. Production and Uses of Tungsten

Low-carbon technologies are fundamental to achieving sustainable growth based on energy production from renewable sources, with fewer CO2 emissions and more efficient energy consumption. These technologies use the physical and chemical properties of some metallic elements as fundamental components in engines and batteries in green production processes. Tungsten increases the efficiency of clean and renewable energy techniques that serve as alternative to fossil fuels [20].
The main issues in the production of green energy are linked to the limited availability of certain critical metals, including tungsten. Critical metals are defined as those elements that are indispensable for the functionality of low carbon technologies, but are expensive and have potentially unstable supplies. Moreover, political and environmental effects induced by a growth in demand highlight a clear discrepancy between consuming and producing countries [21].
In 2020, an estimated 84,000 metric tons of tungsten were produced globally. China is, by far, the world’s largest producer since the largest deposits of tungsten ores, 60% of worldwide reserves, are located in China. In the EU, Austria (with the Mittersil mine), and Portugal (with the Panasqueira mine), are the biggest tungsten producers [22].
There are serious concerns that the increase in green technologies by countries that are trying to limit their greenhouse gas emissions will inevitably and paradoxically increase demand for metals, such as tungsten. On the one hand, there is a risk of shortage in the tungsten supply and, at the same time, the global flow of tungsten could impact on environmental matrices derived from increased production and use.
In a seminal article from fifteen years ago by Koustopyros et al. [13], tungsten was defined as “a relatively known transition metal”, but “of high strategic importance for the years to come”. Today, due to its wide use in high-tech industries and in low-carbon applications [23], tungsten is internationally considered to be a “critical metal” [24][25][26][27].
Tungsten has the highest melting point of all metals (3422 ± 15 °C) and the lowest vapor pressure. With a density of 19.25 g cm−3, tungsten is also among the heaviest metals. Due to its thermal and chemical stability, it is the key metal for thermo-emission applications. Due to its peculiar properties, including its very high hardness, tungsten is irreplaceable in several industrial and military applications [28]. Tungsten-based materials are envisaged in future nuclear reactors to withstand the high energies required and the repeated impact of significant thermal loads [29]. Tungsten is crucial for emerging technologies and is of increasing major economic importance [30].
The procedure used to track the fate of an element throughout its life cycle, recognizes, for tungsten, some primary life stages (Figure 1): mining, production, fabrication and manufacturing, use, waste management, and recycling [22].

In many of these phases, tungsten can enter the soil ecosystem. In the mining phases, where the tungsten is extracted from ores, the W concentration in surrounding soils can reach values higher than 1000 mg kg-1 [31]. In the manufacturing and fabrication phases, in which products containing tungsten that are requested by the market are prepared, the production of dust and atmospheric transport must be considered as an important environmental issue, also in terms of deposition of airborne particles on soils [15].

Regarding the use phase, concerns have been raised about military applications of tungsten [31] in the production of tungsten/nylon bullets under the US Army’s Green Armament Technology Program as substitutes for lead-based munitions [32]. Millions of tungsten/nylon bullets have been produced [33].
Tungsten is also used in large amounts in optical and photovoltaic applications, nanomaterials, catalysts to produce hydrogen [34], and numerous household products; thus, increasing amounts of tungsten residues are being generated. Tungsten is also being spread in the environment and through soils by municipal sewage sludge, solid waste, and landfill leachate [13].
During manufacturing and usage, the release of tungsten due to emissions (e.g., aerosolization) can result in increased concentrations in soils surrounding facilities [35][36], while products containing tungsten can release the metal into the environment due to wear and tear. Due to concern about human health, the spatial trends of airborne tungsten have been investigated using technologies such as wavelength-dispersive spectrometry and transmission electron microscopy [15]. Nano particles of composite metals, such as tungsten carbide cobalt (WCCo), are increasingly being produced and have key mechanical properties for mining and drilling industries [37].

The behavior of tungsten depends on the specific characteristics of the soils that regulate its distribution between the liquid and the solid phases. In soil, its oxidation state ranges from −2 to +6, the most common of which is +6. In fact, in soils, tungsten occurs mainly as tungstate anion (WO42−), which is thermodynamically very stable [13]. However, the dynamics of tungsten in soil are complex due to its tendency to form polymers, even with other ions present in the soil, such as phosphates and silicates (Figure 2). 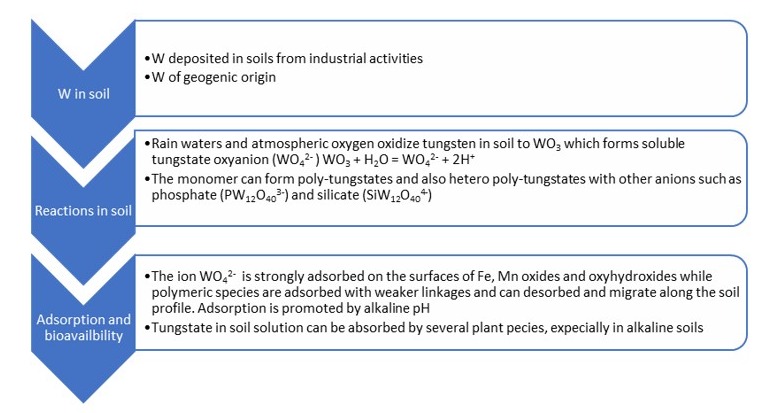 The immediate source of tungsten that is available for biological processes in soil, including plant uptake, is the amount present in the soil solution. This quantity is determined by the solubility of tungsten compounds and is controlled by the actual concentration in the soil solution and the quantity weakly adsorbed on soil surfaces and easily releasable in the desorption processes. The sorption processes determine the environmental behavior of tungsten in soils and its bioavailability to plants.

In a circular economy, the main raw material for tungsten production in the future should ideally derive from the high quantities of tungsten scrap [22][38]. The management of waste and tungsten reusage will affect various environmental sectors, including soil.