Cardiac fibrosis is the excess deposition of extracellular matrix (ECM), such as collagen.

Cardiac fibrosis is defined as a state in which excess extracellular deposition of collagens and extracellular matrix (ECM) occurs [1]. Cardiac fibrosis occurs when the heart is exposed to stresses, such as ischemic injury and chronic high blood pressure. Since fibrosis causes cardiac dysfunction, it is a target for treatment with drugs, medical devices, or tissue transplantation. ECM proteins, including collagen, are primarily produced by myofibroblasts, which are differentiated mainly from resident fibroblasts. Manipulation of the activity and number of myofibroblasts appears to be important for the inhibition of progression to more severe fibrotic states, and for recovery from the fibrotic state [2]. Since myofibroblasts play a central role in inflammation and fibrosis after cardiac injury [3], a detailed knowledge of fibroblasts and myofibroblasts is necessary when developing novel antifibrotic drugs. Recent technological advances have been used to address some of these issues.

There are several types of cells in the healthy heart. Cardiomyocytes are cells that are responsible for contraction and relaxation. In addition to cardiomyocytes, the heart is made up of fibroblasts, endothelial cells, macrophages, mast cells, and lymphocytes, and a few other cell types. These cells interact with each other to maintain homeostasis in both healthy and diseased conditions [4]. In the resting state of a healthy heart, fibroblasts constantly modify the extracellular environment by producing and degrading the ECM [5]. The number of fibroblasts in the healthy heart is low. However, fibroblasts are differentiated to myofibroblasts when the heart is exposed to stresses, such as cardiac injury or chronic hypertension. Myofibroblasts actively produce collagen and other ECM proteins. Endothelial cells release autocrine and paracrine factors, such as nitric oxide and prostaglandins, which affect other types of cells [6]. Endothelial cells also express adhesion molecules that are involved in direct cell-to-cell interactions with myocytes or leukocytes. Macrophages residing in the healthy heart are different from macrophages infiltrating during cardiac injury. Resident macrophages play important roles in maintaining cardiac homeostasis, by facilitating atrioventricular conduction [7]. In injury, resident macrophages are replaced by monocyte-derived macrophages [8], which regulate fibrosis by secreting profibrotic cytokines and growth factors. Macrophages also play a role in matrix remodeling by secreting proteases. Mast cells are also present in the healthy heart. Mast cells expand in fibrotic areas and contribute to fibrosis, partly by the production of fibroblast-activating cytokines and growth factors [9][10][11]. Subsets of T lymphocytes may directly activate fibroblasts by producing profibrotic cytokines, interleukin (IL)-4 and IL-13. T lymphocytes may activate macrophages, inducing fibrosis. T lymphocytes may also affect the survival of cardiomyocytes, which promote the replacement of dead cells with fibrotic scarring [12]. Regulatory T cells (Tregs) are associated with the attenuation of myocardial fibrosis in various disease models of the heart [13], and myocardial infarction [14] through the modulation of macrophages [15] and fibroblasts [16]. Thus, each cell contributes differently to injury- or stress-induced cardiac fibrosis. 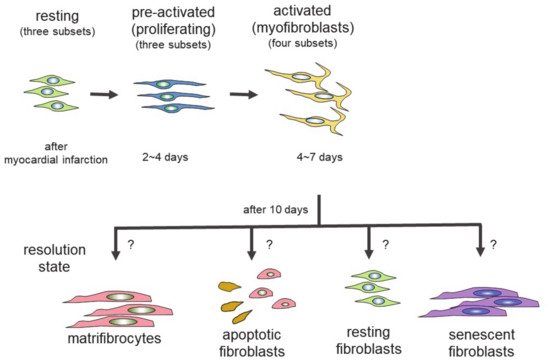 Figure 1. Differentiation of fibroblasts to several states of fibroblasts. Fibroblasts of each state have different proliferating activity and function. Scheme is based on two reports [33][34].
Table 1. Expression of marker proteins.
Table 1 is modified from [33]. * Marker proteins: DDR2, discoidin domain receptor 2 (collagen type 1 receptor); PDGFR-α, platelet-derived growth factor receptor-α; TCF21, the transcription factor 21; α-SMA, α-smooth muscle actin; CILP, cartilage intermediate layer protein; COMP, cartilage oligomeric matrix protein; VEGF-A, vascular endothelial growth factor A.
These results demonstrate the heterogeneity of fibroblasts, but the relationships and interactions between the cells in each state are unknown. Their functions and contribution to cardiac fibrosis remain to be determined in the future.
Although systemic sclerosis is a cause of cardiac fibrosis, many studies of cardiac fibrosis in animal models have been of myocardial infarction, pressure overload-induced hypertrophy, or treatment with neurotransmitters or hormones. It is unknown whether cardiac fibroblasts of systemic sclerosis exhibit states that are similar to those induced by myocardial infarction.

The possibility that fibroblasts convert to other cells, or vice versa, after maturation has been investigated [35]. The prolonged culture of macrophages resulted in cells that express various fibroblast markers, such as type I collagen, prolyl-4-hydroxylase, fibroblast-specific protein-1, and fibroblast activation protein (FAP) [35]. Animals that express yellow fluorescent protein (YFP) only in cells of myeloid lineage have been created. These marker fibroblast proteins were detected in infiltrating YFP-positive macrophages after myocardial infarction. Chlodronate liposome treatment to deplete macrophages reduced the number of collagen-positive fibroblast marker-expressing cells. These results suggest that fibroblasts are derived from macrophages. It is interesting to examine the contribution of the macrophage-fibroblast transition to cardiac fibrosis. Although the contribution of the macrophage-fibroblast transition to cardiac fibrosis is not unknown, inhibition of the transition to fibroblasts may help to reduce fibrosis after myocardial infarction.
It has been reported that endothelial cells are not a major source of fibroblasts in the adult mouse heart [24]. However, there is controversy about the conversion of endothelial cells to myofibroblasts. It has been reported that fibroblasts acquire endothelial cell-like phenotypes during ischemia-reperfusion [36][37]. A series of experiments, using mice with genetically labeled fibroblasts, demonstrated that 20%–40% of fibroblasts express various endothelial cell markers, and the isolated cells can form a capillary network. The expression of p53 was essential for the process of conversion from fibroblasts to endothelial cells [36]. The stimulation of p53 signaling improved cardiac dysfunction during ischemia-reperfusion. However, the opposite result was reported by a different group, who found that resident fibroblasts did not contribute to neovascularization after cardiac injury [37]. In the latter report, the pulse-chase labeling of fibroblasts after ischemia-reperfusion showed that resident fibroblasts did not express genes involved in angiogenesis, which are characteristic of endothelial cells. The origin of almost all endothelial cells was resident endothelial cells. Different approaches resulted in different conclusions. Thus, it may be necessary to confirm the findings using other techniques, such as scRNAseq and proteomic analysis of isolated cells.

Myofibroblasts have been recognized primarily as the cells that produce ECM components, such as collagen and fibronectin. They also interact with inflammatory cells through secreted factors. A new role for myofibroblasts in inflammation induced by myocardial infarction has been reported. Myofibroblasts, but not fibroblasts, efficiently phagocytose apoptotic cells and secret cytokines that suppress inflammatory responses [38]. This activity is similar to that of macrophages, which induce immuno-suppressive responses by the engulfment of apoptotic cells.
Myocardial infarction induces necrosis of cardiomyocytes. Phosphatidylserine is present on the surface of cells that have undergone necrosis, as observed at apoptosis. Therefore, terminal deoxynucleotidyl transferase-mediated dUTP nick end labeling (TUNEL) staining can be used as a marker of dead cells. Apoptotic cells are thought to be engulfed by phagocytes, such as macrophages. Nakaya et al. examined the expression of various molecules that are involved in engulfment after myocardial infarction [38] (Figure 2). 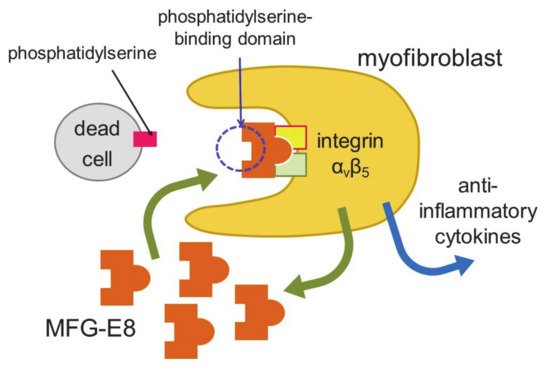