The replacement of the cantilever tip by a living cell in Atomic Force Microscopy (AFM) experiments permits the direct quantification of cell–substrate and cell–cell adhesion forces. This single-cell probe force measurement technique, when complemented by microscopy, allows controlled manipulation of the cell with defined location at the area of interest. Here, measurements aimed to characterize and compare the adhesion capacities of parental MCF7 cells and cells overexpressing the embryonic transcription factor Sox2, which have a higher capacity for invasion and are more resistant to endocrine therapy in vivo. Our findings demonstrate the strength of this approach to assess and compare the adhesion properties of cell lines and to illustrate the heterogeneity of adhesive strength found in breast cancer cells.

Cancer-induced alterations at the molecular level result in changes at the cellular and tissue level, leading to defects in cell proliferation, migration, and adhesion. Cell adhesion is mediated in cell–cell and cell–extracellular matrix (ECM) interactions by adhesion receptors, such as cadherins, integrins, and proteoglycans. The tight control of cell biochemical and mechanical microenvironment through ECM components like fibronectin, collagen, proteoglycans or laminin is disturbed during the various phases of cancer disease [1]. This leads to ECM remodeling accompanied by increased fiber alignment and matrix stiffening [2]. Adhesion dysregulation is crucial for cancer dissemination and the establishment of metastasis in other tissues with vastly different microenvironments. The process starts with cancer cell detachment, the passing of cellular barriers, transport through a fluid system, and finally adhesion and proliferation at a distant site [3,4]. Therefore, an improved understanding of the interactions of cancer cells with ECM components is warranted.

Studying the interplay between cells and ECM components requires elucidation of surface properties. Engineering matrix protein scaffolds can significantly alter the attachment of cells on surfaces, presenting an environment to the cells that is closer to the situation in vivo [5,6]. Two-dimensional surface modifications are sensed by cells and transduced via multiple signaling pathways, which influence cell motility, proliferation, and mechanical properties [7,8,9]. The application of thin coatings of fibronectin (FN) to substrates is widely used as cell culture technique to improve cell adhesion. Fibronectin is a large ECM glycoprotein that carries binding sites for both integrins as well as syndecans [10]. A complex interplay of groups of receptor molecules is needed to promote the formation of focal adhesions, strengthen the actin cytoskeleton, and induce cell spreading [11,12].

The characterization of cell adhesion to substrates in vitro facilitates the elucidation of the underlying molecular mechanisms. Cellular attachment and spreading on surfaces are governed by reactions of different force and time scales that need to be considered. To date, a large variety of techniques has been developed to study adhesion. Still widely in use are cell attachment and cell spreading assays, centrifugal assays, and optical microscopy techniques, such as bright field, fluorescence microscopy, or interferometry. In recent years, surface sensitive techniques such as quartz crystal microbalance (QCM) or surface plasmon resonance (SPR) have been developed, as well as various passive (including particle displacement, particle deformations due to strain, stress-based FRET sensors, etc.) and active (including atomic force microscopy (AFM) and optical and magnetic tweezers) measurement techniques [13,14]. Of those techniques, AFM offers a unique combination of scale (nm to µm) and force (pN to µN), while enabling measurements in ambient conditions, (bio)chemical modifications of the probe, and combination with optical microscopy [15,16,17,18]. AFM cantilevers can be chemically modified to pick up cells that are loosely attached to the underlying substrate. Thus, cells are used to probe the interaction with either surfaces or other cells, permitting force-, position-, and time-resolved adhesion measurements [19,20]. Recently, we have successfully demonstrated an experimental approach to prepare cell samples for such measurements utilizing bacterial surface layer protein coatings, known by their high efficiency as anti-fouling coatings [21,22,23], in a feasible, easy-to-handle, one-step manner [24].

The altered expression profiles of ECM components, such as integrins, cadherins, and syndecans, have been found to correlate with tumorigenesis, tissue invasiveness, metastatic behavior, and survival in many types of cancer, including breast cancer [25,26]. Breast cancer presents the highest incidence of all tumors and is still the first cause of death from cancer in women. Approximately 70% of breast tumors express the estrogen receptor (referred to as ER-positive) and, therefore, they are treated with endocrine therapy. Tamoxifen, an ER antagonist, has successfully been used in the clinic for many years; however, very often resistance to therapy develops [27]. Various mechanisms have been revealed to underlie development of resistance to therapy, including the presence of cells with stem-like properties. Cancer stem-like cells (CSCs) have been shown to be implicated in tumor initiation and resistance to different forms of therapy [28]. We have found that tamoxifen-resistant cells are enriched for CSCs and express high levels of the stem cell marker Sox2 [29], which is also expressed in normal breast stem cells, although at lower levels than in breast tumor cells [30,31]. The ectopic expression of Sox2 reduces tamoxifen sensitivity in vitro and in vivo and tamoxifen-resistant cells display increased invasion ability [29]. Furthermore, Sox2 increases the expression of another transcription factor, Sox9, which is also implicated in maintenance of luminal progenitor and breast CSCs [29,32]. Other reports have correlated high levels of Sox2 expression with increased survival, self-renewal capacity, and metastatic outgrowth in other types of tumors as well [33,34,35,36].

We hypothesized that the overexpression of Sox2 leads to changes in the expression of proteins related to breast cancer cell adhesion. Then, in order to determine the adhesion strength of both parental and Sox2 overexpressing MCF7 cells, single-cell probe AFM force–distance measurements were performed for quantifying cell-fibronectin, as well as cell–cell interactions. Through variation in cell–surface and cell–cell contact time, we were able to study the attractive interaction in a time-dependent manner.

We have employed a self-designed setup for AFM single-cell probe force spectroscopy[1] taking advantage of the properties of bacterial surface layer proteins (S-layers) and their antifouling abilities [2][3]. These proteins form the outermost envelope of prokaryotes being the simplest bio-membrane in biology. They are formed by (glyco)proteins (Mw of 40–200 kDa) and show oblique (p1, p2), square (p4), or hexagonal (p3, p6) lattice symmetry with unit cell dimensions in the range within 3–30 nm. In addition, they can self-assemble on a wide range of substrates [4][5][6], which turn them into a unique device for functionalization processes. Particularly, we have used the S-layer protein SbpA from Lysinibacillus sphaericus CCM2177.

Our design consisted of two different glass half-slides joined to each other: One coated with SbpA, from which the cell can be captured; the second one coated with Fibronectin, in order to induce specific MCF-7 cell–substrate interactions. The MCF-7 cancer cells in suspension (either parental or Sox2-overexpressing) were then left to bind from the bulk to the two different surfaces. Hence, unbound MCF-7 cells from the nonfouling side could be subsequently utilized as AFM cell-probe upon attachment to a PLL/fibronectin-modified tipless cantilever brought to contact. Due to this experimental design, based on pre-coated half slides, cells can be placed on top of different samples without any sample replacement being required. This is one of the stronger points in comparison to other setups.

Measurements were performed in cell medium environment at 37 °C by using the JPK (Bruker, Berlin, Germany) custom thermo-regulated flow-cell. Functionalized cantilevers were calibrated before each experiment by means of the thermal tune method. The spring constant of the tipless cantilever was around 0.12 N/m. AFM instrument JPK Nanowizard III (Bruker, Berlin, Germany) with CellHesion mounted on an inverted optical microscope (Axio Observer Z1, Zeiss, Jena, Germany) was operated, after the attachment of the cell, in force-spectroscopy mode. Experimental settings involved constant force (3 nN), constant approach (5 µm/s) and retract (10 µm/s) rates, and varying residence times (0–120 s) or the amount of time the cell stayed in contact. A schematic description of the experiments performed is shown in Figure 1. 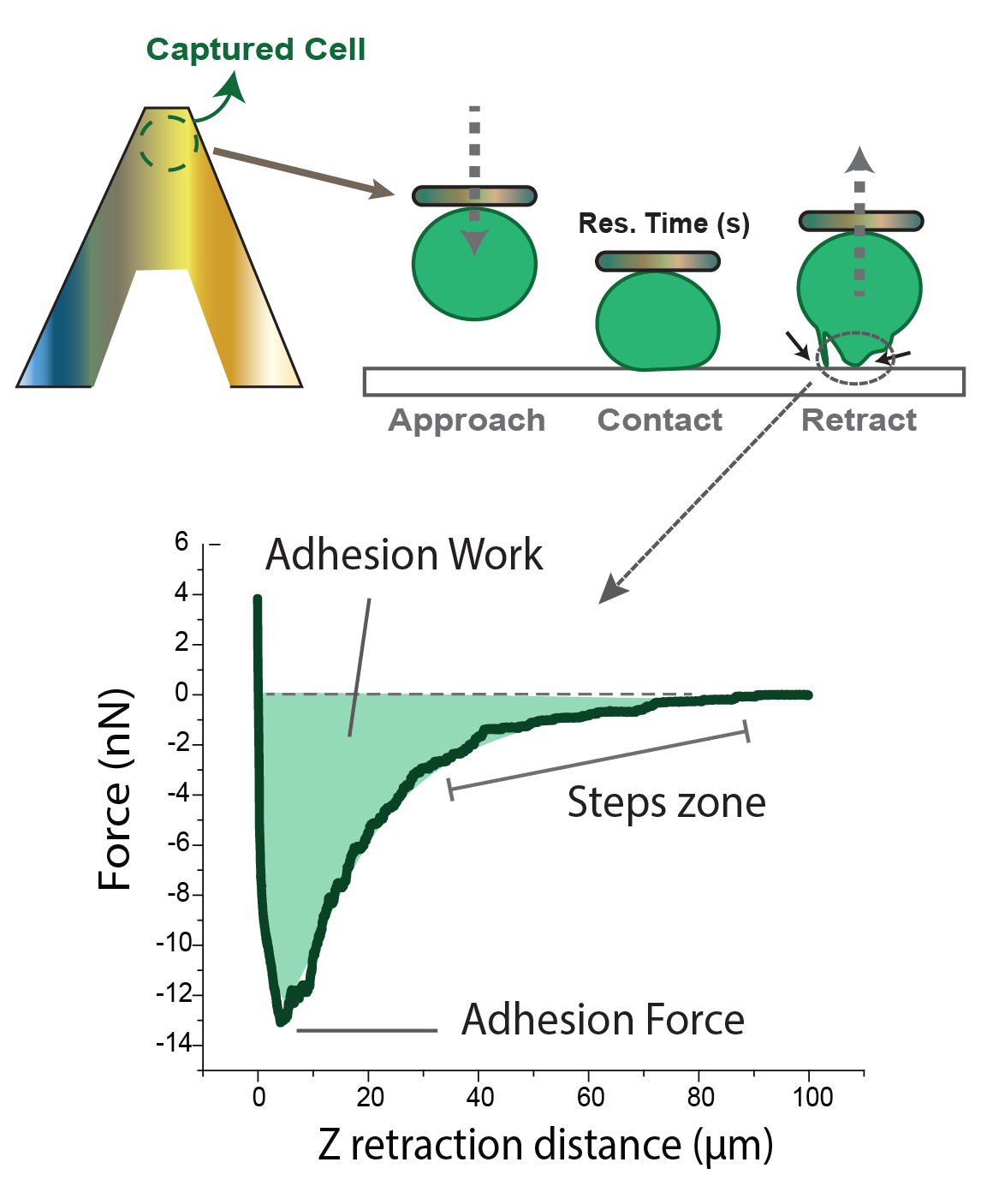 Figure 1. (Top) Schematic drawing of a cell positioned onto a poly-L-lysine (PLL)-fibronectin functionalized cantilever, and a description of a usual Force experiment. The black arrows point at different adhesion events as the cell is detached from the surface. (Bottom) Real retraction force–distance curve derived from such an experiment, following the conditions described at the materials and methods section after 90 s of contact. The analyzed parameters are highlighted graphically: the maximum adhesive force represents the minimum in the force curve, the work of adhesion the area under the curve, and the steps the gradual zero-force recovery pattern.

Cell-probe contact was performed either on different substrates (SbpA or fibronectin) or on other cells (symmetric or asymmetric) since the Z height of the piezo has a range of 100 µm. Experiments exclusively focused on the analysis of the retraction segment, which allowed for obtaining adhesion-related factors (Figure 1 bottom) as the probing cell was moved away (Z retraction distance). These included the maximum adhesion force required to break the contact (minimum in the curve) and the adhesion work required until complete detachment (F = 0), given by the area under the curve. The stepwise recovery trend indicated gradual contact loss. Adhesion Forces appear as negative by definition, since starting positive values correspond to the setpoint force. The axes’ origin (0,0) refers to null cantilever deflection in the retracting motion.

4. Strength and Work of adhesion differ for MCF7 and Sox2-overexpressing cells

The affinity of both MCF7 and Sox2 overexpressing cells towards non-fouling SbpA layers and specifically recognized Fibronectin (FN) films was measured in terms of both maximum adhesion and work of adhesion. It is important to note that, in particular, the work of adhesion relates to the energy required for breaking the contact equilibrium, which might be induced by variations in the cell spreading/wetting of each system or by a tighter membrane–cytoskeleton connection.

Qualitatively, the force–distance curves recorded showed differing adhesion behavior: for Sox2 overexpressing cells, a defined adhesion peak with fast recovery of zero-force could be seen, while the peak appeared to be broadened and smaller for MCF7 cells, suggesting that the maximum adhesive force was highest in cells with elevated levels of Sox2. In general, both adhesion factors force increased significantly for all studied systems when extending the contact time up to 120 s, as shown in Table 1.

Force–distance curves for both symmetric and asymmetric interactions between cells were also analyzed (Figure 2). An increase as a function of contact time between cells was observed, similar to the analysis of cell–substrate adhesion, again following a linear trend after 5 s of contact between cells. 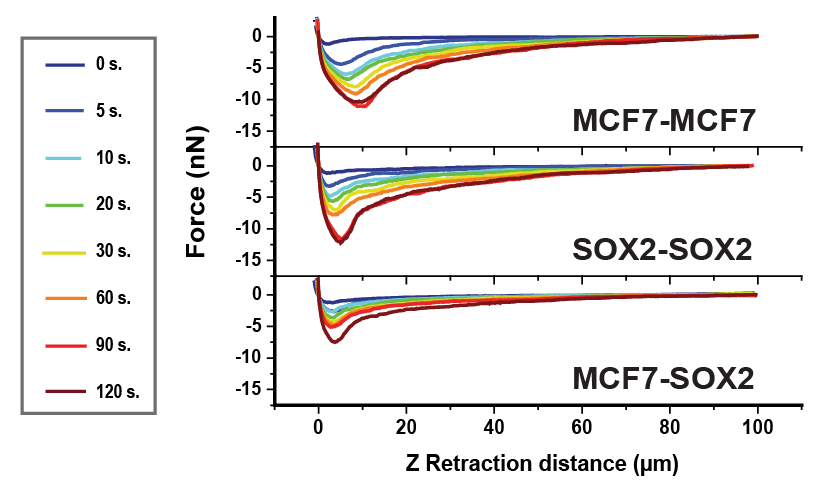 Figure 2. Contact time-dependent averaged force–distance plots for symmetric (MCF7-MCF7 and Sox2–Sox2), and the asymmetric (MCF7–Sox2) interactions for cells on top of fibronectin.

Symmetric cell–cell adhesion was similar for both cell types, but asymmetric measurements showed a decrease of adhesion strength by a factor of 2 to 3. This significant difference likely reflects heterotypic adhesion, suggesting that the two cell lines express different surface adhesion molecules. However, this type of mixed recognition is likely to occur in vivo since intra-tumor heterogeneity has been extensively described in breast cancer.

In any case, from both cell-fibronectin and cell-cell interactions, the increased expression of Sox2 seems to affect cell adhesion. These results also highlight the sensitivity of the technique employed, and its potential application for adhesion-based discrimination between cells.