Endometrial infections are a common cause of reproductive loss in cattle. Accurate diagnosis is important to reduce the economic losses caused by endometritis. A range of sampling procedures have been developed which enable collection of endometrial tissue or luminal cells or uterine fluid. However, as these are all invasive procedures, there is a risk that sampling around the time of breeding may adversely affect subsequent pregnancy rate.

High reproductive performance in production animals such as beef and dairy cattle is vital for achieving optimal per capita return. Endometritis is a common cause of reproductive failure, especially in dairy cattle, causing increases in both calving to conception interval and culling rates [1][2]. Therefore, detection of endometritis in individual cows, before breeding or embryo transfer (ET), is critical.

Histological changes to the endometrium, such as the increased presence of inflammatory cells in subclinical endometritis, can only be detected by cytology or histopathology [3]. Hence, more invasive sample collection methods such as uterine lavage (UL), intrauterine cotton swab (CS) These techniques enable the collection of epithelial and inflammatory cells (CS, UL, CB, and CT), luminal secretions (UL), and endometrial tissue (EB) that allow the inspection of deeper physiological and cellular responses not yet identifiable by routine clinical examinations. The samples obtained can be subjected to cytological examination [4][5], bacteriological culture [6], histopathological examination [7], protein analysis [8], and gene expression analysis [9] to diagnose the status of the endometrial environment. 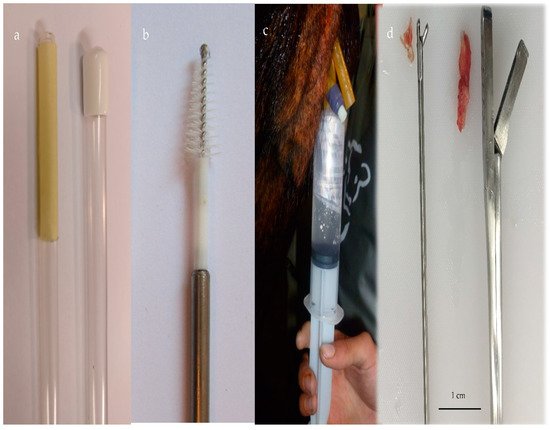 The degree of endometrial injury and trauma varies with the method of sampling from likely to negligible for UL, CS, CB, and CT, to potentially moderate damage when performing EB. EB involves the collection of a full-thickness section of the endometrium, and in some cases a portion of the underlying myometrium (depth of tissue varies from 0.4 to 1 cm) In mares [14] and women [15], endometrial sampling is a routine procedure which does not apparently adversely affect the likelihood of the sampled female becoming pregnant.

Cheong et al. [11] performed a prospective cohort study comparing the effect of UL to collect endometrial cells (n = 705) with no endometrial sampling (n = 1992) studying the reproductive performance of healthy Holstein cows. The selection criteria included primiparous and multiparous cows within 40–60 d postpartum, not inseminated without vaginal discharge or systemic illness. The reproductive performance was assessed during a 210-day period after endometrial sampling. The mean interval from sampling to first service was 19.4 days. In primiparous cows, the PR to first service was lower in sampled cows compared to cows which were not sampled (31.2% vs. 36.5% OR for pregnancy = 1.03; 95% C.I. 0.80–1.33; p = 0.82), whereas in multiparous cows, PR was similar in both groups (29.1% and 28.1% sampled and non-sampled cows, respectively).

In a randomized controlled study, Thome et al. [16] evaluated the effect of collecting endometrial cells by UL in postpartum Nellore cows (50–70 days postpartum). In 35 cows, the UL was performed 4 h after timed artificial insemination, while 93 were not sampled. No significant differences in PR were found between sampled and non-sampled groups (54.2% vs. 56.7%, respectively, p > 0.05).

In a prospective cohort study, Kaufman et al. [17] evaluated the effect of CB sampling the endometrium 4 h after artificial insemination on pregnancy rate to first service in cows calved at least 65 days. PR was similar for sampled and non-sampled cows (43.3% vs. 41.7%, p > 0.05), although significantly higher in primiparous than multiparous cows (54.3 vs. 38.5%, p < 0.05).

In a case-control study, Goshen et al. [18] randomly selected 54 Holstein cows calved approximately 67 days to undergo EB; 157 control cows were paired with sampled cows. The effect of the biopsy on PR to first artificial insemination was calculated using binary logistic regression. The interval from biopsy to first AI was 40.5 days (range 5–111 days). The PR and days from calving to conception in biopsied cows (44.4%; 147.3 days) did not differ significantly from those in control cows (38.9%, 150.8 days).

Perturbations caused after endometrial sampling might induce acute changes in the endometrial environment, but the ability to support embryo development and maintain a pregnancy is recovered. As an indirect indicator of uterine response to artificial insemination [20], changes in uterine blood flow have been measured using color Doppler transrectal ultrasonography. An increase in uterine blood flow was observed within 4 h of the procedure, which returned to baseline by 24 h, indicating that these procedures may induce a short acute inflammatory response. Although previous reports indicate that performing UL induces endometrial irritation caused either by the fluid [21] or by the device [22], studies in mares [23][24] and women [25] have demonstrated that UL did not induce significant morphological changes to the endometrial tissue [26]. Just before artificial insemination, Pascottini et al. collected endometrial cells using CT in nulliparous heifers [27] and multiparous cows [28], and then observed pregnancy rates of 62% and 43%, respectively, which are similar to pregnancy rates reported in non-sampled dairy cows [29]. Similarly, Cheong et al. [11] and Thome et al. [16] performed UL 4 h after insemination without affecting pregnancy rates which is consistent with results in other species such as horses where fertility is not reduced by post-breeding UL [30]. In ET studies, CB sampling one cycle before transfer (74) or collecting UL on day 1 postoestrus during the ongoing cycle [31] did not affect the pregnancy rates after ET. Therefore, it seems likely that recovering endometrial fluid or cells did not adversely affect fertilization and early embryo development but the time of sampling should be considered to allow the endometrial environment to recover after it is disturbed so as to not affect pregnancy outcome.