The evaluation of the neutralizing capacity of anti-SARS-CoV-2 antibodies is important because they represent real protective immunity. In this study we aimed to measure and compare the neutralizing antibodies (NAbs) in COVID-19 patients and in vaccinated individuals. One-hundred and fifty long-term samples from 75 COVID-19 patients were analyzed with a surrogate virus neutralization test (sVNT) and compared to six different SARS-CoV-2 serology assays. The agreement between the sVNT and pseudovirus neutralization test (pVNT) results was found to be excellent (i.e., 97.2%). The NAb response was also assessed in 90 individuals who had received the complete dose regimen of BNT162b2. In COVID-19 patients, a stronger response was observed in moderate–severe versus mild patients (p-value = 0.0006). A slow decay in NAbs was noted in samples for up to 300 days after diagnosis, especially in moderate–severe patients (r = −0.35, p-value = 0.03). In the vaccinated population, 83.3% of COVID-19-naive individuals had positive NAbs 14 days after the first dose and all were positive 7 days after the second dose, i.e., at day 28. In previously infected individuals, all were already positive for NAbs at day 14. At each time point, a stronger response was observed for previously infected individuals (p-value < 0.05). The NAb response remained stable for up to 56 days in all participants. Vaccinated participants had significantly higher NAb titers compared to COVID patients. In previously infected vaccine recipients, one dose might be sufficient to generate sufficient neutralizing antibodies.COVID-19; SARS-CoV-2; neutralizing antibodies; humoral response; long-term kinetics

The revelation of SARS-CoV-2 RNA through a real-time reverse transcription polymerase chain reaction (RT-PCR) from nasopharyngeal swab samples is considered the gold standard method for the diagnosis of acute SARS-CoV-2 infection. Nevertheless, individuals with positive RT-PCR results represent only a limited fraction of all infections, given the limited availability and the brief time window in which RT-PCR testing presents the highest sensitivity [1][2].
The detection of specific antibodies following SARS-CoV-2 infection allows for the evaluation of the seroprevalence, the identification of convalescent plasma donors, the monitoring of herd immunity, the generation of risk prediction models, and is also likely to play a key role in the context of the global vaccination strategy [3][4]. Anti-SARS-CoV-2 neutralizing antibodies (NAbs) are of particular importance because these are the antibodies which inhibit the binding of the receptor-binding domain (RBD) of the surface spike (S) protein to the human angiotensin-converting enzyme 2 (ACE2) receptor. The complex formed between the virus S protein and the human ACE2 is responsible for the virus entry into hosts cells and the inhibition of the formation of this complex may thereby prevent infection and reduce disease severity [5][6]. 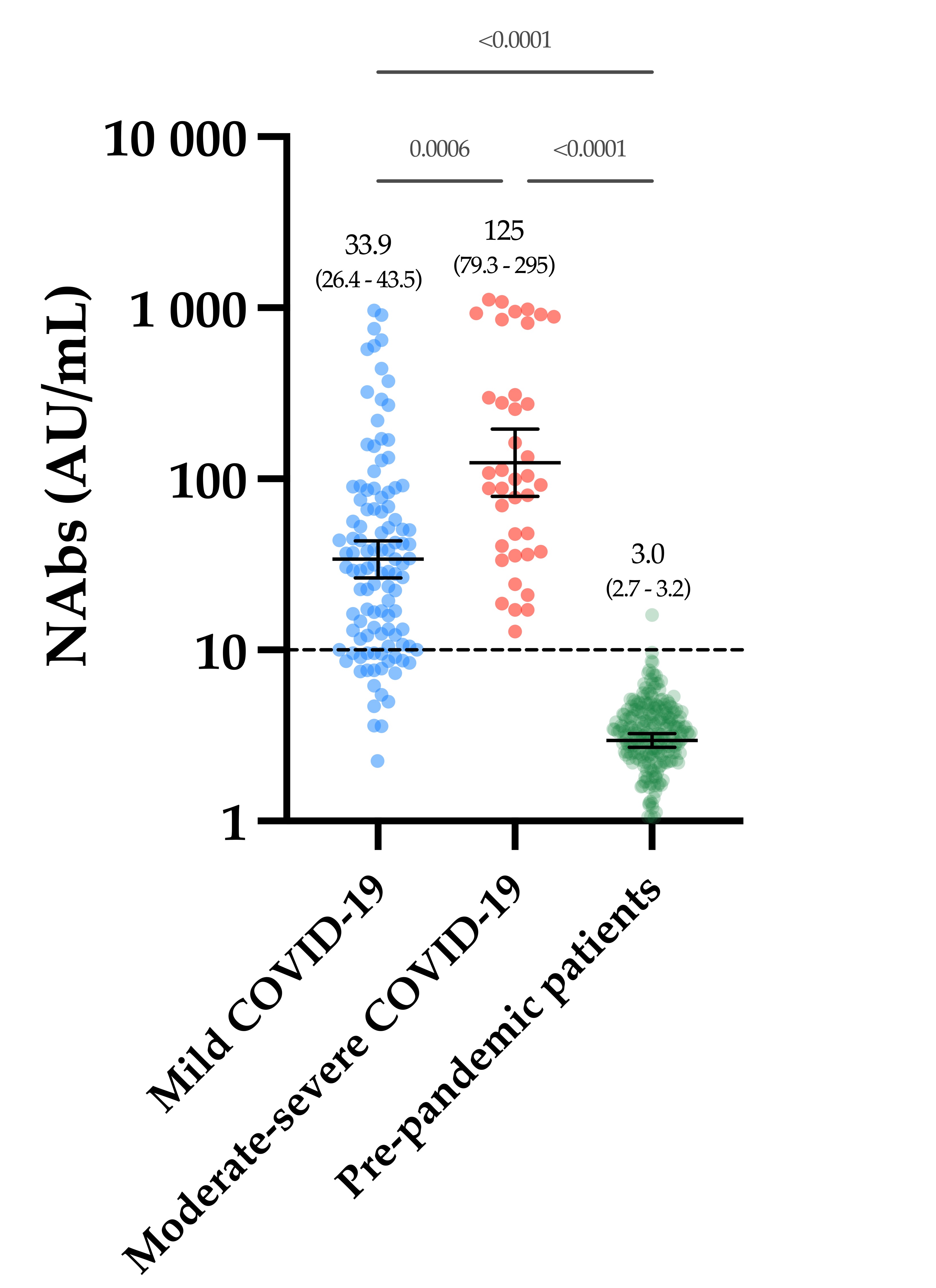 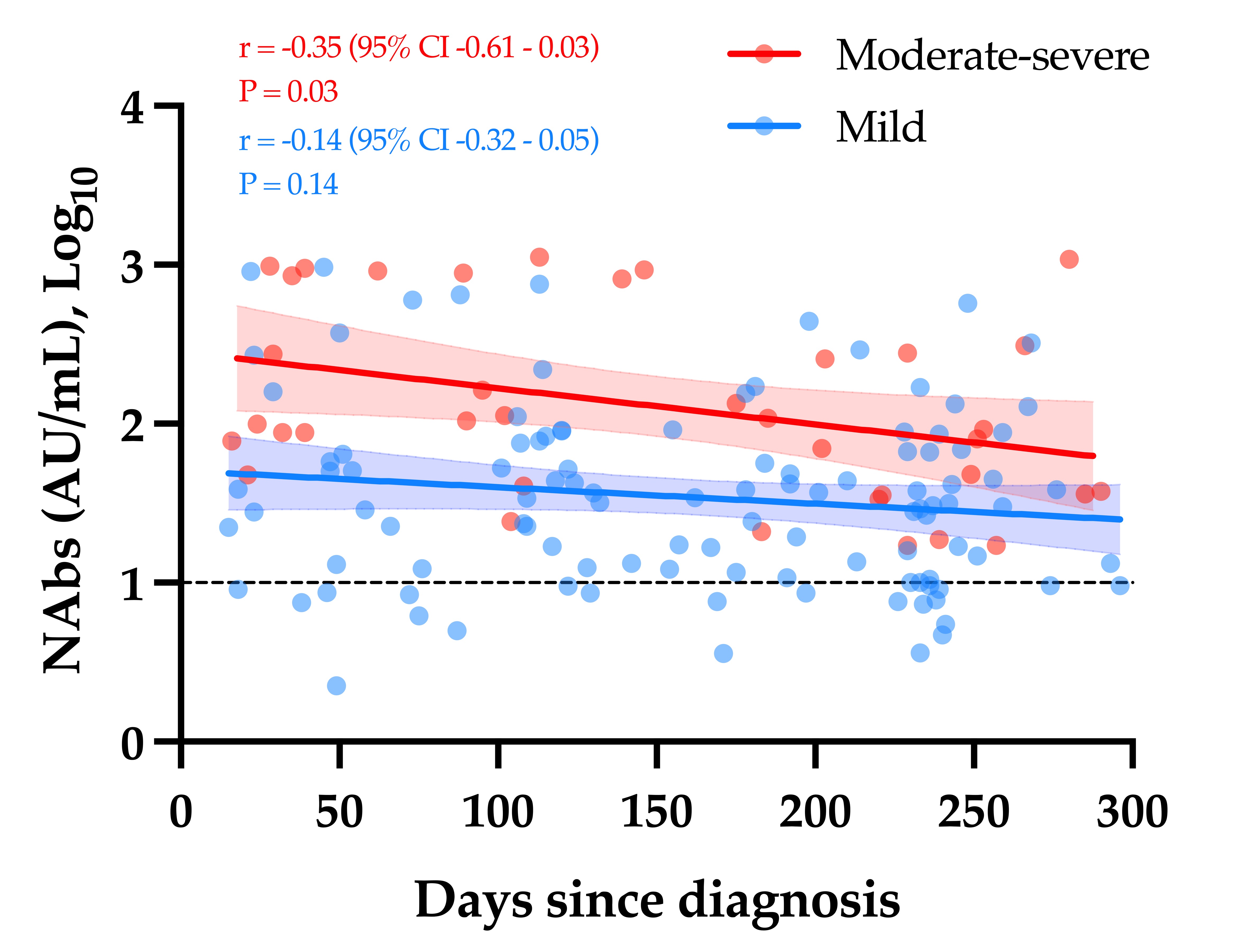 Figure 2. The kinetics of NAbs in moderate–severe versus mild COVID-19 (group 1). The black dotted line corresponds to the positivity threshold of 10 AU/mL.
The correlations between NAbs and SARS-CoV-2 antibody assays is presented in Figure 3. The six assays were significantly correlated to NAbs (p-value < 0.0001). The highest correlation coefficient was observed with the Phadia S IgG assay (r = 0.89) and the lowest one was observed on the Roche NCP assay (r = 0.46). With the exception of the Roche S total and Ortho IgG assays, higher correlations were obtained for IgG assays and weaker correlations for total assays (Figure 3). The agreement between methods was good and ranged from 82.7% to 88.0%. 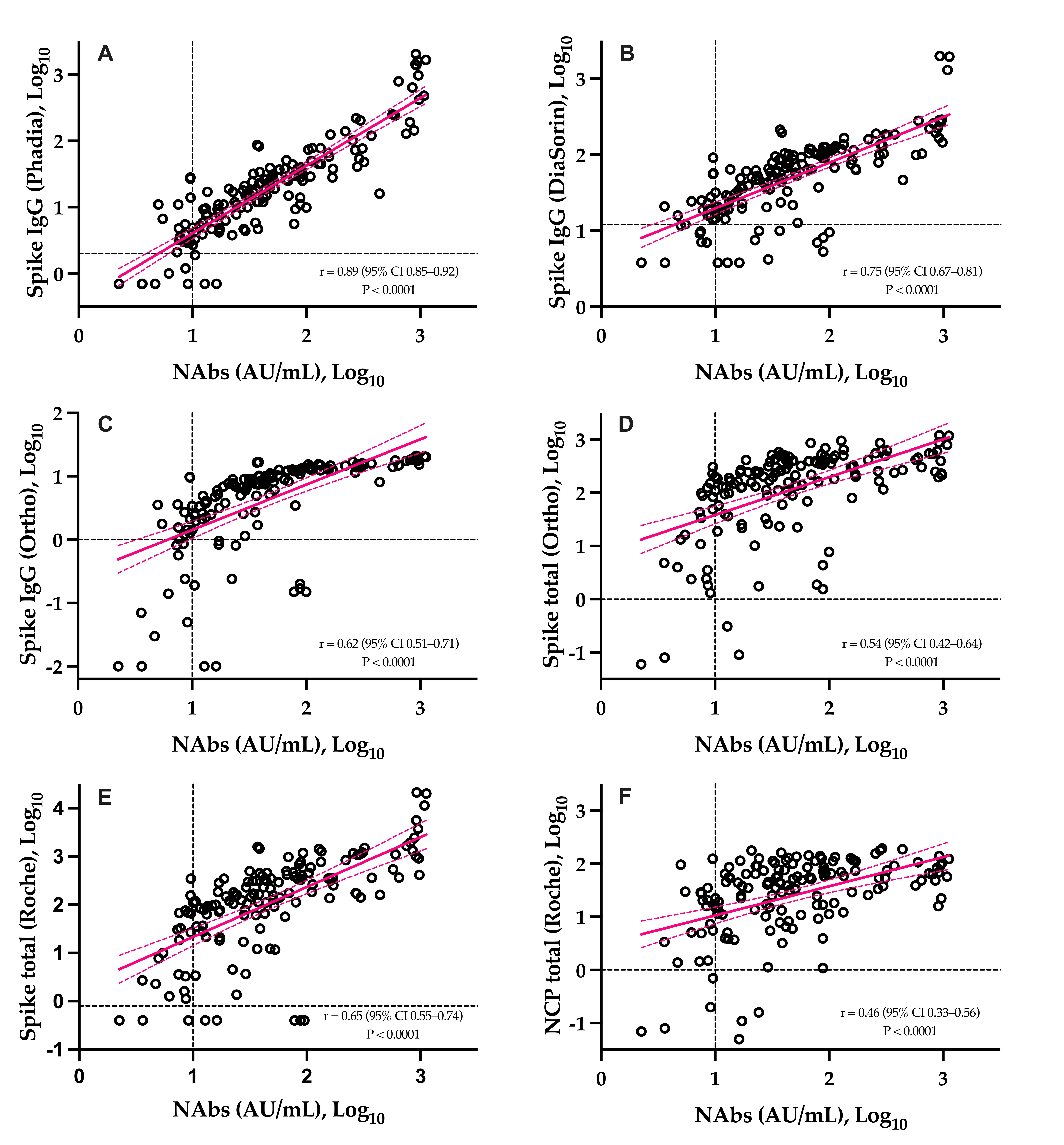 The Figure 4 represents the evolution of NAbs in a group of 90 vaccinated individuals. In uninfected, seronegative individuals (n = 60/90), none had detectable anti-NCP antibodies nor NAbs at baseline. At day 14, the rate of seroconversion after the first dose was 83.3% (n = 50/60) with a 5.1-fold increase of NAb titers. Seven days after the administration of the second dose, a 114.3-fold increase was observed from baseline and all individuals had NAb titers above the positivity threshold. At days 42 and 56, the mean titers were not statistically different from those obtained at day 28 (p-value > 0.99) (Figure 4). 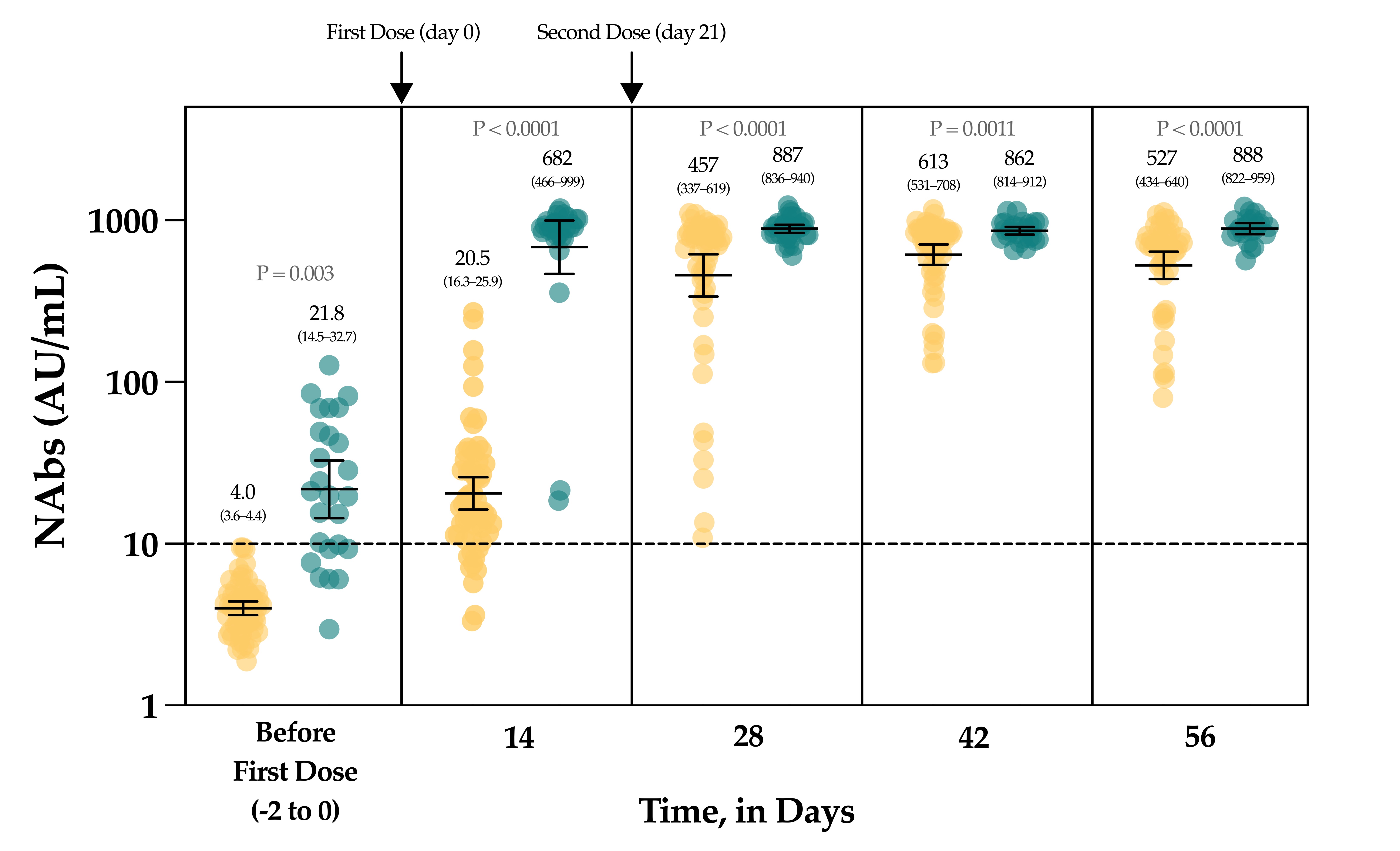 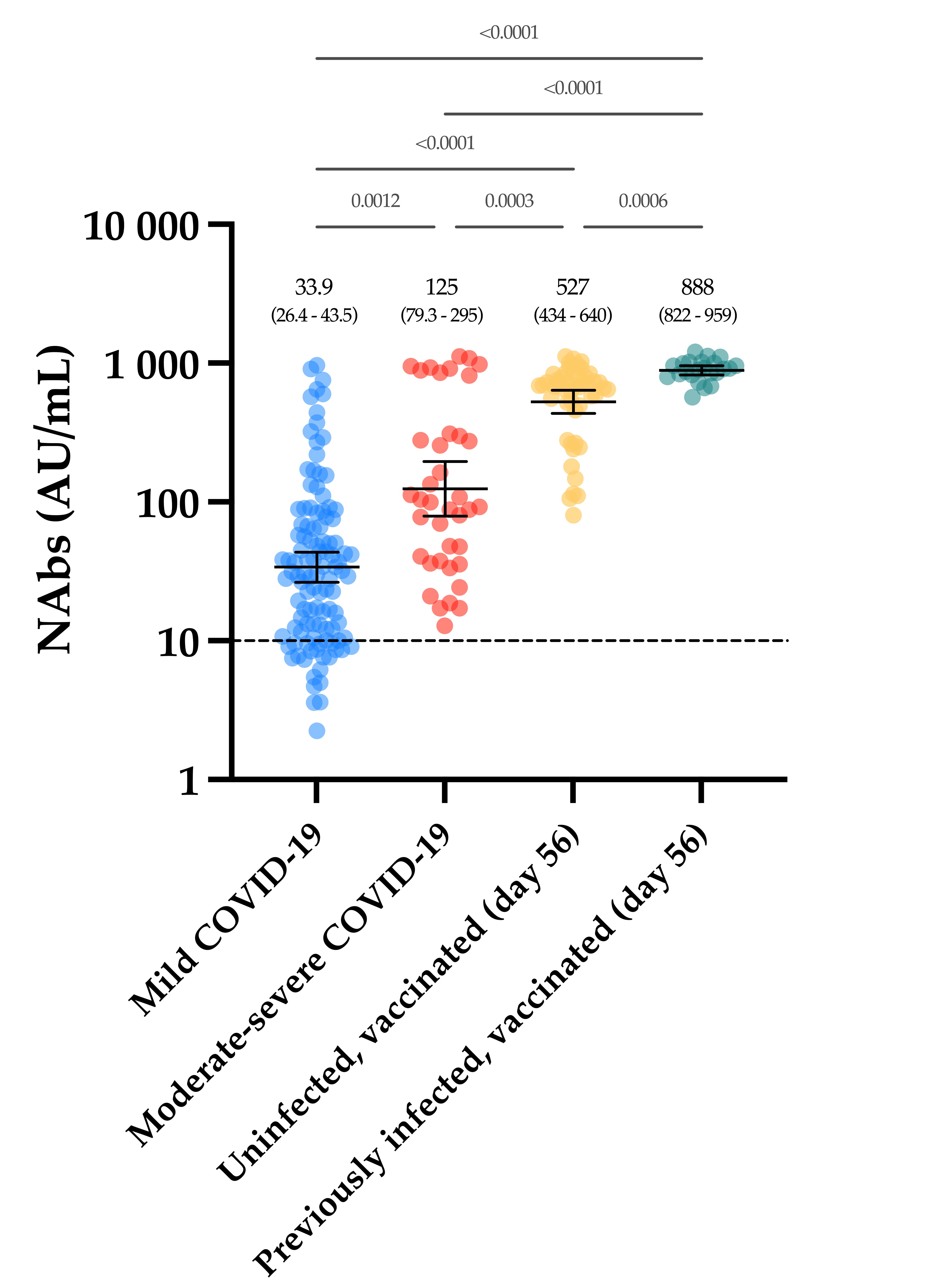 Figure 5. NAb titers obtained in the first group (moderate–severe and mild COVID-19), compared to those obtained in the group of vaccinated participants, at day 56. The black dotted line corresponds to the positivity threshold of 10 AU/mL.