The thymidine analogue 5-bromo-2′-deoxyuridine (BrdU) is a pyrimidine 2′-deoxyribonucleoside compound having 5-bromouracil as the nucleobase. This agent is permanently incorporated into the DNA during the synthetic phase of the cell cycle. It has been argued that gene duplication, DNA repair or apoptotic cellular events might contribute to BrdU labeling in vivo.

The thymidine analogue 5-bromo-2′-deoxyuridine (BrdU) is a pyrimidine 2′-deoxyribonucleoside compound having 5-bromouracil as the nucleobase. This agent is permanently incorporated into the DNA during the synthetic phase of the cell cycle. It has been argued that gene duplication, DNA repair or apoptotic cellular events might contribute to BrdU labeling in vivo. Therefore, this marker is considered as an indicator of DNA synthesis and not the capacity to divide [1][2][3].

The random incorporation of this agent into the DNA disturbs its composition and sequence and, therefore, BrdU presents in a myriad of negative effects because its toxicity affects the number and distribution of tagged cells [3][4][5][6][7]. On the other hand, a way to study, in humans, the process of generating neurons from adult neural precursors is to detect, in the same tissue section, specific antigens for cell proliferation and doublecortin-reactive cells. The controversy is generated when BrdU-immunoreactive cells can be explained by processes not associated with cell division (DNA repair or apoptotic events) and doublecortin-stained cells do not present substantial proliferative activity. Thus, a slow and delayed development of young neurons may replace neurogenetic processes in the adulthood [8][9].

I show here the results of my research indicating that the effect of the incorporation of BrdU into newly synthesized DNA may lead to inaccurate results. In the first of these, it was studied whether a single injection of BrdU at doses ranging from 25 to 300 µg/g, modifies the development of the cerebellar neuroepithelium. In the second, it was compared the effects of a single-dose of BrdU, at doses ranging from 50 to 300 µg/g, on cell cycle parameters and phase durations in the cerebellar external granular layer neuroblasts. ([3H]TdR) labeling, it was determined whether the administration of several doses of both markers, by a progressively delayed cumulative labeling method in utero, modify the developmental timetables and neurogenetic gradients of PCs and DCN neurons.

2. Effect of Bromodeoxyuridine Exposure on the Cerebellar Neuroepithelium

These observations deserve attention because other data from the literature have been reported that the administration of BrdU affects the cell cycle progression of neural stem cells [10]. In addition to that, when injected in the prenatal life, low doses of BrdU compromise the number and distribution of spatial distribution of cells in the cerebral cortex of monkeys [3]. Moreover, there are also proofs revealing that the administration of this marker in utero alters neuroblast proliferation, migration, and patterning of the cerebellum [6][7]. In this section, evidences are presented indicating that high doses of BrdU interferes with cell proliferation and promotes apoptotic cellular events in the neuroepithelium.

Pregnant rats were injected at embryonic day (E) 13 with a single dose of saline or BrdU at doses ranging from 25 to 300 µg/g. Embryos were removed by caesarian at regular intervals from 5 to 30 h after agent exposure. To determine the effect of BrdU administration on cerebellar neuroepithelial cells several parameters were quantified: (I) density of mitotic figures, (II) BrdU, and (III) proliferating cell nuclear antigen

On the other hand, to discover whether BrdU-injection leads to apoptotic degeneration, the density of terminal deoxynucleotidyl transferase dUTP nick-end labeling (TUNEL) and active caspase-3 were quantified. Transmission electron microscopy was carried out to confirm apoptotic cell death. Results showed that, in comparison to saline injected rats and irrespective of the analyzed survival times, the density of TUNEL-positive and caspase-3 reactive neuroblasts were similar in animals exposed to doses of BrdU ranging from 25 to 75 µg/g of BrdU (Figure 1). When doses of 100 to 300 µg/g of BrdU were considered, the density of these parameters increased, indicating that high doses of this brominated thymidine led to the activation of apoptotic cellular events (Figure 1). 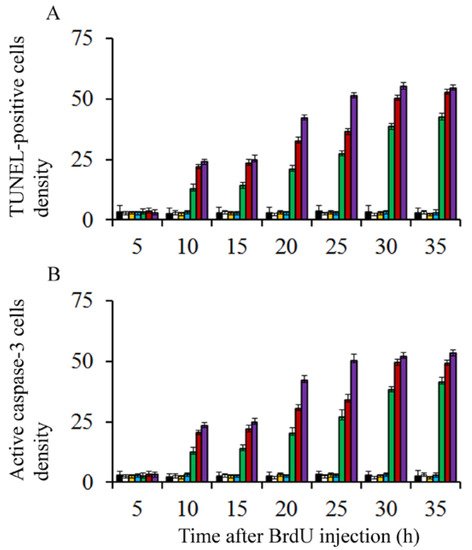 In order to verify the apoptotic state of neuroepithelial cells, neuroblasts treated with saline of BrdU (100 to 300 µg/g) were examined with the transmission electron microscopy (TEM). The earliest ultrastructural alterations were the presence of nuclear chromatin clumps of high electron density in close contact with the inner nuclear envelope. Another important feature was the presence of clusters of approximately round electron-dense apoptotic bodies containing very condensed dark chromatin masses. In some cases, the apoptotic bodies were broken, and their content extruded into the cytoplasm (Figure 2). 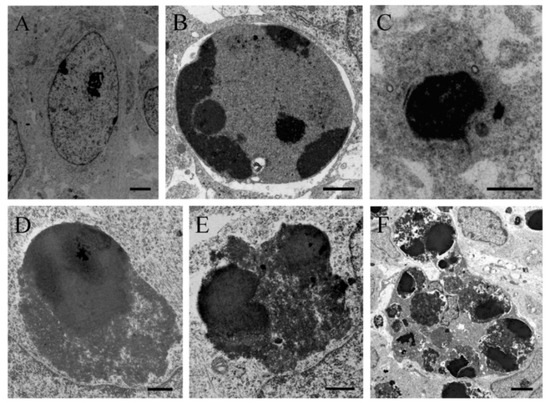 At least, two observations follow from these data. (I) A single low dose of BrdU (25 to 75 µg/g) alters neither the cell-cycle progression nor promotes apoptosis, and (II) high doses of BrdU (100 to 300 µg/g) during the early prenatal life activates apoptotic cellular events, leading to an important depletion of neuroblasts.

In most of the vertebrates, this structure increases in thickness during an initial period of time as a result of proliferative activity of its neuroblasts [11][12]. This is because BrdU inhibits cancer cell proliferation both in vitro and in vivo [13][14][15]. It has been reported that this agent alters cell cycle dynamics in neurosphere cultures derived from adult rat brain [5]. In this section, evidences are provided revealing that, at postnatal day (P) 9, a single high dose of BrdU interferes with the cell cycle progression of the EGL neuroblasts.

Rats were injected with BrdU at doses ranging from 50 to 300 µg/g. In the second, animals were sacrificed 1 h later, and at regular intervals from 2 h to 26 h (spaced at two-hour intervals) following BrdU administration. The labeling index (LI) was determined as a percentage of BrdU-stained interphase nuclei per total number of scored EGL neuroblasts. The duration and phases of the cell cycle were inferred from the graphic representation of the percentage of BrdU-reactive mitoses plotted as a function of survival time after agent injection [16][17][18].

Figure 3 summarizes, in rats injected with BrdU at doses ranging from 50 to 300 µg/g, the variation in the frequency of labeled neuroblasts after different survival times (from 0.5 to 2 h). Data analysis indicated that, from 0.5 to 2 h after marker injection, the LI was highest using 50 µg/g of BrdU. It was followed by 100 and then by 200 µg/g. Does of 300 µg/g provided the lowest values. 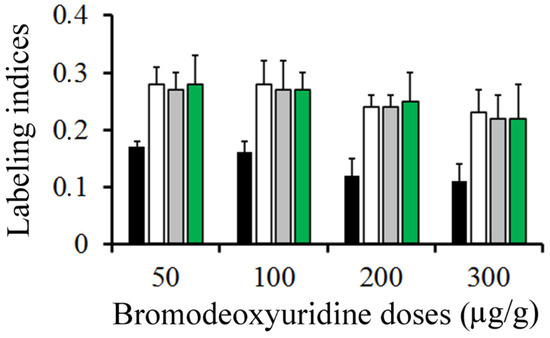 Figure 3. Mean values of labeling indices in the external granular layer. Animals were sacrificed at 0.5 (black columns), 1 (white columns), 1.5 (grey columns), and 2 h (green columns) after a single injection of bromodeoxyuridine at doses ranging from 50 to 300 µg/g.

Incorporation of BrdU into proliferating neuroblasts labels a cohort of asynchronous cycling cells in S-phase. Phase durations and cell-cycle length of the EGL neuroblasts can be quantitatively examined from the rhythmic appearance and disappearance of labeled mitotic cells. The variation that took place in the fraction of labeled mitoses from 1 to 26 h after BrdU exposure is indicated inFigure 4B. Current results denoted that different doses of BrdU affect the parameters used for estimated the time required to complete the entire cell cycle. 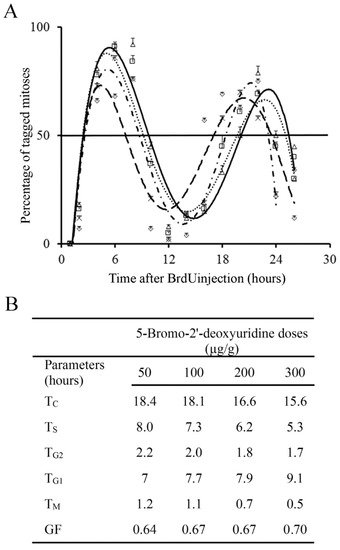 One fact emerges from these experiments. A single dose of 50 µg/g of BrdU has no apparent harmful effects on the cell cycle progression, which suggest that this dose is appropriate, and it provides accurate results. Higher doses (100 to 300 µg/g) altered the detection of BrdU-immunoreactive cells. As the duration and phases of the cell cycle are inferred in accordance with BrdU detection, an effect on this detection can render the measurement of the cell cycle inaccurate.

4. Inferring Purkinje Cells and Deep Cerebellar Neurons Developmental Timetables with Bromodeoxyuridine or Tritiated Thymidine. What Is the Most Suitable Marker?

BrdU and tritiated thymidine ([3H]TdR) are two markers of DNA synthesis. They have produced important insights into the neural mechanisms of the central nervous system development including cell kinetics, neuron production and migration [16][19][20][21][22][23]. For example, both BrdU and [3H]TdR produce cytotoxic and teratologic effects when high doses of these are supplied [6][24][25]. BrdU can rapidly be revealed by immunohistochemical procedures, whilst [3H]TdR autoradiography is more expensive, requires a special laboratory and it takes a lot of days to develop a picture.

Previous reports have indicated that, in the cerebral cortex of macaque monkeys exposed to either BrdU or [3H]TdR as embryos, quantitative differences in the number and placement of tagged neurons exist [3]. In this section, proofs are presented indicating that repeated injections of BrdU produce, in comparation with several [3H]TdR administrations, systematic differences in the pattern of PCs and deep neurons neurogenesis as well as in spatial location of these macroneurons.

To study the generation and spatial location of rodents PCs and DCN neurons, both markers were administered following a progressively delayed cumulative labeling method [6][22]. This method consists of injecting pregnant dams with BrdU or [3H]TdR in an overlapping series in accordance with the following time-windows: Two doses were administered on consecutive days [26][27]. DCN neurons were studied in the fastigial, interpositus, and dentate nuclei.

Variations in the percentage of tagged neurons after different labeling times with BrdU or [3H]TdR are shown inFigure 5 and Figure 6 for PCs and DCN neurons, respectively. It is observed that, in each time-window and in each cerebellar compartment, the proportion of [3H]TdR labeled PCs is higher that the percentage of BrdU tagged PCs. Similar results were obtained when DCN neurons were taken into account. 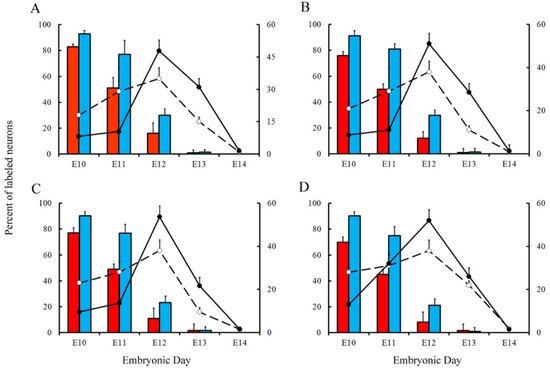 In a subsequent study, the neurogenetic timetables of PCs and DCN neurons were built. 7(for DCN neurons), the percentages of produced neurons are plotted against the time. My results have revealed that, with the exception of medial hemispheres at E11, more BrdU than [3H]TdR labeled PCs are produced on embryonic day 10 and 11 in the remain studied areas. However, when frequencies of newborn macroneurons were inferred from E12 to E13, more PCs were produced when the radioactive precursor was used.

There is evidence indicating that PCs and DCN neurons are distributed throughout the cerebellum according to precise neurogenetic gradients [28]. By examining the above-inferred times of neuron origin, it is possible to classify PCs and DCN neurons among those produced from E10 to E11 (early-born) and those generated from E12 to E14 (late-generated). andFigure , the proportions of each population fractions are compared for BrdU and [3H]TdR. My results have shown that, in the analyzed cerebellar compartments as well as in each deep nucleus, proportions of early-produced BrdU-reactive cells were always higher than percentages of neurons tagged with [3H]TdR. The opposite pattern was found when late-produced neurons were studied, revealing that significant differences in the settling pattern of PC and DCN neurons exit depending on whether BrdU and [3H]TdR are used.

It can be drawn as a general conclusion that, in comparison to several doses of [3H]TdR, to infer neurogenetic timetables and neurogenetic gradients using several doses of BrdU is less accurate. The incorporation of this marker into DNA produces base pairing of the bromouracil with guanine instead of adenine. This substitution is involved in mutations and breaks in double-stranded DNA leading to detrimental effects on the differentiation and survival of neuroblasts [5] and on neuron fate and function [3][29][30]. Therefore, as suggested by Duque and Rakic [3][4], DNA with [3H]TdR possibly reflects closer DNA in the non-injected animal.