Reverse osmosis is the leading technology for desalination of brackish water and seawater, important for solving the growing problems of fresh water supply.

Although about 70% of the Earth’s surface is covered by water, just 2.5% is fresh water [1], and it is estimated that only 1% of this is easily accessible [2]. 40% of the world population currently lives in arid areas or islands where fresh water is scarce [3]. Additionally, an increase of droughts worldwide, resilience reduction to climate change from conventional water resources, and overexploitation have increased dependence on desalination technologies, whose implementation is affected by economic, environmental, technical, social, and political factors [4]. Recent inclusion of water in the stock market is an example of the challenges to be faced in the 21st century. It is estimated that by 2025 two thirds of the world population will face shortages of this resource [5], for which governments must establish functional policies addressing social concerns on water access by the poorest communities [6], while guaranteeing the resource for industrial and household purposes.
The 2030 agenda of the United Nations seeks to: “guarantee availability and sustainable management of water and sanitation for all” [7]. Different water management strategies, along with decarbonized desalination and improvement of irrigation systems, are key elements to achieving this goal of sustainable development [8]. There is a wide diversity of technologies for desalination and treatment operations for distinct water types. Energy consumption is shown in Table 1 according to the used type of source. Reducing energy consumption is one of the focuses of researchers [9].
Table 1. Energy consumption for different water sources.
Source: Reproduced from [10][11][12].
Seawater and brackish water desalination is one of the most promising processes to solve the world’s water shortages. Its use has increased 6.8% per year in the last decade, equivalent to an annual addition in fresh water production of 4.6 million m3/day and, although plants with the highest capacity are scarce, they contribute to most of the installed capacity [14]. According to the International Desalination Association (IDA), desalination plant capacity in the world reached 99.8 million m3/day in 2017, with some 18,500 plants installed in 150 countries [15]. In China alone, some 142 plants operating with seawater were installed during 2018 [16]. Between January 2019 to February 2020, some 155 new plants were put in operation, increasing the installed capacity by up to 5.2 million m3/day [14].
A total of 61% of the world’s installed desalination capacity corresponds to seawater, while 30% to brackish water. Moreover, 62.25% is used for municipal purposes and 30.2% for industrial use. The Middle East and North Africa contribute 47.5 % to the installed capacity, while East Asia and the Pacific add up to 18.4%, and North America, 11.9% [17][18]. It is estimated that the world desalination market will grow at a speed of 9% in the coming years. 74% of this growth will come from Europe, the Middle East, and Africa [19].
Currently, more than 20 different technologies are used for seawater desalination [20]. Nonetheless, only a handful of these dominate global water production. Commercial desalination processes are grouped into three broad categories: thermal processes, membrane separations, and emerging technologies. Within thermal processes, multi-effect distillation (MED) and multi-stage flash distillation (MSF) stand out. Reverse osmosis (RO) is the dominant technology [16] in membrane processes, while multi-effect desalination (MED) covers 7% of the installed capacity, and multistage flash systems (MSF) cover 18%, being the most used technology in large-scale dual-purpose desalination plants (water and electricity). On the other hand, RO technologies are more used at the middle and small scale in single process plants (fresh water production) [9], being the ones with the highest participation with 69% of the installed capacity in the world. Other membrane technologies such as nano filtration (NF) contribute 3% to desalination, while electrodialysis (ED) 2%, and reverse electrodialysis (EDR) 1% [18]. In the Middle East, thermal desalination technologies continue to be overriding, due to their integration with power plants and useful life of more than 30 years [21]. Hybridization of thermal desalination technologies with renewable energy sources is one of the trends in research and development that seeks to improve the sustainability of these processes [22].
Other emerging technologies such as capacitive deionization, freezing, humidification-dehumidification, and desalination with gel hydrates are in the preliminary stages of research and development, and have not reached enough maturity for extensive use. Ultrafiltration, nanofiltration, and ionic filtration are often used as technologies for pre- and post-treatment processes [10][14], being used in small-scale plants and providing less than 2% of the installed capacity in about 940 plants around the world, mainly of electrodialysis and reverse electrodialysis [17]. Electrodialysis is used in industrial applications for selective removal of ions and for brackish water desalination [23]. Desalination through carbon nanopores, inspired by biological aquaporins, is found in a laboratory phase and is a promising technology for desalination [24].

The first RO desalination process was marketed by Loeb & Sourirajan in 1964 [21]. Since then, it has had important advances that have positioned it as the leading technology in desalination operations. It is versatile, thanks to the fact that water evaporation is not necessary for its separation. It has a relatively low energy consumption compared to thermal technologies [25][26], has high flexibility to work under different salinity conditions, takes up little space, and is easy to operate and automate [27][28]. Installed capacity in RO plants is currently more than 60 Mt/day, with an annual growth between 10% and 15%, and a combined energy consumption of 100 TWh/year [29]. RO units are commercially available in varied sizes, from household applications with capacities of 0.1 m3/day, to sizes for industrial and municipal use with capacities of up to 900,000 m3/day [30]. Figure 3 shows a representation of the rolled membranes in common use for seawater desalination processes. 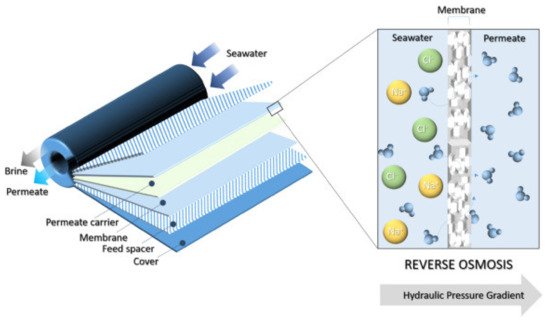